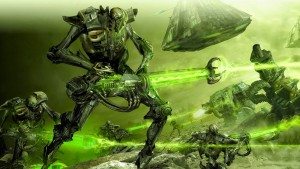 Welcome to another wild and woolly Necron Codex review by the ever lovable Goatboy.  This time I am talking about the most expensive Lord of War option in the Necron Codex – the Tesseract Vault.  I’ve already talked about the C’Tans so I figured I would complete the slow lap of why choices in the Necron codex.  As usual you can find more tactics at the Tactics Corner.

As the title states this is all about the expensive hunk of plastic known as the Tesseract Vault.  Most of the time when you see one you question why the player didn’t just make 2 units with the Obelisk and the Transcendent C’Tan the kit comes with.  Still, while I find the overall rules of the model lacking I have thought of goofy ways to use this guy – especially if you prefer to cause havoc instead of really crushing your opponent’s wargaming soul.

Basically you shove a Transcendent C’tan into a Necron Obelisk, remove some of the floating pyramid of dooms rules, add a beefed up set of C’Tan rules, and then mix in some explosives you get what this model basically does.  This is another Super Heavy skimmer for the Necron book so it has all the Super Heavy rules as well as some nifty extra bits of bullet mayhem in a supe’d up set of C’Tan Attacks.  Overall I would say this is one of those big splashy units that might not do a ton but look pretty cool on the table top. 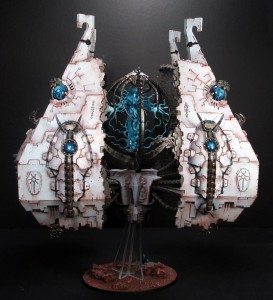 The Vault has 4 Tesla Spheres and a pretty mad C’Tan in the middle of it.  The Spheres 24″ Str 7 Ap – Heavy 5 Tesla weapons which can be pretty gnarly when they just go crazy with the 6’s.  It also has a C’Tan which has a set of increased power, random C’Tan attacks you can read about in the special rules section.  Overall it costs the same as a Transcendent C’Tan and an Obelisk with added in damage potential and a fat behind with 9 hull points.  It is Armor 14 all around so it is a pain for many things to get through.  A ton of Melta isn’t even that much of a threat as it has 9 hull points.

As a Super Heavy Vehicle it can a lot of interesting stuff like Thunder Blitz, moves 12 inches, can shoot all its guns and target different things with each of it’s weapons.  Even the C’Tan powers shoot at the normal BS 5 that a C’tan normally throws around.  It also has an extra bit of special in that when it explodes – it blows up as big as you can go.  This is what makes it interesting as you can just get so aggressive with it that you are begging your opponent to blow it up.  Here is a run down of it’s C’Tan Powers.

4 – Sky of Falling Stars – 48″ S 7 AP 4 – Assault 6 Apocalyptic Barrage – This is the annoying Blast Template that has a bunch going random all over the place.  Still if this was AP 3 man this model might see play.

6 – Transdimensional Thunder Bolt – 48″ S 9 Ap 1 – Assault 2 Tesla – The Range helps this out as well as having 2 shots.  Still I don’t expect Tesla to happen so it isn’t nearly as neat as you would want it to be.

I have fought against a Necron Obelisk so I do know the Tesla Spheres are legit weapons systems.  I like that it has more Hull Points and all of its weapons are good.  I do wish we could roll a 2d6 and pick the one we want for the C’Tan powers, though, but hey, all of them are good. This would go a long way into making this unit a better option.

I could see this as a big model to push towards your opponent and threaten them with its ability to explode as well as throw out a ton of annoying shots.  While random things can be fun – having a “shooting” attack that has each variable so different from the other options makes this a hard unit to utilize – especially when it almost takes a third of your points to even throw into your army.  Plus the model isn’t exactly cheap and looks somewhat fiddly to move around and keep from crunching up.  Overall I don’t expect to see it and hopefully won’t get beat by it in the near future, haha!  Knowing my luck it will kick the crap out of me just like the Obelisk did in the last Wargames Con I played.

In all though, this is a big, expensive model that hits decently hard, is tough to kill and looks cool, but is honestly not the most efficient use of your points. Play it because it looks cool if you choose to play it!