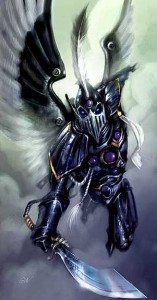 Goatboy here again and this day we start on the a new journey of reviewing with the Eldar Codex.  I grabbed me a few random set of units and formations and the first one I want to chatter on about is one the Living Legends himself – Baharroth.  He is the Swooping Hawks Phoenix Lord and a lynchpin to some of the newer Eldar Deathstars we see gracing the table top.  As usual you can read more tactics at the Frontline Gaming’s Tactics Corner.

Baharroth, besides looking great in that formfitting body armor, is one of the better “force multiplier” Phoenix lords out there.  He has a plethora of good rules, good equipment, and a very cheap point cost when you compare them to the other Lords.  He isn’t the most offensive of the lords but his large amount of special rules makes him a strong choice in those Eldar Deathstar armies. 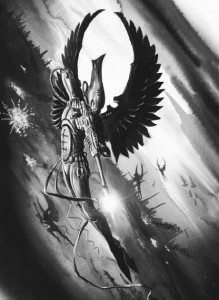 Baharroth is normally used as a glue type of HQ character that grants a bunch of useful USR’s into a unit that would normally never have them.  I have seen him used in Seer Councils, Wraithgates, and other Friendly Eldar Stars that need to have Hit & Run, Fearless, and a lack of scatter when coming in via Deepstrike.  He can also randomly get to just about anywhere on the board for this last turn, grab the objective and hope it ends to win the game rolls.  Stats wise he is a powerful Eldar warrior with heighten Strength and Toughness (Both 4).  He is also an ancient warrior so his BS and WS are both extremely high (7).  Since he is a Space Elf he is extremely fast too with an Initiative of 7.

This guy has a ton of Wargear.  In fact – it is just easier to list them with a little blurb about it.

Phoenix Armor – Hey this is how he gets that awesome 2+ armor save.

Plasma Grenades – Assault grenades so I don’t lose my speed when I come get you in those rocks!

Grenade Pack – Swooping Hawks Jump in the air and throw down grenades. 24″ Str 4 AP 3 Large Blast, Assault 1, Ignores Cover, Skyburst – All the rules will be with the Swooping Hawks so yay!

Swooping Hawk Wings – Basically crazy Jump pack that goes 18′ instead of 12′ and you can leave the table and skyleap if you are not stuck in combat and go into ongoing reserves.

The Shining Blade – CCW that is Str User – Melee, Blind.  Its cuz he is so pretty and brings all the light to your life as he kills you.

That is a ton of wargear on an HQ character and he doesn’t even hit 200 points.  This isn’t even going into the other Nutty stuff he has with his Special rules that just makes him one of the most Useful Phoenix lords for a discounted price. 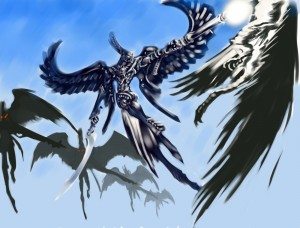 Just like his set of Wargear it is just easier to list out his special rules with a little blurb on what it is or how good it is.

Warlord Trait Falcon’s Swiftness – He always adds 3 to his run movement if he is the Warlord in your army.

Ancient Doom – He is an Eldar guy so he has to have it.

Battle Focus – I can Move like really fast! Run and shoot or shoot and run.

Eternal Warrior – Oh yeah – the start of the special Sauce.  His guy can take a laser through the chest and keep on ticking.  He still doesn’t like the D though.

Fearless – man this guy has been reborn so many times so he doesn’t fear anything cuz he will always come back.

Herald of Victory – More like Herald of gating where ever I want to be dangit.  He doesn’t scatter when he deepstrikes in.  So yeah – WraithGate is a thing.

Hit & Run – Probably the strongest USR in the game right now.  I really wish every model had to have it to use it – but it is what it is.  Very very Good.

Independent Character – Look you ain’t my dad and I can do what I want.  That’s right I will just hang out with my Dark Eldar friends if I want too even though they creep me out.

If you haven’t figured it out – his cost plus Fearless and Hit & Run makes him a great add on to any Eldar based Star of doom.  He also helps set up the whole Wraithgate combo utilizing Wraithguard with D Scythes or Wraithcannons, The Gate Power, and his ability to make sure they stick around without using Dark Eldar.

I already talked a little bit about this in the Wargear and Rules breakdown but Baharroth is a glue character.  He adds a bunch of extra rules to a unit that help either keep the unit more survivable or allow them to do as much damage as they can all the time.  He does this by granting Hit and Run which keeps a unit safe from getting locked down and can activate a none scattering combo to utilize a deadly shooting unit such as Wraith Guard.  His point cost, while higher then other HQ choices, he is still lower then all the other Phoenix lords so he is easy to add into armies.  With the changes to the overall army build make it is easy to utilize 2 Eldar Cads and then either a Formation to create a very effective combo star that is there to kill just about any unit on the table.  Plus he can randomly be annoying by himself as he sky leaps all over the table and throwing down templates or grabbing objectives.  If your army doesn’t have a ton of Objective Secured he can easily contest an objective with his pinpoint deep striking ability.

Alternatively, you can take him in the Eldar War Host detachment, in the Living Legends slot. He gains Matchless Agility, which gives him an automatic 6″ run, making him even faster, which is crazy!

He’s also a good skirmisher. He can reliably hunt the backfield by himself, killing MSU and support units. While he doesn’t hit SUPER hard, he’s durable and punchy enough to kill weak units fairly easily.