Noah Brings his Big Mek Stompa to a Tournament!

You are here: Home › 40K › Battle Report › Noah Brings his Big Mek Stompa to a Tournament! 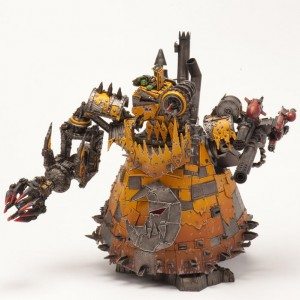 Hello everybody my name is Noah and I am here to give you my first tournament experience using the newly ITC approved Mek Boss Buzzgob’s Big Mek Stompa! Check out the Tactics Corner for more great articles.

Just to give a little background about myself I have been playing in the tournament scene since 2012 and have, for the most part, been a dedicated Ork player. I’ve only attended a few events including: Duel Con 1 and 2, BAO 2012 and both years of the LVO.  I’ve never really placed very high in any of these tournaments but I do try to write competitive lists using Orks without sourcing to other books. The tournament that I just attended was an ITC sanctioned event at Hat’s Games in Tucson, AZ. This was the first ITC sanctioned event in Tucson, that I know of, and it yielded a field of 12 players including a couple of people who drove in from out of town. There was a surprising showing of several competitive lists including a White Scar Censtar with Draigo, Double Stormsurge Tau, Hunting Pack CSM using a Brass Scorpion and a bunch of Maulerfiends, Skitarri with Knights and several other.  Here is a breakdown of the list I chose to bring: 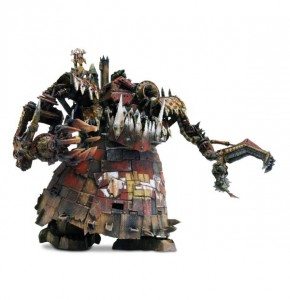 Game One: I played a gentleman by the name of Nicholas who brought a single CAD of Black Templars including (from memory)

ITC Mission was #1 Emperor’s Will in a Dawn of War deployment. I won the roll to go first and gave first turn to my opponent. I null deployed except for the Stompa, which I rolled 6 void shields for, and a unit of Gretchin plus both Meks all inside of the Stompa.  He dropped in the Sternguard right alongside the Stompa and after firing everything he had at the Stompa I believe he still had 2 shields left. My next turn I attempted to clear off all the Sternguard plus the Drop Pod but rolled a scatter for the Deff Kannon which still clipped  some of the Sternguard. His turn two he finished off the shields and inflicted a couple of hull points. My turn two all of my reserves came on which began the beginning of the end of my opponent’s army. He just didn’t have the tools to deal with the Orks this time. At the end of the day I was able to gain all 11 points to my opponent’s 0. On a side note I did not roll a single hit for the Gaze of Mork nor the Lifta Droppa…a theme to continue throughout the day! 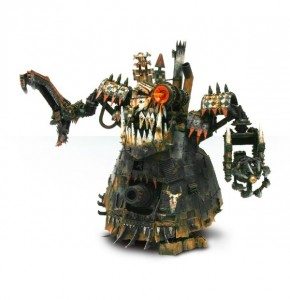 Game Two: I played a gentleman by the name of Thomas who brought a nasty White Scar Centstar allied in with Grey Knights for Draigo and Coteaz. His list from memory was:

ITC Mission was #2 The Relic an a Hammer and Anvil deployment. I won the roll to go first and opted for my opponent to go first which in hindsight was probably a mistake. He deployed his Centstar mostly centrally but a little offset to my right on the other side of a large piece of ruins in the center. His Vindicator was placed in the leftmost corner and his Land Speeder Storm lined up centrally aiming towards the Relic. I null deployed again, probably a mistake, and placed the Stompa  directly in front of the Centstar. He infiltrated Scouts onto the Relic, into my bottom left corner on objective 2 and into the top right corner onto objective 1. I rolled 5 shields for the Stompa and attempted to Seize which I failed.

He Drop Podded in the Tactical Squad right behind my Stompa and rolled a hit. A combination of all the Meltas and Krak Grenades took out all my shields and opened me up to a volley of Prescienced Grav shots. At the end of that I believe I took four hull points. My turn 1 I fired the Deff Kannon onto the Centstar which it deviated several inches to the right but still clipped a few models and Draigo tanked all of the wounds and ended up only taking 1. I then proceeded to charge the Centstar with the Stompa but a combination of Draigo tanking and kicking off Stomp wounds to Centurions yielded nothing and I believe I took a couple of hullpoints from Draigo in the process. He then Hit and Runs out of combat.

Turn Two he continues to pour everything he has into the Stompa bringing it down to 2 hull points remaining! The Stompa luckily survived long enough for all of my reserves to come in so I don’t get tabled. The rest of the match was a bit of a blur but I do know I ended up  losing the Stompa and Draigo and friends ended up mopping a good majority of the rest of the army. I scrapped for anything I could and ended up snagging one of the tertiary points. The game ended 11-1 Ork loss.Thomas ended up going on to win the whole thing, beating a double Stormsurge Tau army in the finals. On another side note I once again did not get a single hit with Gaze of Mork nor the Lifta Droppa!

Game Three: At this point I knew I was out of the running so I just wanted to have a good, fun game. I played a gentleman by the name of Graham and he brought a Skitarri army allied in with a couple of Knights. Now I have never gone against a Skitarri army so please forgive my lack of knowledge of the names of the units. His army roughly consisted of:

ITC Mission # 3 Purge the Alien in a Vanguard Deployment. I won the roll to go first and gave it to my opponent. He deployed fairly spread out with his Destroyers on the left flank, Knights in the middle and the rest all on the right. I deployed the Stompa towards the Knights and decided the deploy the Tankbustas one on each side of the Stompa and once again I rolled 6 shields on the Stompa.

Turn 1 he moved the Castigator up front towards the Stompa and then ran towards it. He also ran a unit of Rust Stalkers towards my Tankbustas. I think he brought down a couple of shields but that was about it. My turn 1 I fired the Tankbustas into the Castigator doing a 1 hullpoint and I forgot to fire the Deff Kannon, doh! I charged the Stompa into the Castigator for fun and it ended with me destroying it and taking a few hull points in the process. The ensuing explosion deviated onto a Gun Wagon which blew it up and nicked my Stompa for another void shield.

Turn 2 he continued working on the Stompa reducing it down another couple of shields and charged his Atrapos into the Stompa. His Atropos finished off the Stompa and the explosion didn’t do anything of note. My turn 2 a good chunk of my reserves came on to help run around and grab Maelstrom objectives and contest others. I did charge a unit of Tankbustas into the Atropos and managed to kill it with tank hunting Melta Bombs. The ensuing explosion did finish of the unit of Tankbustas, though.

After those events the remaining turns were a battle of gathering maelstrom objectives and me ceding the primary to my opponent since he had a substantial lead. In the end I was able to edge my opponent out on maelstrom points by 1, giving me the secondary. The resulting score was a win for the Orks 7-4 with me gaining all the tertiarys. On a further note, I still never hit with the Gaze of Mork and the Lifta Droppa…the entire tournament! 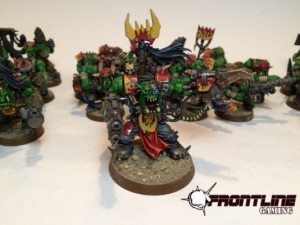 Overall I finished 2-1 and 5th out 12 in my first tournament with the new Big Mek Stompa, which I can live with. I had a great time and think the Stompa is a great addition that helps Orks compete with the ever changing meta. I don’t think it’s too overpowered and can easily be taken down if an opponent brings the correct tools to deal with heavy armored walkers. It was probability defying that I never did hit anything with the Lifta Droppa and the Gaze of Mork which would’ve helped a lot. I’m sure my showing of the Stompa was not the best as I am not the greatest tactician on Earth and I am sure my list is not best optimized for its use however I am back to the drawing board to improve! Tell me what you think and thank you for reading, Noah out.

23 Responses to “Noah Brings his Big Mek Stompa to a Tournament!”

Leave a Reply to NotreDameGuy