Hey everyone Clover362 here with another installment of Frontline Gaming’s review of the Eldar codex. Today, I will be writing about a gem of a unit from the heavy support section, War Walkers.  For more reviews and tactics articles make sure to check out Frontline Gaming’s Tactics Corner.

Eldar War Walkers are fantastic,  they posses all the traits you want in a competitive unit.  War Walkers can be kitted out to have a defined role and accomplish specific tasks in your army.  They are points efficient (price paid for accomplishing the designed task) and they can take advantage of normal Eldar shenanigans to make them more resilient than appear at first blush.

War Walkers come in a unit size of 1-3 War Walkers at a base cost of 60 points per model.  War Walkers are open-topped walkers with AV10 all around and 2 Hull points.  They have ws/bs of 4, S5, A2, and I5.  I know at first blush that seems like a unit that will die from a stiff wind but War walkers wargear and special rules make them a lot more survivable than they appear.  A smart Eldar player will keep their War Walkers shooting and will have a unit that has a great chance to make up it’s points every game.

The Power Field grants a 5+ invulnerable save which is nice in increasing the chances your War Walkers stay alive to keep shooting.  And the weapon options allow you to kit out the War Walkers  to kill infantry, light armor, heavy armor, or heavy infantry at mostly reasonable prices.

Battle Focus-This rule allows you to run after you shoot or run before you shoot.  This obviously works well with fleet as you to re-roll your run distances making it more reliable that you can jump in an out of cover and/or line of sight.  This allows you to both get into range for your fire power and stay hidden to help increase the War Walkers longevity.  It was nice that Games Workshop extended this to War Walkers as you would expect Eldar walkers to be extremely nimble and fast.

Scout– The big advantage of your War Walkers having Scout is that you can outflank with them.  This can leave your War Walkers shooting at side or rear armor against vehicles they might otherwise have a hard time damaging, or allow you shoot down hidden backfield units.  Very good and powerful. 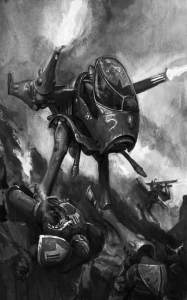 As everyone now realizes, formations and detachments can make a marginal unit a must take, so any evaluation of a unit has to address the various formations that they can appear in.  One unit of War Walkers is mandatory in the Guardian Stormhost and Guardian Battlehost formations.  Both of these formations can serve as a core formation for the Eldar’s Decurion style detachment called the Eldar War Host.

In the Guardain Stormhost formation the War Walkers gain preferred enemy when they shoot a unit that is within 12″ of any of the formation’s Storm Guardian units.   In the  Guardian Battlehost formation the unit of War Walkers gain the preferred enemy  rule when shooting at an enemy unit that is within 12″ of the formations Guardian Defenders.   In both formations, this bonus rule dials up your War Walkers effectiveness right when it is critical that you start dealing damage to a unit that is threatening your lines.  In addition to these rules, if you take a unit of War Walkers in one these formations as part of an Eldar War Host your War Walkers will also gain the special rule Matchless Agility.  Matchless Agility allows models from the War Host to automatically run 6″ instead of rolling a d6.  That is a great rule for War Walkers as it allows you to more reliably shoot and jump back into cover or out of line of sight. 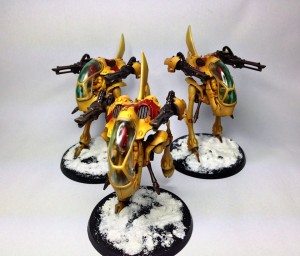 The two big tactical questions that apply to War Walkers are how do you equip them and how do you keep them alive?  Like most things in 40k, it is better to dedicate the War Walkers to a specific task.  What this means is you probably should never mix weapons as it can make half of the unit’s shooting inefficient.  For me I believe the two best load outs are all scatter lasers or all bright lances.  Both of these weapon load outs give you the range to let your War Walkers hang back and either wreck light infantry and light vehicles or put a hurting on any armor you encounter.  A unit of 3 War Walkers with 6 Scatter Lasers will cost you 180 pts and a unit of 3 maxed out with bright lances will cost you 210.   The Starcannons might seem appealing at first but the sheer weight of dice make the scanter lasers almost as good against units with good saving throws and better against AV12 for 30 points less.  Additionally, because Eldar have ample access to AP2 throughout the rest of the army with the Monofilament and Bladestorm rule, you don’t really need AP2 from your War Walkers.  The Eldar Missile launcher option provides versatility and potential skyfire but it drives the unit cost to high for what ultimately is still a pretty fragile unit.  Personally, I believe the max Scatter Laser load out is the best as it will hurt pretty much any infantry or light armor unit though weight of dice and keeps the unit cheap for the amount of fire it puts out.

As far as playing your War Walkers, they are pretty straight forward.  Hang them in your back field close to a LOS blocking piece of terrain or a place where they can get cover.  Then simply use battle focus to jump in and out.  With fleet you should reliably get in and out of position even if you are not in a War Host formation.  Throw guide on them to take their shooting up a notch as well.  With guide they can even help against flyers and FMC.  Overall War Walkers are a very good unit in a very good codex.