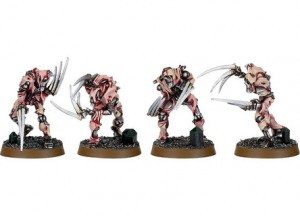 The Future’s so Bright I Gotta Wear Flesh:

The Flayed Ones are an odd unit in the world of Necron fluff. Infected with the flayer virus cast upon them by the C’Tan Llandu’gor in its death throes, these Necrons are forced to bathe in the blood of their enemies and wear their skin in a mad attempt to reclaim their lost mortal shell. These bad boys are also a fantastic unit in the Necron Codex and can fulfill a lot of great roles in your army. Take a look at the Tactics Corner for more great information about how to survive in this 40k world.

To Flay or Not to Flay:

The Flayed ones bring a lot to the table with their inexpensive yet impressive profile. At a solid leadership of 10 and at less than the cost of a Space Marine with a solid stat line you have a great unit that can get deep into assault and not typically lose its face. Be sure to check out the other great tactics articles on Necrons and the other forces in the 40k universe. Know your army, know your enemy. 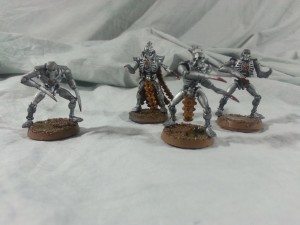 The Flayed Ones starts out at a unit of 5 but can be pumped up to as big as a unit of 20. With no shooting to speak of, the Flayed Ones are a dedicated assault unit whose special rules make them an overall all star unit.

The main wargear that each Flayed Ones comes with is set. Each one has two Flayer Claws which count as melee weapons and therefore give it +1 attack. This is great for an assault unit as being able to pump up your attacks will help to insure an assaulted enemy is a dead enemy. Flayer Claws are also AP5, which isn’t terrible (Xenos and Guardsmen quake in fear at this!), and has the special rule Shred, allowing them to reroll wound rolls. Perfect for an assault unit.

What this means is that your Flayed ones come with four attacks and five on the charge. A squad of 20 can put out one hundred attacks on an enemy unit and with shred can turn those 50 hits (assuming we hit of 4’s) into a bevy of wounds for the enemy to deal with. Brutal!

The special rules Flayed Ones have really make them shine and adds to their tactical flexibility in your army. Flayed Ones comes with Deep Strike, Infiltrate, Fear, and Reanimation Protocols. Decurion Flayed Ones are especially resilient taking that Reanimation roll to a 4+. Being able to come on the sides of the board, especially on Hammer and Anvil, gives this unit a great edge in getting to the soft underbelly of your opponent, which is where they shine the most.

If you are going first, Infiltrate is also incredibly good to get them into position to take progressive objectives and threaten enemy MSU scoring units whom they typically outclass in melee. Deep Strike is also, obviously, awesome for board control and reacting to things like Drop Pods. These deployment options are what really boost Flayed Ones into the awesome category.

Fear, while it won’t come into play all that much with all the Space Marines around, is still a great extra bonus, especially with their cheap cost. These extra bits are what makes this unit a great value for your forces. 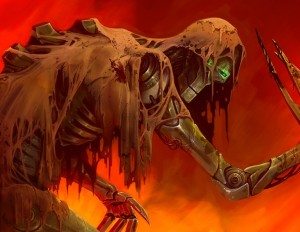 The Flayed Ones have pretty much one major use: assault, and this they do well. Or at least do well against most targets. Units with a toughness of 8 IE Wraithknights, very durable units such as Invisible Deathstars and combat units that can go before you and shred your armor need to be avoided by Flayed Ones as they won’t be able to hurt them or will take too many wounds before they can react. Flayed Ones are great for shredding smaller units, tying up artillery pieces, and taking a lot of other forces in the 40k universe. They will pulverize most of the troops of other armies and can really hit a lot other units as well. They are quite good at their role, just not as good as some of the other dedicated assault units so be careful. Not being Fearless and with low initiative, they need to be careful to not get run down in a flubbed combat.

One of the great things about Flayed Ones is the ability to put pressure on an enemy force. Seeing a knot of 15-20 of these gruesome foes suddenly appear via Deep Strike or Infiltration and your opponent will have to do some major reaction in many cases to avoid the incoming assault. You can utilize this to relieve pressure on other units in your army as the enemy will either have to flee, find a way to deal with them, or face the brunt of their assault. Toss in a solid character such as a Destroyer Lord for preferred enemy, or Zandrekh (more on him later) and they become a fearsome unit.

So for the assault side of things, they will shred most smaller units, can go toe to toe with many assault units, but will struggle against top tier assault units that cut through their armor and against units they just can’t hurt. That isn’t to say you won’t go after those units, as you may need to tie up those groups for a turn or two and you might find yourself rolling hot on your Reanimation Saves and whittling them down to size.

They can also be great screens to keep your troops and other less assault units safe. A squad of 15-20 can take up a large chunk space and keep the enemy at bay. Space Marines will surely go after and assault your Necron Warriors and Necron Immortals squads, but will certainly think twice if there is a fat Flayed Ones squad out in front.

Another excellent tactic with them is to run them MSU style. Taking a number of 5 man units is cheap, fits in the Decurion Detachment as an Auxiliary choice, and allows you to provide a multitude of threats and objective grabbers all around the table, forcing your opponent to make difficult target priority choices. These small units are durable enough to be a pain to take out but also hit hard enough to be a major threat to other MSU style units and non dedicated assault units.

While the Flayed Ones are really good, they also suffer from some big downsides. The main thing is that while they have a solid leadership, they can get run down if you lose too many of them in one round of combat. They are not fearless and getting fearless on them is quite difficult. The only character that comes stock with it is Nemesor Zahndrekh and he can’t start the game with them as he does not have infiltrate. You could infiltrate and daisy chain them back then jump in turn 1, but that could be a disaster if you get seized on and Nemesor gets shot off the battlefield.

Another thing to worry about is their armor value. 4+ isn’t terrible, but many things cut through that, especially with all the plasma, grav, and d-weapons on the table. Your Flayed Ones should avoid Eldar Wraithguard with D-Scythes at all costs as they will get neither their armor save nor the Reanimation roll against their weapons. They can liquidate you quite easily if they get in range.

Even with these detractors, the Flayed Ones is a great unit that will tear into many an enemy and bathe in their blood, as their programming demands.