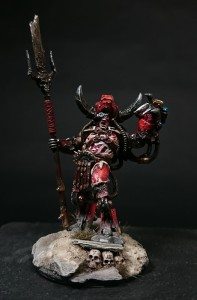 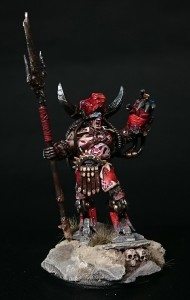 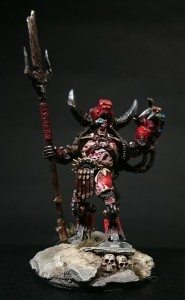 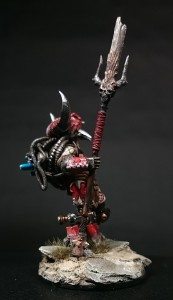 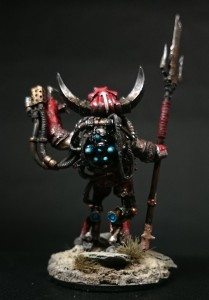 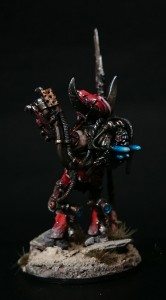 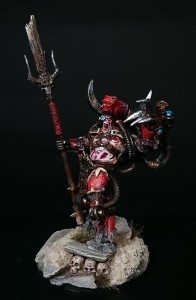 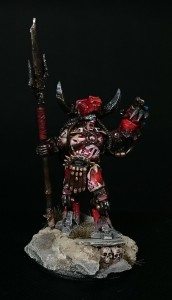 This Stunning Piece by Jake Bruticus, another fantastic conversion and paint job. Here is what he says about it:

Legio Infractor is an Imperial Titan Legion and is currently engaged in the war against the forces of Chaos on several of the moons of Profundis. The Skitarii of Legio Infractor trace some of their heritage to the barbaric Skitarii of Legio Invicta, and are organised and employed in a similar way, usually protecting titans against boarding actions, or as shock troops.

Legio Infractor has been involved in conflicts with the various factions of Chaos since its inception, and as such has adapted its way of fighting to suit its preferred enemy. In order to be effective shock troops the Skitarii of Legio Infractor are genetically modified giants, capable of standing eye-to-eye with Astartes. They are equipped with exo-suits that usually take the form of various animals, such as lions, panthers, bulls or grox and carry rugged close-combat weapons. In battle the Skitarii are programmed to behave like wild beasts, often charging on all fours, using mechanical limbs to reach incredible speeds while their vox amplifiers emit bestial roars. Even hardened Chaos forces have been known to break and flee before this unexpected and terrifying stampede.

The Skitarii are usually controlled remotely by Adeptus Mechanicus operators, but they are also led from the front by giant Skitarii officers known as Alpha Primes. The Skitarii Alpha Prime designated Goth XI is one of the most experienced field commanders in Legio Infractor, although due to an incredibly high rate of attrition the field commanders do not usually serve for long. In addition, the fact that the Skitarii vat-grown, chemically enhanced bodies have an accelerated life cycle and a maximum life expectancy of 20 years before they burn themselves out means that although Goth XI is a veteran, he is only twelve Terran years old.

My hats off to you this is awesome!!!

← Horus Heresy Primarchs: Reviews, Tactics and Opinions: Fulgrim
The Armies to Watch out for at Events →

One Response to “Daily Awesome Conversion”