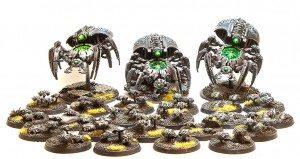 Goatboy bringing to you another Necron Codex Review – the Canoptek Spyders.  The harvesters of the Necron Army – the Canoptek Spyder is a powerful choice for a few different Necron lists.  As usual – if you want to read up on more tactics check out Frontline’s Tactics Corner.

The Canoptek Spyder is a Monstorous creature choice for the Necron army.  It enables one of the better Formations (Canoptek Harvest) in the book as well as is the backbone for the Scarab Farm list that I’ve talked about in the past.  The role of the Spyder in any Necron army is to provide backfield support with its ability to generate more Canoptek Scarabs, still be a threat in combat with its AP 2 attacks, and provide a decent counter assault unit as needed when dealing with a fast and engaging army. Oh, and did we mention the Spyder is cheap as chips?

You can purchase 1-3 Spyders per unit and they have a few upgrade options as well.  They are fearless themselves and do not come with Reanimation protocols.  They are strength and toughness 6 with 3 wounds, so it is a pretty nice tarpit unit.  As it is an MC it gets AP 2 close combat attacks so assaulting into a unit of them is not always the best idea unless the attacking unit is an extremely dedicated assault unit.  The biggest bonus they have is the ability to add to an existing Scarab unit by creating a single Scarab swarm per Spyder per turn.  You roll a d6 afterwards and a roll of the one causes the Spyder to take a wound, although in the Canoptek Harvest where you will usually have Reanimation Protocols, you will get a save against this wound.  A properly tooled up Scarab Farm list can easily produce 10+ scarab bases a turn.

The Spyders have a few upgrades available.  They can get a Fabricator Claw Array which grants them a Servo Arm/Harness like ability that can fix an Hull Point, Weapon Destroyed, or Immobilization result on a 4+ to a nearby vehicle if they don’t want to shoot.  They can also take a weapon upgrade with a Particle Beamer which is a Str 6 AP 5 Heavy 1 Blast attack.  Not completely terrible but still expensive.  They also have the only anti psychic option available to the Necrons with the Gloom Prism which grants the Spyder unit and any Necron unit within 12″ Adamantium Will.  This isn’t the best anti psyker option and with Terrify not being nearly as terrifying it isn’t an upgrade you see most of the time.

I spoke a little bit about its special rules earlier.  They have Fearless and the Monstrous creature Special rule.  This gives them Move thru Cover, Smash, Relentless and Hammer of Wrath.  They also get the ability to produce Scarab Swarms as well – as long as there is an existing unit of them to add too.  Their cheap cost makes them extremely efficient when you compare them to other MC units in the game.  They seem to fall into the new style of cost for MC’s that some of the newer codexes have gone too – Tau and Eldar.

I’ve talked about this already – but this unit is the backbone for the Scarab Farm list.  Without this robotic Spyder – that list would not be able to function properly.  The issue with this unit – while good based on its rules/cost/etc it really needs the correct support to work well.  This pushes it into specific lists instead of just being the correct “good” choice you see other parts of the Necron army.  Still if you plan on making a ton of babies this model is the second thing you choose – behind the Canoptek harvest.

The initial Scarab Swarm I have seen built starts off like this.

Basically you build 13 bases a turn – can hide under and around the shield if needed – have Obyron in front to get a 2+ armor save that can be rerolled – once you get Reanimation protocols up you can be a little more freeing and move around.  Here you just cover the table in the glittering horde and get ready to try and dominate with robots.  The Solar Staff is there to help keep a turn safe as you teleport up etc. with Obyron.  The Wraiths are the tax you have to pay and you can do some upgrades if you want as you have 25 points left over.

Will this list burn down everyone?  Probably not but it will be a pain for a lot of armies to get around – especially when they go multiple swarms deep around objectives.  I do worry about finishing games on time but if you can quickly move around, building babies, and then throwing them out into the real world this is the army for you.

Alternatively, you can run with a “mini-Scarab Farm” and just take a single unit of Spyders to start to beef up a unit of Scarabs. While obviously not as powerful as the mega farm, it performs a similar function without investing so many points and can give you a very useful tool in your Cron army.

Spyders are a great value for the points, provide some melee punch, and a very cool special rule in their ability to make more Scarabs.