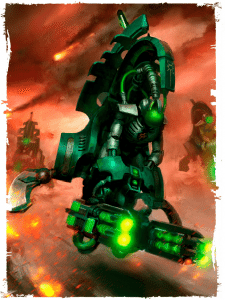 Today on Goatboy’s review extravaganza, we will look at a unit that went from a zero to a very rare hero in the Necron Codex.  That unit is the mighty Tomb Blade, which became an instant hit when it was stuck on the loading dock and everyone needed to get at least a squad of 3 for their Necron Decurion Detachment as a part of the Reclamation Legion. For more reviews check out the Frontline Tactics Corner.

When we initially got the Tomb Blades they seemed a bit lackluster.  They were initially used as a quick Line Breaker unit and didn’t see a ton of table top usage.  This all changed when the new book hit and they got a significant boost in the power department with decent toughness, strong shooting, and a plethora of good rules.  I think the only thing keeping massed Tomb Blade armies in check is that they were hard to get and the current age of army power level shift has kept players from going out and buying a ton.  This unit can go from Maelstrom helper to damage output machine all based on how you want your list to function. 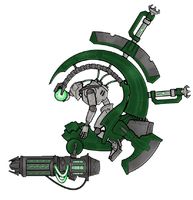 The Tomb Blade actually has a lot of options available to it.  Unlike other Necron choices it has both defensive upgrades as well as offensive upgrades.  The Weapons available are a Gauss Blaster or a Particle Beamer.  The Gauss Blaster is pretty strong as it is Twin Linked and can get an option to ignore cover.  Massed Str 5 weapons can be a nightmare for most Xenos armies as they normally do not get the 3+ armor you see in Marines and other Marine like armies.  Plus the Gauss has the normal Gauss rule which allows them to Wound/Glance on a 6+ versus anything.  The Particle beamer shoots a Str 6 Ap 5 small blast that you can get Ignores Cover on as well.  This one isn’t bad as you can put a ton of wounds on other Xenos but I feel the default option is the best.  The other Wargear changes can give you a 3+ armor save as well as Stealth.  This isn’t too bad on a Jetbike model as we all know how having a 3+ Jink save can keep these buggers alive and causing trouble – especially with a Decurion Reanimation protocol save.

Special mention for the Ignores Cover upgrade, which really makes them shine. With Guass weapons, they can be a big threat to vehicles as they auto glance on a 6, or to light infantry such as you see with most Xenos, where they just shred them with twin linked, STr5, AP4, no cover save shooting.

Just like all Necrons they get a Reanimation protocol save.  This unit is part of the basic Decurion so they can get an improved save as well as Move Through Cover.  This is great as they can just go anywhere and be a pain in the butt for your opponent.  They can get +1 cover save through the Shadowloom upgrade as well – and we all know how that one rule can give it to the entire unit.  As a Jetbike they are extremely fast and give a Necron player an option to go get Line Breaker, complete Maelstrom missions, or just be a pain all over the field.  The 3+ armor save upgrade is also worth it as it gives you some toughness that doesn’t make you have to jink to stay alive.  Also as this is a Jetbike unit they +1 to their toughness making small arms fire have to work a lot harder to wound them.

As this unit is a default choice in a Decurion you see a lot of Necron armies just run 3 of them.  Normally they are upgraded to 3+ armor save and one might have a Stealth upgrade if they need it.  Their weapons load out stays Gauss and they are seen as a harassment/line breaker unit.  That tactic is pretty easy as they do the job Eldar Jetbikes do without the Str 6 gun and Objective Secured.  Personally I think there is still a really strong army that utilizes a lot of these to create “bad situations” for your opponent as you can ignore cover and wound with everything.

Their speed and toughness is great as they can take an assault from a “basic” troop unit and have a good chance to survive and win the combat due to their high toughness.  With the Decurion allowing you to take more squads of them I could see them being used as mini Destroyers that are faster and you can sacrifice them more due to their lower point cost.  I know with my own local friends we always think a true massed Tomb Blade army could be a great spoiler list for any team based event as the damage potential is pretty high versus most armies.  I would think a Knight army would be scared as all that Gauss will mean a lot of Ion Shield saves will be needed to be rolled.