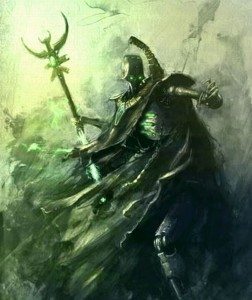 Oh, how the mighty have fallen.  The Necron Lord, once the only HQ option for Necrons, now reduced to a supporting role.  But fear not hierarchical member of the Tomb World, for your fall from grace has not diminished your usefulness.  Be sure to check the Tactics Corner for more great articles!

Overview:  50pts is a pretty good bargain for this guy.  Though seemingly overshadowed by the other HQ options, there is a lot we get on a Lord that should be enough for you to turn your head.  The stats for this guy are great compared to most lower tier HQs.  The really impressive part is the Strength and Toughness of 5, WS and BS 4 aren’t bad either, but nothing really to write home about.  The weaker parts are the Initiative and Attacks, being only 2, we have to remember that this Character is designed to fulfill a cheap supporting role, not win combats on his own.  The rest of his stats are similar to most other Necrons: LD 10 and a 3+ are respectable, and we’re happy to have them along with the 2 Wounds. 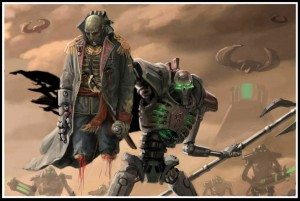 Wargear and Options:  Rocking the Staff of Light, the Lord has a respectable anti-infantry weapon that comes standard.  Though only 12″ in range, Strength 5, AP 3, Assault 3 are fearsome.  What really is useful though are all of the options that are available to the Lord.  We can give them something from the Melee or Ranged weapons list, but also options from either Technoarcana or Artifacts of the Aeons lists.  While the Necrons don’t have the largest armory compared to some other races, we have a lot of options available to us that can allow us to equip our Lord in any manner that we see fit.  These tools and options will let us customize our Lord into something that can be useful or what we need in our army. 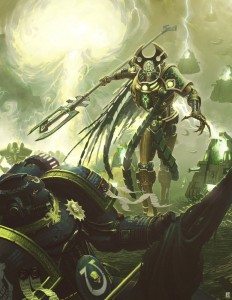 Tactics:  Game plan, what do to with our Lord?  Well, it really depends upon what the rest of our army is going to be doing.  If we’re using our Necrons in an Allied role, or a smaller detachment, we want our HQ to be cheap and efficient.  We’re mostly going to be using our Lord to support our Infantry or other units.

Now, don’t get me wrong, there are other characters that are far more tempting and can be competitive for this job, but that doesn’t mean we can’t find a use for the Lord.  Our Lord can be very useful for helping to get the most our of our Warriors or Immortals.  A Veil of Darkness on a Lord is a handy tool that can help counter the biggest struggle for Necron infantry based armies, the extreme lack of mobility.  Ghost Arks and Night Scythes counter that, but sometimes points are tight or models are readily available.  This combo works very well with a large block of Warriors, but can also be useful with a deathstar unit like Lynchguard or Wraiths.  Throwing on a Warscythe can give the Lord a little teeth too, but this alone will not make the Lord a powerful unit for close combat.

Another option is to stick the character into a deathstar while he is armed with the Solar Staff.  Man, this gear is good.  It can prevent drop pods from alpha striking or any other heavy amount of firepower from taking the teeth out of your nasty units.  The Solar Pulse ability, for those of you who are unaware, forces enemy units to Snapfire at the unit containing the Solar Staff for one turn.  The Solar Staff adds even more durability to the borderline insane durability of Necron deathstars, and adds a minimal but respectable amount of firepower as well (the same shooting profile as a regular Staff of Light).

The most important thing to remember here, is that the Lord himself, is not a monster.  He is very much a supportive character, like a Librarian.  He can bring tools that can really be a boon to the rest of your army.  Keeping him cheap is the best way to get the most out of him; additionally, don’t try to have him do too many things at once.  The competition for your HQ slot is fierce when it comes to Necrons, and while there really aren’t too many bad choices, don’t forget about the humble Necron Lord.  Versatile, cheap, and flexible, he can bring a boost to your army at a competitive price.