Once again it’s time for List Review, and this week we’ve got a pure Adeptus Mechanicus 40K list on the bench to see what we can do with it. 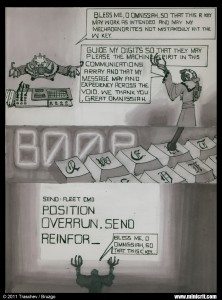 I am seeking help on my ad mech list I am currently building. This is a work in progress army so your response will guide my future purchases. What I want to do is a Adeptus mechanicus force without going to the default war congregation as I want something more unique and tailored even at the price of power and paying for my own upgrades. We generally play casual games with good player not hell-bent on optimization so it’s not a tournament force (at that point I wight just go for the war congregation as it pretty much writes itself…). I have a small force of Salamader at my disposal (mostly scouts & marines)but I would rather keep it pure ad mech.

The dominus goes in one of kastelan combined with the raiments of tech to create a Anti-air unit on the cheap that will be useful against a no flyer army. The bold units are my next buy. I was also thinking adding a culexus for anit-psy

So, let’s get a couple of issues out ofthe way. First of all, a Dominus is not allowed to join a unit of Kastellan Robots, as they are monstrous creatures and Independent Characters may not join those (even if there are other, non-MC models in the unit.) If we want to have him saddle up with some Kastellans, we need to take the Cohort Cybernetica formation (which in all honesty is not bad and we’ll have to keep in mind.)

The second problem I see looking at this list is less explicit, and it’s likely the reason for the email: in short, this is a battleforce army. What is a “battleforce army?” The name comes out of the old starter armies that GW used to sell for each faction (Tau Battleforce, Space Marines, Battleforce, etc.) Because they are an easy starting point for new players and because of the way GW markets its products, new players would often end up with a random mish-mash of different units that didn’t work well together and left gaps in their ability to do many sorts of things. This style of army-building is especially evident if you look back to the “example” armies present in many of the old (4E and earlier) codices, which are just absolutely atrocious from any kind of play perspective.

So, even though this is explicitly a non-competitive army the writer is requesting, I think we have our work cut out for us. It certainly incorporates some useful elements into it, and many of the units aren’t bad per se, but it suffers from a lack of focus in its overall game plan. Sticking to pure Mechanicum will make things a little trickier, but it’s definitely doable- both Skitarii and Cult Mechanicus have some very good units in them that we can take advantage of.

What Do You Can Do, You?

So the first step in our journey is picking the chaff from the wheat- what are our respective factions good at? What bases do they cover? What problems do we have to worry about?  Because Mechanicum is such a strange little beast, it’s important to pause and take stock of what we have available before we decide what we’re going to commit ourselves to.

Skitarii are actually very well-off in this regard. Their core detachment gives a very handy set of bonuses with Scout and Crusader (plus the potential for Preferred Enemy on our warlord, etc) and we have access to lots of other solid choices as well. Vanguard are powerful short-range brawlers and Rangers have excellent mid-range utility weapons- we don’t have to be sad about using either or both of them. Their special weapons give us excellent anti-infantry and anti-tank, albeit at a not-inconsiderable cost and at relatively short ranges. Ruststalkers and Infiltrators are fairly mediocre all things considered, though if we had to choose Infiltrators are pretty clearly the superior option. Dragoons give us potential for a pretty decent melee kick against vehicles, and Balistarii give us some basic anti-air combined with decent utility shooting. Lastly, the Onager lets us bring either a powerful “artillery” shot or an array of anti-air guns, depending on our needs.

Cult Mechanicus, however, are a bit more limited in their options. The Dominus is an excellent HQ, with good stats, great gear, and lots of utility. However, both troop units are a bit lackluster if we don’t have access to transports due to their short range and relative fragility. With no Scout, no Deep Strike, and no ability to Run, we are very hard-pressed to get these guys where they need to be a lot of the time- Destroyers can do alright thanks to 30″ range, but on the other hand their 4+ armor is a lot less protective. Both types of Electro-Priests are absolute garbage of the worst sort, with not even token functionality. Kastellans are quite good, though they tend to be a bit ponderous overall and are best suited to a hybrid role where they claim midfield and act as a counterassault unit.

So, putting all of that together, we have a couple options. We could try to run an aggressive force with short-range firepower and melee units to push into the enemy’s face. Turn 1 would often be a bit weak for us in this army, but in theory we make up for it after that. Alternately, we could take the opposite path and run a much more defensive force that wants to stand back and shoot at things, using its surprising melee capacity to hammer enemies that try to get inside the reach of its guns. I think there’s merit to both plans, but I like the sound of the second one more overall, so we’re going to go with that- however, the first has a certain degree of viability, and for those at home looking to try something wacky (and who have plenty of room in their budget), a combination of lots of Dragoons for anti-vehicle duty, the Breacher formation for Deep Striking, Kastellans for cutting down problem units, and some Infiltrators and Vanguard for getting some sneaky tricks in would be the general plan.

However, that’s not the road we’re going down, so let’s see what we can do for the original list. 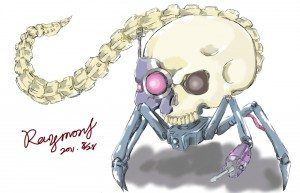 So, our new version does a lot of what the original does, but with a few changes and a few improvements. The Kastellan Robot Maniple essentially combines the two Kastellan units (and the Dominus that wanted to join them but couldn’t) together into one big, stompy midfield unit. We swap for the Phosphor guns in both cases because they have superior range and damage output to the flamers and because we already put out a very large number of AP2 attacks with the combined unit (fifteen, or twenty-three if we have the right Protocol up- and more than half of those swing ahead of Power Fists.) Their main job is to plod forward, soaking up enemy fire, and keep any of the enemy’s melee units off our case; if they happen to get into some assaults themselves, all the better, but 24-36 S6 AP3 shots per turn (with the ability to split fire if needed) we are more than capable of holding our own in shooting. Also, don’t underestimate the power of reflecting back enemy shots on 6s- it can be a very nasty surprise. The Autocaudecus gives us IWND on the whole unit, which is great with so many multiwound models, and the Rainment means we can Snap Shot with pretty brutal efficiency- be it against flyers, Invisible guys, or on overwatch- we can expect in the neighborhood of ten hits or more in these situations.

We have minimized the Cult Mechanicus detachment because Canticles of the Omnissiah really wants you to be fielding a LOT of units for it, and without War Convocation we really just can’t do that- none of our usable units comes in at less than 155pts, which is just too much to expect to take the 8+ of them we really want. Doctrina Imperitives, on the other hand, don’t scale based on our units and are much more controllable as a result- and they’re arguably better in an offensive sense anyways, so we’re fine with that. Still, don’t forget those Canticles- Stealth for a turn or rerolling 1s or even free autohits in combat can all be critical if used at the right time.

The SKitarii side of the army is a bit different than the usual version. Also, it’s kinda pretty expensive- while I would like to avoid this, there is no realistic way to keep a pure Mechanicum force while on a budget, unless you are doing a lot of converting or 3rd-party work. So I’m not exactly happy with that part of it, but there’s no way around that issue. In any case, we are fielding two large units of Rangers because of the superior range of their guns; Precision Shots is great for picking off heavy weapons, sergeants with Power Fists, etc, and the Arc Rifle is never a bad gun (and can make short work of vehicles when needed.) The Divinator is just a cute little piece of kit that will occasionally help you get you the Skyfire or +1 cover or whatever else you need.

Ironstriders are in there as more utility shooting; they can ping on flyers, try and snipe just like Rangers, or grind HP off of vehicles as needed. Their range is their main defense, since they are otherwise relatively fragile, but for the price it’s not bad at all. The Dunecrawlers, on the other hand, are our real stars- the S10 AP1 blasts from their Neutron Lasers will scrap most vehicles post haste and the bonus Stubber is a helpful addition when firing at other targets. Not that our setup allows us to run two in front with the 5++ and then two more hiding behind them for 5+ cover of their own, even when there is no terrain on the field to speak of- we can also use similar shenanigans with our Kastellans and Ballistarii.

All in all, I feel like this is a fairly fluffy Mechanicum list, though a bit shorter on bodies than I might like- perhaps replacing a Dunecrawler with another unit of Rangers or Vanguard might be prudent. It’s not quick-moving, but it tends to advance as a relentless block of bodies that are hard to put down and most all of its units have at least basic utility in both shooting and melee. Lack of Objective Secured is potentially an issue, but with so much punchy from the Kastellans not a lot of things will want to get that close to it. With the limited number of units choosing shooting targets (and splitting fire with the Cohort) are very important to its success.