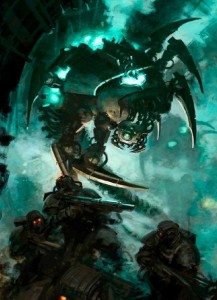 What’s good fellow gamers?  Mr.MoreTanks back with another Necron article, this time about one of the most terrifying assault units in the game: Canoptek Wraiths.  Cringe in horror as these serpentine robots rush across the board at you with horrifying speed.  Be sure to check the Tactics Corner for more great articles!

Overview:  Fast, mean, and tough; Wraiths are one of nastiest units in the Necron Codex.  Being Beasts, these suckers don’t care about terrain and move fast, plus we get Fleet.  This is a big boon for Necron players, as most of the units in the book are pretty slow.  Toughness 5, 2 Wounds, and a 3+/3++ plus Reanimation Protocols (in the Caoptek Harvest Formation) makes these guys super tough.  120pts for 3 of them with the option for adding another 3 models makes this a great unit.  For 240pts, 6 of these guys are honestly pretty reasonable.  The Strength of 6 keeps them a threat in combat against most anything, and helps them cut through most any targets.  Necrons sorely lack for close combat power, while there are a couple other options within the Codex, Wraiths fill a desperately needed role. They are most often seen taken as a part of the Canoptek Harvest formation as an auxiliary portion of a Decurion Detachment. 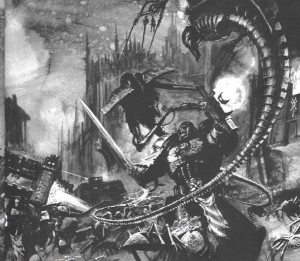 Wargear:  While they don’t come with any wargear, Wraiths have some options that are pretty useful.  Whip coils are most certainly a must, especially at only 3 points a model.  Making them Initiative 5 is necessary for what we’re gonna need these robits for (more on that later).  The particle caster for 5 points is respectable, but with Strength 6 and a mere AP 5 isn’t that super when compared to the rest of the armory of the Necrons.  Being a pistol is nice, but we don’t really need the short range firepower.  The Transidmensional Beamer at 10 points isn’t really something we need.  The heavy weapon part is VERY unappealing, as it will prevent us from moving.  Avoid this weapon, Necrons don’t really need help killing tanks and it slows us down unless you can get Relentless or some other type of rule in the unit. 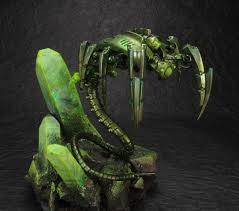 Tactics:  The Wraiths fill an important niche for the Necrons.  They present an immediate threat to the enemy that has to be dealt with.  Taking one or two units of 5-6 of them is the best way to go, though to keep points saved for the rest of the army, I’d advocate just one maximum sized unit with whip coils.  This unit goes straight into the heart of the enemy, taking all the shots that your opponent can throw at it.  We’ll want to add some characters into the unit as well, to make it a true Wraithstar.  A destroyer lord is a good choice, especially if he’s from a Destroyer Cult detachment, since he gives us access to a ton of Destroyers that will be a big boon for supporting our Wraiths.  We’ll want a solar staff in the unit as well.  This stops an alpha strike on the unit, which has the potential to really take the teeth out of the unit.  We’ll also want to throw in Orikan the Diviner, not only will he likely become a tank with his “going Super Saiyan” mode, but his Master of Mechromancer rule is what really makes him a must for the unit.  +1 to reanimation protocols and rerolling saves of 1 make this unit insanely tough to kill so long as they have Reanimation Protocols on them from the Canoptek Harvest formation.  Stomps are still a threat, but those threaten every deathstar.  This unit is totally terrifying, and when supported by mobile guns like Destroyers, can really make for a nasty combo.  Dr. Insanitron ran this unit backed up by Destroyers and a couple units of Immortals in Nightscythes, and he can count on one hand the number of times he’s lost with it.  The unit is the lynchpin (pun intended) of the army, the opponent can’t really stop it, but can’t afford not to.

Another option for Wraiths, and one that is significantly less expensive and deathstar like, is to be a counter assault unit.  Having one or two little three “man” units hanging out behind your blocks of Warriors or other units can be a big boon.  This is a pretty defensive strategy, and while can be a very good one for Necrons considering their durability, its not always the best one for ITC missions.  If your opponent is playing Drop Pods, this isn’t a bad tactic.  Take your opponent’s firepower on the chin, and then jump on the small vulnerable Marine units that come bailing out.

One more option is to bring two mid sized units and push them down the field.  These units apply pressure quickly, and while they lack the staying power of the deathstar, they’re still very tough.  The ability to ignore terrain is huge, and super useful for pressing up the field.  Rolling up the flanks or wherever there is large line of sight blocking terrain is a good way to use the Wraiths in a harassing role.  A huge part of 40k is board control, and as your main force pushes up the middle with their toughness, the Wraiths prevent your main block from being flanked our enemy units hiding from the main force.

So there you have it, a few humble ideas for the nastiest of the Canoptek units.  Wraiths have the terrifying staying power of most Necrons, while being able to bring something to the table that Necrons lack, close combat power.  Wraiths allow you to keep the pressure on the enemy and deter enemy assaults with their speed, high initiative, and load of attacks.  Don’t leave them hanging though, Wraiths need to be supported, otherwise they will eventually be dragged down by the enemy.  Thanks for reading fellow gamers, may the dice be ever in your favor!

WraithFlight also means that they still get the benefit of their Whip Coils when Charging into Cover, rather than getting reduced to I1 like other Beasts. Very handy little Rule.

Is this true?? I’ve heard other people say that they will still have to attack at I1 even with the coils if into Cover..

Yep. Units that “aren’t slowed” by Difficult Terrain still suffer the Initiative Penalty, but Units like Wraiths, that treat all Terrain as Open Ground, are fine, because they’re just Charging across Open Ground.

They get relentless from decurion detachment too correct?

Only the Reclamation Legion gets that rule.

The Harvest gives out Relentless, so yes if your Wraiths are in a Decurion they get Relentless as well. The Transdimensional Beamers are actually not too bad other than the hefty price.

Ah yes, duh, haha. I was thinking the Decurion itself, I forgot about the Harvest granting it.

Other than the price, the effect, and the fact that you give up Whip Coils to get them, they’re not that bad. 😛

How does Dr Insanitron run it as you said? CAD + DCult + Harvest? With all the stuff you mentioned in that section it seems like a lot to stuff into a Decurion.

I’m toying with a list that’s double CAD, 24 Wraiths in units of 4 backed up by lots of ObSec Troops. Sure, no one unit is as strong as a 6 Wraith Harvest unit, but you can spread out and threaten/tie up lots of things at once.

There was a guy at a couple local tournaments and I think even at nova that ran an army of just wraiths. He did pretty well at the smaller tournaments and i don’t know about Nova. T5 and 3+ invul on that many models is just really really hard to get rid of.

The #8 placer from Nova was a Wraith player, dunno if it was the same guy. He had 4 max units + the Eldar flyer formation.

But of course, Nova didn’t allow GCs/SHVs, so Wraitgs are much better when no Stomps or D is around.

PFFFFT, I hate these guys.

Wait, if you attach Orikan the Diviner will that mean they only move 6″?

So if you attack in cover with wraiths with whip coils do they attack at I 3 and not i 5.

Still I5. They treat all Terrain as Open Ground.