The results are in!

The ITC continues to roll forward and evolve as player feedback shapes the format. Here are the results of the latest poll.

First of all, a foreword on changes we made to our methodology this go around. For one, we required that voters verify their identity. We did this as we had discovered that in previous polls, some folks had been voting more than once or were asking friends to vote that didn’t participate in the ITC and had no stake in the outcome. So, we adjusted our procedures to eliminate this type of behavior. As a result, we got less votes than last time, but, probably close to the same umber of unique voters. And more importantly, these votes came from people that are either actively participating in the ITC, plan on doing so in the near future, or use the guidelines but have not participated in an actual event, yet.

Question 1: How do you wish to play Tank Shock as it pertains to Crunch? 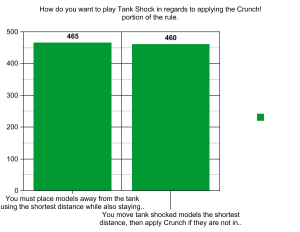 Wow, that was close! Only 5 votes separated these two camps. This to me is understandable as you can read the rule both ways: as being a very powerful tool to destroy enemy units or simply a means of displacing them and in rare occasions, destroying them.

So, what this means is that when a unit is Tank Shocked, we will be playing it as displacing enemy models by the shortest path but also keeping them in unit coherency and on the table if possible. The Crunch effect will occur occasionally, but not often.

Question 2: How do you wish to play the Tau Coordinated Firepower rule in regards to contributing Tau units sharing special rules? 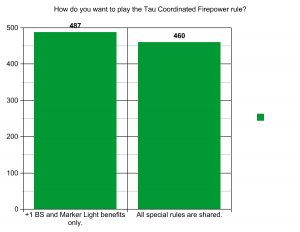 This was probably the most contentious ruling we had to deal with this go around. People have very strong feelings on this and so we intentionally worded the question as a preferential choice, not a definitive answer as to what the rule does or does not say as there are so many different interpretations of what this rule actually communicates.

In the end, narrowly, the more conservative reading of the rule won out in regards to not sharing buffs from different units. I thought this would be close, actually predicting that the more powerful interpretation would win out but it did not. Rarely do we see votes to go with a weaker reading of a rule pass, but as with Tank Shock above, this was regarded as being too powerful but a majority of ITC participants.

Question 3: How does the Tau Coordinated Firepower rule interact with rules that allow a unit to fire at multiple targets? 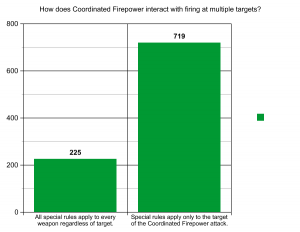 This one didn’t surprise me at all, honestly. The ability to potentially share so many special abilities across so many different weapons at a multitude of enemy targets was just too much for most players to accept. This was the aspect of the rule that most players expressed concern about before the poll and as such, the outcome feels appropriate.

Question 4: How does Darkstrider’s “Structural Analyser” special rule interact with Coordinated Firepower? This rule lowers the Toughness of a unit targeted by Darkstrider’s shooting attacks by -1. 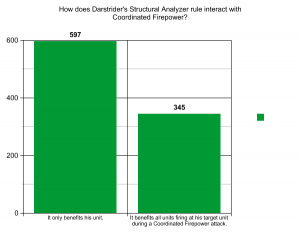 Again, we see the more conservative reading of the rule win out. This one was a bit more cut and dry in my opinion, as Coordinated Firepower applies to the Hunter Contingent specifically, and Darstrider is not in it, but that pesky “ICs joinning a unit become a part of it for all rules purposes” which causes so many issues, reared its ugly head again and caused the confusion. We deemed it only fair to vote on it and the ITC community voiced their opinion. This is consistent with the above poll results in that it appears most ITC participants read Coordinated Firepower as being more restrictive than permissive and that contributing Tau units act as individual components with specific rules shared between them and not becoming a single unit.

So in the end, the most conservative reading of Coordinated Firepower was the will of the majority of players. I was actually surprised by this as my gut told me we’d get shared rules against a single target only, but, I was wrong on this one.

While some Tau players will be upset by this outcome, the take away in my eyes is that Coordinated Firpower is still extremely powerful. Frankie has been playing the most conservative reading of the rule and obliterating people with his double Stormsurge list, including top level players and lists in tournament settings, and even defeating a Necron Deathstar with it in a close game, an army which typically runs right over Tau. The only time we see these types of reactions from the ITC community is when a rule is deemed to be too powerful to the point of taking the fun away, such as with the 2+ reroll saves and max power Invisibility. Instead of being upset at the perceived “Tau hate” which some players claim, instead try to see it from the other player’s perspective and try to understand their point of view that this was regarded as being a bit too much for the majority of ITC participants. I know that is easier said than done, but, this is where we are. Also, the new Mont’Ka detachment provides some very powerful tools for Tau players that are not so ambiguous in interpretation.

Question 5: Ork special character, Mek Boss Buzzgob has the option to take a Big Mek Stompa super heavy walker as an upgrade at 530 points less than the unit typically costs. We currently do not allow this upgrade in the ITC, should we allow it? 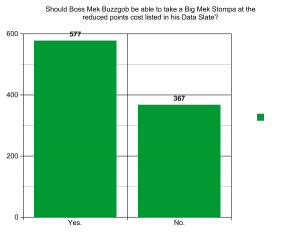 Bucking the trend of conservative rulings this time around, we see the ITC community boosting their neighbor in this case and voting for a more powerful army specific rule. Interestingly, this is actually just a reversal of an old ITC rule change from the days before all of the free point armies. Orks now gain access to Boss Mek Buzzgob and his cheapo Big Mek Stompa, which is quite powerful. This didn’t surprise me as Orks are largely percieved as one of the weaker armies in the game. While extra points are often a hot topic for many players, due to the rise of Battle Company, War Convocation, etc. the community seems open to giving a “weaker” army a boost, or at least, put them on equal footing.

What this means though, is that a LOT of tournament Ork lists will be packing a Big Mek Stompa. This is a powerful LoW and will provide quite the challenge for many opponents! Orks will–with the speed of a single rule change–rise up the tiers in power level. Be prepared to deal with this! If you can handle Imperial Knights, you should be good to go, but know your enemy so you don’t get caught off guard by this beast. Note, Boss Mek Buzzgob counts as a LoW choice when taken with this upgrade.

Question 6: If the above vote passes, should Boss Mek Buzzgob be allowed to take the discounted Big Mek Stompa upgrade in an army with non-Ork faction models? 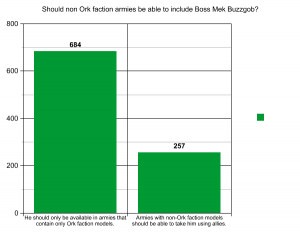 Again, no surprise here. The ITC community predominantly wanted to boost Orks, not anyone that slapped a few cheap units and Boss Mek Buzzgob in his bargain basement priced Stompa in their list. This feels fair to me. While you could make the argument that some armies could also use this boost, like Chaos Space Marines for example, the fact of the matter is that you’d see him shoe-horned into already powerful armies such as Daemons, who’d be taking advantage of their ability to summon in units on top of the huge points bonus granted by Buzzgob. If the intent was to help Orks, then that is what this question was for, and that is what we got.

Mission 2 and 3 have been swapped in the lineup, and mission 2 has been modified slightly. Mission 2 is the “Kill Point” mission, 3 is the “Relic” mission. We swapped these in the lineup to make the Kill Point mission occur later in a multi-round tournament. In a Swiss style format, each round reduces the number of undefeated players by half the current value. So, going from round 2 to 3 means the field just theoretically got twice as tough. We also altered the Kill Point mission to be more about, well, killing stuff! Before due to a design choice, it actually ended up being more about board control which runs counter to the overall intent of the mission so we altered the Tertiary mission objectives back to the classic: Linebreaker, Slay the Warlord and First Blood.

The reason we did this was because of the inherent advantage MSU style armies gain in the current ITC format. We felt that the balance had slipped a bit too far in their favor and decided to alter the missions just a touch to bring the balance back towards the middle. We didn’t want to go too far with it though, and felt that this fine tuning was just enough to level the scales a bit. These changes have already been reflected on the ITC format page.

As always, thanks to everyone for participating in the ITC and shaping it into what it is.