I have come to destroy you

Quick, durable, and packing serious firepower, Destroyers are perhaps some of the most aptly named units in the Necron Codex.  Be sure to check out the Tactics Corner for more great reviews!

These Robit Mens have got a bitter hate-on for the galaxy, and it shows.  Their are few units that these guys can’t make sweat and even fewer that really make these guys sweat.  Plus, they look pretty cool fused to their little hover board thingy.

Overview: Running in packs of one to five, we have some options on how large to make our Destroyer units, but you’ll likely find the sweet spot to be three models per unit.  This keeps the price reasonable, and gives the unit some durability by letting you move un-wounded models to the front of the unit to protect the squad’s longevity.  The Heavy Destroyer option to add to the squad is something we’ll want to avoid, as he doesn’t really fit with what this unit will be trying to do, harass medium infantry and be a thorn in the enemy’s side.  (More on this later.)  Jet Pack Infantry is great as it lets us have some amazing mobility and maneuverability options that are excellent not only for killing enemy models and protecting your own, but for scoring secondary objectives in ITC missions as well.

Wargear: Armed with a gauss cannon, arguable one of the better mid ranged guns in the game, this guy can threaten anything from bikes to Demon Princes.  24 inch range isn’t limiting thanks to the ability to Deep Strike, and two shots at Strength 5 AP 3 will make short work of many units.  Gauss also keeps everything in the game honest, though we really won’t be needing to use the rule much for what we’re going to be using Destroyers for.

Special Rules: First we have Preferred Enemy, an excellent rule that will make our BS 4 even more impressive.  Re-rolling 1’s to hit and wound is something that makes our guns WAY better.  It allows the Gauss rule to become a lot more threatening as well, although again, we’d really only be shooting at a Knight or large vehicle or MC is we were in trouble or lacking a better option. Preferred Enemy even helps in combat should the Destroyers get stuck there, and help to give them a bit of a fighting chance.

Reanimation Protocols is awesome, and has been gone over in depth a hundred times, but its good to know we have it, and even nicer because being Toughness 5 makes it a lot harder to be at -1 from Instant Death wounds.

They’re also Very Bulky, not that it will really ever matter. 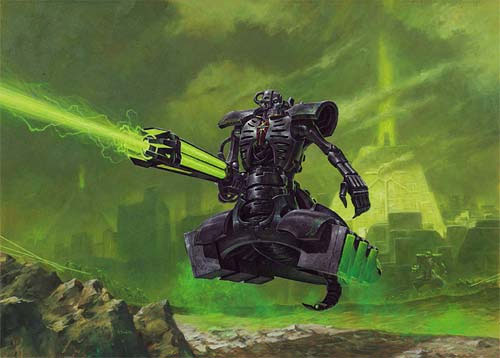 Tactics: So what do we want our Destroyers to do?  Well, the main strength of the Necron army is its durability.  Being able to wade across the board taking everything the opponent can throw at you on the chin is an amazing gift, albeit, the wading is done at a fairly slow rate.  This is where the Destroyers come in.  The ability to Deep Strike is huge for these guys, and gives us tons of options for how we will use them.  Deep Striking lets us contest and threaten objectives either far away or out of the way from our main force or opponent, while not sacrificing firepower or a large portion of our army.  Plus, the unit is so durable and easy to hide that you can usually feel pretty confident sending a unit off on its own.

Place your objectives in an intelligent manner, behind big line of sight blocking terrain.  You’re jet pack infantry, use it.  In the Movement Phase, hop out and blast your opponent.  Then in the Assault Phase, hop away and hide from their returning firepower.  This helps to keep your models out of their guns and assault, which is where our Destroyers are the most vulnerable.  In Malestorm, you can rack up serious points while protecting your units and objectives in this manner.  Jet Pack Infantry is perhaps one of the best things that Destroyers have going for them.

So we know what to do with our Destroyers, but what do we want them to, destroy?  Well, the most obvious of targets are MSU units, especially MEQs.  Destroyers also love hitting jetbikes, SM bikes, Crisis suits, Kataphrons, Tyranid MCs, Demon MCs, and light to medium vehicles.  Detroyers like picking on small isolated units, units that won’t really be able to dish back the necessary firepower to stop a unit of Destroyers is key, or at least crippling these units before they get a chance to do so.

This tactic works very well in conjunction with Wraith/Lynchstars.  As the star rams its way down the throat of your opponent’s army, and your opponent is going to have to deal with it.  It simply moves too fast to be ignored, all the while, your Destroyers will be picking off their support units and snagging you ITC secondary points while your deathstar hits home.  Your opponent will have no board control as you secure the battlefield.  Check and mate.

Don’t forget though, these Destroyers, while durable are not invulnerable.  Playing conservatively and carefully with them will be key.  There is a lot of competition in the Necron book for Fast Attack, but I think trying to add a Destroyer Cult to any army is a good call.  I’ll let Capt A go into greater depth on those detachments.

Also, these guys LOVE a Traiarch Stalker nearby. Bumping their BS to 5 with Preferred Enemy means they have amazing 97% accuracy! This really helps to make them ultra reliable.Thanks for reading nerds, may the dice be ever in your favor.