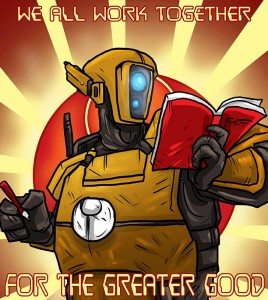 DevianID brings us his Tau rundown: Howdy all, with the release of the Tau update, and a week with the book to shake down some of the theory with actual game experience, I have come out of hiding from my cave in New Jersey to share my thoughts and experiences with the book. Be sure to check out the Tactics Corner for more great articles!

Now, I’m sure there are a lot of people doing similar reviews, but my style is to look at the book with a fine eye towards strictly competitive play.  I am a tournament player for both the fun of competition, but also because tournaments offer a way to play several games with a group of friends all at once.  This is something my crazy work schedule doesn’t allow outside of organized games set up in advance.  If I were playing pickup games with my buddy, bringing a different list would no doubt be more enjoyable for both of us, but in a tournament you want a list with as few points of failure as possible.

So that out of the way, it’s good to mention that I had a refined Tau list before the book update came out that I have been playing for years.  I do very well with the list, and consider it very strong versus all comers.  It is this Tau list that already exists that the new Tau shall be judged on, because many people simply never understood how good the pre-hunter formation Tau were.

The old list, for completion sake, was as follows:

This list has 12 durable marker lights, hitting on 2’s or 3’s with sky fire, lots of twin linked, lots of ignore LoS smart missiles, some ap2 ranged attacks with riptides and a huge amount of mid-range strength shots.  I have 12 kill points, which is on the small side, and they are all hard to remove.  The void shield shuts down grav weapons and psychic scream, I can move, run and shoot to almost full effect thanks to 12 marker lights and the ethereal, even with Broadsides, and any flyer that I can see should expect to be shot down instantly.  Finally, the Culexus keeps psyker based armies honest, as a psychic melee death star that loses its buffs in front of this army simply gets removed from the table.  For warlord, while the Ethereal is only t3, he has a 55% chance to roll the skyfire Tau warlord trait in games where that is important, allowing me to challenge 6 Flyrants armies more easily.

As a bonus, each Broadside unit kills 3 rhinos a turn, so with the rise of rhino based Gladius armies I can quickly de-mech them and physically block off my home objectives.  Killing 8 Rhinos in a turn with shooting to spare has a great demoralizing effect for Gladius players, but that said reading the mission and understanding the end game is very important with this list, as you can’t rely on your 20 objective secured Kroot to contest every objective against Gladius and their 50 ob sec infantry.

The points of weakness of this list are versus armies that out-shoot me through a void shield, since other than the 2 riptides I don’t have counter assault elements to tie down serious shooting units.  The other weakness is abilities that remove overwatch, as the list is designed to get a second shooting phase with the entire army thanks to supporting fire.  Still, with proper screenings with Kroot this weakness is beatable, but if it catches you off guard, like from a hidden Ravenwing Darkshroud that flies 30 inches over to a distant assault unit when your screen is down, you are in trouble.  Finally, this list is good at holding objectives at the endgame since it kills contesting units, but it is bad at scoring distant turn by turn objectives like maelstrom objectives in the opposite corners of a board.  That said, maelstrom that includes objectives such as kill an enemy unit this list wins pretty handily, as my units are durable and I can shoot down almost anything.  This means I don’t usually lose basic maelstrom missions unless I get unlucky with my maelstrom draws.

A side note, since the assassin is not best friends with the Tau, it’s often best to place him first and deploy the army around him, since you have to infiltrate up to 18 away from the Tau.  This ensures you have a pre-measured spot to deploy him.  Failing that, have him walk on the board if you literally can’t deploy him.

So all in all, this list can expect a decent chance to win versus almost anything.  My recent big tournament losses were against a ravenwing darkshroud surprising me with how it takes away overwatch, a Screamerstar list where my assassin staying in reserve on turn 2 and 3 meant 2 extra turns where the chaos could box me in, and against a shooting Eldar list where my first turn somehow didn’t kill a single unit, and then saw my opponent roll 3 boxcars on his Warp Spiders to assault me back in my deployment zone, avoiding overwatch with Flicker Jump, and then assault on top of my objectives.  Thus, the list had the tools to win in these games, but dice or poor generalship cost the game.

Now that we have covered the old Tau, and understand how the take all comers list works, we have a foundation to compare the changes in the new book to what we know works already.  It is through the lens of our tournament list that we focus our attention to the book changes in part two.