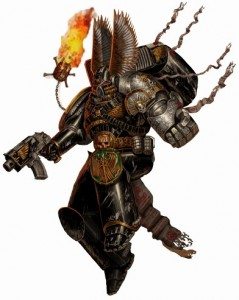 The Shadowstrike Kill Team is, hands down, the coolest formation in the Talon Strike Force. Let’s explore why! And, as always, be sure to check out the Tactics Corner for more great reviews and articles.

The Shadowstrike Kill Team is a a combination of both the new and seasoned members of a chapter, brought to bear on the enemy when a vital target must be destroyed. The formation provides some incredible tools for the precision elimination of critical enemy units. It is comprised of the following:

Wow! What a great formation! This is both characterful and powerful, which is a killer combination. However, while this formation can hit very hard, it’s also quite fragile. You must play it with caution or watch it melt without doing a thing.

Quite clearly, the obvious application of this formation is to place the Scout units into a position where the Vanguard can come in from reserves using their special rule, land without scattering, and then assault a key target. That in and of itself is very powerful, but the real magic of it comes in when you use this formation in the Talon Strike Force, which allows units to come in from reserve on turn 1!

So, with the combination of rules from both of these detachments, you can assault out of reserves on the first turn of the game which with a unit like Vanguard, can be brutally powerful vs. the right opponent. If you are playing Raven Guard CTs (which you must if you are using the Talon Strike Force) then you will be able to reroll the die roll for first turn, have Shrouding on the first turn to mitigate interceptor and overwatch, AND you can reroll your charge rolls and HoW attacks, too! That is very, very good.

If you are going first, your opponent will have to deploy defensively or reserve critical units if he doesn’t want to expose them to first turn maiming at the hands of Vanguard. Now, the downside here is if you hang it all out there for a big first turn assault like this and you get seized on, you are in big trouble. The man himself, Coteaz, will be finding his way into many a Talon Strike Force as an ally to offset exactly this scenario. Also, if you get second turn, the combo is harder to pull off as your Scouts have to survive a turn of shooting, or must come out of reserves in position to guide in your Vanguard (note, the Scouts do not have to be on the board at the beginning of the turn for their special rule to kick in as with a Homing Beacon). Your Vets don’t HAVE to have the Scouts to pull off their trick, it just helps quite a bit.

The flexibility of this formation though, is its real strength. If you find yourself playing a game where the first turn charge is not optimal due to any number of circumstances (playing against another reserve army, or an army with no appealing targets, etc.) you can opt to wait, and have the Vanguard come in on any turn you choose, up to turn 4! That is really powerful, and allows you to play them when it benefits you most.

You can run the formation in a number of different builds. You can min/max it, with 2 units of 5 Scouts, and 1 unit of 5 Vanguard with your choice of special weapons which certainly works quite well and minimizes the investment in the formation should you not find yourself in a match-up that benefits the formation’s strengths. Or, you can invest a little heavier into the Vanguard to increase the number of units you can engage from reserves. A 10 man squad can Combat Squad if needed, or you can keep them together and really deliver a heavy blow to a single target. As every Vanguard can take a special melee weapon, and comes stock with 2 attacks base, these guys can actually hit very hard. Just be wary of truly powerful melee units as the Vanguard are still working with an MEQ stat line and will get their butts handed to them by superior assault units. If you wanted, you could beef up the total number of units in the formation to really amp of the impact it has, by bringing in multiple Vanguard off of 3 or more units of Scouts and hitting the enemy in a number of vital locations at the same time. Just be wary of investing too heavily in this formation as if you find yourself facing an army that doesn’t care about being assaulted from reserves, all those points will be wasted.

I find a slightly conservative approach works well: two units of 5 Scouts, 1 unit of 10 Vanguard with a fairly limited number of special melee weapons. I typically go with 2 fists and 2 sets of Lightning Claws. As Vanguard pay a reduced price for these, you get a lot of mileage out of them. This unit weighs in at a reasonable points cost, and when you add in the 2 units of Scouts, you end up with the total formation costing you under 400pts. That is not bad at all for the huge impact they can have on a game, but isn’t so much that your army becomes top heavy. Also, I avoid putting any upgrades on the Vanguard Sarge as he often has to fall on the sword in a challenge. Best to keep him bear-bones, IMO, although that cheap Relic Blade available to him is quite appealing.

In all, this is a very effective, flexible, and characterful formation that when played well, can have a huge impact on a game. Plus, it gives a reason to bring Vanguard Vets who otherwise tend to languish on the shelf.

How are you running your Shadowstrike Kill Teams?