Make sure to tune in tonight to see our brave adventures continue down the dark path of Kingdom Death. Twitch 6:30pm PST. 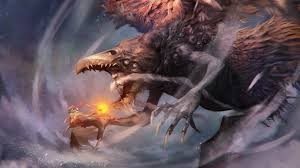 To sum up Week 1 of our campaign in one statement…. Banging is bad.

We started out pretty strong by not losing a whole lot of survivors. Given that we are playing the 6 player version rather than the 4 player version, the monsters are much more deadly. It is also very difficult to gear out 6 players rather than the standard 4, especially when the monsters aren’t giving out any more loot to accommodate for more players.

To get down to it though, we had our first “Intimacy” story event after a couple of turns and a child was born. Turns out, the first child (now named Virgil) was also deemed a“Savior” per our rolls we had on the table. As a result, Virgil ended up with a bunch of cool abilities. However, this is where I think we made a big mistake. We chose to raise Virgil (and all future children) in the coolest fashion possible… by selecting the “Survival of the Fittest” principle. In essence, every time we make a child, it’s a badass. However, the odds of making a child are slim and when we try, there is a very good chance that either one or both parents die in the “effort” to produce a child. Just think about that for a second… and let’s move on.

We have tried producing more children a few times and the results have been mixed. We have lost 4 parents in the process and only produced 3 children. Tack on those 4 to the 4 we have lost in our showdowns, and that is why our Death Count looks high for only turn 3.

We are close to fighting our first nemesis (The Butcher), and I don’t think we have enough gear to really have a chance, but we will see. Hopefully the last hunt before the big fight yields enough resources to put us in a good place. If not, the Butcher might just end everyone’s journey early.

Below is some basic information pulled from the Settlement sheet to help everyone follow along and see where we are at!

Dead Survivors (And who was controlling them!)

Posted on November 18, 2015 by White925 in Alternative Miniatures, Board Games, Review, videocast