This time on List Review we’ve got some fighty punchy angry Marines on the table, so let’s see if we can’t straighten them out into something functional and whip ’em into shape. 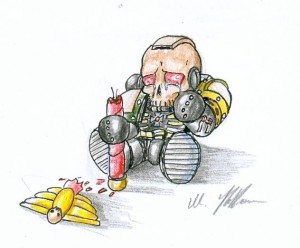 I’d like to submit a Blood Angels army list for your review. I know that the blood angels are not really the most effective or powerful Space Marines right now but I love Astorath and the Death Company and would like to find a way to play them effectively in a list. I’m not really looking for a super competitive list, but i would like to be able to play without getting stomped. Hopefully you don’t trash the list entirely.

Regarding Model limitations, I’d really like to avoid using the storm raven (I can’t stand how it looks) and conversely, I’d prefer if the Fire Raptor was kept in the list (just because it looks amazing).

My friends and I usually play either 1500 or 2000 so Feel free to add space marine allies (of any variant, except grey knights) if necessary.

So, let’s start by picking this army apart. It’s got the Death Company, Astorath, and the Assault Squads as well as the Tactical Marines pushing forward to be aggressive and the Fire Raptor there to (presumably) crack open transports and handle problem units scattered about the board. And also the Command Squad, which are… something? Walking forward hoping not to die? I’m not really sure. Not to come off as too harsh, but this army is not really doing justice to the codex, even with the problems it may have. We absolutely can make a better BA list and a better Death Company list than this, although we’ll want to make some significant changes.

Although the original writer has offered me a lot of options (1500 or 2000pts, any Marine allies desired, etc) I’m largely not going to make use of them- we could certainly use Skyhammer formation to bring in more effective ASM or one of the new Raven Guard ones to do the same. However, my take away from all of this is that this person is willing to accept such compromises, but would generally rather not have to make them- and I don’t think we need to make them in order to get a functional list, either, so I’m going to go with something very different instead.

The real problem we have here is that this list does not support its aggressive strategy well. Astorath is, sadly, not helping this a lot- his reroll to wound for Death Company is neat, but doesn’t work when we multicharge and if we’re putting him in a decent-sized unit of Death Company we kinda wanna multicharge, as otherwise we’re gonna completely overkill things. So he really pulls us in two directions with the unit, and the fact that his weapon is just a doofy Power Axe doesn’t really earn him any favors, either. So maybe we’ll keep him, but we may have to go ahead and replace him with something a little more functional for our purposes- it remains to be seen.

Beyond that, we’ve just got too many non-melee units that don’t really do what we need to be all that great. The BA “Chapter Tactic” is essentially Furious Charge, and while that is nowhere near as good as the top tier of Tactics from the SM book, it’s not unusable, either. However, if we’re gonna get some mileage out of it- and the Death Company- we want to really be doubling down on what we want to do with our list. 1500pts is not a big army, and we can’t really play too many games with cramming different stuff into such a force- in small games, it’s more important than ever to stay focused with a list and make sure you do one thing well.

I also think that the Fire Raptor is probably built wrong. Autocannons are fantastic on the Chaos version because it gets twin Reaper Autocannons, i.e. four shots per turret. The Loyalist one only gets single Autocannons, which is a lot less impressive of a trade. While these are still serviceable weapons, to be sure, we have a lot stronger temptation to keep the Quad Heavy Bolters on the sides and just turn ourselves into an infantry-killing machine. Since we’ll be using a lot of other stuff to hunt vehicles in this list, I feel like this is an acceptable option to go with- and, worst come to worst, we still have the four missiles on the wings as well as the nose cannon (not to mention the possibility of maneuvering into rear/side arcs) to bring down vehicles if we absolutely have to. 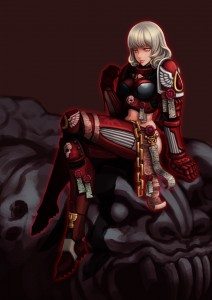 So here’s my big beef with this army: all of these Tactical and Assault Marines really aren’t pulling their weight. Sure, they’ve got Meltaguns and some Heavy Flamers; those are hardly terrible weapons. But they have limited reach and limited ability to do work once their unit is stranded on the field, which will happen pretty quickly. And we’re not even getting both Tactical units on the first turn, as we only have two Drop Pods- essentially, this army is playing a lot down on points early in the game.

And what do we get out of all this? Surprisingly little, to be honest. Enough Melta to give tanks problems, but not a lot beyond that- and we need more than that, because there are all kinds of threats out there. Some of them we can’t do anything about- in 1500pts we just don’t have space for everything we’d like- but we owe it to ourselves to cover what bases we can, so we need to look to making better use of what we have.

So, there are two ways this can go: we either update these poor little Marines to do their job properly, or we send them packing. I’m going to put together two very different-looking lists based on these two strategies, but understand that they come from the same essential problem, namely that our guys in power armor just aren’t performing in this list so far.

Oh, and those jerks in the Command Squad? They’re gone.

This is our aggressive version. Although BA Scouts lack the superior WS/BS of normal chapters, they do have one really big potential advantage- in a Ball Strike Force, they are swinging at S5 I5 on the charge, giving us a great pile of attacks to throw at most things that can often drag them down by sheer numbers alone. Although we “only” have thirty-three Scouts here, we back them up with a bunch of ASM (to help us crack transports when Meltabombs alone aren’t enough) and the Death Company, which I’ve increased significantly in number. The DC provide our second line of threat- with their fast movement, we force large numbers of targets on the enemy straight out of the gates, giving them no time to dawdle around and shoot at us at their leisure. We’ve downgraded Astorath to a normal Chaplain to save on points and because we really do like swinging at Initiative 5 wherever possible.

There are several ways we could tweak this, since we actually end up with a semi-awkward chunk of points at the end. I’ve gone for a relic on the HQ because that extra roll on the Strategic table is awlways great, but we could instead use those points (and a few saved from elsewhere) to get other upgrades instead- we could splurge and take Astorath instead if we cut a Power Fist or two Meltaguns, for example. We could also, if having the Tactical Marines and their Heavy Flamers in was preferable, trade out the Assault Marines and combined some of the Scout units together. We could even cut some of the Death Company to fit in more Scouts, ASM, or Tacticals if we liked, but honestly I think having the extra melee threat is a superior bet in many cases.

(As a side note: I used the Chaplain essentially for flavor reasons; a Librarian would almost certainly be better, since he can get us rerolls all the time with Prescience and has his option of different power weapons, but the Chappy at least isn’t awful here. However, downgrading to a ML1 Libby- with Jump Pack, of course-

Now, let’s take a look at a second, very different, sort of list.

So rather than trying to maximize our offensive potential, another possible solution would be to work to push a somewhat more midfield-oriented list. While we can’t compare to the scoring potential of a Battle Company, sadly, we can still bring a lot of special weapons and a lot of transports to the party and we can really clog up the field with our resilient, shooty bodies. Here the Death Company are performing a very different role- rather than being an offensive hammer, they are used as a countercharge threat, moving behind the wall of tanks (hopefully out of sight entirely) and getting ready to pounce on anything that comes too close to us.

This list is a bit weaker in the general sense, but it does have the advantage of having a more flexible base plan- at the end of the day, “sit on objectives and win games” is something that can really work out well even in bad matchups, as the onus ends up being on your opponent to stop you from just taking the game out from under them. The Veritus Vitae’s second warlord trait also becomes a lot more valuable in fishing for Conqueror of Cities, as we really don’t want to sink that many points into Dozer Blades for all of our vehicles. As before, a Librarian could arguably serve better as a leader, but we can keep Chappy around for reasons if we so please.

In theory we could also do something of a Drop Pod variation on this list if we wanted, although that one would benefit a lot more from mixing in a Skyhammer due to the nature of alpha strike armies. I won’t write up the list, but its composition would be fairly predictable from looking at the above; take Meltaguns and whatnot where you can, make sure you have an odd number of Pods total, and be dropping in with enough stuff to cause problems when you land. The Death Company would probably be nine strong, plus an HQ, in this version so as to fit in a Pod as well.

That wraps it up for this installment of List Review; if you have a list you’d like me to take a look at, feel free to send me an email at Abuse Puppy (at) gmail dot com and I’ll do my best to get back to you. Please include your list in the body of the email (not as an attachment) and specify what your goals for it are- for example, any units you specifically want to use, some sort of theme or aim you have for it, whether it’s for casual or tournament play, what points value and special restrictions your local group uses, etc. Also please include details on whether you are willing to purchase models to add to the list, or if not what models you already own; if you specifically want to avoid allies, certain units, etc, that is also good to be aware of. As I get a lot of emails each week from people, you will have to have some patience in waiting for a reply, but usually within 1-2 weeks I should have something complete for you.