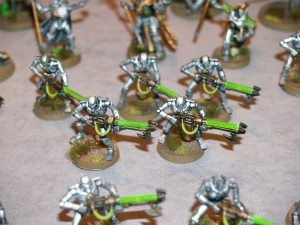 11011101 (that’s greetings! In binary) fellow metal heads! This is Captain A bringing you the downlow on the Necron Codex’s most basic troop, the Necron Warrior! Be sure to check out all the articles featured in our tactics section to make the most out of your 40k experience.

The Necron Warrior is going to have a part of just about every army your create from the Necron Codex, so it is important to understand the uses of this great troop choice as well as the limitations the Warrior has in facing off against other armies. This troop choice is cheap, effective, and extremely durable compared to other similar troop choices out there. Knowing how to use this unit well will repay double on the battlefield and will frustrate them to no end when your Warriors shrug off the even some of the most powerful weapons in the 40k universe. 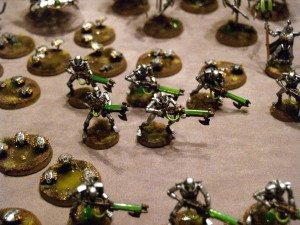 The Necron Warrior is the backbone of your living metal army. They are key in holding your objectives, contesting your opponents, bogging down assault units, and can often go forward without too much worry about running off the table with their excellent leadership stats.

The Warrior, while useful, is rather plain in terms of wargear. Each Warrior comes equipped with a 4+ armor save and Gauss Flayer. The Gauss Flayer is basically a bolter that fires 24” and Rapid Fires at 12”  but has an extremely powerful rule – Gauss. This rule makes the Warriors shooting attacks auto wound and auto glance on a 6. This is an extremely powerful and will pile on armor saves on pesky Wraithknights and can even glace armor 14 vehicles like Land Raiders and Leman Russ’. Gauss is one of the things that takes the warrior from its basic unit status to special.

The one thing the Warrior does have is access to are dedicated troop transports in the form of the Night Scythe and Ghost Ark. The Night Scythe is a flying transport that has good killing power and can plop Warriors just about anywhere on the field with its Teleportation Array which allows you to drop Warriors out even after moving 36 inches. The Ghost Ark can transport 10 models and add d3 Warriors back to a unit that has suffered casualties.

Warriors, like much of the Necron army, comes with the special rule of Reanimation Protocols. This rule is what truly takes the Warrior to a great unit. Reanimation Protocols confer a 5+ bonus roll to shrug off a wound when they fail an armor, cover, or invulnerable save. This is not a normal save and can still be taken against wounds that say “No save allowed.” This makes it absolutely stunning against high AP weaponry, psychic attacks, and other things that normally just wipe out other units. It can even be taken against instant death weaponry, albeit at a -1 modifier.

As a part of the Decurion Detachment’s core formation, the Reclamation Legion, which gives your Warriors +1 to their Reanimation Protocols, Move through Cover, and Relentless, and your Warriors are taken even further. They move fast through cover, can Rapid Fire and charge, and have a 4++ against just about every form of attack. They are saving 75% against all forms of wounds that do not cut their armor. That is fantastic. 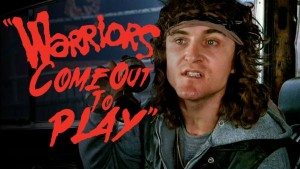 Since the Warrior is a troop choice and a part of the Decurion Detachment, you will be using this unit more often than naught. The good thing is that this unit rocks! The high leadership of 10 makes it trustworthy overall as it will rarely fall back from the battle field. Its Gauss weaponry has a chance to harm anything on the table and its special rule of Reanimation Protocols makes it super durable against many forms of weaponry.

The big thing the Warrior excels at is holding ground. Plop a ten man unit on top of an objective in cover and watch in delight at the frustration of your opponent trying to remove them from your backfield or theirs when deployed from a Night Scythe. Getting the best save from cover or armor then getting a bonus roll to keep them in play makes them so frustrating to remove. Don’t fear going to ground to get a bonus and remember that you don’t have to declare to go to ground until after the wounds are rolled. You may just want to risk that one wound that gets through so you can move and shoot or assault next turn.

We have talked a bit about the strengths of this unit, now let’s talk about its weaknesses. Even though it has a great leadership value, Warriors are not Fearless and are therefore susceptible to leadership manipulation effects like losing combat and psychic powers. Losing a combat can result in your whole squad being removed is you don’t roll well enough. They are still great at holding up other units because even if you lose three models, you are still on good odds of making your leadership test. Just be wary of strong assault units that will take too many models away in one go.

The other thing that isn’t fantastic about the Warrior is its armor save. A 4+ is beaten by so many things in the 40k universe. This is why hugging cover is a must in most instances with the Warrior as you need to take advantage of the Reanimation reroll to keep you alive.

Armies to watch out for are fast Khorne Daemonkin armies that can close in quick and get into close combat, Psychic heavy armies that you have little defense against, and Tau, Centstar, and other armies that can ignore cover, taking away that valuable reroll. You will want to give them other units to worry about first to shield your Warriors from harm.

Zahndrekh starts with Zealot which makes his unit Fearless and Grants them Hatred. This makes 20 Warriors going nowhere but where you want them to across the board. Being Objective Secured makes taking objectives great. Plop in the Destoryer Lord and they get Preferred Enemy as well, rerolling 1’s to hit and wound. The Ghost Arks move up behind and continue to add to the unit making this very hard to kill. Use the blocks of 20 man units in the midfield or to secure one flank and deep strike the Destroyers in behind the enemy, catching them in a hammer and anvil approach, using your Wraiths to keep their assault troops honest or to surge forward and overload their lines.

I personally love the basic Warrior as it is such a great unit for the points. It excels in many areas and adds a lot to the overall force and can be run in so many ways. Take your warriors out for a spin next time and see how they fare against many kinds of forces in the 40k universe.