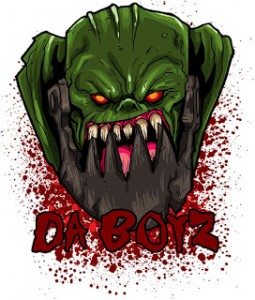 Logan here again, this time talking about the Singles event at Da Boyz GT 2015! If you’re looking for an account of flawless victory, you may want to check out a different article, however I’d like to think I didn’t do completely horribly! Check out the Tactics Corner for more great tournament reports!

As noted in the last post, this event was using it’s own version of Highlander comp (no duplicate troops unless all troops were taken, no multiple Heralds, single GC/SH LoW, no battle brothers, only a single Forgeworld unit, and no formations or detachments made up for formations).

I brought a combination of Tau, Inquisition, and an Assassin:

My first round opponent was Sam Smith, who brought an enormous Ork horde to battle. The following picture is before his deployment was finished:

Sam had top of turn, and road forward to about halfway up the board as my Servo Skulls had denied his Scout move. From there, he opened fire with a few bike units and managed to cause both my Pathfinders and Firewarriors to flee off the board like little cowards. In exchange, I erased Zhadsnark’s unit, one or two units of bikes, and brought my Stormsurge up in hopes that it could charge and stem the green tide… it didn’t work. Turn 2 saw a Waagh, and my Stormsurge surrounded by Boyz and another unit of bikers… Stomp is kind of useless when you’re dead before the I1 step :/ My own mistake, but it was them or the broadsides. Bottom of 2 had my Broadsides destroy a unit, and then get nailed in close combat where they held their own, but conveniently (for Sam) I forgot about my Hit & Run, so I just sat there and bit the dust the following turn.

This game ended with max points (33) for my opponent, and 0 for me… Operation submarine was well underway!

This game I got matched up against Dan Galligan from The 13th Legion (who were giving out free beer mugs, and had a pizza party! Hell yeah, awesome!) who was running a really cool, and old-school, Nurgle Chaos Space Marines list with heavily converted vehicles that looked amazing!

Unfortunately, as things tend to go, new is better than old. While we had a fun time rolling dice, and Dan was a fantastic sport, there wasn’t much in the way Tau death in this game, with me only losing my Tetras to the Spawn, and Dan running out of models toward the end of turn 4.

This game marked the start of operation submarine… 33 points for me!

As luck would have it, I was paired with another member of The 13th Legion – Steve “The Gentleman Gamer” Schlegel, with his Ork Stompa, a void shield generator, and a whole bunch of boyz! Unfortunately, it seems I did not get a picture of his army!

Believe it or not, that Stompa is SCARY! 72″ S10 AP2 7″ blast!? That’s a one-way ticket to Frowntown for my Commander if he fails his cover save, LOS, or Invul… Fortunately, dice appeared to be on my side as far as that went.

Steve could have easily decided to sit back and shoot me to death while claiming the objective(s) he needed, however he made the mistake of bringing the Stompa out of the Void Shield Generator’s range, which resulted in it taking 12+ hull points of damage over 2 shooting phases, effectively ending the game. Props to Steve for not laming it out, but unfortunately it was a poor tactical decision.

In an interesting twist, in this game I learned that Fortifications, buildings specifically, can hold objectives! They count as units, do not say that they are not scoring, and count as part of your army unless the opponent claims them… We spent some time going over the rulebook, as well as talking to some other folks, and we couldn’t find anything to dispute this regardless of how strange it was, so I ended up walking away with 25 out of a possible 33 points.

With the first day ending after game 3, we all went out for a steak and beers at the venue restaurant (which is also great, though pricey!), so I went into day 2 ready for some action and with high confidence.

I sit down against my opponent, Craig Bigham, see that he’s running ‘Nids in Highlander, and say to myself “Jackpot!”. Oh boy, was I in for some fun…

This game could have very well gone my way if it weren’t for some serious dice fail, and admittedly poor deployment by me. Craig had top of 1, and flew his Hive Tyrant over to take some potshots at my Broadsides, normally this is a bit of a waste given their 2+ save, but it wasn’t this time… turn 1 saw 2 Broadsides dead from shooting, and my remaining Commander, Drones, and Broadside flee off the table in terror by rolling boxcars back to back for panic and run distance.

Things really fell apart from there, and long story short I was tabled by turn 4. The only thing worth noting is that my Stormsurge spent some time punching it out (or kicking shins) with the Trygon Prime, and over 5 rounds of combat (or 6-7 stomps) did not roll a single 6. There’s a lot of talk about taking two of these guys to “stomp deathstars”, but that feels like you’re throwing half the points of your army on a gamble of rolling a 6, meanwhile these guys die in a matter of 1-2 turns against even a stiff breeze, let alone a proper close combat deathstar. 2 thumbs down for that approach…

This game saw another 0 for me, booo…. Craig went on to finish 4th overall! But there was an upside…

Like any good Warhammer weekend, there needs to be at least one game against someone that is nothing but smiles, laughs, and who will share some (horrendous, American) beer with you… Mr. Max Dubois!

This game had me up against his uncharacteristically soft Chaos Space Marine/Daemons of Chaos army:

Unfortunately this was another game, like the last game of the doubles, where even with insane dice there couldn’t really have been a win for Max. He brought a fun list, and got a horrible table to play on (zero LOS blocking, zero ruins), and faced a terrible matchup with lots of Ignores Cover. Turn 1 saw most of his Plague Drones dead, Turn 2 took out the rest of them and the Lord, and Turn 3 finished off the Daemon Prince.

Max played the objectives where possible, and did manage to snag some points in that game. I walked away with 30, to his 5.

I had a really good time at this event. The venue, staff, players, rooms, food, etc… was all just wonderful. Also, it was awesome to meet some of the “big names” of 40k like Greg Sparks, Nick Nanavati, and Tony Kopac (and I’m sure others, there was a lot of drinking…).

Overall,  I finished 41st on battle points (48th overall, if I remember correctly), out of 98 players. I’m definitely disappointed with the result, but I learned a huge amount, so I’m hoping to do better at my next event!

Really, the only negative thing I have to say is that the comp was really not conducive to the “casual and/or fun” atmosphere I think they (DaBoyz staff) were hoping for, and I believe, are known for. It was also strange to be an ITC ranked event, that did not use any form of the ITC FAQ or missions in addition to the Highlander format, and it would have been nice to know that it was ranked ahead of time. These are pretty minor things though, and really did not detract from my enjoyment of the event.

I’ll be back next year for sure, I just hope they don’t opt for Highlander again, but go for something a bit more mainstream… like ITC 😉