Hello everyone, Frankie here to talk a little bit about the new game: Kingdom Death. 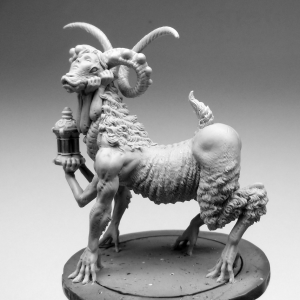 This last week a group of friends and myself cracked open there box set of Kingom Death, and let me say I was quite impressed. The box is really high quality and heavy duty. The models are very nice plastics. The cards are sturdy and have their own slots within the box. Overall my first impression was, “WOW this is the nicest rpg/boardgame I’ve ever seen.” Visuals 10-10. 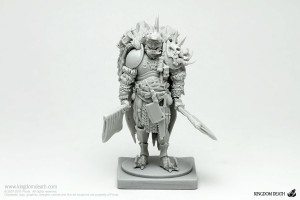 We then began playing a session. The game is well designed and is a ton of fun with a group of friends. My girlfriend–who’s not a gamer–even ended up jumping in and enjoyed playing quite a bit (the group wants her to play more than they want me to, lol!). The mechanics are really simple and easy to learn as long as someone has a firm grasp on the rules. The roleplaying aspect of the game is a blast and random as all hell, we lost one of our best characters due to a poor roll. Her face got burnt by fire and was kicked out of our character’s settlement, haha. The game is all about decisions and dice rolls which plays into the fun of the game. As for the board game itself, it is really tough. In the last boss fight we lost 2 of our strongest characters even with using tactics. The board game is also about resource management. You earn certain items after each fight and can use said items to build up your gear or settlement which will help you as the game goes on. Game Play 10-10. 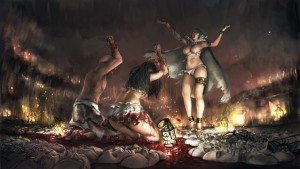 So the game as a whole is quite amazing. The designer put a lot of thought and hard work into it which for sure paid off. This is a great game to play with a rpg group as the game is long and story driven. It is also a very dark game and not for everyone so be warned. Also don’t get too attached to a character because chances are you will die and be forced to make a new one at least 2-3 times. We will be streaming a full game of Kingdom Death every Wednesday night on Twitch and will announce the first session, soon. So make sure to check it out if it is something you are interested in, I recommend it.

Really glad the game plays well. I have been a huge fan of the models and collecting some of them over time.

So there’s actually a game for these crazy miniatures? Looking forward to seeing it in action!

The game is actually very good. I wasn’t expecting it to be as good as it is, to be honest. Looking forward to the video!