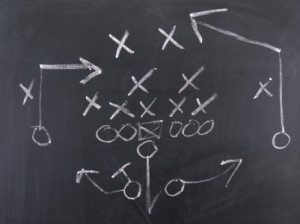 So hopefully you all took part in the last Tuesday Night Fight on our Twitch Channel and enjoyed the hard fought battle. It was a crazy close game, coming down to the the last die roll. We also gave away a Ghostkeel to a lucky watcher, MasamuneMato! Here are the write ups from both players about how the game went. 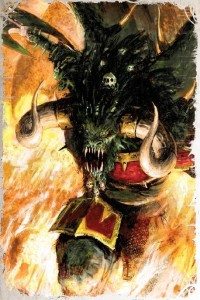 Check out the pre-game and see the lists, here!

“So in a nutshell this game didn’t go at all how I thought it would. Basic lessons I learned from this game were to be more aggressive and watch your opponent’s positioning on the Battlefield. Frankie did an outstanding job of positioning his Rhinos which was evident when my Fire Raptor got vector locked to its doom. He also did a cowboy style circling of the wagons, which ended up keeping his guys out of combat for a few extra turns.

Thinking back I should have separated both Sorcerers to gate around and cast Vortex from the very beginning of the game. the Vortexes were doing work, treating the Rhinos as bowling pins! Having a few extra on the table would have helped a lot.

I will say that Frankie has the most ridiculous luck I’ve ever seen, rolling what seemed like 50% 6’s on all dice rolls. Even with all my mistakes the game came down to one die roll, which Frankie wasn’t nice enough to roll a 6 on. The game ended on turn five with Frankie winning 7-5. One of the best games I’ve played in a while, had we gone one or two more turns I would have been putting Khans head on a trophy rack. Definitely want a rematch in he future, and I promise next time I’ll Blood Thirster and give the people what they want.” 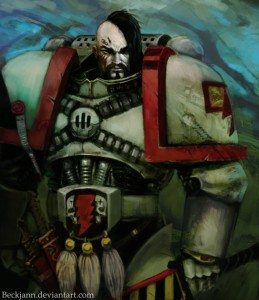 The game was for sure in Larry’s favor before it started, with no armor saves for my Grav Weapons and the kill point mission. I knew this was going to be a very tough game as soon as I saw Larry’s list. He had a large Flesh Hound unit with a few characters in it along with two hard hitting flyers. I was hoping to go first so I could start whittling away at his large unit of Hounds. Unfortunately for me, Larry Seized and was able to get into a commanding position.

The game started out really close on kill points but after about turn three I could see that I had no chance at winning that part of the mission. I did however, have a commanding lead on the Maelstrom so the game came down to the tertiary points.

I made a few mistakes in the game such as deploying most of my Bolters away from Larry’s corner. I just wasn’t thinking about an alpha strike when I was setting up. I was more thinking about late game points, which is where Battle Company really shines. I also made a few mistakes throughout the game such as not getting out of my Rhinos sooner and unleashing all my firepower on those Flesh Hounds. I’m pretty sure we both made about the same amount of errors and would have done a few things differently if able to go back.

It was a great game and I would enjoy a re-match against that army. In the end the Space Marines were able to pull out the W with some hot dice. Excellent game and I look forward to my game vs. Alan and his KDK next week for another Master’s League game! 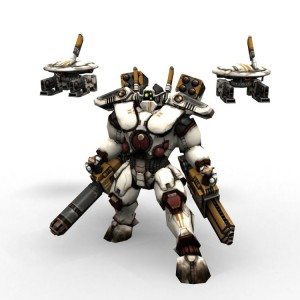 Next weeks game will be KDK vs White Scars Battle Company….again! Can they pull out the victory with a new general? Only time will tell. Don’t miss out on this game and don’t miss out on the opportunity of winning one of the new Tau Commander models which we’ll be giving away. Subscribers to our Twitch channel get triple the entries that everyone else does on these giveaways. So don’t miss out and tune in next Tuesday at 7:00 PM PST to our Twitch Channel.