Hey everyone, Reecius here to show off some pics and talk about some progress I have made on one of my armies. Yeah, you heard that right, I’ve actually gotten some hobby time in, w00t!

Finding time to work on my own stuff is very challenging these days, but I actually really love to build and paint minis. I have really been enjoying my Airborne Army as it contains many of the elements in a list that engage me. It’s a tricky army that is all about smart deployment choices, overlapping unit buffs (or, force multiplication), movement and orchestrating a group of relatively weaker units into a powerful combined arms force. Since I am farming out most all of my other projects to our Frontline Gaming Studio to finish painting, I figured I could work on this one, myself. I made some time to get some work done and am happy with the progress so far.

My red and black Astra Militarum, the Tartarus 151st, is an army I’ve had for ages. The fluff I wrote for it (and yes, I write fluff for every army I own, lol), is of a death world (Tartarus) much like Catachan but that due to the nature of its sun, plants are red instead of green. Plants are green on Earth because they reflect green light due to the chlorophyll in them. If a planet orbiting a sun with different characteristics, or differences in the atmosphere, caused other wave lengths of light to be best for photosynthesis, it is quite possible they would be any other color. Yes, I am a nerd, but it was a cool concept to me so I ran with it, lol. So, Tartarus is a planet largely covered in red forests and jungles, which is why the models in my army have red and black camouflage.

I loved the Catachan models and fluff, but also the Elysian style of airborne combat. Back in 4th ed, you could pick Doctrines for your IG army, which let you really customize them to fit your play style. So, I made my Astra Militarum army combining both! Air mobile, bad ass jungle fighters. I wanted to weave that into the fluff of my regiment along with including a Space Marine chapter that worked closely with them, too and drew recruits from the planet allowing me to use them all together. Thus was the Tartarus 151st born!

Funny enough, there actually is fluff in the GW cannon about a unit of Elysians and Catachans joining together, the 314th Prosan. Also, please note, the Red Tigers Space Marines chapter is one I made up, not actually in the fluff. 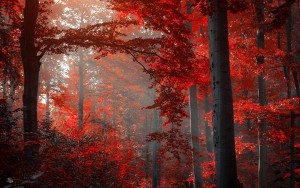 The Origins of the Tartarus Regiments

As with all Death Worlds, Tartarus is a planet most humans would not survive long on. The planet was largely unimportant in Imperial records for most of its existence as what few natural resources it did possess, were not worth the incredible risk associated with going planet side to exploit them. It was most noteworthy for serving as the last stop for convicted criminals sent there to die from populated planets in the sector whose relatively enlightened laws (for Imperial standards) prohibited capital punishment. However, with overflowing hive cities and rampant crime, sector politicians found a workaround to their dilemma: send the convicted to the (barely) habitable Tartarus and let nature take its course. 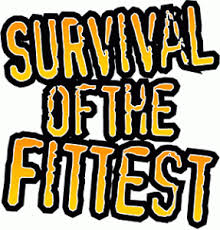 This practice went on for centuries with little thought as to the fate of the prisoners sent to Tartarus. This all changed when one Inquisitor Razmus sent  to investigate corruption at the sector capital discovered not only that the sector governor was planning to succeed from the Imperium, but that several key planets in the sector planned on joining in the uprising, as well.

With only a regiment of Elysian Drop Troops and a single company of the fleet based Red Tigers Space Marine chapter within range to react in time to prevent disaster, Inquisitor Razmus was forced to get creative. The only advantage he had was the element of surprise as his investigation had as of yet gone undetected by the soon to be rebel governments. Following his legendary intuition, Razmus began searching sector archives and came upon the history of Tartarus. Desperate to bolster his forces, he went to the planet to see if any of those sent there had survived and could be useful.

What he found astounded him. Not only were there survivors, but more than could have been possibly anticipated! Those that survived in the wilds of Tartarus were tough, resourceful men and women. Over the years they had gathered into close knit tribes of warriors and hunters. They learned to thrive in the harsh environment and while most that arrived on Tartarus died, those that did not were made of sterner stuff than the average Imperial citizen.

Razmus approached the survivors and though his arrival was greeted with distrust, his offer was a simple one: join him, earn their freedom and a chance at revenge against those who had put them there, or face death by orbital bombardment. The decision was an easy one. 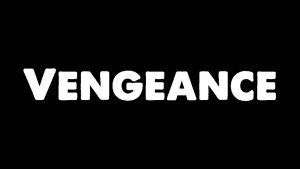 During transit to the sector capital, The Inquisitor ran the Tartarus recruits through a crash course in Imperial combat doctrine using the Elysians that had arrived in-system as impromptu instructors. The death world natives took to the training better than hoped for. They were already physically tough, but had also learned discipline and teamwork during their time on Tartarus as only through working together could they survive the harsh environment.

Upon arriving in position to enact the Emperor’s justice on the would-be rebels, Razmus was notified that the Red Tigers Space Marines had also moved into a strike position on the Sector Capital. Despite being vastly outnumbered, the Inquisitor knew he had a formidable force at his command.

The ensuing battle was brutal, but short. With the element of surprise and a small but elite army of hardened warriors that were able to attack on any front with incredible speed, the planetary defense forces were unable to use their superior numbers to their advantage. While the Elysians and Red Tigers performed with habitual bravery and professionalism, the soldiers of Tartarus exceeded all expectations, proving themselves superior to the PDF forces in every way. Razmus and his forces were able to destroy the sector capital’s army’s leadership, leaving their forces in disarray. This allowed him to capture the rebellious planetary government and then have them publicly executed for treason, and their families striped of all titles and wealth.

The brutal and decisive victory was so swift, the remaining rebels were unable to react. Further Imperial reinforcements began to arrive in-sector and sensing disaster, the remaining would be rebels publicly praised the Imperium’s victory while simultaneously attempting to destroy any evidence of their own involvement. However, it was too late for that as Razmus had already noted their treason and dispatched Imperial Assassins to eliminate the less than loyal. Had his forces not acted so swiftly and the rebels had time to join forces and dictate the battle on their terms, the Imperium would not have been able to put them down without vastly more resources and in all likelihood, the sector would have become a minor fiefdom outside of Imperial control for generations.

In the wake of the resounding success of the operation, Inquisitor Razmus was true to his word. The soldiers were given the choice to return to Tartarus as free men and women or to return to life on one of the other planets of the sector. Some chose not to return to Tartarus, but most did, having either grown to appreciate their hard life on the unforgiving planet and the communities they had formed or seeing nothing they liked back in the hive cities. Razmus commended those that returned and struck a deal with them to provide free and open trade with the rest of the Imperium in exchange for the continuation of a regiment of soldiers from Tartarus to henceforth serve the Emperor. The other planets in the sector would continue to ship their criminals to the planet, and those that survived would add to the tribes of the planet who themselves grew naturally. Thus the Tartarus regiment was born, and would go on to serve the Imperium loyally and with renown.

Further, so impressed were the Space Marines of the Red Tigers chapter with the bravery and tenacity of the Tartarus soldiers, they began selecting new recruits almost exclusively from the planet. The chapter has since become closely involved with the defense of the sector and often work in conjunction with the Tartarus regiments, finding their mobile form of warfare to compliment Space Marine combat doctrine.

So, there you have it! I think it is more fun to come up with back-stories for your armies as it draws you further into the immersion of the hobby. Here are a few pics of the new additions to my force! Also, I attached my list so some of this makes a bit more sense. I have a few points to spare and am getting a few different units for variety. 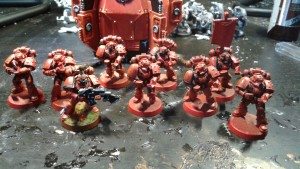 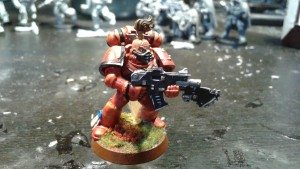 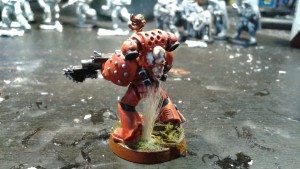 So these are the bog standard bolter slangers from the Red Tigers portion of the army. I use them in this list as the non-heavy weapon equipped devastators in the Skyhammer Annihilation Formation. They have a red and black paint scheme as well as basing that matches my Tartarus troopers, without the camouflage. I use mostly mkV Forge World armor with a mix of normal marines, all with the mkV chest plate and studded shoulder pads. Also, any marine without a helmet has a respirator to give them a unified aesthetic. The only thing missing from the finished marine pictured is a tiger head on his right shoulder pad. 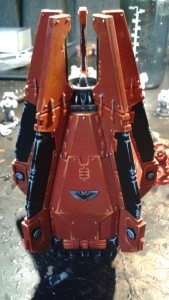 I’ve got 1 of the 2 Drop Pods done for the Skyhammer formation. 1 more to go! 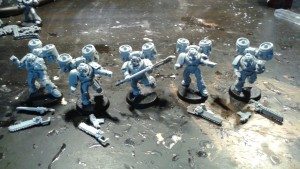 Here’s 1 of the 2 Assault Marine squads in the Skyhammer formation. I am again, using mkV Heresy armor here. LOVE the FW Assault Marines! They look so rad and are very dynamic models. I prime the weapons separately as it saves a ton of time over hand painting them black. 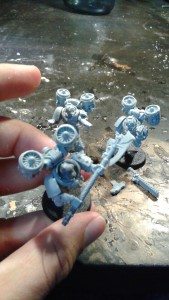 Here’s the Vet Sarge with a beefy power axe I converted up for him. You definitely won’t miss this guy in the unit, lol! 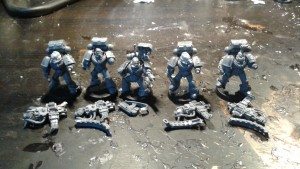 Here’s half the Heavy Bolters from the Skyhammer formation along with a Sarge. I am using 1 unit with regular Heavy Bolters, and the other with Forge World legion Heavy Bolters. I dig the variety and think both styles look awesome so decided to mix it up. 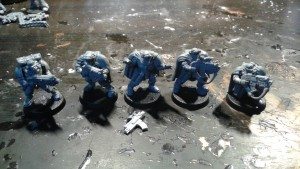 Lastly, I put together a unit of Scouts for the Raptors portion of the list (I still play them as counts as “Red Tigers” for fluff purposes, but they have different Chapter Tactics). I like the cape and night vision goggles of the Sniper Scouts, so I used those but converted them to be holding Bolters. I will be making one more unit of these, some more of my Astra Militarum along with the man himself: Lias Issodon next time.

Thanks for reading along! Another update to come, soon.

28 Responses to “Hobby Blog: Progress on my Airborne Army!”