Knight Gallant or Crusader? To punch or shoot?

You are here: Home › 40K › Tactics › Knight Gallant or Crusader? To punch or shoot? 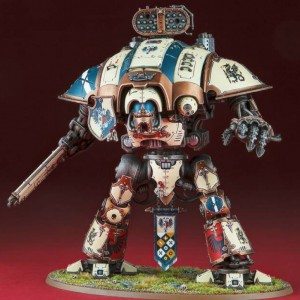 Hey everyone, Reecius here to discuss two of the new Imperial Knights: the Gallant and the Crusader, and which may appeal to you in your list! Be sure to check out the Tactics Corner for more great articles!

Now let me preface this by saying I still love Old Trusty, the Knight Paladin for his versatility, and the Acheron for pure power, but two of the new kids on the block bear special attention due to their specialization.

I am a strong proponent of the single Knight in many lists as they add so much: speed, durability, powerful melee, decent shooting and board control. That’s a powerful mix of amazing benefits and well worth the price tag. In general terms, I gravitate towards the Knights listed above: the Paladin and Acheron, but lately I have been taking a much closer look at two of the more extreme Knights: the Gallant and the Crusader. 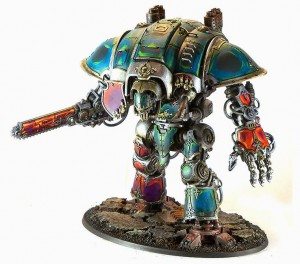 The Gallant is the melee specialist Knight, sporting a Heavy Stubber, Reaper Chainsword and Thunderstrike Gauntlet (both str D, melee weapons), which grants him an extra attack in melee and the funny ability to throw vehicles and MCs it destroys in melee as a large blast weapon with a strength dependant on the toughness or AV of the unfortunate victim. Primarily though, he’s the cheapest Knight, coming in at 325. That’s a significant savings over the other Knights.

Is this worth it to lose a weapons such as the Rapid-fire Battle Cannon the Paladin and Crusader sport? That’s a tough question to answer and will really come down to the composition of your army as a whole. If you’re adding the Knight primarily to serve as a counter-attack unit, for board control, or to apply pressure to your opponent while the rest of your army supplies the firepower, then I’d say yes. That extra attack in melee is pretty dang useful on a D weapon, and not worrying about shooting means you will be running in the shooting phase, closing distance to your opponent more swiftly. The Gallant pretty much plays itself: you run forward then assault and smash.

Now, the downside to this is that if you find yourself facing someone that can handle a knight in melee fairly easily, you may be left kicking yourself. Luckily, not many armies can do that, but those that can will be happy to see a big chunk of your points wasted. I’d say this is a fairly low probability, though. 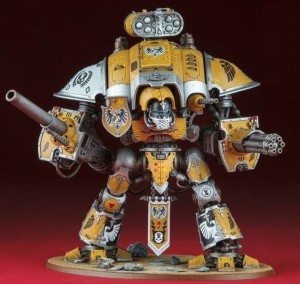 On the other end of the spectrum is the Knight Crusader, which is the most expensive Knight, weighing in at 425 base, and specialized for shooting: sporting a Thermal Cannon (Heavy 1, Str 9, Ap1, Melta, 36″), or the afore mentioned Rapid-fire Battle Cannon (Heavy 2, Str8, Ap3, Large Blast, 72″) for an extra 5pts and an Avenger Gatling Cannon (Heavy 12, Str6, Ap3, Rending, 36″). That’s some powerful shooting, particularly when you consider they are mounted on a fast platform that cannot be stunned or suffer weapon destroyed, and can fire at different targets. You can further boost this firepower with a carapace mounted weapon if you desire, and I’d go for the Stormspear Rocket Pod if anything (Heavy 3, Str8, Ap3, 48″) although it comes at a hefty 40 additional points.

At first, I wrote off the Crusader due to its high price tag, but, after seeing it in action in several tournaments in the hands of skilled players such as Goatboy and InControl, I have had a change of heart. This thing packs some serious firepower and while it loses the dirty D in melee, it retains the ability to stomp which in most cases is the better attack, anyway. 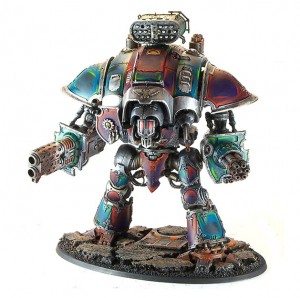 Like the Gallant, the Crusader largely pilots itself, perhaps with a bit more versatility than the Gallant, but still pretty straightforward: you shoot stuff with it, and only engage in melee when you need to tarpit something or really need those stomps. You’re paying a premium for all that dakka, you don’t want to spend turns locked in combat if you can avoid it.

So, is the Crusader the right choice? Again, it will depend on the composition of the rest of your army. If you’ve got an aggressive army that runs up field taking objectives and winning the game in melee, then yeah. The Crusader is a strong back-field unit that can provide a ton of diverse firepower that allows you to engage multiple units and provide multiple weapon types to help you adapt to various enemy units and then jump into combat if you need it to. That’s a lot of value and versatility that some lists will greatly benefit from.

Conversely, he also fits well in a shooting army where he provides even more firepower but can also serve as a counter-assault unit should the need arise. Not bad!

I think either choice is a good one! For me, I am leaning towards the Crusader in my AdMech army, and the Gallant to compliment my Astra Militarum. What’s your favorite Knight to use and why?

My White Scars army currently contains the Errant (Thermal, Chainsword, carapace stubber, no upgrades). The only reason its an Errant is because my list fits an Errant perfectly point-wise and I need the Thermal cannon for the high Strength and AP. I have a Stormtalon and Stalker (which has served me greatly against Eldar, Necrons and Tau although still not sure if I should keep it) in my list to free points to get a Crusader.

The reason to not change to a Crusader for me is that some drop pod or heavy anti Melta/Haywire armies such as the war convocation with flesh tearers (which I also play after seeing incontrols list) can easily take out a Knight by putting those Haywire shots in the back of the Knight (usually where there is no shield). Another reason I have an Errant is that some tournaments here in the Netherlands don’t allow LoW to exceed 400 points which is a total bs tournament rule…In every GW I’ve played across the country people are fine with any Knight as it doesn’t break the game…the frustrations here…

If I would play a Crusader I would probably give it a Thermal cannon, Avenger, Icarus and a carapace stubber. I would let it sit in the back and snipe things down that threaten my bikes. Like Necron wraiths or Eldar serpents that carry the D.

I think the Gallant is the most fun to play though. Just charge in at the frontline and force your opponent to put all hes got into the Knight before it can charge at him. Funny thing is, as I’ve said before if an army has a reasonable number of high Strength/Haywire/Melta shots the Knight will go down easily and sometimes the low initiative means it won’t swing back if the opponent can commit to it. The good thing is that the rest of your army can probably do whatever they need to do more freely. But that’s an expensive distraction carnifex if you ask me. For IG I think this is a good thing though and it fits more easily in an IG army than a SM one.

Lastly I totally agree with you on that a Knight is almost always a ‘best’ choice to include. They do so much for any Imperium army. Heck almost every tournament list this year has one Knight. I just want to say to cooper: try a Knight in your white scar list! They’re great and will support your bikes very well 😀

I use the crusader with the rapid-fire battle cannon and stormspear rocket pod in my skitarii/marine list. It is the MVP in most of my games. In the 15 games I have played with the crusader it was only destroyed once, worth the points IMO.

I adore the knight Lancer and the castigator, but with the inclusion of the amazing 5 point melta gun upgrade and carapace weapons the classic knights are pretty badass.
the cerastus chassis is so fantastic because of the 3d6 add them together run move and the base four attacks…Movement is such a huge key to winning a game its hard not to fall in love with them… about the only thing they can’t chase down easily is elder jet bikes.
The Castigator is the king of killing invisible units[un nerfed invivsbilty.. I still play vs that but I either take on or two of these or a cullexes in a plane so .. people don’t bother so much:)]
He auto hits everything in base contact at i2 and every wound that goes through gets him more free hits[strength10 ap2.. but it’s not that bad:P] and of course stomp doesn’t care about invoice either.

the lancer is sweet because he’ll kill pretty much any single model in the game on the charge he gets 7 str7 ap2 shots with concussive, adds +1 initiative on the charge and gets a 5++ invuln in combat while reducing the to hit of any Gc’s or super heavies by 1

I’m putting together some of the new knights and am looking to play test them more, but I love that each one has a role and that, pretty much every formation has a place and can be used well

I use the castigator as my beat stick and the crusader as my fire platform when I’m running more than one knight, If I’m running three I use a paladin also which gives a happy medium.

Also if you are running 3 or more knights choose either the lancer, castigator, or gallant as your baron and use blood angels with a couple of librarians for quickening (hopefully unleash rage also) and watch the baron go crazy in melee lol

oh.. I’m more than aware of that particular move:) dang it’s sexy on a lancer!

I don’t need to buy another knight 🙁

I wish the Chaos Knights got the other variants too! 🙁

I’ve been at the hands of Goatboys Crusaders and man are they nasty!

Reece I agree completely. I liked the Gallant right away for its extra CC and price tag to go with armies that did not have a great CC answer, but the Crusader I skipped over at first as I thought it was TOO expensive, but after seeing in action from capable players in games and tournaments I too have taken a second look at it. I think it is a viable option in the right lists. cheers and thanks for the great article.

Glad you got something from the article!