The votes are in! See the results, here.

Thank you to everyone that cast their vote in the 2015 ITC Quarterly Update. We hold these quarterly adjustments in order to adapt the ITC format to new material as it comes out, changing attitudes in the community, and changes in the tournament meta. We believe that a democratic approach to decision making enables ITC attendees to have a degree of self-determination and a voice in defining the tournament format they want to participate in.

Once again, I find it affirming to see that time after time, folks vote not in their own interest, not to give themselves an advantage, but with what they think is fair. That’s a testament to our community. Without further ado, here are the results: 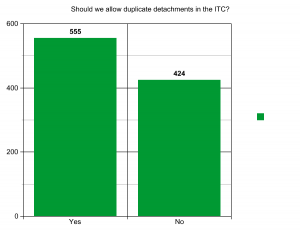 It took a while for folks to warm up to this, ourselves included, but there you have it. ITC participants are ready for duplicate detachments! Change ahead, and positive change at that, IMO, for armies like Tyranids who can really benefit from having access to multiple CADs. It also allows for some very interesting ally combinations that may not have otherwise been possible because a certain faction did not have access to a CAD like detachment. Conversely, this also means some powerful formations can and will be duplicated such as Firebase Cadre, Seer Council, or Skyhammer. However, after a great deal of debate and thought on the topic, the team decided that you already could accomplish essentially the same things without doubling down on most formations, or through allies. In other words, it won’t have a massive change on the way the game plays, now, in our opinions. 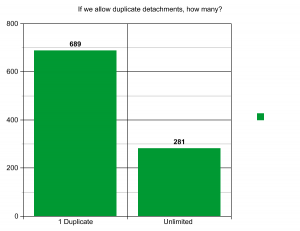 The ITC community was ready for change, but not ready for too much change! What this means is that you can double down on a single detachment. So, 2 CADs, or 2 of any Formation, or 2 Allied Detachments, etc. but not 3 of a kind, etc. I agree that this is a good path, and it brings us more into alignment with NOVA format events, which is awesome as it makes it easier for folks to cross over from event to event. 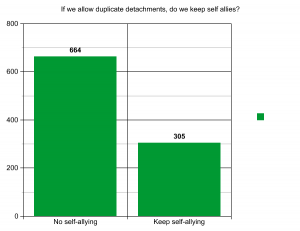 The BRB states you cannot take an Allied Detachment that is the same faction as the primary detachment (which is that detachment that holds your Warlord), however in the ITC we have ignored this rule because we did not allow duplicate detachments previously and to benefit those armies with little or no access to allies. Now that we are allowing duplicate detachments, we had to ask the community if they wanted to keep the rule change or play by the book. They chose to play by the book. So, going forward, if you take an Allied Detachment, it cannot be the same Faction as your primary detachment. 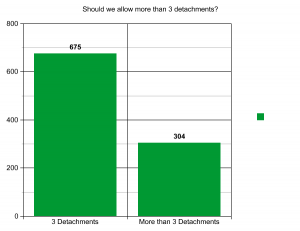 The majority decided to stay with the status quo, and stick with 3 detachments. I actually expected it to go 4, but I am fine with 3. It presents enough limitations to have to make some fun, creative decisions during list building. 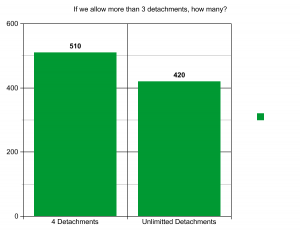 This question is moot due to the outcome of the question above, but we see again ITC participants lean towards the more conservative option in list building. 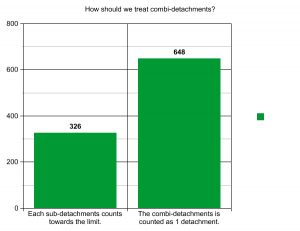 I was very interested to see how the wind would blow on this one. I could see folks feeling that combi-detachments were unfair, but clearly that is not the case. So, if you play the War Convocation, or the Decurion detachment, etc.. your army is good to go! 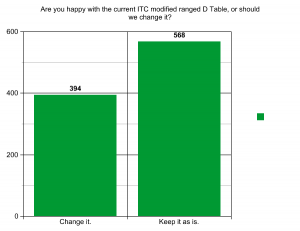 We’ve had three months to play the current ITC Ranged D table, we wanted feedback on how people felt about it. Seems from this result, folks wanted to keep it as we have it, now. 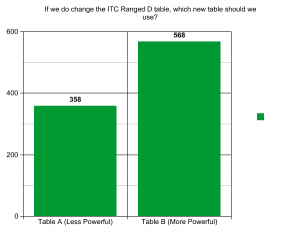 These results make we wonder if question 7 may have confused a few people. The reason being, that here, we see a clear majority in favor of a modified ranged D table that is MORE powerful than what we have, now. So, let us know if you voted and were thrown off by Question 7, because that overrides this question, meaning that as is, we stick with the current ITC modified ranged D table which is less powerful than what most folks seem to want. 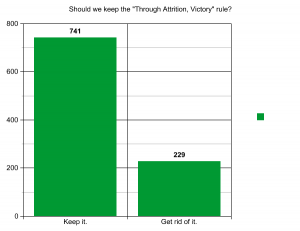 A number of folks have expressed the sentiment that the +1 Maelstrom point we grant in the ITC for each HP/Wound you deal to a Super Heavy or GC LoW may no longer be needed. However, as we see here, the vast majority of folks want to keep it. I believe this to be a reaction to Wraithknights and Imperial Knights, personally. I voted for this rule to go away as I feel it isn’t needed any longer, but, I do understand the sentiment to keep it. Wraithknights are everywhere, and they are crazy under-priced. Folks facing against them probably feel that this rule is a balancing act to counter the power of these units. Fair enough, the rule stays. 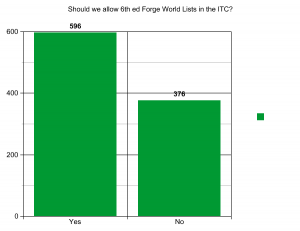 I get asked about these army lists VERY frequently, so the results here do not surprise me. I love FW models, units, army lists, so for me, this is a lot of fun. In practice, we will rarely see these army lists. Wwe almost never do, now, at the BAO, we had 2 of 134 players actually using a FW list. There are some cool options in there, though, for players willing to investigate. I love Elysians and the D-99 lists, personally. I see this bringing more fun and variety to our games! 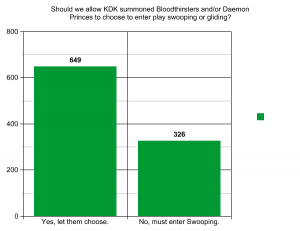 This has been a hot button issue, lately and a classic RAW vs. RAI argument (as are all of the remaining issues). I’m happy to see the community choosing to lend a hand to their KDK friends, and go with the RAI interpretation on this one. Again, this to me shows that folks do not vote in their own self interest. Obviously, 66% of all ITC participants are not KDK players, yet that many were willing to vote for a ruling that benefits them. That’s a good thing, IMO, and it means we as a community care more for doing what we think is fair than what may benefit us, personally. KDK players be stoked! In ITC events you can realistically summon your big boys and have then actually participate in the game! 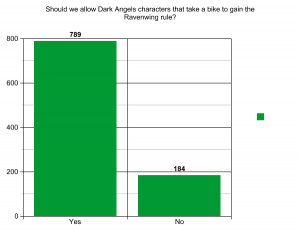 Blowout community reaction to support RAI on this topic, again, just as with KDK. I think this was the right call and again, shows the community looks after its own. Hey, Dark Angels players, yes, you can actually slap some more HQs into your Ravenwing armies or take someone other than Sammael! 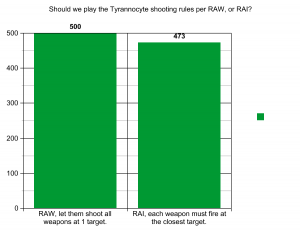 Our closest vote! I got asked about this one much more frequently than I thought I would. Apparently a lot of Nid players really wanted their Tyrannocytes to be able to shoot a single target! I get it. I think RAI is clearly against that, but, I am totally cool with this rule being overturned (which the ITC inherited from the FAQ Council/INAT). Tyranid players, get pumped! You now have some options for alternate ways to deliver your beasties into the fray that will also pump out some damage in the shooting phase. 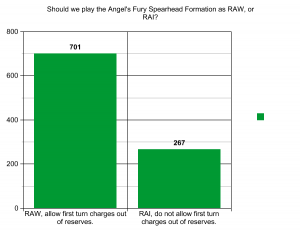 Another inherited ruling that ruffled quite a few feathers when we made the call. This is again, a RAW vs. RAI debate. RAI is, IMO, quite clear that this formation should not allow a combo charge out of reserves using it and Drop Pods. However, RAW is clearly that yes ,they can. We presented it to the ITC community and for the 4th time on 4 topics, the community voted to help out their neighbors and the Blood Angels do get to use their cool Formation in the way most folks probably want to use it. Just be prepared, this means Hammernators potentially first turn charging out of reserves if you happen to find yourself facing it.

Well, there you have it! The ITC continues to evolve. The next update will be the first week of Novemeber and will be the final fine tuning before the LVO!