You are here: Home › 40K › Rawdogger’s List for Review

Rawdogger here to talk about a list I’ve been toying around with these past couple weeks.  Now that the terrain factory in the Martinez store is over and done with and we’ve gotten the place cleaned up again, I’ve actually even been able to get some games in, which is a rarity for me nowadays.  You can even watch a video of me here playing Steve the Architect and getting thoroughly trounced to the sound of Steve’s tape measure snaps.   Despite my losing nature and tendency to surrender at even the slightest sign that things are going south, I actually do enjoy playing against competitive players in a competitive atmosphere.  In fact, one of the reasons I usually do so poor in competitive 40k tournaments is the fact that I abhor playing against the game if it is not in a tournament type setting.  Real chicken and egg shit, if you ask me.  Anyways, I’ve played around with a couple different things but the list that I keep getting drawn back to is the Centurion Star and its many variants.  The list has a lot of power behind it, and with the right allied combinations has the potential to be a top table army.  Though powerful, it does suffer from a myriad of weaknesses ranging from drop grav spam to a low model count.  I’ve kept all these weaknesses in mind when writing out the most recent iteration of my Centstar.  But enough of this confusing literacy.  Onto the list! 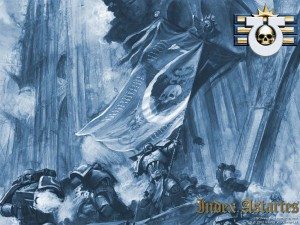 Tigurius -Not only a badass Lv.3 psyker with access to the all important Telepathy powers, but the dude can re-roll failed psychic tests for reasons.  Most importantly for me, Tigurius comes with the Storm of Fire warlord trait, which allows him to select a unit every shooting phase and give them the Rending special rule.  Can I have 24 twin linked rending Hurricane Bolter shots from the Centurions for my birthday, mommy?

3x 10 Scouts, Combi-Grav – Having either 3 units of 10 or 6 units of 5 Scouts infiltrating and scouting before the game begins can REALLY put the hurting on your opponent.  I like to give the Sergeants Combi-Gravs so that any foolish opponent putting a high value, high armor save unit out in the open potentially gets a nasty first turn.  Ultramarine Doctrines let you pop the re-roll 1’s to hit at an opportune moment.  You can keep these guys in reserve to Outflank if you opponent has too much killy death on the table for you to handle such as Scatterbike spam and Tigurius makes sure that they come in when needed due to his Master of Prescience special rule.

4x Centurions, 3x Grav Cannon, 1x Lascannon, Omniscope – How much do I have to say about these guys?  They will absolutely murder anything within 24″ of them and with the special sauce of Draigo’s Gate of Infinity psychic power they have an absolutely huge threat range.  Though super hunky these guys WILL fall to mass small arms fire or AP2 weaponry so don’t hang your nuts out there too freely or you might just get them pinched by your opponent.

Imperial Bunker, Escape Hatch – This is a new addition to my list.  Since everything in this army can either Outflank or Deep Strike except the CentStar and character pals, I’ve found that it is sometimes necessary to put them in something that can keep the drop grav and scatter spam at bay for the first turn.  The escape hatch helps get me up the field after the first round.  The Bunker is still susceptible to drop melta so it’s important to try to position the bunker with it’s back and sides blocked in so the only place to drop that melta is right in front where there are fire points and Coteaz can utter ‘I’ve Been Expecting You’. 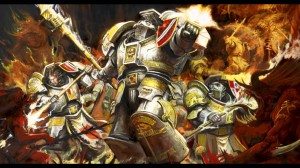 Librarian, Lv. 3 – Homeboy adds another 3 psychic dice to the pool while rolling on Telepethy if Tigurius doesn’t get Invisibility (I’m a wanker).  If Tigurius does get Telepethy I usually will roll on the Sanctic Daemonology to try and get the Sanctuary power in order to boost Draigo’s invulnerable save to 2+.  He also adds two 2+ saves to the CentStar unit.

5x Terminators, Incinerator – My troop tax for the Strike Force.  These guys can definitely pack a wallop with the ability to run and shoot the turn they deep strike due to the Nemesis Strike Force special rules.  Hitting a weak backfield unit with the S6 AP4 (Sooooouuuulll Blaze) flamer the turn they deepstrike in definitely will bring a smile to your face.  They aren’t bad in combat either, able to boost their strength to 6 with Hammerhand and having AP3 Force Swords.

Nemesis Dreadknight, Personal Teleporter, Heavy Incinerator, Heavy Psycannon, Nemesis Daemon Hammer – These guys taken in the Nemesis Strike Force with the ability to deep strike in turn 1 and then run and blast the ever living shit out of whatever the hell is in it’s way really are a go to for me.  It’s important to think of these guys as T6 4 wound Terminators, though, and you WILL roll 1’s so try not to throw them right in the line of fire of your opponent’s entire army unless you want to see your 220 point bad ass disappear faster than Frankie on read aloud day in grade school.

Muth’Fuckin Draigo, SON – The man, the myth, the legend.  Draigo brings the all import Gate of Infinity psychic power as well as the Eternal Warrior special rule.  He’s an outright beast in combat with a base strength 7 AP2 Master Crafted Force Sword that can be boosted to S9 if he gets off Hammerhand.  Draigo makes opponents think twice about charging into the otherwise underwheming in combat Centstar. 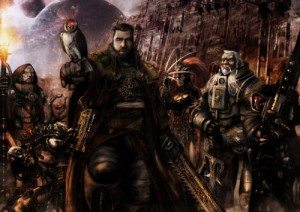 Coteaz – Coteaz brings so much to this army it’s ridiculous.  Most importantly, Coteaz provided Deep Strike protection in the form of I’ve Been Expecting You which allows him and his unit fire out of sequence at anything that arrives from reserves within 12″ of his model.  He also lets you re-roll your seize roll and makes your opponent re-roll theirs.  He brings the Stubborn special rule to the party and most importantly, his asshole Cyber Eagle that will peck the ass off your face.

Inquisitor, Psychotrope Grenades, 3x Servo Skulls – Another recent addition to the list.  The base Inquisitor brings servo skulls to counter the rise in White Scar Battle Companies we will be seeing in upcoming tournaments.  He also has Psychotrope grenades to make the opponent think twice about assaulting the unit since any roll on a 2-6 will be detrimental on the first round of combat.

So what are your thoughts on the list? I’ll be attending several tournaments as we head into the fall and would love to break the top 100 in the ITC rankings before the Las Vegas Open in February,  How can I make this list better?  Is it possible that I am a godly list writer with big oily muscles and no improvement is necessary?  Does my breath stink?