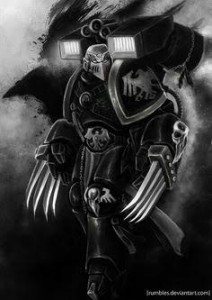 I’m not one that will be found trolling the internet looking for the next greatest net list.  Nor am I one that will be found skulking BOLS or Dakka stirring up GW hate.  I am however, one that listens to a great many podcasts to get the latest news, rumors, and discussions on tournaments and hobby in general.  Since the creation of chapter tactics everyone has mentioned time and time again that the Raven Guard were getting the short end of the unlucky stick in comparison to the other founding chapters.  Their minds go back to 5th edition reminiscing on the glory days of when Raven Guard was “good”.  The new rules don’t represent the chapter, some other founding chapters tactics like White Scars better suite them.  How come the White Scars can do Raven Guard better than the Raven Guard?  I’m sure you’ve heard all of this before.  The crushing negativity that weighs so heavy on my favorite founding chapter’s heart.  Well it’s a damn good thing they have two then giving them the strength to overcome. 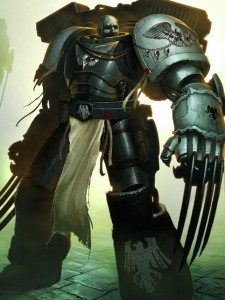 When I first saw the change to the rules in 6th edition I too wondered what Games Workshop had in mind.  Then when the 7th edition codex dropped, I let the same negative outside influence my thoughts on their new rules before I even looked at them.  I cracked open the book and I skipped over them and went straight for my trusty old Imperial Fists thinking maybe I’ll have to wait until the next codex to get it right.  Then a few weeks later I gave their tactics a glance.  Then after a few days I gave them a glance again and eureka!  Games Workshop nailed it with their tactics.

Hey everyone I’m Peter from NGC40k.  I’m a long time gamer that has moved through all aspects of this hobby we love.  Starting out as a garage gamer in the early 90’s, moving on to a tournament player during 5th ed and again moving on to my current status as a narrative gamer.  Ninjas and Tigers, it’s what every boy loves right!  We then grow up to like the Raven Guard and some of us even closet root for the Bengals, but I digress.

What do we know about the Raven Guard?  They are one of the founding chapters, the XIXth Legion.  They were led by a cunning Primarch, Corvus Corax.  Before the Heresy they were known for their speed, stealth and precision.  The drop site massacre on Istvaan V left their legion decimated, forcing them to pull from the fight until they could bolster their numbers.  Even then they did not let this stop them from participating in the war.  They became masters of the unseen war, guerilla warfare at its most extreme.  The Raven Guard stalk and study their prey from the shadows and wait for the perfect moment to strike their foe in a bloody, yet brief assault.  Because of their fighting style they are known for their infiltration and expert close combat skills.  They make heavy use of scouts and jump pack equipped assault troops.   .   . Yes, yes yes Peter, we all know this about the Raven Guard!

If you want more background on the Raven Guard go to wiki.  Don’t take my word for it, Reading Rainbow.

Since we are all now semi experts in the fluff surrounding the Raven Guard, let’s revisit their chapter tactics in their current state.

Strike from the Shadows: Non-vehicle models that are not in a transport receive the shrouded special rule first game turn.  Furthermore, night fight happens on a 4+.

Winged Deliverance: Jump units can use their packs in both movement and assault phases of the same turn.  They also reroll failed to wound hammer of wrath hits.

First let’s look at the names of their tactics; Strike from the Shadows and Winged Deliverance.  The names alone speak Raveny goodness to me.  Who would benefit the most from these rules?  Sorry, must take a break for a peanut butter filled pretzels which taste so good with a cold pint of Smithwicks.  Anyhow, who would benefit the most from these rules?  The second one is obvious: jump pack assault troops.  The first one not so much.  We all can imagine certain scenarios when the Strike from the Shadows rule would be handy.  I think about the possibility it gives all the time.: Scouts my 40k loving friends, Scouts!   And Scouts have received a bump in this edition making them even tougher.  You get a lot of scouts in camo cloaks with combat knives and bolt pistols, throw them in the face of your opponent first turn and watch them play out their panic on the table top.  Now you have a unit that gets a 4+ normal and a 3+ cover save with a 50% potential of having a 2+ cover save first turn.  Combine this with the scout and infiltrate special rules and you have a wall of hurt within 12” of strike distance.

Jump pack troops quickly moving up, scouts ghillie suited up, sneaking into the enemy’s lines, and all of these units are shrouded.  This screams Raven Guard!

I threw together an example Raven Guard list using the units that benefit the most from their tactics.  It’s a Maximum Threat Overload (MTO) list that is designed to hit very hard 2nd turn.  And hey, it turns out its super fluffy too.  I know this list will have its issues with death stars, Lords of War and other such things, but there is enough here that you can avoid these units and decimate the rest of your opponents army and deal with the death star and LoW in later rounds. What do you guys think about it?