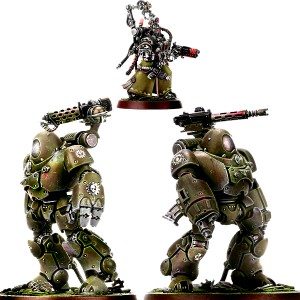 Hey everyone, Reecius here to discuss a formation we’ve been talking about quite a bit here at Frontline Gaming. Be sure to check out the Tactics Corner for more great tactics articles.

The Cohort Cybernetica is a formation found in the Cult Mechanicus book, which has largely been glossed over in the general flurry of releases we’ve had, lately. However, there’s a lot to love in that book. I’m sad the unit I was most pumped for–Electro Priests–are a bit of a let down stats wise. But, that’s OK, I will still use them on occasion for cool factor, alone! For a review of the entire Cult Mechanicus Codex, click here. This tactica will focus specifically on the Cohort Cybernetica Formation.

The Cohort Cybernetica is a formation consisting of 2 units of Kastelan Robot Maniples, and a Tech-Priest Dominus that all come together to form a single unit. This gives you a baseline of 4 Robots, 2 Datasmiths and the Dominus. The Dominus counts as a Datasmith for Battle Protocols, which is a nice bonus, and so long as he is alive, you can opt to immediately change your Protocols. This is cool because it means you can switch to defense right away if you need to with FnP and not have to wait till the start of your next turn as is normal with Battle Protocols. That’s a big, beefy unit, right there! Let’s break down some of the benefits of this very cool unit. 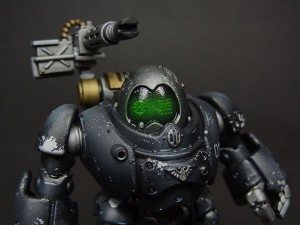 You’ve got 4, T7, 3 wound MC’s to start with, all of whom have a 5++ vs. shooting which on a 6, bounces the shot back at the unit that fired it. You’ve also got 3 characters that all have multiple wounds, FnP and a 2+. That’s a great base to start with. On top of this, you also get FnP on the Robots due to their Battle Protocols. To increase the durability even further, you can also heal a wound a turn on a 2+ with the Dominus’ Master of Machines ability to any model in the unit, which is very useful. Furthermore, you can give the entire unit IWND by giving the Dominus the Autocaduceus relic. Not bad! So long as any model in the unit survives, you’ve got very good odds of healing them back up. Lastly, you’ve also got the very powerful Canticles special rules, which can grant you Stealth and/or Shrouding on a critical turn.

The 2+ characters are awesome for tanking wounds, particularly form shooting as with majority T7, FnP and a 5++ or 4++, the ability to LoS! wounds around the unit and their regenerative abilities, this unit can be very durable.

The unit also packs a wallop. In the shooting phase, you’ve got a lot of options. The Robots each come stock with an Incendine Combuster, which is a flamer with Torrent. That’s pretty awesome, actually. 4 Flamers with Torrent from a single unit can do work on light infantry, and the extra reach of Torrent means you will cover a ton of models with the templates. The stock weaponry is not a bad choice, at all. Conversely, you can up-gun to carapace mounted Heavy Phosphor Blasters, which are 36″, Str6, AP3, Heavy 3 weapons with the Luminagen special rule. If this weapon does a successful wound to a unit, it’s cover save goes down by 1 for the rest of the phase. Further, units assaulting a unit that suffered one or more unsaved wounds, can reroll their assault roll. Great for people like me who tend to fail charges! Also, if you combine that with other cover reducing items such as Omnispex or Auspex, you can drain  aunit’s defense, rapidly.

You can also opt to swap out the dual Power Fists the Robots come with stock, for a twin linked Phosphor Blaster. This gives the unit a decent amount of shooting, but I honestly do not feel that this option is worth losing the mighty strength 10 attacks the Power Fists grant. The Robots BS3 is mitigated a bit by both their Battle Protocols which can allow them to shoot their carapace weapons twice if they hold still, and Canticles which can allow them to reroll shooting attacks.

On top of this, the Datasmiths have Gamma Pistols, which are strength 6, ap2, Armorbane pistols. The Dominus sports a host of guns, a Macroblaster (Str4, Ap6, 5 shots, Pistol), Volkite Blaster (24″, Str56, ap5, Heavy 3, does additional Str6 hits for successful wounds caused) and can take a Phosphor Serpenta (18″, Str 5, ap4, Luminagen) or Eradication Ray (0-12″, Str8, ap1, Heavy 1, 12″-24″, Str6, ap3, Heavy 1, Blast). That’s a lot of dakka, and a lot of versatility. I personally prefer the stock load-out on the Dominus in most cases, but the Eradication Ray is not a bad choice as an upgrade at all as it pairs with the Phosphor Blasters of the Robots fairly well, but then, so does the Volkite Blaster. What option to go with will largely depend on preference. A final benefit of this Formation in the shooting phase, is the ability to have any of the Datasmiths or the Dominus opt to not fire, but then allowing one of the Robots to fire at a different target. This means the unit can fire at 4 different targets if it wants to, which just the base number of models. 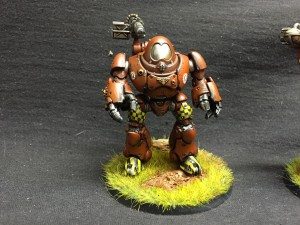 In melee, this unit can really pack a punch. The Robots lose their 5++, but will often have FnP due to Battle Protocols. This can be a bummer as everything in the unit swings at either I1 or 2, so they are slow. Something with a lot of high strength, low ap attacks can really take a bite out of them before the swing. When they do swing though, each Robot packs 4, Str10, ap2 attacks on the charge, which they can boost up to 6 with their Battle Protocols. The Datasmiths each have base 2 attacks and a Power Fist plus a Dataspike which grants them a single I10 Haywire attack. Lastly, the Dominus sports a Power Axe. That’s a lot of ap2 weapons and high strength. Canticles can allow you to do additional strength 4 hits in melee, reroll misses in combat, or increase your strength. You could also take some of the Relics to increase the punch of a unit such as the Uncreator Gauntlet or the Pseudogenetor. I’d pass on these, personally, although the ability to slay a Knight in a single hit with the Gauntlet, is pretty cool!

There’s a ton of options here, but personally, I would go with just the base number of models to make the Formation: 4 Robots, 2 Datasmiths and the Dominus. Base, that’s 685pts, which is a hefty investment. I’d opt for the Carapace Phosphor Blasters, personally, as it buffs the rest of the army’s shooting with the Luminagen rule. Flamers are certainly not a bad choice, though.

The Autocaduceus is a no-brainer for me. A unit like this with IWND becomes very resilient. That puts you at a total investment of 735pts. I’d add in a Conversion field for the characters, bumping their invul saves to 4++ for a measley 15pts, total, taking you up to 750pts. Personally, I’d stop there. That’s a big investment! But, not much can really scare you beyond attacks that ignore cover and that can deal a lot of damage, such as Grav Centurions. Most other attacks simply don’t do enough damage to you, and with the regenerative ability of the unit, you have very good odds of healing back up.

The Mask of the Alpha Dominus bears consideration. At15pts, it isn’t overly expensive and it allows you to perform an emergency Battle Protocols swap, changing instantly from one to another which in the right circumstances, can be hugely beneficial. This is very useful for situations where you need to swap form strong offense to defense or vise versa. The trade off though, is losing the Battle Protocol you swapped from for the rest of the game. Ouch.

Now, if you wanted to, you could add as many as 8 additional Robots and/or 4 additional Datasmiths. That can be quite good, but I do not think it is necessary. At most, I would add 1 more Robot, but that is taking an already expensive unit and bloating them further.

Edit: after having played with and against the unit, the twin Phosphor guns are actually quite good! Mixing in 50/50 or even 75/25 guns to fists, is a great idea as they can all shoot different targets and give you a lot of firepower while still retaining AP2 attacks in melee due to being MCs. 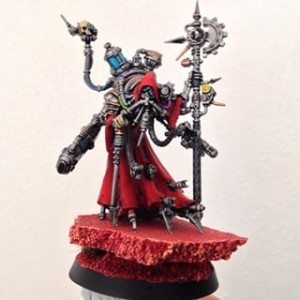 This is a strong candidate to house your Warlord. The reason being that the Dominus is very hard to kill already, plus buried in a unit of regenerating Robots that make the unit majority T7 really helps to keep him safe. The Cult Mechanicus Warlord traits are quite good, too, particularly the ability to gain Eternal Warrior, reroll FnP, and the ability to choose what a Mysterious Objective is. Getting Skyfire against the right opponent can be game winning. 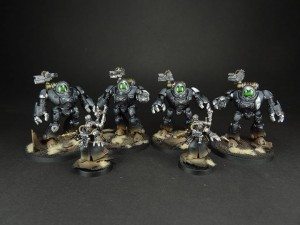 This is a great standalone unit to plug into a wide variety of armies. Any shooting list will benefit from a resilient unit like this that can move into the midfield and hold the center. The unit requires very little support due to all of the special abilities it comes stock with, but obviously psychic buffs like Invisibility, Prescience, etc. all add a lot to it. Any way to grant them Scouts or Infiltrator–such as with Lias Issodon’s Warlord Trait–help a ton as they are slow, which is their main weakness. However, they’re strong enough with their shooting to contribute during that phase and their melee can be very scary, typically forcing your opponent to stay way from them, thus granting you board control.

You want to avoid units with high powered shooting that ignores cover as much as you can, and units that can really take a bite out of you in Melee that swing before you. However, not much can chew through all of those FnP wounds before the Robots pound them into dust at I2, which helps avoid things like Stomps and D-Thirster’s axe of death. Especially when using LoS! to spread wounds around, you will notice this unit takes a big hit and then delivers it right back.

All of the various special abilities the unit has are awesome, too. They’re like psychic buffs that don’t require a roll. You can increase defense, offense and combine them together to really get big boost such as rerolling their to hit rolls with a Canticle while also boosting the number of attacks the Robots get with Battle Protocols.