Death Company and Me – A Psychopath Like No Other

You are here: Home › 40K › Tactics › Death Company and Me – A Psychopath Like No Other

Rawdogger hear to talk about an old school unit that still kicks a lot of ass and takes very few names (because they are too busy kicking asses) the classic Death Company.

Now, a lot can be said regarding the overall Blood Angels codex release about a year ago.  Some people might say it’s ridiculously underpowered.  Others may say it is the worst codex to come out since Chaos Space Marines 5th-7th edition.  Still more probably say that the Blood Angel codex is about as useless as bringing a Blood Angels list to a competitive 40k tournament.  One thing that we can all agree on is that Blood Angels codex is a real piece of shit.  It breaks my heart to write that, truly it does.  I’ve been a Blood Angel fan and player for most of my Warhammer 40k career.  I own three Baal Predators.  THREE!  Since they are now a heavy support choice for some reason they’ve been unceremoniously binned with the wtf fast attack Assault Marines. Who else owns a metal Captain Tycho, HUH?  CAN YOU TELL ME THAT?   While there is almost nothing good I can say about the overall Blood Angels codex release, there are a FEW exceptions that can be made. One of those would be the Death Company. 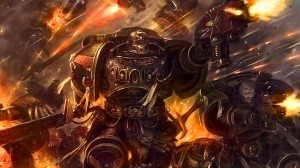 Who doesn’t love these guys?

Let’s start with some of their stats.  They have the basic Space Marine stat line except they have an additional base attack.  They actually went down in WS in the new edition but it’s not that big of a deal since they also went down in point cost.  A unit of 5 costs 100 pts and you have the option to add 10 more at 20 pts per model.

Let’s look at their swag.

The unit has the option to ditch their bolt pistol for bolt guns at no extra cost but I wouldn’t do that since the bolt pistol and chainsword combo gets you base 3 attacks.  Any model can take a melee weapon but that can add up quick.  I generally give one guy a power fist and another a power sword and call it a day.  There are no characters in the Death Company so you don’t have to worry about your melee weapon dudes getting singled out in CC by a Chaos Space Marine sergeant.  SNAP!  The best piece of wargear that the Death Company can take is the Jump Pack, which costs 3 points per model.  I think it’s almost an auto take for this unit since you’ll want to get them engaged in close combat as soon as possible.

How about them special rules now?

So now that we’ve gone over what makes these guys tick, here are a few tips and tricks for getting the most out of your psychopathic Space Marines.

So there you have it.  The proverbial diamond in the turd that is the Blood Angels codex.  I hope this article shed some light on one of the most classic and underrated units in the game.

What are some of your favorite ways of running your Death Company Squad?