Hello everyone, Pablo “Mustachio” Martinez here bringing you guys something I sincerely wish I had access to when I first started the hobby: good coverage of community events, and tournaments.

I know there is content all over sites like Frontline, Dakka, and Torrent of Fire however when I first started the hobby I didn’t know where to look online. As a long time competitive Magic:The Gathering player I was spoiled with thorough coverage and content of all the latest deck lists, players, strategies, and major tournament scenes. The Warhammer 40k community does exist, and I hope that you readers can all help me share it with anyone interested in joining the 40k tournament scene. I believe that a thriving tournament scene is a great gateway for new 40k players to get into all aspects of the hobby. An event like the BAO is a perfect example of gamers getting together and geeking out on something they all collectively love, and with proper coverage I hope to show anyone who is willing to take a look that a tournament is, in the words of long-time 40k veteran Warboss Dugg Johnson, “All about goofy fun!”

Doug is no stranger to big tournaments. This is his 4th BAO and probably 20th major event. He has traveled the world, spent endless nights assembling, and crawled many pubs to become the grizzly vet he is today. 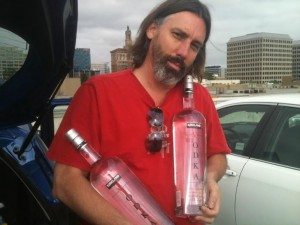 So when I cornered him in the parking lot to pick his brain for anything not covered in dust and 40k related I knew I would get a good perspective on the event we would both be attending. Doug brought a fun list which he would normally never run, Chaos Renegades and Chaos Space Marine allies. The idea behind his list was to have fun summoning demons, blowing up psyker brains, and accumulating blood for the blood god via copious amounts of artillery flyer and heldrake flame. Of course the entire time he was telling me about all the cool combinations his list could do I couldn’t stop staring at the two HUGE bottles of vodka he had lying in his trunk. A good balance of competition and tomfoolery is a great mindset to have going into a major event like the BAO, and Doug mastered the art of it.

San Jose Based 40k team “New World Order” (NWO) understand that community is important, and along with healthy amounts of drunken procrastination practices, so is winning. As the formerly number one ITC ranked team they certainly know how to play competitive 40k, and two of their team members even made the top 16 ending day one. However they also are one big happy family. They lend each other models, bounce ideas off each other, and have modeling and painting sessions. New players who want to attend events should consider looking up some of these teams, and maybe socialize with them on forums or facebook groups to see how they fit in. Who knows, some people might even make a new friend or two. For those of you interested, a good place to start is either here in the frontlinegaming forums, or the ITC ranking website where all the group rankings are posted.

As a magic judge at minor magic events, I always felt like it was very hard to please every player and to do my job as impartially as I could. Players always had different opinions, or rules interpretations and arguments. The BAO was no exception to this, as there were plenty rules arguments and debates to go around. The difference between a magic tournament and the BAO was not in the ambiguity of the rules, but in the way the community handled disputes. In magic the sounds of players shouting “judge!” and sights of raised hands reminded me of a bunch of elementary school kids bickering about simple things that could be fixed if they had normal common sense adult brains. 40k as a community handles disputes a lot more maturely. You would talk it over with your opponent, maybe ask someone next to you, consider rolling a dice, and lastly walk over to a more reputable player’s table and ask them. That last one was especially prevalent at the BAO. I couldn’t count how many times I would watch a rules dispute be resolved in front of me without my interference because someone like Geoff “Incontrol” Robinson, or Jim “Jy2” Yeh were already there to lend their knowledge of the game to the players. That kind of community between high-caliber players and people who are just starting the hobby are unprecedented in a lot of gaming communities.

The BAO has come a long way since its debut 5 years ago, in a barn, 100 players strong, and plywood tables galore. I feel like Reece and Frankie have done a lot for the 40k community, and between the beautiful armies, brilliant strategic minds, painting seminars, and nerd space the 2015 BAO is going to turn out to be one of the best events for any fan of the hobby to attend.

Some quick Pablo predictions and pips about the BAO

Questions? Comments? Critques? I want to hear about them in the comments below!