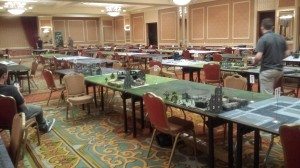 This past weekend, I made the trek to head out to Austin, Texas for Wargames Con. I had to part with some high value Walking Dead comics to pay for the flight over there, but was glad to make it to the land of BOLS to try my hand at another major GT. Coming into Austin, the weather was much more like Portland, Oregon than what I would think of Texas in summer. It had been raining for months and continued to rain during the convention. North westerners have a built in raincoat, so I was ready for what a little rain could throw at me.

We stayed and played at the Double Tree in Austin. It was a nice and spacious hotel that had an old world Alamo feel. I will say this about Texas, boy do they know their air conditioning! The AC in the hotel and venue was fabulous. Really helped against the heat and humidity of the weekend. The rooms were nice and worked out very well.

I decided to go with Necrons this time around for my Better than Ben (Dr. Insanatron) list. Myself and the French Overlord had discussed running the Decurion with a Wraithstar and how much more durable that would be. It is one of my better painted and converted armies, and the one that I won the Annihilation 2 with, so this powered up version should do fine. I’ve also been down in the dumps with my Centstar list (more on that later) and wanted something different.

The list is pretty simple. All characters go into the Wraiths. The unit has the Solar Staff to pop once per game and force snap shots. When they get Reanimation protocols, the Wraiths get to reroll saves of 1 per Orikan (as do the other models that have RP naturally). They also get Preferred Enemy with the Destroyer Lord, and the Overlord can pop the res orb for that turn where they truly need to make some extra RP saves. Everything else moves up to secure objectives and the Destroyers can deep strike if needed. It gives a lot of flexibility in setup and play depending upon whom I face. So far it has worked rather well as it can threaten both troops and mech with Gauss.

Jon runs Snarf Snarf (Zadsnark) with three units of bikes, 2 other Warbosses, a Big Mek, and Painboys to make the core. Then there are some Grots and Loots to round them out. What was funny is that we discovered we did the Frontline Necron podcast together! That was pretty cool to find out.

First turn I make a big mistake and forget to pop my solar staff, forgetting about bike shooting. He does two wounds to my DBag and kills two wraiths out of the star. His Orkstar is right in front so I feel I have no choice but to push forward and charge.

Surprisingly to both of us, the Wraiths and Co just won’t die as I’m making 3++ and RP’s like a champ. I tie up his Orkstar and Jon decides to line my table wall to auto kill my units coming in from reserve. I honestly didn’t mind as it took him three turns to kill one unit of Warriors and one unit of Immortals. That left my other units to go score Maelstrom. In the end I was up on Maelstrom and cleaned him out of his Emperor’s will for us to tie. Necron victory.

I met Mr. Goat at LVO and he is a rather great individual so I was super excited to play him. He brought two shooty Imperial Knights, 2 Iron Priests with cyberwolf wound caddies, a Wolf Battle Leader, and a unit of Ravenwing bikes with DA character support.

Big mistake here. I had a set of LOS blocking ruins that I could have put the Spyder in, but didn’t. This would have had the Wraiths RP right off the bat as I was going first. Combine that with the fact that now I couldn’t make a 3++ save at all and it was over rather quick. Had it ended on turn 5 I would have won Maelstrom as my piecemeal reserves allowed me to nab a lot of those, but it didn’t and I was pretty much tabled. I still had a great time as Goatboy is a lot of fun to play. Necron Loss! Shooty Knight are no joke! Check em out.

This round I faced Pepper’s 3 Stormraven list with Tacs and Dreadnoughts in them. Not being able to charge turn 1 out of the Stormravens really puts the hurt on that list. His first turn shooting was ineffectual against my star and I was able to whittle down the Tacs and Dreadnoughts as they disembarked. I had one huge turn with taking down both a Stormraven and Dreadnought that were threatening my deployment zone really sealing it. We called it near the end as Pepper couldn’t catch a break and my Star was pretty much untouched.  Necron victory!

So day one saw me 2-1 and having learned some valuable lessons. We had dinner and I watched InControl destroy a 3 ½ pound Lobster. It was glorious….if not a little sickening. 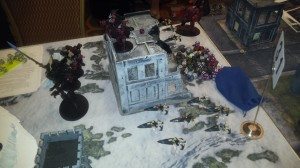 Round 4 saw me with a Hammer and Anvil deployment facing off against a nasty Eldar/Tau list. One of the worst. It helped that my opponent was a very nice guy, but man that list was intimidating. 2 Farseers, 5X3 Scatterbikes, Wraithknight, 2 Crimson Hunters and the Tau Firebase Cadre – Riptide and 2 Broadside units. Very intimidating list indeed, especially on Hammer and Anvil with no LOS in the middle of the table. Yay.

I just stuck to my game plan and did my best to capitalize on his mistakes. I pushed my Wraiths up the middle and popped the Solar Staff to limit shooting. I failed a charge turn two, but the impact was limited with the fact that he intercepted some Destroyers that deep struck into his deployment zone and only succeeded in killing two out of three Destroyers and keeping him from further shooting in my turn. I’d take that tradeoff any day. In seeing the resilience of the star, he pretty much tried to ignore it but this allowed me to take out Broadside, the Riptide, his Warlord, and a Scatterbike unit with it. It ended with my Dbag on an objective that survived giving me primary and all three secondary. He ended up with the Maelstrom. Super close game and I didn’t think I would have it. Necron Victory.

Last round and I had 7 drop pods coming in with Tacticals, Sternguard, a Dreadnaught, Cents with TIggy, and the Stormraven formation. Every. Drop. Pod. Hit. Their. Mark. I made a mistake in putting some stuff in a ruins that gave up first blood. I charged the Cents with the Star first turn but couldn’t get enough into it and the Cents tied me up for a few turns. We constantly traded Maelstrom and I had to focus on his ObSec units to get them off of their objectives. It ended with us tieing on Primary, tieing on Maelstrom, him with First Blood and Linebreaker and me with Linebreaker and Slay the Warlord. 2 Point tie! Hilarious and really a great game.

So with that I came in like 16th out of 72. Not too bad. It was a good weekend and I got to hang out with friends, eat good food, and hang out with friends. I worked my tail off helping set up and take down and want to give a huge shout out to all that helped. All of FNP (Check out their YouTube batreps! Good stuff!) really pitched in so I wanted to give them a special plug for all their help with the terrain and mats.

We also used Warscore again for the Wargames Con Champs and the Team Tournament and it also performed very well. If you are running a small tournament and want something solid you might check it out. Hit me up if you need help. We ran into an issue when someone…rematched round 4 making some pairing issues, but it was easily worked out.

Thoughts on the Tournament Scene

So one reason I didn’t take my Cents was that I know that there are so many more bad matchups out there. Funny thing is I didn’t really face any of them. The worst would have been the drop pods at the last game, but it is interesting in that when building a list now you can’t necessarily plan against every option, especially in today’s landscape of new codexes every week. The combos out there are crazy and will continue to be so. 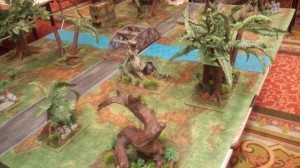 I also know that while I dream of being on that podium, I doubt it will happen. The “A” in Captain A isn’t necessarily for America, but rather Average or at best Above Average. I know I am not the caliber of player like what was there in that top four, but rather am like most 40k players out there. Not terrible, but not a tactical genius either. I need to focus on what makes the tournament fun for me, setting goals and trying to achieve them. I set a goal of 3-2 and beat that, so I know I need to get back to my roots and overall goal of Grey Knights champion. I have some ideas in the works, and I’ll get back to you.

So In the end I played 5 very nice people, ate, drank, and had myself a good time. Wargames Con is done and I had a great weekend. Thanks for reading!