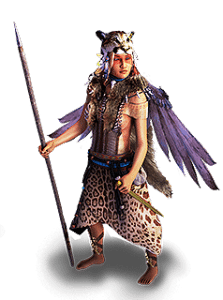 LYMM, CHESHIRE, UK, MONDAY JUNE 8TH 2015: A new character for the million-unit selling Talisman PC and mobile game will be launched on June 10th thanks to a fantastic collaboration between Nomad Games and SpecialEffect, the charity which helps people with physical disabilities enjoy games.

The new Shaman character will be available as DLC from this week and is the result of a competition which Nomad Games launched earlier this year in conjunction with SpecialEffect. Fans of Talisman were invited to submit ideas for characters, with the winner voted by Nomad Games’ enthusiastic community.

US-based Graham Zaretsky was the winner of the fiercely-fought competition, with his ideas then brought to life by three artists and gamers supported by SpecialEffect, namely Amandeep Singh Heer, Ben Clark and Gareth Garratt. The three produced sketches and collages to develop the look and feel of The Shaman.

This week Zaretsky, plus Singh Heer, Clark and Garratt will see her brought to life in the game, with The Shaman available to download for £1.49, with revenue raised from the DLC going to SpecialEffect.

In addition, fans of the PC sku will be given the opportunity to choose what they pay for The Shaman character, with Nomad Games hopeful that its loyal community of Talisman fans will raise even more money for SpecialEffect.

“We’re delighted that The Shaman will finally be available for Talisman,” said Don Whiteford, MD of Nomad Games. “She’s a very special character, given that she’s been created jointly by the Talisman community and SpecialEffect.

“We are blown away by the work that SpecialEffect does to support people with disabilities to play games, and we’re honoured to lend our support to them in terms of raising awareness for this very special charity, but also to support them financially via sales of The Shaman.”

SpecialEffect’s Fund Raiser Nick Streeter added: “We can’t thank everyone at Nomad enough for this brilliantly original way of supporting our work, and for their team to involve some of the people we help in the design process was a magnificent gesture.

“All the staff at SpecialEffect are immensely excited about the launch of the Shaman, and the money raised will go straight into helping more people, whatever their physical disability, to benefit from the magic of video games.”

Graham Zaretsky, who won the competition earlier this year, offered: “I’m deeply honoured that The Shaman was selected to help raise money for SpecialEffect. I love the artwork and that it is exactly in the spirit of the character that I imagined. I hope that it helps raise a lot of money and awareness for the charity.” 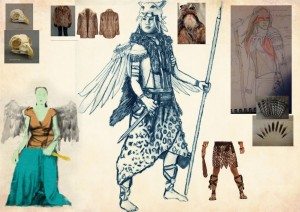 Talisman, the magical quest game from Games Workshop, is a classic board game that has been enjoyed by fantasy fans for nearly 30 years. As one of many characters, including warriors, rogues and magicians, the player embarks on a perilous adventure to find and claim the Crown of Command – a magical artifact with the power to destroy any rival and make the bearer the ruler of the kingdom. It’s a game of skillful decision-making based on dice and cards. Nomad Games brought the multiplayer version of the top-selling Games Workshop board game to PC, tablets and mobile devices last year, with the brand selling over one million units to date.

The Shaman is a new character for Talisman. She is a mysterious figure, at one with nature, who can use her link with natural forces to draw power from the wildlife throughout the land. The raw power of a Bear, the wisdom of an Owl and the incredible speed of a Cheetah are all at her disposal.

Nomad Games is an independent video games developer based in Lymm, Cheshire. The company was founded in 2011 by five games industry veterans with a track record spanning 20 years – right back to the launch of the original Sony PlayStation.

SpecialEffect is putting fun and inclusion back into the lives of people with physical disabilities by helping them to play video games. By using technology ranging from modified games controllers through to eye-control, they’re finding a way for people to play to the very best of their abilities. But they’re not just doing it for fun. By leveling the playing field, they’re bringing families and friends together and having a profoundly positive impact on inclusion, confidence and rehabilitation.

Games Workshop® Group PLC (LSE:GAW.L) is based in Nottingham, UK. Games Workshop designs, manufactures, retails, and distributes its range of Warhammer® and Warhammer® 40,000® games, miniature soldiers, novels and model kits through more than 400 of its own Hobby centres, the Internet and independent retail channels in more than 50 countries worldwide. Further details on the company can be obtained at www.games-workshop.com