Having covered all the new units in the Eldar codex, we turn now to the other major change in the codex – a massive assortment of formations and detachments that definitely bring something new to the table, and are solid enough to tempt you away from Ye Olde Objective Secured CAD-based armies. Check out the Tactics Corner for more great reviews.

For those of you just joining, this review has covered fluff & aesthetics, HQs, troops, the Wave Serpent, Aspect Warriors, grav tanks & sundry odds-and-ends, and finally the ghost troops and the Avatar. So what are the new formations – and what will they do for your army?

The Craftworld Warhost. Similar to the new Necron Decurion detachment, this is a fairly complex collection of inter-locking formations from which you can build an Eldar army, each of which has a bonus – and has a bonus when taken together in the Warhost. Building from these allows you to construct a Battle Forged army. It’s best to consult the codex for a full map of your options, but I’ll try to cover them here. Units in this detachment run at a fixed 6″ instead of d6, which is staggeringly speedy. 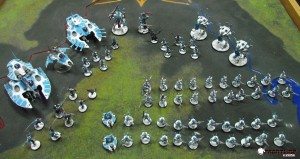 The warhost requires between one and three Guardian hosts, each of which is a formation in it’s own right, each discussed below, which will make up a lot of the core themes of your army:

Guardian Battlehost. The classic “mass of Guardians” army, portions of which may or may not end up being mounted in Wave Serpents, this formation consists of one Farseer, three units of Guardian Defenders, 1 Vyper squadron, 1 Warwalker squadron, 1 Vaul’s Wrath Support Battery and up to one Warlock Conclave. The mandatory “accessory” units is why the efficacy of those units are so important – it determines whether they’re an asset, or a tax. The formation also includes two special rules, which allow the Guardian Defenders from this formation to take their heavy weapons platforms for free. This is a nice bonus – and a great way to slip in multi-function Eldar Missile Launcher platforms into the army, immune to their overly high cost. Additionally, the Vypers, Warwalkers and Support Batteries gain Preferred Enemy when shooting at a unit within 12″ of the Guardians. That’s both a nasty surprise to anyone who stays close to a gunline of Guardians, or potentially a way to project force outward, using Wave Serpent mounted Guardians to coordinate their longer ranged support units.

Windrider Host. This is the one I expect to see the most of, both because it’s a relatively trim formation, and because as previously mentioned, jetbikes got very, very good. Made up of one Farseer and one Warlock Conclave, both of which must be mounted on bikes, along with three units of Windriders and a squadron of Vypers. As I said, this is all relatively compact, and clearly in “theme”, though it does essentially mandate a Warlock bodyguard for the Farseer. The formation only gets one special rule, but it’s a pretty solid one, giving Shuriken weapons Shred once per game at the start of an Eldar shooting phase. This puts some interesting questions on whether to arm your bikes with scatter lasers or shuriken cannons, as both Shred and Blade Storm can potentially make the fewer shots from the cannons considerably deadlier against infantry. How much more is a topic I may explore in a later post.

Guardian Stormhost. The same as the Guardian Battlehost, but with Storm Guardians instead of Guardian Defenders. Given how rarely one sees Storm Guardians, I expect this to be the rarest of the three “core” detachments. Like the other detachment, the various support craft get Preferred Enemy within 12″ of a Storm Guardian squad. Additionally, Storm Guardians can take their special weapon options – be they flamers, fusion guns or power swords – for free, making it more affordable to pack those squads with special weapons. If you are running an assault-oriented army that’s running across the field, Storm Guardians in this formation may be useful as screening troops, some assault weapons to help support the mostly melee-specific aspect troops, and a means to make long-range support units nastier as your assault force closes.

Regents of the Warhost (0 to 3 per Guardian Host)

Unlocked by the Guardian Hosts, these units are HQ heavy selections. Only one of them is a formation:

Seer Council. Made up of two Farseers (one of which may be Eldrad) and a Warlock Conclave, which must be as a single unit. All the units may be given jetbikes as well. This unit is a psychic power casting machine, harnessing the warp on a 3+ instead of a 4+. Additionally, it allows a re-roll of the Eldar Warlord Traits if selected as your primary detachment. Combined with the rerolls allowed by the Farseers, it’s a serious power in the psychic phase, and potentially fairly durable, though extremely high value.

The other two selections, Heroes of the Craftworld and Living Legends simply allows taking an Autarch-like character (Autarch, Yriel, Eldrad or Illic) or a Phoenix Lord/Avatar respectively. 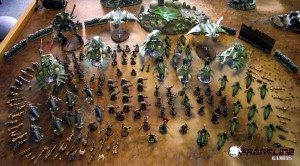 Auxiliary Units (1 to 12 per Guardian Host)

Many of these formations don’t have much behind them, save that they’re components of the detachment. For example, Outcasts allows a unit of Rangers, Engines of Vaul a squadron of Falcons, Fire Prisms or Night Spinners, or Wraithconstructs a Hemlock Fighter, Wraithlord or Wraithknight. There are however several that are more complex than that, and deserve closer examination:

Aspect Host. Made up of three units of Aspect Warriors (save for Crimson Hunters) with Exarchs, units in this formation re-roll Morale, Pinning and Fear tests, making them much less likely to break and run or otherwise slow in their assault, and before determining warlord traits can choose either Weapon Skill or Ballistic Skill. Every unit in this formation adds one to that characteristic. Keep in mind that this does not change between units, so if you’re going with Weapon Skill, it’ll be wasted on Dark Reapers or Swooping Hawks, while Ballistic Skill won’t exactly be valued heavily by Howling Banshees, so it’s a good idea to concentrate the units in this formation on a single role.

Dire Avenger Shrine. Made up of three units of Dire Avengers, one of which has an Exarch, this unit is essentially a specialized version of the Aspect Host. Re-rolling the same leadership based checks, and with their +1 set to Ballistic Skill. In exchange for giving up some flexibility from the Aspect Host, the triple Dire Avenger combination can, once per game, in a shooting base, switch their guns from Assault 2 to Assault 3. Sadly, you can’t use this to boost Overwatch even more, as it’s restricted to the shooting phase, but potentially makes that “Shock and Awe” Wave Serpent based close-but-not-assault build I have been musing about horrifyingly good.

Crimson Death. I love fliers. I love the concept of them, I’ve always loved them in 40K, and playing a Eldar Corsair army, it seems fitting to have a great many of them. This formation makes that possible. The formation is made up of three Crimson Hunters, one of them an Exarch – and given the sheer amount of your army then in reserves, informally I’d consider an Autarch a necessary unit tax as well to make sure they come in on time. In exchange for all this, you get some rules that will make you rule the skies. Each Crimson Hunter gets Preferred Enemy against both fliers and flying monstrous creatures in addition to its usual bonus to penetration rolls, and are also aided in terms of survivability. The formation has a native 4+ cover save without Jinking, and if they choose to Jink, this becomes re-rollable.

There are some questions I have about this – for example, if you get shot with something that ignores Jink saves, does it just lose the re-roll but not the native 4+ cover? I feel like this is the answer, and while units that ignore Jink (vs. all cover) are rare, Wave Serpent spam has made them prevalent on the tournament circuit. Being able to take those saves all the time – and thus fire at full BS – or a re-rollable save is a huge thing for the survivability of a set of fighters that embody the concept of “Glass Cannon”, though it’s also a hefty investment. I generally run two Crimson Hunters, and for small games that already feels like a lot of units off the board. But for larger games, I’d be tempted.

Wraith Host. Made up of three units of Wraithguard and/or Wraithblades, a Wraithlord and a Wraithknight – along with an attendant Spiritseer. This gives the whole unit Battle Focus, whether or not they’re near the Spiritseer, and as a bonus to sticking close to the psychic minder, they can re-roll failed To Hit rolls against units within 18″ of the Spiritseer. Definitely nice, though you need to get your Spiritseer in close, so make sure they’re protected, probably by wrapping them in one of the Wraithguard units. Whether or not the rules are worth it, building an army out of a collection of these formations is probably the best way to built the old Iyanden-style lists, though it’s not as flexible as simply having Wraithguard and Wraithblades as troops.

So there we have it – a vast host of formations, and a detachment to tie them all together. I will say that these have caused a bit of a crisis in my own thinking as I try to decide whether or not to switch away from a CAD-based army. There are definitely some really tempting rules here, though at the expense of a fair amount of flexibility. But good god some of these are tempting, and a guaranteed 6″ run means a huge amount of mobility.

For me the +1 BS on Dire Avengers, Warp Spiders, and Dark Reapers are where things start to get seriously spicy, mainly because each of these units fires two shots each, when you’re hitting on 2’s, the math is just staggering as to there efficiency.

Since you are going over the rules unaltered I find it odd how you completely glanced over the fact aux formations let you take up to 12 wraithknights circumventing the usual limit to one lord of war and spamming one of the most survivable and underpriced units in the codex.
I realize nearly everyone restricts lord of wars for this reason but that is the rules as written.