Adding Some Spice To Your Tournament

You are here: Home › 40K › Editorial › Adding Some Spice To Your Tournament

Every tournament organizer wants their tournament to succeed, so how do you take your event from a small sub 16 person event to a larger sized grand tournament? You might want to find some ways to add some spice to your event to take it up a notch and reach more players.

A lot of this comes through the lens of running events in the Portland, OR area and the Guardian Cup in particular – The Guardian Cup! Portland’s premiere 40k singles tournament held and hosted by Guardian Games, 8,000 square feet of gaming goodness – and this article is not necessarily by no means a commercial for the Guardian Cup because we are fully booked! Pretty stoked and I look forward in seeing everyone up in a few weeks for 5 rounds of epic 40k gaming!

To grow your tournament, you will want to make an appeal to a broader range of gamer. The amount of purely tournament players in your area might actually be pretty small. Finding ways to make your event appeal to a broader base of players will bring in more players and show them that tournaments are not filled with boogeyman WAAC players but typically regular guys just trying to have a good time and win some games. Here are some ideas to help bring in playes to your event by adding just a bit more spice to your event.

The price of an event can be a big prohibiter in getting players out. Unless your event has a big name attached to it and you know it is just going to sell out, then think about keeping it cheap. That is one of the things we have really tried to do with the Guardian Cup. $40 for a two day GT is quite inexpensive compared to most GT’s I’ve seen, which charge upwards of $80. Keeping it cheap is a great way to get players to your event. You might find that a cheaper event will help players focus more on playing their game instead of getting back their money at the event. 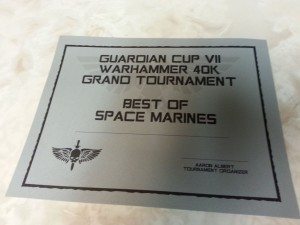 “Best Of” awards are certificates, trophies, or something similar for the player that does the best in their faction. This gives a lot of players a chance to play for something other than best general or best overall. Players may even take a sup par faction, known for not having the strongest units, just to have a chance at that prize. This can help broaden your army list base and hopefully you will see a lot of different armies at your tournament, which is great to see and makes it a much more enjoyable event for everyone.

This is something that I didn’t start with the Guardian Cup, as I believe the French Overlord instated it at a pervious Cup event. The idea is to have a list of things that might happen in games, the crazier the better. Things like killing your psyker with perils, having a challenge go 4 or more rounds, or having a unit regroup within 7” of the board edge. It can also be things that you choose like allowing a player to perform an action they forgot in a previous phase, or sticking with a warlord trait that you cannot use. However you go about it, giving players something to do during the game, especially for those players not in the top tables, allows them to stay in it and have something to play for. We have a special, “I Achieved This” trophy that I build and is pure epic.

A lot of people like to be social, drink, and enjoy themselves at tournaments and beer and drinks can certainly help with that. We are lucky in that The Guardian Cup is held in their bar area called The Critical Sip and has a bevy of spirits to quench the thirst of any gamer. You can also do this by hosting your event at a place that has a bar such as Just A Games Con which was held in an Elks lodge or TSHFT which had a bar through the hotel space. Just be careful that the players are not imbibing too much and get carried away in other areas.

Prizes can be a big motivator for players to come to an event. Be it big gift certificates for the winners, cash, or raffle prizes, giving players a chance to recoup their money in some way can really motivate them to play. Be careful though that the top prizes don’t bring out the worst in players. Keep an eye on those top tables for any shenanigans that might put a blight on your event. One way is to use the entry fee to help buy product or gift certificates, but you might start reaching out to gaming companies or local game stores to help support your event. Free product that goes to the players is great advertisement for them and helps you add some flavor.

The world of 40k is a funny place. We have our own internet celebrities with players that are known for being solid competitors. Reach out to them through forums, podcasts, email, and word of mouth to get them to your tournament. Reaching out to other gaming groups can bring in more than one as these groups can carpool and cut down on costs, making it more viable for them to attend. It has been cool to see just how many players are coming to the Cup from out of town from all over the west coast. We will have players from San Diego to Canada, which is awesome to see.

Another way to add some spice is to use trophies instead of cash prizes for the top placers. This gives players something to play for, but removes the additional pressure of big cash rewards to keep the hyper competition out of it. Players love trophies as they are a great thing to take home and show off to friends and family. They are also quite reasonable in price and can be very cheap making it a win win for player and tournament organizer.

So there you have it! Some ideas for every tournament organizer to add some extra spice to your event. These things can really help make your event special for your players and will bring them back again and again.

What about you? What things have you seen at events in your area that are good ideas in appealing to more players? Post in the comments below!

← Bay Area Open 2015 Tickets are up for sale!
Thunderdome this Season? →

4 Responses to “Adding Some Spice To Your Tournament”