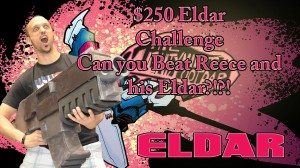 Reecius thinks Eldar are too powerful, and is willing to put $250 of his own money on the table to back that up! You think he’s wrong and that you can topple his Eldar, and take his money? Then pick up the gauntlet and prove him wrong!

Hey everyone, Reecius here with a fun challenge: come and beat me in a live game of 40k on our Twitch Channel and earn yourself $250, cash money! I think the new Eldar are brutal and am left sort of scratching my head about it, but, I want to be wrong! Can the Scat Packs (Eldar Jet Bikes with Scatter Lasers) and the Dirty D slangers be taken down? Are Apoc Blast, Fleshbane, AP3, Haywire psychic powers that are easy to cast a tad much? Seer Council getting me down? Help me turn my Eldar frown, upside down!

We typically broadcast live games every Tuesday and Thursday night on out Twitch Channel, FrontlineGaming_TV, as well as our live show, Signals from the Frontline, on Mondays and Fridays. But, this Eldar-palooza warrants some serious attention! We’ll be live casting tonight, Wednesday starting at 7pm PST and may be able to squeeze in a double header as we have two challengers tonight, Jon Bunn–former Head TO for Feast of Blades, and James Carmona–#5 ranked in the ITC–and his Chaos army! We’ve also got multiple GT winner, Douglas Johnson bringing his Censtar and Termiestar list to challenge later in the week, too!

So come on out, have a fun game with Eldar and see if you can punch Reecius in the dingus and take his moolah! If you want to join in on the fun, tune in to Twitch and have fun with it! Caveat: we normally only play with painted models on our Live Stream, but, with this Eldar release, we didn’t have many of the new models so we have been using some unpainted models and occasional proxies. We have the missing models en route from GW, just need to get them assembled. Sorry for that, but not much we could do about it.

Also, be sure to catch our 25% off sale on the Assassinorium Execution Force game while it lasts!

← Malifaux’s Most Wanted Episode 14: The Makeupisode‏
Signals From the Frontline Videocast Episode #335 & #336 →