The tournament season can be an adventurous one, full of ups and downs. For those uninitiated to a tournament season, it can be a downer for sure. I know for me, at the beginning of the ITC season, I didn’t do too well. It took some time, practice, help from others, and a good list to get me back into things.

I’ll be blunt, I don’t think this article is for the seasoned players that can switch seamlessly from army to army, playing one army at one event and then swapping over to a completely different army at another event. This article is for the rest of us, the average joes, the weekend warriors, the 40kers looking for something to edge us forward just a bit to give us a shot at the higher echelons of tournament play.

When it comes to playing in tournaments, one thing every player will need is a strong list. Where this list comes from can be from many sources. It can be of your own design and function where you found a great combo you like. It could also be an internet list that caught your eye (and I do not thing this is a bad thing for many average players of which I would apply to myself). It could also be bashed together by other friends near and far that help you craft a powerful combo. Or it could be limited to some extent by the fluff you have read or the models you own. Once you have a list in mind, the main thing to do is test it out.

I personally feel that one of the best things a person can do to “up” their game is to play their list over and over to death. Not necessarily at a tournament mind you, but before a tournament play as many games as you can against all manner of opponents and lists. In my mind this does many things to help a gamer.

You Know You Wanna Tweak It 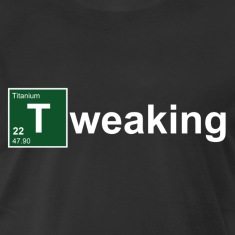 Once you have a list in mind and have started playing it the tweaking begins. Unfortunately I feel a lot of players go too far with this and start from scratch or go to a completely new faction or other new hot unit, leaving everything they crafted behind.  I really feel it is wise to keep the core of the list intact, especially if you know it is good and strong. Focus on what will make the core better or the list stronger overall instead of throwing everything out and starting over. This puts you further and further behind the curve of others that hone their blades instead of chucking it and grabbing a spear and starting to learn the art of war all over again.

I did this with my Necrons when Ward’s book came out. I started with a core list and added bits here and there that didn’t change things drastically, but added power overall or made the units synergize well. I really did this with my Centurionstar list though.

In conceiving of my Centurionstar list I read and watched everything I could about other similar lists. I had the core of it done with three Centurions, Draigo, GK librarian, and two Dreadknights. I tried all kinds of other support units with Tigirius mostly, Tactical squads in Drop Pods, Thunderfire support, Storm Talons, Scouts, GK Terminators, all kinds of things. I did pretty well with it, but continued to try to perfect it and make it better.

All of these tweaks I playtested time and time again and saw that worked well and what didn’t. I didn’t throw the whole thing out and go to a different army when I lost, I learned from my mistakes and took out what under-performed for me and tried something I thought would be better. I also talked to other strong players to get their insight as well.

Adding Loth was a key component for me, as well as the fourth Centurion. This made the Star more killy and more survivable. It didn’t change what the star did, just how well it did. The other key components came down to mandatory troops and support units.

I vacillated a lot on Terminators or Strike Squads for troops. I love my Termies, but man they seemed to fold up like a paper doll every time I used them. I also went heavy Space Marines with more core troops there, but really felt it when my Dreadknights started dying. I ended up with going CAD Grey Knights to get some obsec and get the third Dreadknight, as well as getting units that boosted my warp pool. I could see adding more scouts and Land Speeder Storms as has been suggested, but that takes away killing power from either the Star or the Dreadknights, and I haven’t felt the lack of obsec much in most games.

How and Where of Tweaking

For me, I think my biggest asset in tweaking was in the players around me. I sought help from very strong players like Dr. Insanatron or The French Overlord and got good advice in taking my list to the next level, seeking to hone it further and further. It is not perfect, but it has performed well and I have enjoyed playing it. It is far and beyond from a point and click list as some think it is and have enjoyed the complexity of how it needs to work in each phase to survive and thrive…at killing!

If you don’t have some hardcore solid players in your area, take it to the net! There are a lot of great forums and places to ask for advice. Our own Frontline forum is a great place to seek advice on your lists and discuss tactics, but there are tons of great forums and even bloggers and podcasters that will take your list and give you advice.

I guess for me, the thing that makes me sad is when I see a player start on an army, lose, and get frustrated that things didn’t work out, then either quit playing or jump to another army and start the process over again. 40k can have a steep learning curve so the more you play your list, the better you will do with it and the more you will know what it can do to others you play. Don’t be afraid to change things, but be careful about throwing everything out. Especially if you have a unit or core force that you know is good and works well.

So to sum it up or too long didn’t read:

You may not win the next tournament, but I bet you will become a better player with your list and feel more confident in the long run. Get tweaking!

This is a great article! I know some people (sometimes myself included) really need an upper and encouragement when trying out what they feel will be fun, and doing well at the same time. Sometimes it’s the list balance. Sometimes it’s the player mind set. In a game as complex and diverse as 40k it can be hard to tell what exactly the source of a problem is. The best answer, as you laid out so well, is practice and sticking with it. Nothing grows wisdom like hands on experience, and it’s good to see someone who has posting access to a high traffic area of this hobby really believes in that. I hope this gets around because a’lot of great people really need it.

Thanks. Glad u liked it.