I’ve been a big fleet game fan for as long as I can remember. However they tend to vary between overly simplistic rulesets, and “I can’t believe this isn’t spreadsheet manager 2015”. When Battlefleet Gothic (BFG) launched, I felt like it really bottled lightning, in terms of trading off complexity and ease of play. The ruleset forced you to consider inertia and your future moves. The orders meant that you had to take a risk in setting something up, and couldn’t rely on it to 100% work. There have been a number of “successor” games over the years, but I’ve personally found that the mechanics didn’t capture the right balance that I enjoy. This year is a big year for fleet-based gamers. In PC land, Homeworld: Remastered launched, and we have three potential top tier Fleet games for tabletop: Star Wars: Armada, Hawk + Andy Chambers’ “Dropfleet Commander” (WIP name), and Spartan’s Fleet Based “Halo” game. All three are looking amazing, and it’s going to be fascinating to see how it all pans out.

Let’s start with the starter set. In true FFG form, it contains a set of three pre-painted starter ships, along with a set of fighters for both factions. You get a Victory Class Star Destroyer, a Nebulon-B frigate, and a CR-90 Corvette. The paint jobs on the ships I received was high quality, and very impressive, but three medium sized ships don’t give you a heap of tactical options, especially for the Empire. The Empire forces are reinforced with six TIE fighter squadrons while the Rebel Alliance can call on four squadrons of X-Wings. 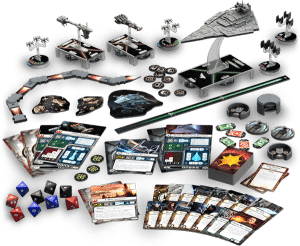 It will take two reasonably coordinated Star Wars nerds about half an hour to assemble the stands, shield tokens, order counters, etc. There’s quite a few pieces to punch out, and you need to be a little careful, I imagine it would be easy to damage the fighters in particular trying to get them to fit into the snug flight stand sockets.

It looks like the game has an incredibly variable street price. Here in Australia, it retails for up to $170 (about $130 USD) but it can be had from the US for $65 USD, including shipping. It seems like FFG has their hands full producing game pieces, because many stores have a lack of the core game, and the wave 1 releases which have been on the FFG store for a long time, aren’t available at the time of writing. At $130, it seems exorbitant, and the expected street price here in Australia for add-on ships has some of the wave 1 releases at $50 AUD. While the models are pricey, they are completely ready to play, and come with decks of upgrades, markers etc for their use. While pricey in my opinion, the upgrade models do come with everything you need to use them, including upgrade cards.

So, shut up and tell me how the game plays, right?

In some ways, it’s incredibly elegant. You can boost your ships powers by giving each capital ship an order each turn, however the “bigger” your ship, the longer your queue of orders. When you give the corvette an order, it’s executed instantly, the Nebulon B has to wait a turn (each order was issued the turn before), while the Victory Star Destroyer has to wait two turns before it’s orders execute. Orders allow a ship to adjust it’s speed which in turn effects how rapidly it can turn, they allow a ship to “repair” which could mean refreshing a shield, or on a large ship, removing a damage card. Orders can also boost a number of fighters massively depending on the fighter capacity of the capital ship. Fighters act in both player’s turns (much like assault in 40k), but can only move or fire each turn unless boosted. Lastly, you can increase the firepower of your ship, via the final order. If you give an order that no longer applies (you predict you’ll have damage to repair, but none comes your way, for instance) you can store the order as a “token”, which gives you a less powerful version of the order’s buff, for use at any time later on.

Mechanically, combat is similar to X-wing. You roll a number of varying coloured dice (each of which have a different range, too) which provide either nothing, a critical hit, a super accurate shot or a quantity of damage (or in some cases, a combination such as a crit, plus a regular damage point). Capital ships, and named fighters have defensive tokens, which can be used once-off to avoid or mitigate damage. If a token is used twice in one turn, it’s permanently burned, otherwise it’s a resource that renews each turn. This is a fantastic mechanic, it allows you to trade damage you are taking now, at the cost of reduced longevity if the fight persists. Blowing all your defense tokens makes you super-powerful early on, but will make you completely defenceless later on. While if you go too sparingly on the tokens and don’t expend any permanently, they might be wasted if your ship takes so much damage that it succumbs to early alpha strikes.

If there’s a weakness and a strength to this set, it’s the fighters. On the one hand, they are a finite resource, far removed from the abstract tokens of BFG. But when you actually get down to it, carriers are relevant only for the buffs they bestow. There’s no requirement to actually launch fighters, they start the game on the field. This is a real sore point for me, because it would have been a perfect way to attempt to balance the Imperial and Rebel forces with contrasting focuses. The rebel fighters are (all?) capable of travelling through hyperspace, while the bulk of Imperial fighters (and certainly the TIEs in the starter set) are incapable of such travel. Starting with the rebel fleet fully deployed, and the Imperial fleet having to launch it’s fighter wings, but having much greater reserves would have been a great contrasting factor, and helped force the Rebels to entangle the Imperials early if possible.

The biggest gripe I have with SW:A, is the measuring/manoeuvring tool. While I can see the value of the tool, I’m skeptical of it’s longevity, and would have preferred a system closer to X-wing’s. Hopefully we see some fantastic replacements from third-party suppliers. I do think though, that the manoeuvre tool represents a failure of game design, they’ve attempted to incorporate too much detail in the speed vs turning equation for my liking, and the result is the necessity of a clunky, bespoke, gaming aid. Whether that’s through over-ambitious game design, or an attempt to eek out more profit, remains to be seen.

If you want realistic space manoeuvres, maybe we should just admit that we need a game system that uses vector math? That or we could just go for a simple abstraction? I’m not sure which solution this is closer to.

If you can get your hands on the starter kit for a brilliant price, then it’s an auto-buy in my opinion (perhaps even pick up two sets, to bulk our your forces). The pre-painted miniatures are brilliant, the fighter miniatures are perfectly serviceable (but unpainted), and the mechanics overall reward forward-thinking, and experimentation. The rule complexity is a bit much for a casual gamer, the extra quirky rules that separate this from the simplicity of X-Wing mean that it’s better enjoyed by those prepared to put some time in to learning it.

This game is also (reasonably) available now, while Halo and Dropfleet remain future projects, which realistically won’t ship for a long time. If you are interested in either of these alternative games, stay tuned for GenCon for announcements, but don’t let that put you off dabbling at least with SW:A. I’ll be especially interested to see if community house-rules spring up, the rule set, with some house-rule tweaks could be fantastic.