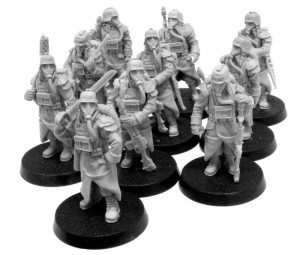 Hey everyone, Reecius here for part 3 of our Death Korps review! This time: Troops and Fast Attack. As always, check out the Tactics Corner for more great articles.

The Death Korps are a really cool way to play Astra Militarum. They have some punishing firepower as we’ve seen in the Elites section, with excellent morale control. However, they do lack AA. But, let’s see what the backbone of the army consists of: the Troops! 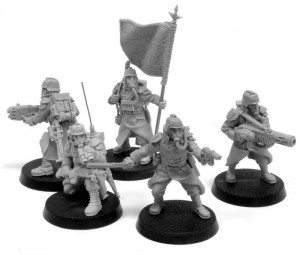 These are really similar to the standard issue Astra Militarum platoons, apart from the army wide Death Korps changes to their morale and WS (Iron Discipline and Death Korps special rules, covered in part 1 of the series), the fact that they all come stock with Krak Grenades, and cannot combine into larger squads. Not being able to blob would normally be pretty limiting, but, with their morale control they are pretty solid as MSU squads. Plus, with WS4 and Krak Grenades, they can actually be a viable threat to a wide range of targets in melee. Now, they do cost more than normal AM troopers for these bonuses, but that is to be expected. Interesting to note also, they pay lower points for melee weapons than standard AM (10pts for a power weapons, 15pts for a fist) which is nice. Interestingly, they cannot take heavy weapons in their PCS or Infantry Squads, which is odd.

Their Heavy Weapons Squads would actually be really appealing due to their morale control, if it were not for the fact that so many things in the game are strength 6 and ignore cover. Le sigh, Heavy Weapons teams look so cool but are just so bad in the game, at present.

On the whole though, not being able to blob up, not having access to heavy weapons and their increased points cost is a bit of a turn off. You can take an Infantry Squad with say, a Flamer and a Power Axe or Melta Bombs on sarge for a reasonable price point and have a reliable squad to go after objectives that is actually not terrible in melee against soft targets. 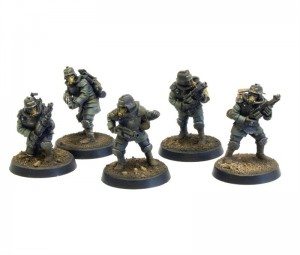 This is the unit you are going to be seeing in the vast majority of lists in the troops slot. This is a flexible, cheap, solid unit with some outstanding upgrades. The Combat Engineers are the Veteran equivalent of Astra Militarum. However, they have several key differences. For one, they are more expensive, but come stock with a 4+, all the cool Death Korps rules, a Shotgun, Frag, Krak and Acid Bombs! Acid Bombs are a special type of shooting attack with the following stats: 8″, Poison 4+, AP6, Assault 1, Ignores Cover, Blast 3″‘. Cool. TheEngineers are also BS4, to boot.

They can take a special weapon or demo charge and form a heavy weapons team with a Heavy Flamer or Mole Launcher. 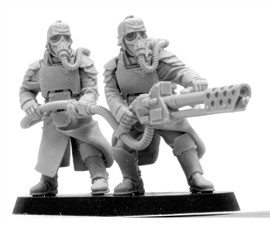 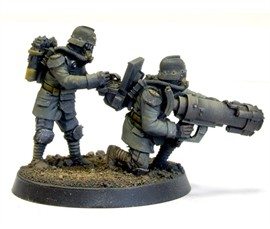 The Heavy Flamer requires no explanation or comment beyond that they are awesome. The Mole Launcher is Heavy 1, 24″, Str and AP5, Blast 3″, with Strikedown and a special rule that means they always hit the weakest armor facing of any vehicle they target. Pretty solid for a mere 15pts! Lastly, they can take the usual melee upgrades at lower prices on the power weapon and fist.

This is a really solid unit. A bit pricey, but, you get a lot. A troop that has good morale control, tons of options and can be made to sit on an objective and shoot with the Mole Launcher, or be aggressive and go up the field with Acid Bombs and grenades, a special weapon, Heavy Flamer and possible a melee weapon, too. They can be kept small and cheap, or beefed up to a larger size. They can also take a Centaur Carrier dedicated transport, which is a 40pt, Fast, Open Topped, 2HP, 11/10/10 vehicle with a 5 man capacity for zipping around the table, grabbing objectives and lining up good shots. 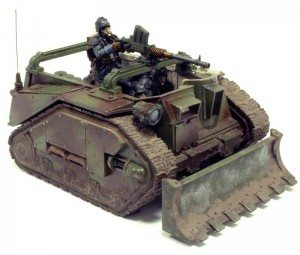 This little booger doesn’t look like much, but provides some really solid scoring options as it too, is ObSec when taken with the Engineers. It can also tow artillery units, which may come in handy, and is a cool little rule.

Engineers I think will largely be played one of 2 ways. Either min/maxed with a Mole Launcher to sit on an objective and shoot, ignoring most morale checks outside of melee and the psychic phase, or, with a special weapon and Heavy Flamer in a Centaur as a speedy ObSec unit that also has some teeth to it at a very reasonable price point. I dig this unit quite a bit.

However, the real magic is in their other dedicated transport, the Hades Breaching Drill! 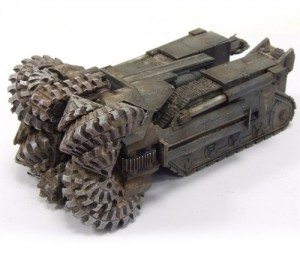 This thing is a beast! It is a lot different than the version available to Astra Militarum which is a vehicle. The Death Korps version is an infantry model that actually joins a unit of Engineers! Wowzers, it can hide in a unit! And, it packs a serious punch, too. First off, it’s T7, with 3 wounds and a 3+. Already a boss. It comes with MtC, and some crazy special rules. For one, it is permanently attached to its unit, it may not leave and if all the infantry are killed, it too is removed. The unit must always start in deep strike reserves as it comes tunneling out of the ground with its unit. The turn it arrives form Deep Strike, the entire unit has a 4++. Once on the table, the unit can opt to use the Tunneling special rule in the movement or assault phase, which has two effects. In the movement phase, it allows the unit to move 12,” ignoring terrain and models, but they most end more than 2″ away from enemy models. When using this method to move, they again get a 4++. Awesome for snaking objectives!

If used in the assault phase, they unit rolls an additional D6 on the charge roll, and takes the two lowest results. They also ignore overwatch when assaulting this way in addition to ignoring terrain effects while charging and they count as having grenades! Wow! But, here’s the best part: when assaulting this way, the Drill gets D6+2 HoW hits at Strength 8, AP1, Shred, Armorbane….holy crap! Slap yo gandma, that’s some power! You can drop an Imperial Knight, with ease, in one charge. Now granted, you are slow on the assault, but when it works you bring the heat. Remember, the HoW hits at I10, too. You can take down a LOT of troublesome units with the Drill and attending Engineers. Also, against Forts, every model inside gets hit with a Str4, Ap4 hit on a 4+. Lols. That is brutal.

Now, on the downside, doing this makes the unit an Elites choice, not troops. Boo! But, they have some detachments later that help with this, which we will get to. Also, the unit has to get pretty close to reliably get that critical assault, which is not easy to pull off in the game all the time. Third, the unit can and will get run down in melee if the Drill doesn’t do work (although it should). You do need Infantry with it, too, and while going a full 10 man unit is a good idea, you may not have to invest that many points. I’d run with a Heavy Flamer, Melta Bomb and Melta gun and go with between 7 and 10 models in the unit to help protect the drill and provide some powerful support weapons that still allow you to assault when fired.

This is, for me, the all star and most characterful unit in this book. It is risky to use, but hits like a brick shit house and looks cool, too. Win! Sticking an allied character in there such as a Space Marine Character, is not a bad idea. 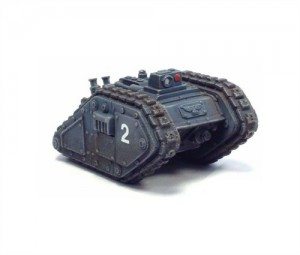 This is a fun, if not that amazing, little unit. It is comprised of 1-3 Cyclops teams. One of which is an Engineer that controls the Cyclops Demo vehicle. The Cyclops is essentially a remote controlled bomb! It blows up in the assault phase at I10, at Str9, AP3, Ordnance, large blast. Both models are Infantry, and operate independently. The Cyclops may move up to 48″ away from the Operator(s). So, basically you hide the Operators and run the little buggers at something you want blown up! It is T6, with 2W and a 4+, so it is reasonably durable, but slow. Note: it doesn’t auto-blow up, you choose to do it at the I10 step. So, if you want to risk it, you can wait a round of combat for models to pile in and get more of them! Or, you can opt to detonate in your assault phase, even if not in melee. This is a fun little unit, and will occasionally have a big moment, but probably not the most competitive choice. I can see them being great for just jamming up the field, forcing the enemy to deal with them as each Cyclops in the unit acts independently. Also, they don’t seem to have any rules stopping them from scoring objectives? Might be fun to use in that capacity! Since you have to kill the Operators to destroy the unit though, you don’t risk much by playing them aggressively. 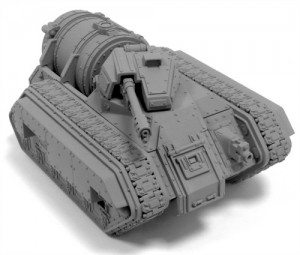 These are the same as you see in the Astra Militarum book with the addition of being able to take Mine Ploughs. They are a solid tank, but nothing special in the current meta. I wish they were better as I have 3! But, they are not bad, and with their variable armaments can find a place in most lists. 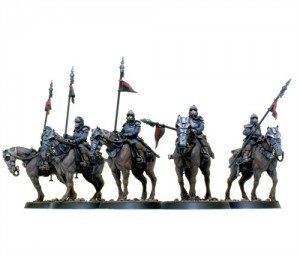 Yeah, booooy! I love this unit! It is just fun, and can be quite good, actually, if not outstanding. The unit is comprised of 0-1 Command Squadrons, and 1-6 Death Rider Squadrons. The basic Death Rider is a really solid value for their 15pts per model price tag. You get a WS4, 2 wound cavalry Guardsmen with 6+FnP, the Death Korps morale rules, and a reroll on failed Dangerous Terrain tests. Not bad! They also have a 4+ stock, base 2 attacks, a pistol, Frag and Krak grenades, and a hunting lance. The lance gives them strength 5, AP3, I5 attacks. Nice! The Ride Master (Sarge) can also take melta Bombs, or a Plasma Pistol or Power Weapon. This is a solid little unit that is reasonably durable (T3 is a killer, though), and hits pretty dang hard. The Command Squad version features an officer, the option for a Commissar, and a Demo Charge. With WS4, and Krak Grenades, possibly a special melee weapon or Melta Bombs on the sarge character, they can continue to contribute even after the first charge against soft targets.

On it’s own, you may not take this unit beyond it being just cool. However, one of the Detachments available to the Death Korps gives these fellas ObSec, and basically lets them function as troops. That is where the magic is! We’ll get to that, later. This unit though, is solid for the points and they just look awesome.

Next week, we wrap it all up!

We’ll cover Heavy Support, Lords of War, special Detachments and look at what I think would be some really nasty lists that would also capture the cool parts of the Death Korps. Stay tuned!

Part 2 in the series here.

Part 1 in the series here.