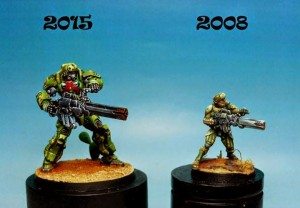 ITC is currently up to date! Thanks for the patience, everyone! Big, huge thanks to TinBane who helped automate the scoring process and to Garret and Aaron who are helping to automate the process of getting those scores onto FLG in a nice looking way. We now have a free TO score sheet for submitting ITC scores, which you can download from the ITC page or here in the notes!

-sorcerer also has divination from the balestar

-Kharn joins marines in the dreadclaw to drop where ever needed, keep kharn away from heavy challenges, leave that for T6 2+ armor nurgle lord

-marines replace bolters with close combat weapons for free and get rage so total 4 attacks on the charge each, kept unit cheap b/c they are going to die pretty quick

-Tzeentch herald will go for summoning a daemon prince, if not then whatever summoning he can get

Two big threats( nurgle lord unit and maulerfiend) that run across the board while the conversion beamer should kill a unit a turn.  Kharn and bloodletters drop in back field to force opponent to make choices on who to attack.

Four ob sec units but are slow and squishy

let me know what you guys think,

← I am so excited for the new Skitarii!
Necron CAD at the Ordo Annihilation Highlander Modified Maelstrom Event! →

13 Responses to “Signals from the Frontlines: Warhammer 40k and General Gaming News, Rumors, Tactics and Comedy!”