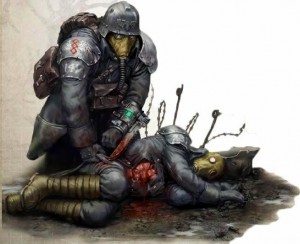 Hey everyone, Reecius here from Frontline Gaming to continue with the Death Korps of Krieg Siege Regiment review! You can read part 1 here. Be sure to check out the Tactics Corner for more great reviews.

Last week we did a general overview of the new Forge World list (which is legal for ITC format events!) and today we will dig into the HQ and Elites section of the book.

The HQ section is probably the weakest in the Death Korp list. It has units that are all pretty middling in effect. Not bad, not great, but useful. 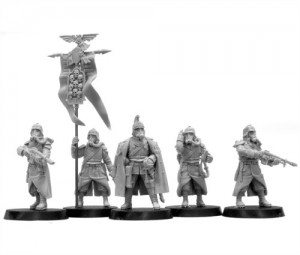 The first entry in the book is for the Command Squad. It is quite similar to the standard Astra Militarum Command Squad in that it is comprised of an Officer and 4 veterans. It also has similar upgrades such as Master of the Ordnance, Mast of the Fleet, Astropath, etc. The main difference comes in the unique Orders, Death Korps and Iron Discipline special rules covered last week, and the fact that the unit can take a Centaur transport, which is common in the Death Korps list. The Centaur is a Fast, open topped vehicle which can carry 5 Guardsmen. Beyond that, really not much to report. The unit is 100pts, so a bit pricey, and doesn’t really offer you that much utility outside of the orders which are not as good as standard Astra Militarum versions. The real benefit is keeping nearby Death Korps units in the fight by being able to rally on normal leadership down to a single model which if you stick them in the right list, can be pretty awesome. 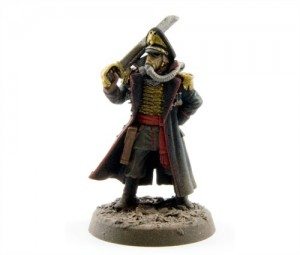 Not much to report, he is 5pts more than standard and has less options….cool. Still, he’s not bad, he’s just not great, either. In the context of a Death Korps list, I don’t think you’ll see him much outside of filling the HQ slot on the cheap. The Death Korps are so good at regulating their morale on their own, he doesn’t add as much as he would in a normal AM list, although he is great for helping avoid pen tests on units like artillery. And even with the inferior orders of the Death Korps, the CCS is still more appealing as the orders they do have are better than what the Commissar offers. 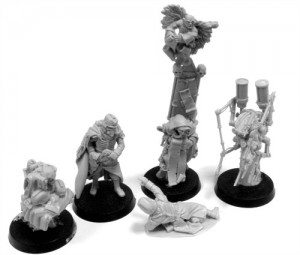 This is an interesting support HQ choice. The unit’s main benefit is that they provide a FnP 6+ bubble at 6″. However, with T3 models in a meta of masses Str6 and 7 shooting, this is of limited utility apart from the plethora of artillery units you can field who will certainly enjoy the boost. Beyond that, though, the unit doesn’t do much beyond filling the HQ slot on the cheap: 75pts.

The Elites section of the Death Korps list is solid, better than the standard AM Elites choices, IMO. 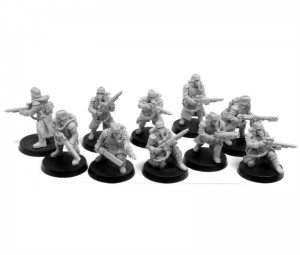 The Death Korps Grenadier Squad is the equivalent of Storm Troopers or Scions in the standard Astra Militarum list for all the positive and negative that that implies. The primary difference being that they do not have the option to Deep Strike, and come in units of 5 to 10 at 12ppm. However, if you do take this unit, I think Min/Maxing them in units of 5 with 2 Melta or Plasma, and a Heavy Flamer team with a Sarge, you have a fast little unit that hits pretty hard, too. Is it worth taking in a competitive list? Eh, perhaps. If you run an MSU list they certainly have a place as a versatile little unit that is speedy and can hunt heavy and light units with their mixed armament at a reasonable 130 points.

Say hello to your only AA! This unit is OK. It’s cheap, at 50ppm, and can only take units of 1, but, they do give you AA…on an immobile, AV10/10/10 2 HP model, haha! Basically this is an automated Quad Gun, and it is middling at best for AA on a platform that is easily destroyed for a KP or First Blood. If you want to go pure Death Korps then consider this unit but honestly, I’d rather just use twin linked weapons in the AA role over the Hydra Platform. Allies are really the best bet to cover the skies for Death Korps. 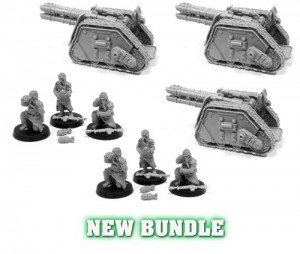 Now we’re talkin! This is where the Death Korps starts to shine: in their heavy weapons! Rapiers are twin linked, ordnance 36″ las cannons on an artillery model that also has the Death Korps special rules to keep them from running away. Awesome. At 45pts for 1, taken in units of up to 3 Rapiers with an additional crew member at 8pts a pop, up to one per gun, you have a great unit. Even with BS3, a battery of 3 will reliably put damage on heavy targets. At a very reasonable price point, this is a great unit. Again, if only they could get the Ignores Cover order, but what you get is excellent. 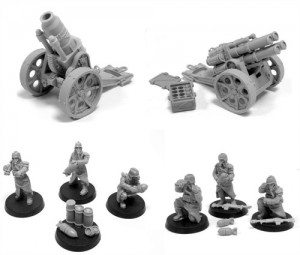 Another awesome unit! Especially in the Elite slot. 55pts per unit which includes either a Heavy Quad Launcher or Heavy Mortar and 3 crew. Both of these are excellent weapons. The Heavy Mortar is barrage, Strength 6, Ap4, large blast, 48″. The Heavy Quad Launcher is 60″, barrage, str5, ap5, heavy 4. Both are fantastic units as like the Rapiers, they are mounted on durable T7, 3+ artillery units, with ablative wounds in the crew plus the very solid Death Korps special rules to avoid running away. Most lists will be loaded with these and Rapiers in the ELites slot to provide cheap, powerful, durable shooting units.

And there you have the HQ and Elites! Next week we’ll dig into Troops, Fast and Heavy choices which have some awesome choices for the Death Korps player, particularly in the Troops slot!