The votes are in!

First of all, wow, we got a big response this year! Over 800 votes. It really shows how much the ITC is growing. It’s also a great way to get a good selection of the 40k tournament going population’s opinion on some issues that we face as a community. I always prefer to make educated decisions on things like this as opposed to just guessing or going with what I or the relatively small group of people I play with prefer to go with. It is very easy in 40k (or anything, really) to think that the opinion that is popular in your gaming group represents the global community which is often not the case.

So, without further ado, here are the poll results. I will be drafting the ITC guidelines for the 2015 season today, they will be up tonight along with Wargames Con tickets.

How many detachments do you want to see in the ITC for the 2015 season?

Well, this one was ultra close! It came down to just 7 votes, less than 1% of all the voters! However, in the end, the vote for keeping things as they are won out narrowly. 2 Detachments is the name of the game for this season as it was last season. I was actually really surprised how many people voted for a single Detachment, I didn’t think there’d be more than a handful of them. But, when we exclude it from the poll, I always get emails asking why it wasn’t an option so I put it back in. Turns out, quite a few people prefer to play 40k in “classic mode.” Also, I honestly didn’t expect 172 people to vote for unlimited Detachments as for me personally, I feel that that is too chaotic. But again, this goes to show that different gamers want different things.  Interestingly, if you add up all of the votes for 3 or more Detachments vs. 2 or less, you actually see that more players wanted more Detachments. However, with the polls, we go with whichever option won the most votes so in this case, 2 wins. Interesting as both Frankie and myself actually voted for 3 Detachments. 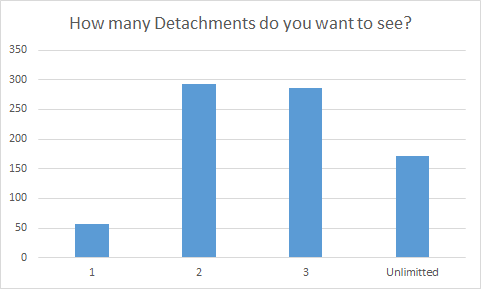 What types of restrictions would you like to see on Detachments?

I wasn’t too surprised with the results on this one, although I was hoping to see the vote go with only a single CAD style detachment. But, again, the community wants to go with the status quo. You can take only 1 of any type of Detachment, but no limit on “CAD Style” detachments (but no double CAD, in case that was confusing to anyone). 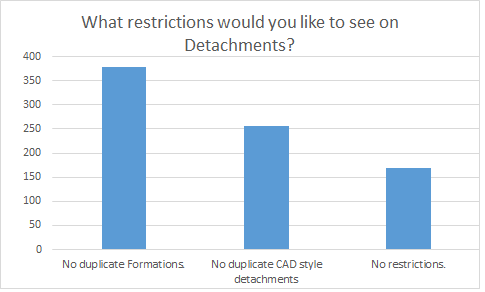 How would you like to see “Decurion style” Detachments handled?

I was very curious to see how this one went. Decurion style detachments look like they will be a part of every codex release going forward, and are essentially Detachments of Formations. As we limit the number of these available to players, I could see how folks would see this as unfair if the army they play doesn’t have access to a Decurion style Detachment. However, as you can see, the community wants them to be treated as a single Detachment for ITC restrictions. Please note though, that you are still limited to only 1 of any type of Formation which still applies within a Decurion style Detachment. For example, you would not be able to take 2 Canoptek Formations within a Decurion Detachment for the ITC. 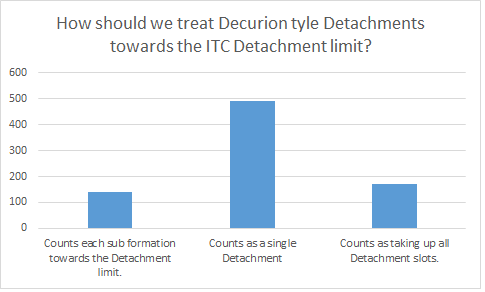 How would you like to see Come the Apocalypse Allies handled for the ITC 2015 season?

This was probably the most contentious issue and the one that will make the most waves. However, it is important to address these issues fairly. I have been quite vocal about my position on this topic: I do not like Come the Apocalypse Allies at all, it really kills the immersion of the game for me. Some of the combos aren’t so bad, such as  Knight in a Chaos army for example, or Astra Militarum with Nids to make a Genestealer Cult. However, for every 1 cool combo you see like that on the table, we get many more where it is 3 Flyrants slapped in an Eldar list, or something similar. It turns out, most of the gamers in the ITC community also dislike CtA allies. 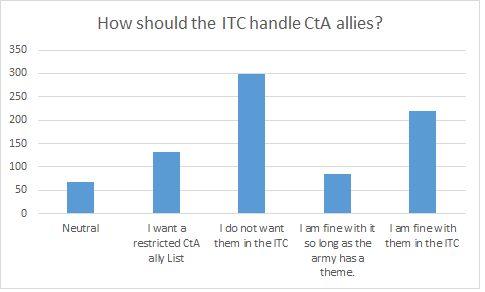 I also compiled the data in a different way, to show general attitudes towards CtA allies as of the 5 questions, 3 of them were generally negative towards CtA allies. When you view the data this way, it becomes even more clear that most gamers do not enjoy CtA allies in their events. While I truly do empathize with those who have modeled up cool armies that utilize CtA allies, I have to say on a personal level I am pleased with the result of this poll. Will CtA be completely gone from all ITC events this season? No, we will have certain formats at big events like the LVO, where these will be good to go for those who really want to use an army they modeled up. You will not be seeing them in the 40k Championships format events this season, though. 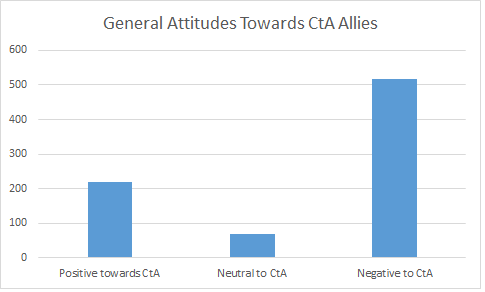 How do you feel about Ranged D weapons in the ITC?

This is probably the second most contentious issue in the poll as it provokes strong feelings on either side of the debate, and, both sides of the debate honestly have good points. D weapons help to mitigate some of the really powerful units in the game such as Deathstars and Knights, but can also be really unenjoyable to play against when they roll that 6. As you can see, the vote went against Ranged D weapons. 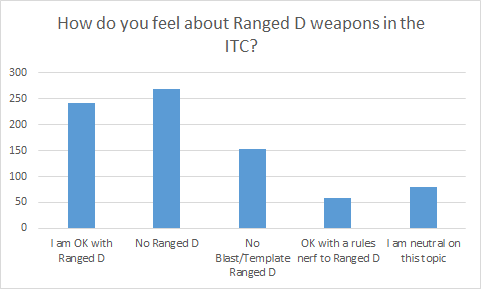 While it looks like a narrow margin, if you compile the general negative and positive feelings as with CtA, you start to get a better idea of the bigger picture on this topic. Most folks do not enjoy simply picking up their models. I can understand that. Personally though, I was neutral on this topic. I don’t mind playing against most Ranged D weapons generally (some of the mega blast versions are too just too much, IMO), but I also tend to play MSU lists where the impact is much less. The main impact here will likely be on the Lynx, which was the most points efficient D slanger, and the most accurate, too. If you bought and painted one of these, again, I 100% empathize. You won’t be seeing them in ITC 40k Championships format events this season, but we will have other format events where you will be free to use your cool models. 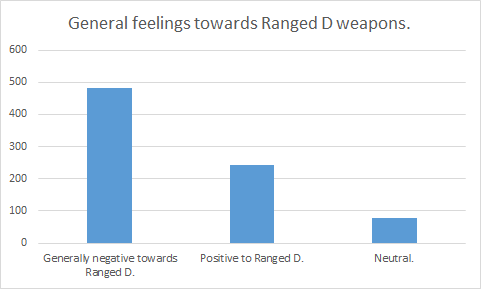 Would you like to see any changes made to the ITC Tertiary Missions?

One of the issues brought up most frequently in critiques of the ITC format are the impact of First Blood, and introducing a bit more variety into the missions. So, we included this poll question to see how much of the gaming population felt that way. Turns out a lot of folks agreed! So, we will be introducing some custom Tertiary bonus points into our format to mix things up a bit and to mitigate the always contentious First Blood point. I was actually surprised at how many voters felt this way, I thought the book bonus points would win out, but I was very wrong on this one. 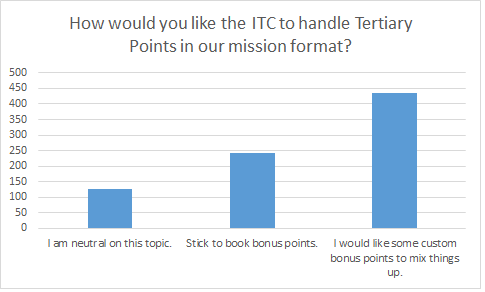 Would you like to see any changes made to the Maelstrom portion of the ITC missions?

In keeping with the statements above, we often received the critique that in our format the Primary mission was too critical to success despite it only being 1 point over the secondary. However, the logic of the critique is clear in that winning the Primary and First Blood means you can only ever tie a game in the 2014 ITC format. We put forth the question on modifying the format to the community to see if others agreed. Turns out they did. This result combined with altering the Tertiary Mission points means that while the basic ITC mission format is still the same and will be intuitive to anyone that is accustomed to our missions, it has been slightly tweaked enough that we will see significant changes to mission strategy while also including a fair bit more diversity in mission format. 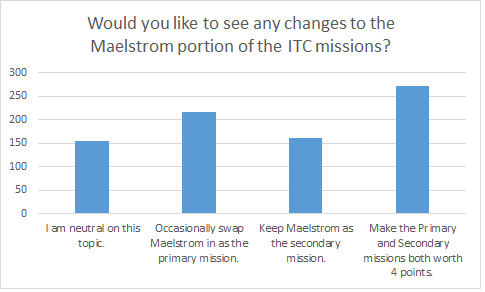 Well, there you have it. The people have spoken and policy will be set for the ITC 2015 Season (which runs through the next LVO). While not all of us will agree with all of the changes (or lack of changes in some cases), this represents the desires of the gamers in our community. We all make small compromises in order to have a baseline rule set, and to grow our events and have fun!