Quick and Easy Flayed Ones Conversion

You are here: Home › 40K › Quick and Easy Flayed Ones Conversion

Stage Fright, Go Away, This is My Big Day 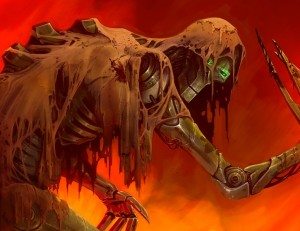 Oh the Flayed One, you who have gone from obscure model rarely used to being in the spotlight. When I first got into Necrons, I bought a big lot off of eBay and had a bunch of metal Flayed Ones. My first thought? Sell those suckers as fast as I could! I made a pretty penny off of those models as the new ones had just come out and people were very disappointed at the new models. I just couldn’t see myself using them very much so the money they were worth offset having them in my collection.

That was a few years ago and people still don’t want the latest Flayed Ones models. They come in at $45 a box for five putting them at $9 a model for a guy carrying a carcass on its back. Yeesh. Now we see people wanting to field twenty or so of these bad boys with their 5 attacks apiece, shred, and infiltrate making them a steal at their low points cost.

My first introduction with Frontline came with the then new Matt Ward Necron codex and it was their Wraith and Spyder conversion articles that really inspired me to get into Necrons in a competitive way. Now we have come full circle with my easy peasy Necron Flayed Ones conversion article that might get you cracking on a competitive list. Give me a moment, I’m all Verklempf here. This is the proudest day of my life…..(wife, baby, graduation, job)….er my 23rd most proudest day of my life!

The concept for this monstrosity comes from a series of books by David Wellington in Monster Island, Monster Nation, and Monster Planet. In Monster Planet, a group of smart super powered zombies force a surgeon to operate on some basic zombies, removing their hands and the skin and flesh from their forearms. Then they took the radius (that forearm bone) and sharpened it into stabby daggers of death. Gruesome and terrifying. This was what I was hoping for with my conversion.

I went through my bits and took out some leftover Necron models with Warriors, Lychguard, Deathmarks and the like. These became the basis for my Flayed Ones. I wanted to showcase a ragtag set of models that have fallen to the Flayer virus, showing that no one was safe.

In searching for an appropriate claw, I came upon the lowly Hormagaunt Scything Talon. These small claws were just the thing for my conversion purposes. I simply cut off the ends of the claw, trimmed up the hands of the Necron models and glued them together.

Running short on claws I also found another great bit, the extra appendages from the Spyder sprue. Some have just the claws while others have both Spyder bits and claw bits. I think the basic warrior ends up looking the best as you can hunch them over and with the claws it gives them a menacing appearance. Take a look at some of the models I’ve been able to kit bash together to make my Flayed Ones pack. I’m pretty pleased with the end result over all.

I’m also thinking about adding some decay to my Flayed Ones with a Dremel, carving out parts of the body and adding a sort of rust decay look. Then painting them in my normal style, adding rust to the decayed portions and throwing on some blood and gore to bring it all together.

Here are some basically done Flayed Ones from the group above that I finished for an event: 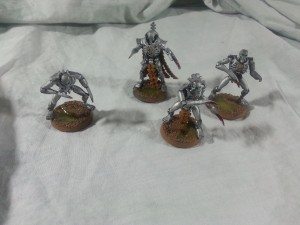 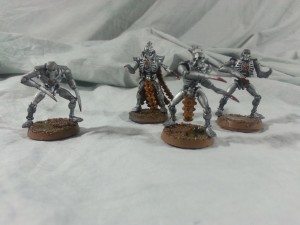 So a set of 20 Flayed Ones if purchased from GW retail would set you back $180. Two boxes of Warriors would be $72.50 and many bits sellers have Hormaguant claws for sale. Hoardobits (one of my favs) is out of stock at the moment, but does sell 32 for $13.50. You could even pick up a lot of used Hormagaunts for about a buck a model so you are looking at $80-100 for twenty custom built Flayed Ones. Not bad!

So there you have it! A quick, easy, and decent looking flayed one conversion that won’t break the bank for a big gob of these flesh eating metal skeletons. Go forth and shred!

8 Responses to “Quick and Easy Flayed Ones Conversion”