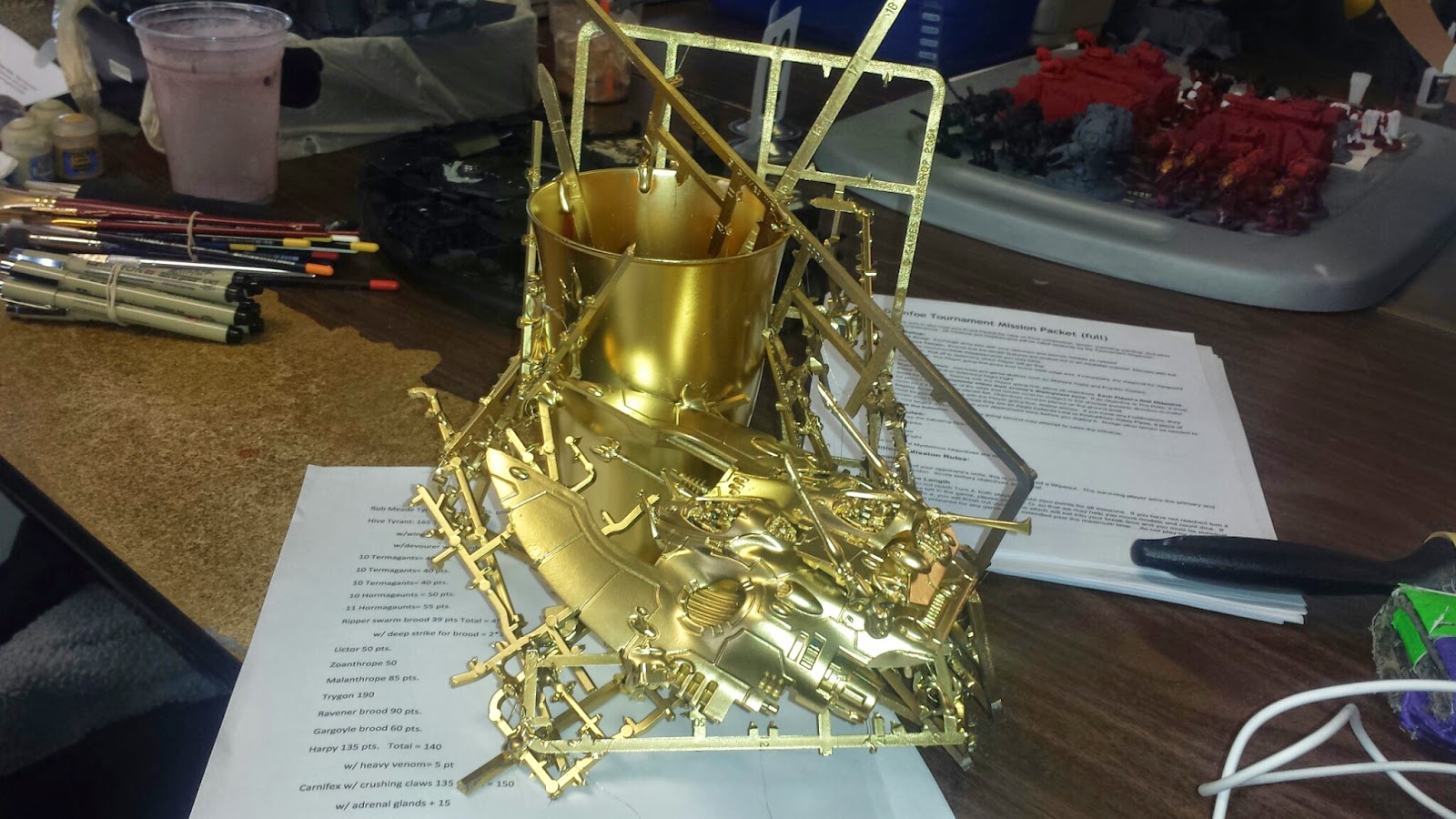 We had another great time running the Goldensprue Cup last weekend. The players were awesome and the competition was fierce. At 20 players, this was the largest 40k event our club has run yet and I hope we can continue to host great events in the future. We have a few opportunities for improvement, as always, but overall I’m declaring this one a success. 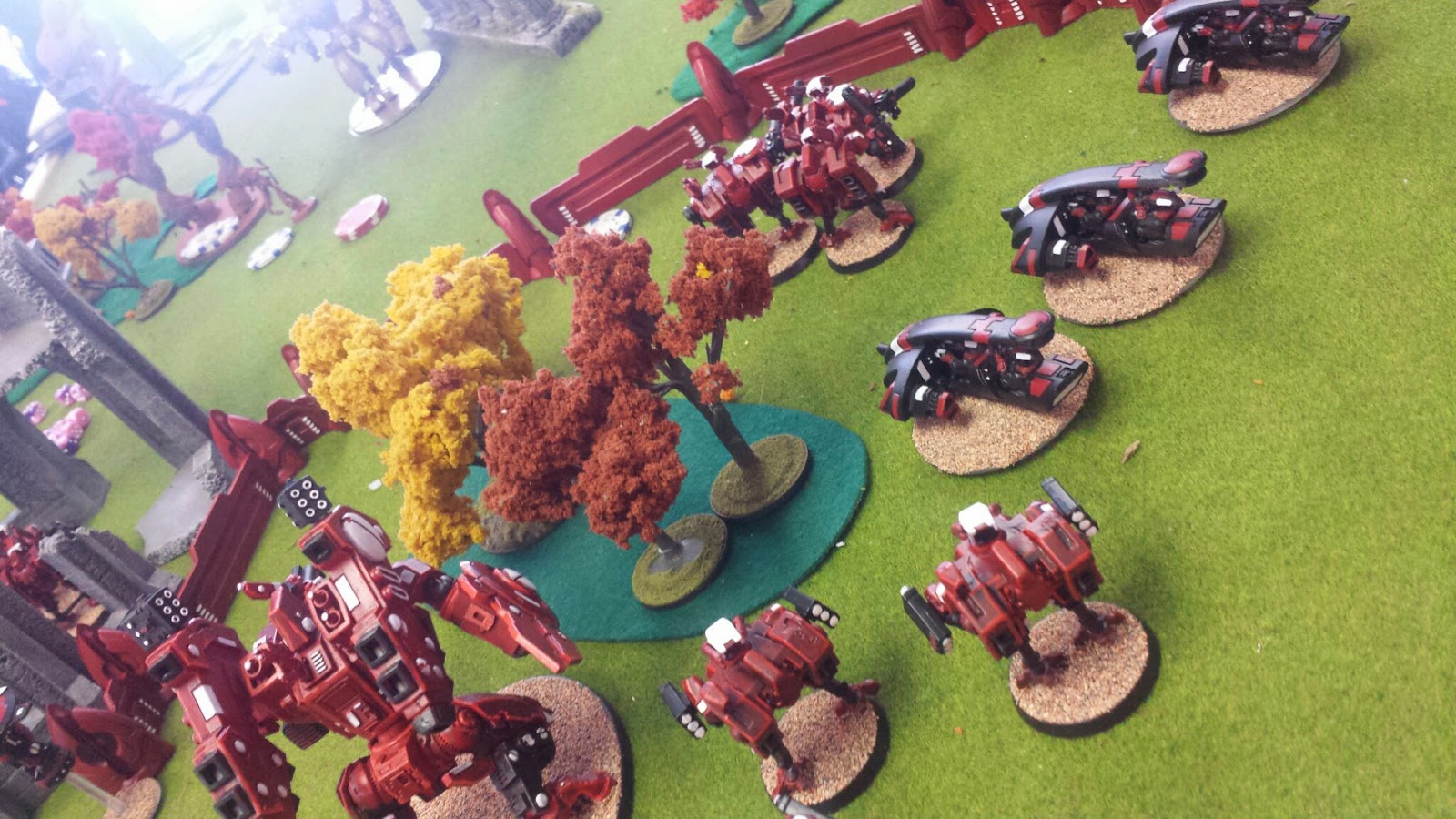 You can find the full list format on the Grimfoe events blog. In a nutshell, the lists are a Modified Highlander where many of the similar units are grouped into single selections (all Dreadnoughts count as “Dreadnought”, for example) and some dedicated transports have a 0-2, 0-3, or 0-4 restriction instead of 0-1. Additionally, there are no source, ally, or detachment restrictions.

When I polled the players on whether they prefer having the additional Dedicated Transports, they all agreed that it was a good move. It is my opinion that Dedicated Transports are like Troops in that they are part of the backbone to any army. Also, they make the game more fun and and grant mobility to some units which pale in comparison to units like Bikes and Beasts. This will be staying for the next singles event.

I am considering lifting the counts-as restriction. All of the list mistakes we had were due to confusion over that restriction. List mistakes do happen, but it does seem to be a signal that this rule is just too confusing. Also, it may actually be too restrictive and impede on some of the fun. Why not take multiple kinds of Dreadnought? Additionally, keeping up on which units count as other units is a huge logistical challenge, particularly when you start to include Forge World. I’m pretty much all but convinced that I’ll be removing this and restricting on unit entry only. Yes, that means some players will have additional Land Raiders and additional Chapter Masters with the use of Named Characters, but I think this is the right call.

In addition, the players were very pleased with the Modified Highlander in general, and that will also be remaining for the time being. 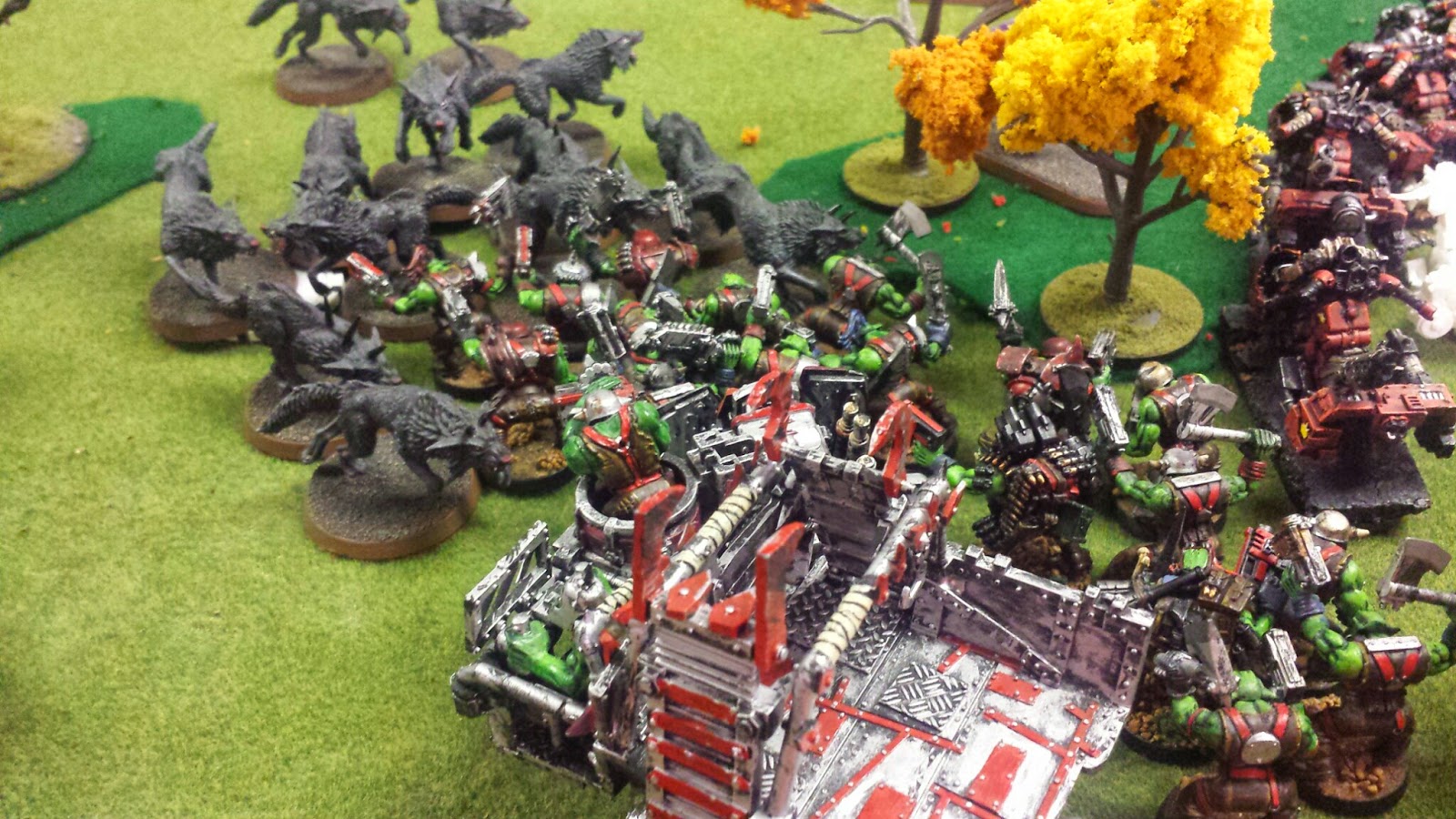 You can find the full Mission Format on the Grimfoe events blog. In short, we use 3 basic missions for our primary and secondary missions: Hold Objectives, Purge, and Tactical Objectives. In Hold Objectives, you score for holding objectives at the end of the game. Purge is the same as Purge the Alien, but bonus points are rolled in for destroying Superheavy units.

Tactical Objectives was introduced as a way to speed up our games. Fitting 4 games in order to have a definitive winner at the end of the day was really tight. Generating Tactical Objectives every turn just took way too much time. So, instead I used a mission similar to one of the missions from Da Boyz GT 2014 and, I believe, the “Mission Catalog”.  This mission, starting on Turn 2, granted one TacO point at the end of your turn for each Objective you were holding and for each unit you killed.

It was a very simple and clear way to go about doing it and pretty much had the same effect on the game results: rewarding bold players and punishing craven ones. The big difference was that all of the players seemed to agree that the games went far smoother than when they were generating specific TacOs every turn. This version of Tactical Objectives will be staying for the next tournament.

One criticism of the missions was that there was a lot of focus on kill points with the actual Purge mission and kill points in the Tactical Objectives. I will review whether or not this is a bad thing. MSU armies are fun and effective right now, but it is nice to have mission objectives which counter this. Also, it is a great balance against summoning armies and, if I’m removing the counts-as restriction to list building, this will become even more important as armies will have more Warp Charges at their disposal. 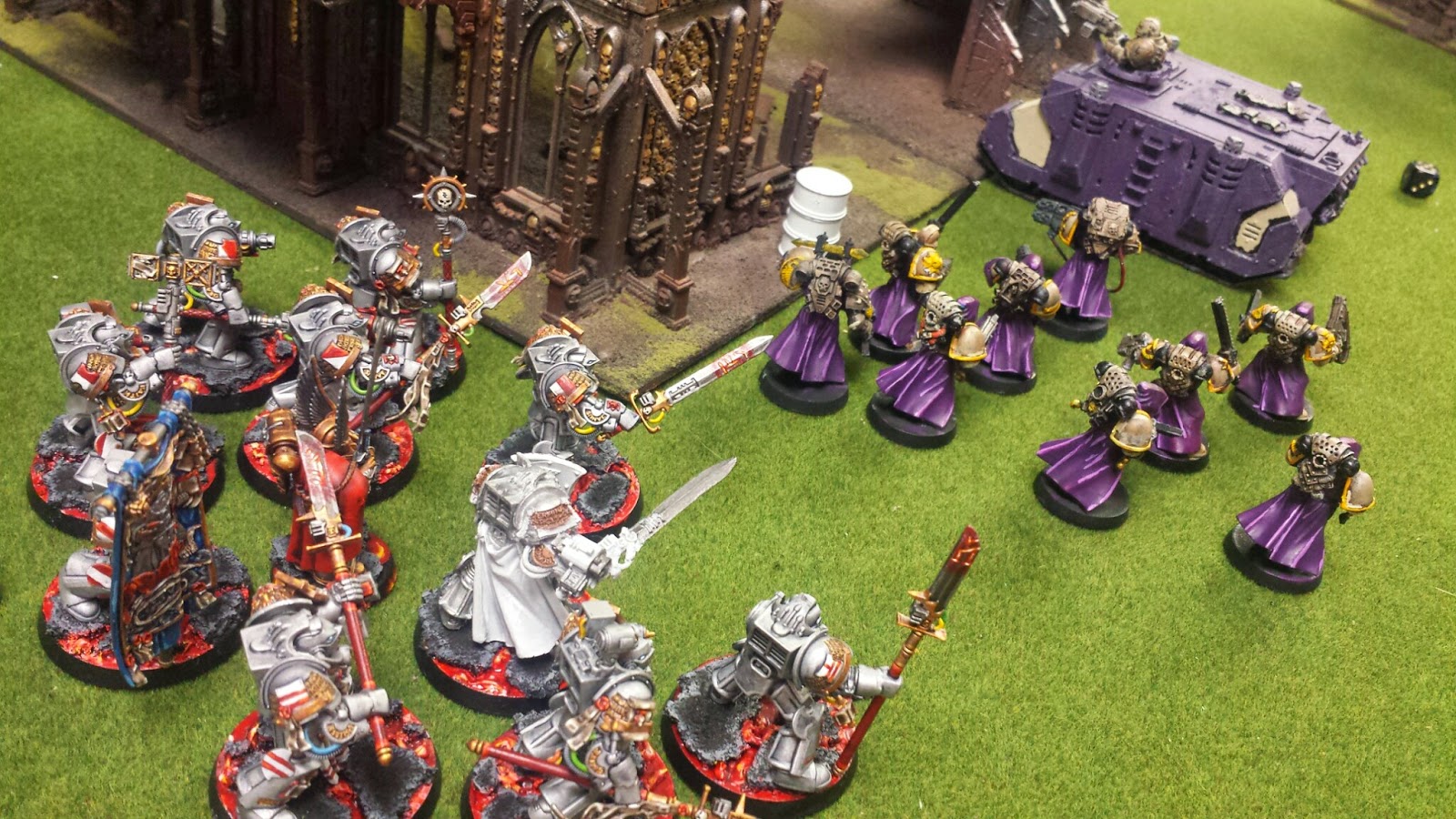 You can view most of the lists here:

As you can see, and as I mentioned, at least two of the players have list errors (one extra Librarian in one list and one extra Dreadnought in another list). I doubt this played a huge part in the overall results. The 1st-3rd Place in both Overall and General all absolutely deserved their place. However, it does stress how convoluted that particular restriction is and that it needs to be removed. 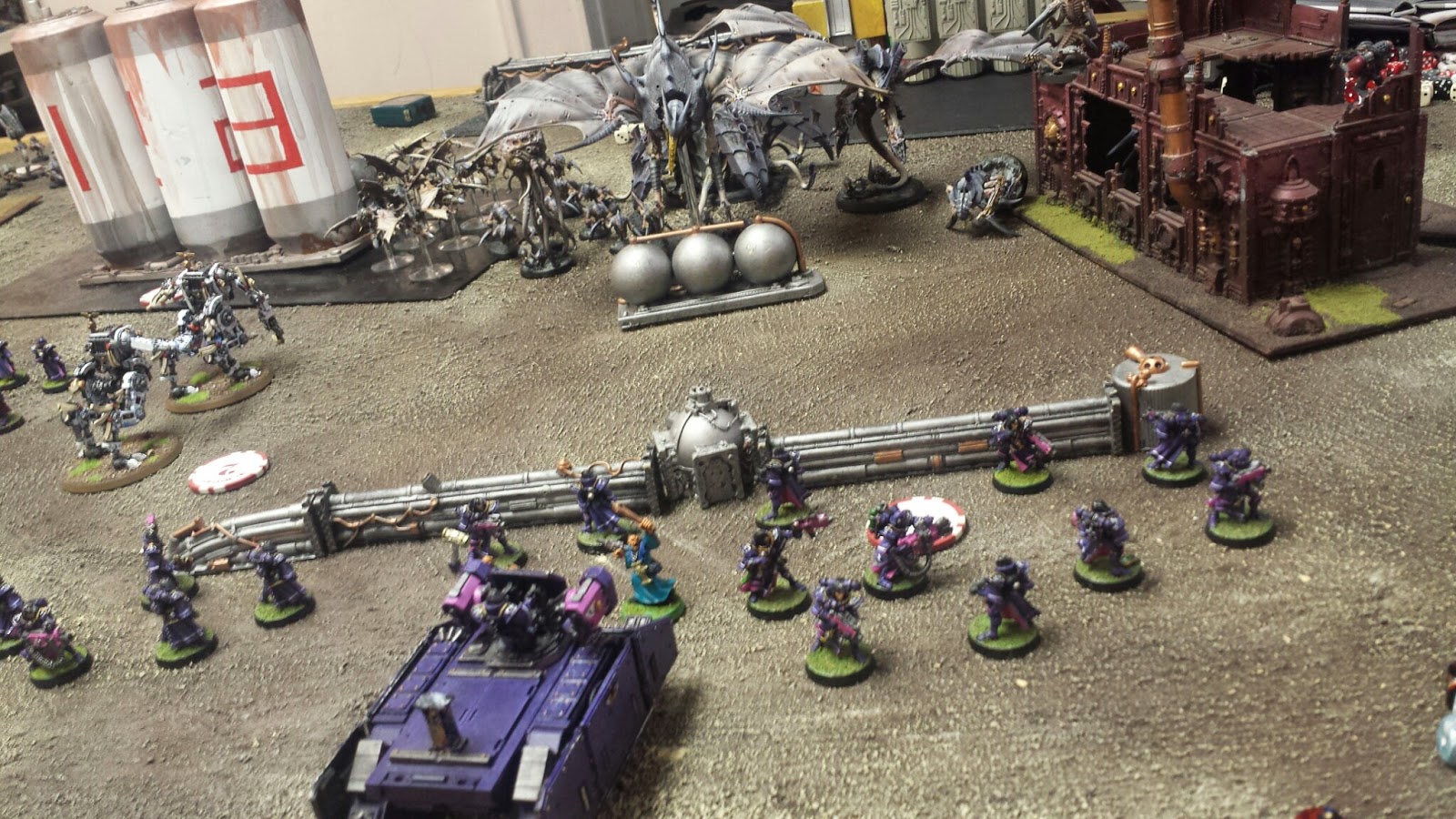 Because we had 20 players, we had 2 undefeated players, but we used strict Battle Points as the tiebreaker. Pairings were mostly done swiss style, with some re-arrangement if folks ended up paired a second time. Note that the Ringer is not listed here and that I’m waiting on some confirmation of how to do the math for the ITC points before releasing those calculations.

Charissa’s Daemon Princes and summoning ruled her tables, but at the end of the day, she didn’t score as many Battle Points as Todd.Todd’s super-fast ground-based Daemons list was a monster! It was a blur on the battlefield and nary a unit could hide from its ferocity. Todd’s list clearly doesn’t care about what mission it is playing; it is capable of tabling army after army, particularly in a Highlander format which is unlikely to have an over-abundance of units they can’t kill in assault.

The rest of the field, particularly the top 25%, really shows the variety which a Highlander format brings to bear.  In all cases, it was the armies and players which played aggressively (but smartly) who topped out over the crowd, and that’s something I like to see. 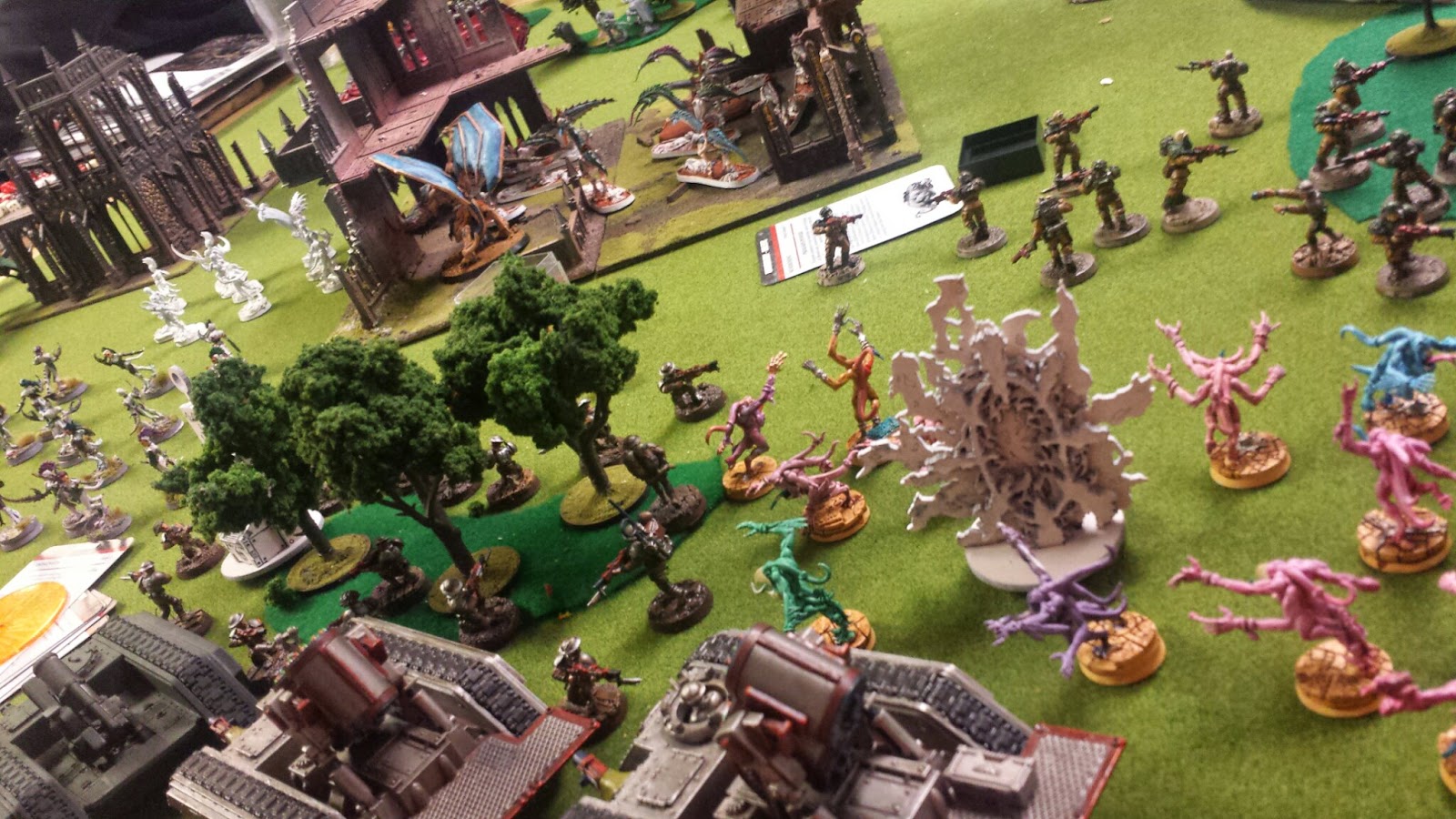 We had an extremely good time. I’ve already summarized the reactions to the format and how we’re going to adjust things in the future. What matters the most is that folks had a great time at the event and want to come back again for another go. The next event will be a Team Tournament, though. I’m not 100 percent certain on the exact format it will shape out to be. Folks have enjoyed the Modified Highlander so much that I’m almost tempted to run it with that in mind. We’ll see; expect an announcement in the coming weeks.

You can check out the Facebook album for more pictures of the event.

Check out my blog post for some pro-quality pics of all the armies that Harley was kind enough to take with his badass camera and camera skills!

← Daily Awesome Conversion
There can be only one! →