Whither dost Thou Wander, Battle Sister?

You are here: Home › 40K › Rumors › Whither dost Thou Wander, Battle Sister?

Ah, the Sisters of Battle.  Most recently renamed the Adepta Sororitas by Games Workshop since they could not trademark the name ‘Sisters of Battle’; the nuns with guns have a long an storied history in the Warhammer 40,000 universe.    First released by GW in 1998, the Sisters of Battle are the military wing of the Ecclesiarchy, which is the predominant religion of humankind in the 40k universe.  Religious fanatics in the extreme the Battle Sisters are best known for burning heretics and chewing bubble gum, of which in the 41st millennium there is none.  Despite having a kick ass back story and a large following within the gaming community, the Sisters of Battle have the distinction of having the only range of models from Games Workshop to have not been updated or converted to plastic for 17 years.  They are also the only faction within 40k that are still rocking the cool White Dwarf codex, not to mention the very sexy bob haircut. 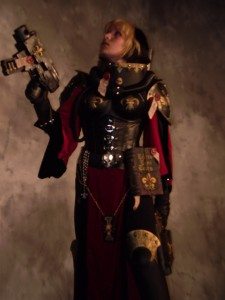 It’s become a running joke within the 40k community that the Sisters will be getting an update in the near future.  Every year a new article comes out on BOLS or Faeit212 stating that they have heard from a reliable source that the release of a new codex and plastic Sisters models is imminent.  The community gets itself whipped into a sweaty fervor.  Internet loud mouths flood comment sections with ‘these rumors are crap and you’re fat’ comments followed by ‘I’m not as fat as your mom and my friend’s brother’s cousin said he saw the plastic models’ replies, all culminating into a collective self loathing as the chatter slows down and we all forget what the hell we were talking about anyways.   The reasons as to why we have not seen any updates since the early 00’s are speculated to be numerous and varied.  The prevailing rumor is that the metal sculpt has been difficult translating to a plastic multi-part mold and that the perceived interest in the product line did not justify the cost of making them.  Many people had thought the line was due to be Squatted out of existence until GW gave us the half-assed White Dwarf updated codex which not only did not see new units or models released but took away a lot of what made the Sisters competitive on the table top.  My personal belief is that GW is waiting to sell through the metal kits they have before releasing any new plastic models.  I only say this since the product line available through GW’s site has been slowly diminishing for years.  Where there used to be multiple sculpts of each special and heavy weapon, you now can only purchase only one of them from the site.  Regardless of the ifs and whens regarding the release of an updated Adepta Sororitas (might as well call them by their proper name) there are some things I would like to see when it eventually does happen. 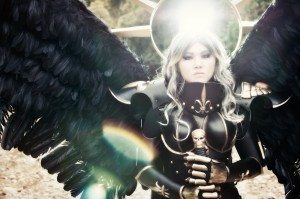 Very cool cosplay from Jna. Check it out!

Bring Back the Ecclesiarchy! – Instead of keeping the faction strictly confined to the Battle Sisters line, why not expand it and re-brand as The Ecclesiarchy?  This would open up the faction to additional units such as preachers and militia.  We could have HQ units that are high ranking preachers of some sort.  Break it up!

New Vehicles – While having fast moving multi-melta toting Rhinos are cool, the Sororitas definitely suffer from not having more heavy vehicle options.  Why not give them a Predator varient?  They could also do with having a dedicated flyer unit, so perhaps a varient of a Valkyrie?  These are existing kits that could easily be upgraded with Adepta Sororitas weapon varients.  I think a Land Raider Crusader/Redeemer would be a perfect fit for the faction.  There are a lot of Sororitas units that are geared towards assault, so it would make sense that the faction would have access to assault vehicles, right?  RIGHT?!

Give me Dat Faith, Gurl! – Remember when basic Battle Sisters were able to get rending attacks?  Me too!  Let’s go back to a list of 4 or 5 Acts of Faith that all Battle Sisters have access to, not just the 1 per unit.  The Acts of Faith should be tied to a Leadership test , with the success of the act dependent on the amount of models in the squad.

Ramp up the Fervor – Let’s really push the point that the faction is made up of religious fanatics.  Give the models Rage and Adamantium Will.  I wouldn’t say they should have the Fearless special rule, but I don’t think Stubborn would be too much of a stretch.  I remember reading a short story where an Imperial Guard unit was witnessing the Battle Sisters in a fight with Orks.  The Sisters were crying, laughing, and singing hymns while battling the greenskins.  I want to see that madness translated into their rules.

Psychic Powers – I’m not saying that the Battle Sister units should have access to psychic powers, but at least the Ecclesiarchal units could have something resembling them.  I’m not sure how I would implement them but it would be cool to have a psychic discipline based of off healing and boosting the toughness of their units, king of like the Lore of Life in Warhammer Fantasy.  That might be too much, though.

So what are your thoughts on the most recent batch of Adepta Sororitas rumors?  What would you like to see in a new release?

14 Responses to “Whither dost Thou Wander, Battle Sister?”