Prelude To A Robotic Dream. As always, check out the Tactics Corner for more great articles! 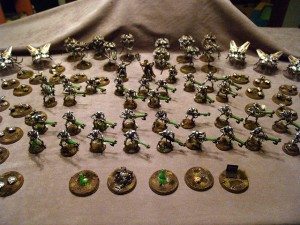 Necrons were my first competitive army and also my first introduction to Frontline Gaming. Three years ago I was in a slump with 40k. My Daemon army was getting shellacked by Dark Eldar and Grey Knights and I needed something beefier. I credit Frontline with giving me a ton of help with my Necrons in the form of their tactics articles and videos back then and I’ve been hooked ever since.

Flash forward to today and we have the new Necron Codex. I, for one, am very excited to get back into my Crons and see what I can do to come up with a strong list that will take me into the next tournament season.

With Frontline on battle report hiatus, take a look at these two new Necron battle reports to slate your thirst a bit, then check out the tactics thoughts after the videos.

In both instances here I don’t think my opponents had the hardest lists, but there were certainly threats in there. The Necrons did well against the Knight and should have took it in one turn, but that’s dice for you. Once the knight fell I was able to focus on the high priority threats and finish off the rest of his army.

Against the Space Marines, some of that was bad choices as I felt my opponent should have hung back a bit and used his Devastators to try to take out the Spyders, but he came too far forward and enabled me to charge him full force. Turn three I had everything in his deployment zone and controlled the table having only lost a few scarabs. 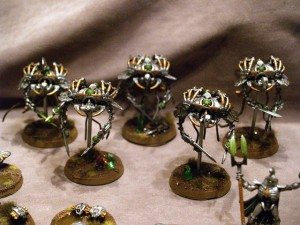 I’m personally really wanting the Decurion Detachment to work. The benefits that the Detachment gives to the army are pretty big in my opinion. Let’s take a look at what this detachment of formations gives you.

Living Metal ignores shaken and stunned and gets It Will Not Die.

Cost – Almost 500 pts without upgrades for the required Reclamation Legion

Forces Certain Units – You are required to take certain units in the detachment and therefore locks you in to certain kinds of builds. 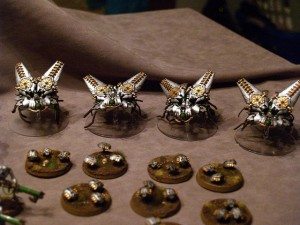 The Reclamation Legion group gets a 4+ Reanimation Protocol Roll, Move Through Cover, and Relentless. Zahndrekh goes with the 20 warriors and buffs them as needed, switching between warlord traits to give them the best benefit each turn.

I’m interested in taking this list against some harder lists over time to see if it has the chops to make it in the tournament scene.

I feel the thing the puts the Decurion detachment up there in my mind is the overarching bonus to Reanimation Protocols. Everything in the army having a 50/50 chance to shrug off any failed save is gold in my opinion. (Yes I know Instant Death reduces this by one, but it is still very powerful). The list has some AA with the Night Scythes, all the Gauss should have a good chance against tanks, and the Wraiths are now one of the best assault units in the game and even more durable with Reanimation Protocols.

It has been an army that impacts in the middle of the game so far as most of my damage has happened on turn 2 or later. I think it could easily be a list that gives up First Blood with savvy generals and the lone Spyders but should be able to weather fire better and last longer into the later stages of the game. Whether it can stand up to AdLance, Pentyrants, Centurionstars, and Eldar Fromage remains to be seen, but I am interested in taking it as far as it can go.

What are your thoughts on the Decurion Detachment? Is it a must have or a just for fun list?

Erasmus the Ur Priest

It strikes me as low on long range dakka for a necron list. But it’s got durability and hitting power. It must be weird for opponents as I imagine the list is hard to anticipate and probably behaves differently than what people would expect.

I have played it twice with the Destroyer detachment and the CCB lord, warriors with barges, and of course the immortals in a NS… It’s pretty nasty and my buddy just doesn’t want to play against it anymore… Warriors are damn near invincible with the barges and the 4+/4+ with a Reroll of 1 on reanimation…

Ah yeah! Totally forgot about the Reclamation Legion getting rerolls of 1 within 12″ of the overlord/character. Even more resilient. I envision a lot of Necron armies being able to weather the storm of fire and wear down the enemy until there is a tipping point when the enemy crumbles. Or at least I hope so.

Yup, it’s just a battle of attrition… My friend just could not get rid of my warriors. It was super funny as I could not fail a reanimation roll, lol…

I’m excited about the decurion detachment! I think it provides some fun and effective options.

Do you think the durability boost makes up for the lack of ObSec? While the Decurion is hard to kill off, it can’t exactly contest objectives easily.

I honestly can’t say, yet, haven’t had a chance to play it. Been too busy with LVO prep to get any games in.

Solid list, looks fun. One suggestion would be to drop some scarabs and get a ghost ark for the 20 warriors. Adds the shooting equivalent of 10 warriors and can replace fallen warriors. Could even put your warlord in it to increase his re roll 1’s bubble.

Yeah, I’ve been thinking about that.

He has an awesome Warlord trait (Zealot) and can choose a new Warlord Trait each turn, plus he has a 2+. Makes him quite the utility character.

For one a buck fifty in points, he is very cheap. Don’t forget his ability to also steal others USR’s as well.

I believe its shield vains or scope for the Tomb blades.

There is discussion whether the “gain a special ability” text is a continuous thing (i.e. you get it only so long as you are within 12″ of the Spyder and it is alive) or a triggered one (i.e. if you are within 12″ when it is activated, you have it until the next turn no matter what happens.)

Well time to bring the D.

With the durability Decurion detachments provide, and the buffs to Wraiths, Im going to go out on a limb and say Decurion is for competitive gamers only. When people start showing up th the flgs with this stuff, it wont take long for others to shy away from playing vs Necrons. I think its great there is another competitive army in the mix for players that are into that – but I see Necron players having to endure the same ridicule and cold-shouldering that Taudar, WS spammers, Flyrant abusers, etc. have experienced in the past year or so. Cool stuff, just a bit too powerful to allow the average players to enjoy it in a casual setting. If they gave every codex this treatment, there’d be no conversation. But they didnt.

>cool stuff, just a bit too powerful
>Im going to go out on limb
>it wont take long for others to shy away from playing vs Necrons

Guy, I think you need to re-evaluate what you think “too powerful” is. If you look at an army that took six different one-off units and doesn’t have ObSec and go “CURSE YOU GW AND YOUR OVERPOWERED SPAM ARMIES FOR COMPETITIVE GAMERS”, chances are the problem isn’t with the game, it’s with you.

The Decurion is, at the very best, a mid-army that will annoy but not seriously challenge Tau, Eldar, IG, SM, Knights, and Tyranids. It’s got a few neat tricks, but it’s not gonna dethrone any of the top competitors.

The most it will do is frusterate people

Just depends on your play group… My club def hates the new Necron dex. Nobody wants to play against it. We miss the days of 3rd through 5th Ed…lol. We are competitive, but try to do it with low key builds.

Yeah, as with politics, so much of gaming is local. Your meta, the culture of your game group, the armies you play, the terrain, etc. All really impact the way you see the game and what you perceive to be good or bad.

Im interested to see what a good general can do with it vs the big dogs.

Or is that if just the RECLAMATION LEGION formation is used? Or does it stack with Decurion?

I’m starting to question my own logic/sanity reading GW rules.

Yeah, totally forgot to add the reroll for ones. It is just for the reclamation legion.

My basic plan is to take a Decurion… make it the core of the army in more than name, and combine it with a pair decently equipped Canoptek Harvest auxiliary.

If I need to overwhelm an army that tends to sit back, I can do that with 4 great, mid-range shooting platforms and 4 great close-combat units… oh, and a pair of monstrous creatures as well. If I need to turtle up. then I have that awesome 12 inch leadership bubble and some rock hard resilient troops.
My only problem? I can’t find the 4 boxes of Tomb blades. Oh, and FMC’s.

I’m wondering if the various “taxes” on the list make it worth it.

Is getting RP on the wraiths really necessary? They move through terrain and are super fast, couldn’t you keep them out of LOS early and then make a break for the enemy later?

Admittedly, I’m not a Necron player, but I REALLY like the idea of the synergy of warriors and the ghost arks. Have you tried making a CAD list to try and get what you have here? Crypteks give you the 4+ RP…

Anyway, I’m excited to see how Necrons do in bigger events.

I have been thinking about CAD’s and what not, but you have to pay “taxes” there as well. Crypteks are pretty expensive base and only affect one unit. Decurion affects the whole army, which is boss.

I mean I could try to do some more min maxing here andthere in a CAD, and I’m sure I will, but I’m just liking getting to play my Crons again, and with the models i have. Gonna have to buy a Ghost Ark!

It’s apparently the most frustrating plastic model to put together EVER MADE.

I just feel like having one or even two arks nearby a big group of warriors would be SUPER obnoxious for the person trying to kill them.

Yeah, I had one before….then I was like, I’ll never need this as I’ll totally need a bunch to make it worth it and I don’t see myself putting together any more…..lol.

I would have added two or more spyders to the formation.

You cannot with the canoptek harvest. The entry says, “One Spyder” where when it talks about the wraiths and scarabs it says, “One UNIT of scarabs…etc.”

I just played against Necron today.
I understand that it is cheated with RP 4+. +reroll 1… No sorry, a feel no pain 4+ to a whole army with a reroll possible on 1… Put 100 attacks with 30 wounds on a single model : saved 30 wounds lol…

GW just fuck you to not play your own game.