We’re on a Boat! Cruisehammer Recap

Gorgeous beaches, fresh air, open seas, amazing food, outstanding service, bars around every corner and more await you on the next big thing to happen to war-gaming since F.A.T. Mats!  Of course I’m talking about my experience of the first bi-annual Cruisehammer run by the gents from The Seattle Heart of Fire Tournament (TSHFT). 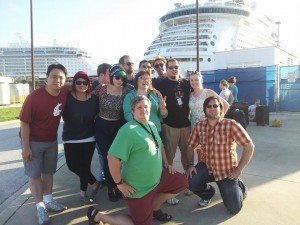 Howdy readers, Mr.MoreTanks here, member of Team0Comp and this is the first of what I hope will be many articles of mine on Frontline.  I’ve been gaming for about a decade now and in the past few years I’ve really gotten the chance to expand my tournament play and war-gaming experiences by traveling.  I’ve traveled to dozens of tournaments at great venues with awesome people, but this one guys takes the cake.  Move over LVO, there’s a new way to party after a day of rolling dice.  Oh, and did I mention that it’s an ITC event too?  Cause it’s an ITC event too.  Got to get those sweet ranking points! 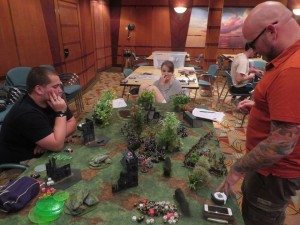 First I’m going to look at the tournament.  The boys with TSHFT have been doing tournaments for a while now, so they’re no stranger to organizing and running things.  Originally planned as a 5 round event, the tournament was consolidated into a smaller 3 round event so that it took place on a cruising day exclusively, rather than preventing people from going ashore.  Unfortunately, there were precious few gamers on the boat and the size of the event was a little small; but that just means that there is room to grow!  We had plenty of room for more tables as you can see by the picture and there were more rooms available to rent should the event grow and more tables need to be added.  Terrain was plentiful and of good quality, a common concern at most events.  TSHFT events though work hard to ensure an excellent standard for their terrain in both quantity and quality.  Though this has been an issue in the past at events due to how quickly the events have grown, it’s an issue that has been addressed and is being corrected.  Cruisehammer and TSHFT use the BAO/LVO formatting along with their FAQ; 1850pts with 2 detachments, FW allowed, and limited Lords of War; pretty much all the good stuff that allows for a competitive event, while not letting things get too nuts.  Earn those sweet sweet sweet ITC points while cruise on a big boat! 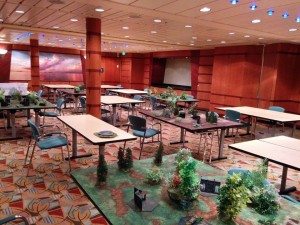 I snagged Best General in the 40k event, but the cruise itself was the real trophy.  I’d never been on a cruise before, let alone out of the United States.  On our seven night (that’s right, seven!) we hit Haiti, the Grand Cayman, Jamaica, and Mexico.  Each stop was unique and offered excursions through the cruise line or private parties on shore offered similar opportunities, usually at a discount but without the cruise line quality of service guarantee.  Scuba diving, tours, authentic cuisine, beautiful nature hikes, the list goes on.  The service is excellent from both tour guides connected to the boat as well as those who are free agents.  As one determined van driver said in Jamaica, “There’s no problem, only situation!” 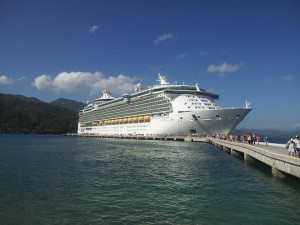 For those of you who have never been on a cruise before, let me just tell you, they have everything you could imagine and more.  Multiple pools and hot tubs (including adult only pools which was very nice), a casino, nightclub, basketball court, a cigar bar, a full theater (with some great comedians!), rock walls, an ice rink, shopping, and even a Starbucks were all aboard our awesome ship, Freedom of the Sea.  There was always something to do.  I was disappointed though as I felt like there was so much fun stuff to do, I didn’t even make it to all of it.  A good excuse though to go back for sure. 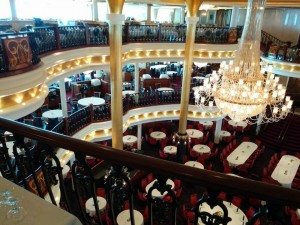 The dining room was three stories of epic.  You sit at the same table every night and have your dinner at an assigned time.  You have the same servers who provide outstanding service and by the third night already have your favorite drinks memorized and simply ask, “The usual?”  If you’ve never experienced top notch guest service like this before, you’re in for a treat.  It did take me a couple days to get used to being called sir and having my chair pulled out for me and even having them put my own napkin on my lap, but after the initial “culture shock” of pretending to be way richer and a bigger deal than you are, it’s pretty amazing service.

Did I mention the bars?  Cause I really need to.  There were bars everywhere.  You couldn’t go twenty feet without running into another one!  My fiancé and I splurged since we won our tickets and bought the ultimate drink package for the trip.  Basically we’d walk up to the bar, and walk away with any drink we wanted.  From sodas, to specialty coffee drinks, to awesome and delicious adult beverages.  Let’s just say, the ship did not make money off of our drink package.  You don’t have to go all out too, there are multiple packages to fit your economic need as well as… liquid needs.  I haven’t had so much Crown Royal and Jameson in my life, and it was excellent! 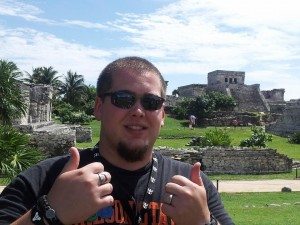 Having never been out of the country, I was eager to experience new cultures and explore some areas outside of the good ole’ USA.  I went on an excursion run by the cruise line to Tulum Mexico to explore an ancient Mayan city and then went onto an amazing beach with some delicious authentic Mexican food.  It’s something I will never forget.  Touring the streets of the Grand Cayman likewise was a new and amazing adventure!  My only regret was that the ship didn’t stop longer at these destinations!

So something really amazing that TSHFT does is that they put up Cruisehammer tickets as awards for their events.  TSHFT hosts somewhere between 3-4 events a year.  So between now and 2016, you have plenty of chances to win a ticket.  If you win one, then it’s an easy excuse to purchase another one for your wife.  The cruise is an awesome family environment, with plenty of options and spaces for you and your entire family, you and your special someone, or just you.  There will always be something for YOU!

Check out the TSHFT Facebook page and Cruisehammer Facebook page.  There you can find more information about this awesome event as well as other upcoming opportunities to score a ticket on this unbelievable experience.  The next events’ location is still being decided upon.  Though it looks like either Alaska or Mexico from either Seattle Washington, or Vancouver BC.  More details on that to follow.  Keep this event in mind guys, you don’t want to miss the next one!

16 Responses to “We’re on a Boat! Cruisehammer Recap”