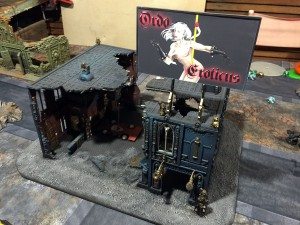 Hey everyone, it’s Adam from TheDiceAbide.com. Last week I got two of my friends over to drink all my beer and play a round of Beerhammer 40k!  As a couple of test subjects, I had them play Bierström, which has quickly become my favorite scenario in the game.  They were using the older set of objectives though (if you’re playing Beerhammer 40k at the LVO, be sure to check out the updated missions!), so I’ll be sure to list those out for you here:

Each player rolls 2 at the beginning of the game turn, re-rolling duplicates, and these are scored at the end of the game turn, just like the LVO missions.  In place of accomplishing one of the two objectives, the player may drink a beer instead.  Finally, if either player goes to the bathroom, their opponent is awarded a point.

12 Boyz: Nob with klaw and boss pole, in trukk

The Sisters first turn was fairly uneventful as Obi managed to roll anything above a 3… to make matters worse, his center Rhino immobilized itself on a crater.

Peter’s Orks moved up the field, though keeping a large piece of terrain between the Imperial Knight and his Stompa, and needing to sacrifice a unit in combat, thanks to Objective 6, his grots valiantly advance towards the Seraphim. In the shooting phase, his Stompa takes aim at the immobilized Rhino and manages to hit both it, and the Rhino next to it.  The immobilized Rhino was blown to smithereens, while the other lost it’s stormbolter, and to make matters worse, the Traktor Kannons plink a hull point off of the Imperial Knight. Before charging in the grots shoot a wound off of Saint Celestine, but fail their charge after suffering a devastating overwatch from multiple flame weapons.

Obi kept the game close though, quickly chugging a beer, while Peter did the same to compensate for his failed charge.

To maintain tradition, Obi kept his rolling on the low side, with snake-eyes to bring in his Dominions. His second shooting phase was looking bleak, until to all of our surprise, his final Exorcist shreds 3 hull points off of the Stompa. The Seraphim, not deterred by Peter’s objective to lose combat multi-charges into the Traktor Kannon, wiping out one of the unit, as well as the remaining grots.

In Peter’s turn, his Meks only managed to repair a single hull point, despite the oilers best attempts. Wurring up the barrels of the psycho blasta taking 2 hull points off his last Rhino.  The soopa rokkits simultaneously fire off in all directions, killing a single sister hiding in the ruins, as well as finishing off the Rhino. The Warbosses mob charged the survivors of the wreckage, and causing Obadiah to run to the bathroom… Not before finishing yet another beer though.

Finally one of the Dominion squads shows up to the fight, and fortunately it was the unit inside the Immolator, who decided that right behind the cowardly Stompa was the right place to unleash a torrent of Melta. The sight of that many meltaguns caused Peter to break the seal, running for the restroom. The Knight, obviously disgusted by the debauchery of the Ordo Eroticus was still trundling through the terrain at a leisurely pace. Hoping to get a powerful alpha strike on the Stompa, the Domions open fire, scoring 3 penetrating hits, but all hope was squashed when the Mega Force Field generators kicked in, stopping the entire wave of attacks. Frustrated, the Immolator targets the much softer Ork Trukk, a certain kill… but Peter was hot with his 6’s, and passed the Ramshackle test, meaning only a useless hood ornament was turned to slag. Not all was lost though, unsurprisingly the Saint managed to finish off the last of the Mek Gunz, giving sisters complete control of the flank.

The Stompa, clearly not impressed by the Dominions turns to face the newly arrived enemy, torching them with it’s skorcha, big shoota and embarked burnas, reducing them to a single model and the mob of slugga boyz from inside the Trukk, killing the last sister.  Not liking the gaping holes blown in it by the Exorcist, the Meks manage to get their gear together and fully repair the Stompa. To make sure there isn’t a single meltagun left to face him, the Stompa charges into the Immolator, easily squashing it beneath it’s massive feet… Feeling a bit cocksure, or possibly just full of beer, Peter didn’t finish a drink this round.

Finally the last squad of Dominions makes it onto the board, on the same side as the Stompa too, though in a stroke of tactical acumen, he decides to have them charge away from the board edge, so he can claim the point for Objective 3.  The Sister squad in the ruins also gets the message, rolling a 6 for difficult terrain to get away, though in the shooting phase they only roll a 3 to run, leaving a single model just barely within 12″ of the board edge! Again, the Exorcists open fire into the Stompa, scoring 6 shots which all hit, though due to the force field, only 1 HP is caused. The Knight seized the opportunity to get a shot at the Battlewagon in an attempt to slow down the Warboss and his boyz, though only a glancing hit is scored.

The Orks in the Battlewagon see the sisters running through the ruins and decide to learn them a think about runnin’, charging out and totally destroying all the Sisters, who managed to only cause a single wound between overwatch and combat, thanks to the Dok keepin’ them all pain free. The Stompa exchanged fire with the Knight, though due to it’s poor BS, didn’t manage to hit.

In what could be the last turn, the Sisters attempt to shear some Hull Points off of the Stompa, with the Dominions opening fire, though both penetrating hits were again saved. The Knight, now a short distance away from the Stompa fires, though with a critical miss manages to scatter back onto itself, causing it 1 HP of damage, and additionally shooting the Storm Bolter off of the Dominion’s Rhino. By now, the Warbosses unit has been reduced to 4 models, a single Boy, Nob, Mad Dok and Warboss. With it’s devastating charge, the Hammer of Wrath finishes off the last boy… which was shortly followed by the Knight missing all 4 of it’s following attacks. Not to be out done, the 3 Power Klaws of the remaining models swing back, but only cause a single HP of damage.. Now the Knight has the chance, rolls 3 stomps, yet doesn’t get the 6 needed to kill off any models, only causing a single wound to the Warboss.

The Trukk Boyz, feeling left out disembark to charge the awaiting Dominions, while the Stompa moves in to finish off the Knight. The shooting phase was uneventful, though the Trukk managed to deal the last HP required to kill the Dominion’s Rhino, but as if to disproove Obi’s lack of ability to roll a 6, it was saved by faith, for the first time all game! Receiving the charge with the Domions was perfect for Obi though, as the Nob had a power klaw and he needed to throw his Superior under the bus, unfortunately for Obi, the Nob failed to cause any wounds. The rest of the dominions were wiped out, while the Superior, failing at her task, fled. The Stompa charged into the Knight, causing another HP through Hammer of Wrath, bringing it down to 1, followed by the Knight swinging back, yet only causing a single HP with it’s massive chainsword. Finally the Nob and Mad Dok manage to deal the final 2 HP to the Knight, which then exploded and scattered directly onto the Battlewagon, but was saved by cover.

At this point, both players were chugging furiously, for Obi to maintain the lead and for Peter to try and catch up.

The dice was rolled and the game went on.

In a desperate attempt to cause as much damage as possible, the Rhino rams the Trukk while tank shocking the boyz, though the Nob, seeking a bit of glory managed to stop the Rhino dead in it’s tracks with a direct power klaw punch. With the Ork deathstar whittled down to nearly nothing, the Exorcist opens fire, killing off the Nob and dealing 2 wounds to Mad Dok, leaving both characters in the unit alive with a single wound each. Trying to make sure to lose the combat, the Sisters nominate the Seraphim Superior to enter a challenge, which was accepted by Mad Dok, the squishier of the two characters. Unsurprisingly the Superior fails to wound Mad Dok, who strikes back with 8 attacks, not only killing the Superior, but 2 other sisters as well. Not to be forgotten, the Saint poured her attacks into the Warboss, who rolled saved all his wounds, except one, and was slain. Sure that victory was close, Obi ran back to the house to once again break the seal.

Trying to make up points, while simultaneously drinking a beer, Peter moved the Stompa up to fire at Cannoness’s unit which has been seeking refuge and converting lost souls in the Ordo Eroticus. Taking careful aim with the Deff Kannon, Peter rolls and gets a whopping 11 for the scatter… blame it on the beer. The Meks inside the Stompa, not wanting to give up any unnecessary victory points manage to once again repair it back to full scoring 5 repairs, though only needing 3. The final combat to win the game, the challenge between Mad Dok and Saint Celestine takes center stage. With all her grace and finesse the Saint swings and causes 2 wounds, but much to Obadiah’s glee and Peter’s disdain, the Dok felt no pain, saving both! Swinging back and hoping for a low roll, the Mad Dok must not have got the memo that he was supposed to throw the fight, and in return knocked the Saint’s silly head right off her shoulders.

Slay the Warlord for Sisters

Final Score: 13-12, victory for the Sisters of Battle!

Ever wonder how the Ecclesiarchy can afford all that fantastic power armour? Complete with Champaign Room and bar with Sacred Beer. 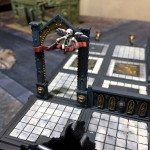 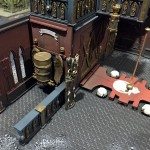 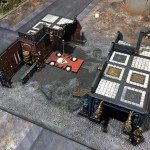