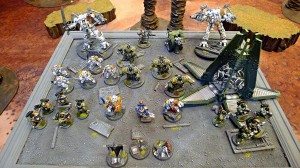 TSHFT (The Seattle Heart of Fire and Sword Tournament) is a regular event in the Seattle area and has been going strong for years now. This year was set to have a large turnout of highly competitive players and I thought it would be a great chance to test the Centuriostar for the LVO. Even with the nerf to Invisibility (and an even further nerf coming up later) I thought I had the best chance with this list as I have been playing a version of it very consistently for the past few months so I feel the most comfortable with it.

The Red Lion at Bellvue, WA was a nice choice with an adequate hall space, bar and restaurant within a few short steps and a nice table arrangement layout. Terrain was extremely light overall (and they know this and I’ve heard is something they are going to work on). They have had a history of this apparently which helped the eventual winner out a bit, but since I’m planning on taking this to LVO, I wasn’t too focused on designing something for this tournament (not that I’m saying AP did), but rather to test out my list and see if I can make it work.

I don’t consider myself the best player in the world, but feel I am above average overall. I would love to play more tournaments, but alas I run some of the larger ones right now as the TO of the Guardian Cup in Portland, OR and travelling can be difficult with a wife and two kids. I really want a strong list that isn’t Eldar or Tau so I went with the Centurions and Grey Knigts as I already have a lot of these models and has proven to be a finesse list which I like.

Small list, but lots of killing output. For those that don’t know, Loth chooses three powers from Biomancy, Telepathy, or Telekinesis. So Loth generally chooses Invisibility and whatever else sounds good in the circumstance. The Librarian rolls everything on prescience hoping for Perfect Timing and guaranteeing Prescience. Draigo comes with Gate of Infinity. All these three go with the Centurions so the unit is guaranteed Invisibility, Prescience, and Gate to work with, hoping for Perfect Timing as well. The Dreadknights run as bodyguards and seek out small squads they can punk in one turn. Everything else goes for Maelstrom objectives and tries not to die in the end. 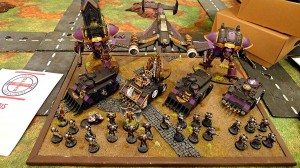 First off the bat, I see one of the things I’ve been fearing, the Errant Knight. Large blast melta can be bad news for the Centurions, especially if he can get the right angle and force saves on the support models. There was also a Knight Paladin, Exorcist, Avenger, 1 or 2 Dominions 1 or 2 Battle Sister Squads, a Seraphim Squad, and Celestine.

I won the turn to go first and took it, hoping to take out the Errant Knight before it could impact me. That first round was…very epic to say the least for me and very poor to say the least for Aaron. I took out the Errant Knight with the volley from my gated Centurions in one go – 7 6’s and he failed most of them to grant me first blood and one of the things that could really hurt the star. Then I got lucky with the knights and took out the Exorcist too. His turn one the other Knight shot twice and missed both times, tried to assault some Tacticals and rolled double 1’s…you get the idea. I took out the other Knight a bit later but started to have some trouble with the MSU style of his list (something I have to watch out for in the future) but was able to stop him from taking my objective and when Celestine died in overwatch to the Dreadknight on his Emperor’s Will objective, it was pretty much over. 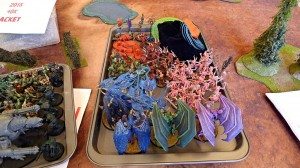 Jeremy had me beat on Psychic dice. His base 17 to my 11. We were also very close on total Kill points so this was going to be interesting. He was running Belakor, Fateweaver, Tzeentch Daemon Prince, 2 Pink Horror Squads 1 Screamer Squad, a CSM Tzeentch Prince, and some cultists.

I went first and got the Master of Ambush trait so only deployed the Thunderfire cannon. He screened pretty well and I was only able to get to Belakor which I went for, but forgot about him being naturally shrouded. My first turn ended up pretty lackluster as after dumping some shots into belakor, went after the horror screen and got them down to 2 models. He flew up and started circling the star, throwing spells at the star and trying to take down my tacs holding an objective in the middle of the board. It went back and forth and then I was able to stop Belakor from getting shrouding and the next turn took out the Grimoired Prince. I jumped the dreadknights to take out his backfield warp chargers (Horrors), then shunted and gated over to take out the screamers as he went after my backfield with his circus. His other armord prince finally fell in the end to my star and in a last ditch effort to tie the primary Fateweaver came on his board edge after flying off and proceeded to wipe up my 5 man terminator squad! In the end we tied on the primary, I had the secondary and first blood, and he had linebreaker. It was such a close game and I think the biggest mistake is that he should have been vector striking my star the whole time.

I’ve know Justin for a bit as he’s from the Corvallis area and has come up for the Guardian Cup many times. He brought a Come the Apocalypse list with a Mantle of the Laughing God Farseer, 2 Dire Avenger Wave Serpents, 1 Fire Dragons Wave Serpent, 1 Wraithknight, 1-2 Hornets, Necron Overlord on Barge, and 2 Warriors with Night Scythes. It looked strong and I hate Wave Serpents so lets see what we can do.

Justin went first and I only deployed my Star out of sight and the Thunderfire Cannon. His first turn he boosted up and took out my Thunderfire Cannon. My turn one I gated behind him and brought in one Dreadknight and the termies as well. I believe I took out a Hornet, immobilized a Waveserpent, and put some wounds on his Wraithknight. He flipped around and came at me, making one mistake here as he charged my Dreadknight with his wounded Wraithknight going through terrain. He lost that combat as my Dreadknight was able to take off the last couple of wounds before he got to swing.

The next few rounds were a bit hazy. The rest of our reserves failed to come in until turn four with my Dreadknights falling to fire or the lord and the lord finally falling to grav guns if I’m not mistaken. It came down to the last turn as He had the relic with 2 units on it – an immobilized wave serpent and 5 dire avengers. He was up on the primary and had first blood and linebreaker. I had slay the warlord and went for a hail mary. I left my warlord in back getting line breaker and gated up the star onto the relic. Everything had one wound left. I split fired into his two units easily killing the dire avengers and got luck  to take out the wave serpent. This pulled a tie.

So day 1 was over and I was 2 wins and a draw. Not bad for a first day and still in it to some degree.

On day 2 I got my first pairing for the day….Paul McKelvey. I have seen that name many times before, at the top of many tournament winnings. Double checked with Reece that this is whom I thought it was and got ready to give my best. 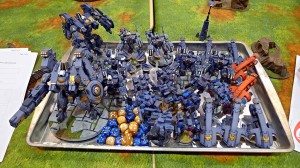 Tau Shenanigans at its Finest!

Paul runs a very unconventional list that has some backfield firers and then a bevy of highly mobile units. He runs a Firebase Cadre, Extra Ion Riptide, Commander with Positional Relay, 3 units of Tetras, and  5 units of Crisis Suits. The Commander was with one of the Missleside units and outflanked and using positional relays is able to come on just about any board edge. Each tetra shoots 1 pulse rifle and 2 markerlights, both twin linked. The other Misslesides were in an imperial bunker with the riptides in the corners of his board edge.

I made the best of it and felt I made a solid first turn choice. I had stealth ruins and put the star and thunderfire in one of the only ruins in my deployment zone, since it was bolstered it gave them a 2+ armor and 2 +cover save. His shots put a couple of wounds here and there but no major damage. Big mistake here. I get off all the powers and gate on over to shoot his riptide or two, but forget that interceptor does not impact gating units. Trying to put them into a place where his misslesides can’t see and I drift off the table and go back into reserves. They came back on next turn but I forgot to gate again. Sigh. This is when he brought on the full brunt of his reserves to go after my star and thus the next sad part for Invisibility.

Things just went downhill from there with my termies assaulting some tetras, exploding them, wounding my warlord whom had one wound left who was in another combat and failing his save……I ended with slay the warlord to Pauls 10 points. 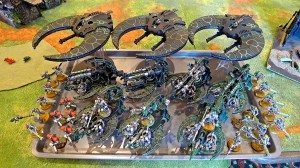 My First Competitive Love and Now My Nightmare!

Jy2! I love reading his battle reports and have followed him on Dakka and it was a treat. I thought about challenging him but just didn’t feel up to it. My mistake.

Jim took pictures and is in the process of doing a much better battle report on Dakka so I’ll let him do the details. I made some big mistakes with my Dreadknights, but the star carried me and I went for the win on one last few rolls by gating in for line breaker and killing a unit to get up on the secondary as he had every objective locked down. I took the secondary and all three tertiary to take the win.

Overall it was a good tournament. The venue and hotel rooms were nice and had quick access to food and beverage. There were some other small things that bugged me; the food at the buffet in the restaurant for lunches was pretty sub-par and there were some activities that were not open to the rest of the paying crowd so mingling didn’t happen for many of us lowly peasants as we might have liked. Other than that, the TSHFT TO’s handled the software issues well and kept things moving all weekend long which was good. I came in 13th in a pool of sharks, learned some good lessons for the LVO, and had a good time connecting with friends on the west coast.

Special thanks to Jy2 for letting me use his tournament pictures for this report.