The Lobster Bisque is to die for. 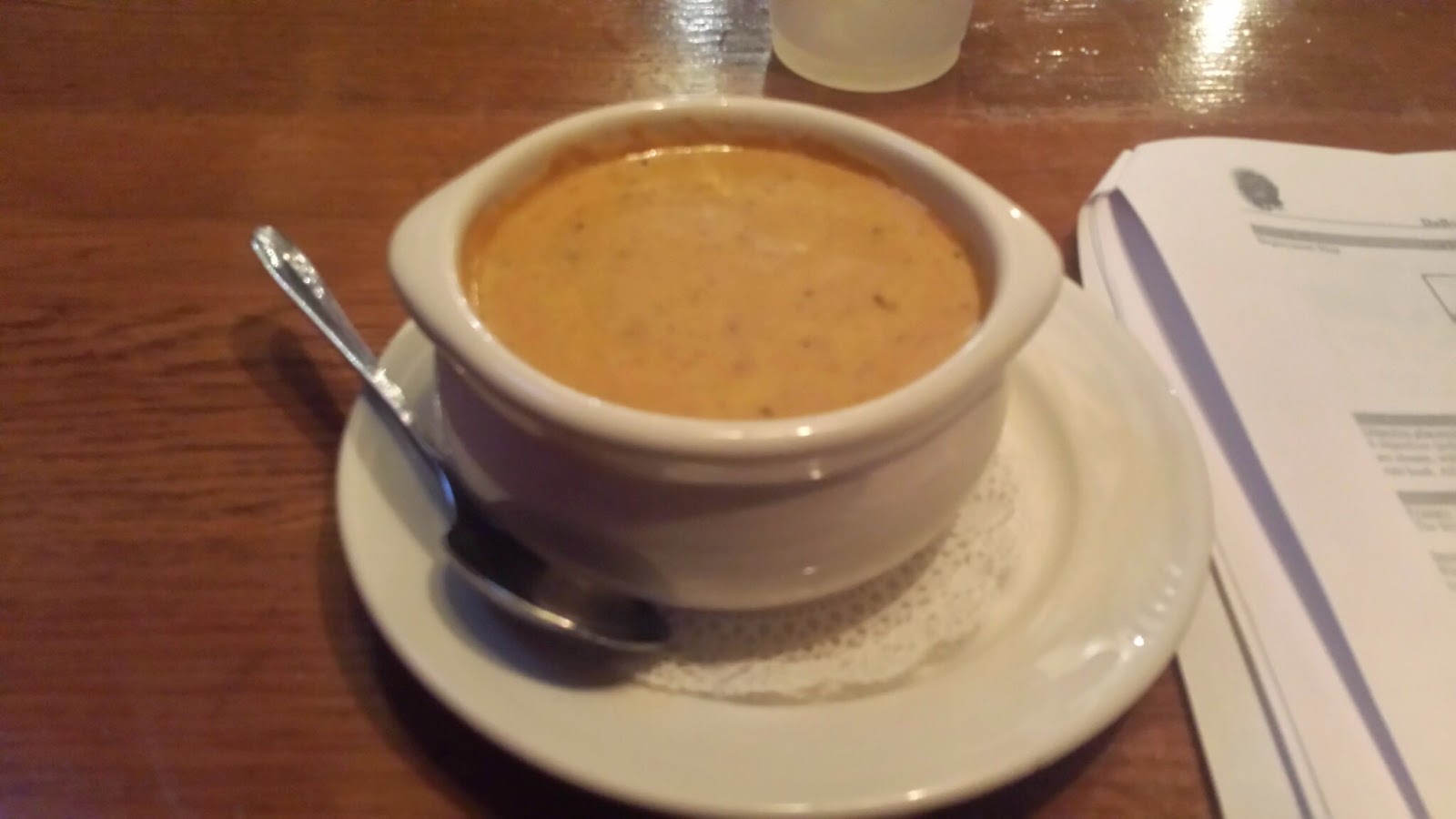 Also, I had a wonderful time at Da Boyz GT last weekend. The players were friendly, the staff was welcoming, the missions were cool, and the venue was comfortable.  I do recommend this event to anyone for both a casual and a competitive experience.

Note, however, that if you are only interested in reading winning tournament reports, you may want to skip this one because I took a serious butt whoopin.

As I mentioned in last year’s blog post, the location is quite beautiful.  Bristol Harbour Resort is set atop the ridge overlooking Canandaigua Lake in New York’s Finger Lakes region. There are no other hotels within walking distance as I understand it (particularly in November), so if you are attending, you probably want to stay at the event hotel. 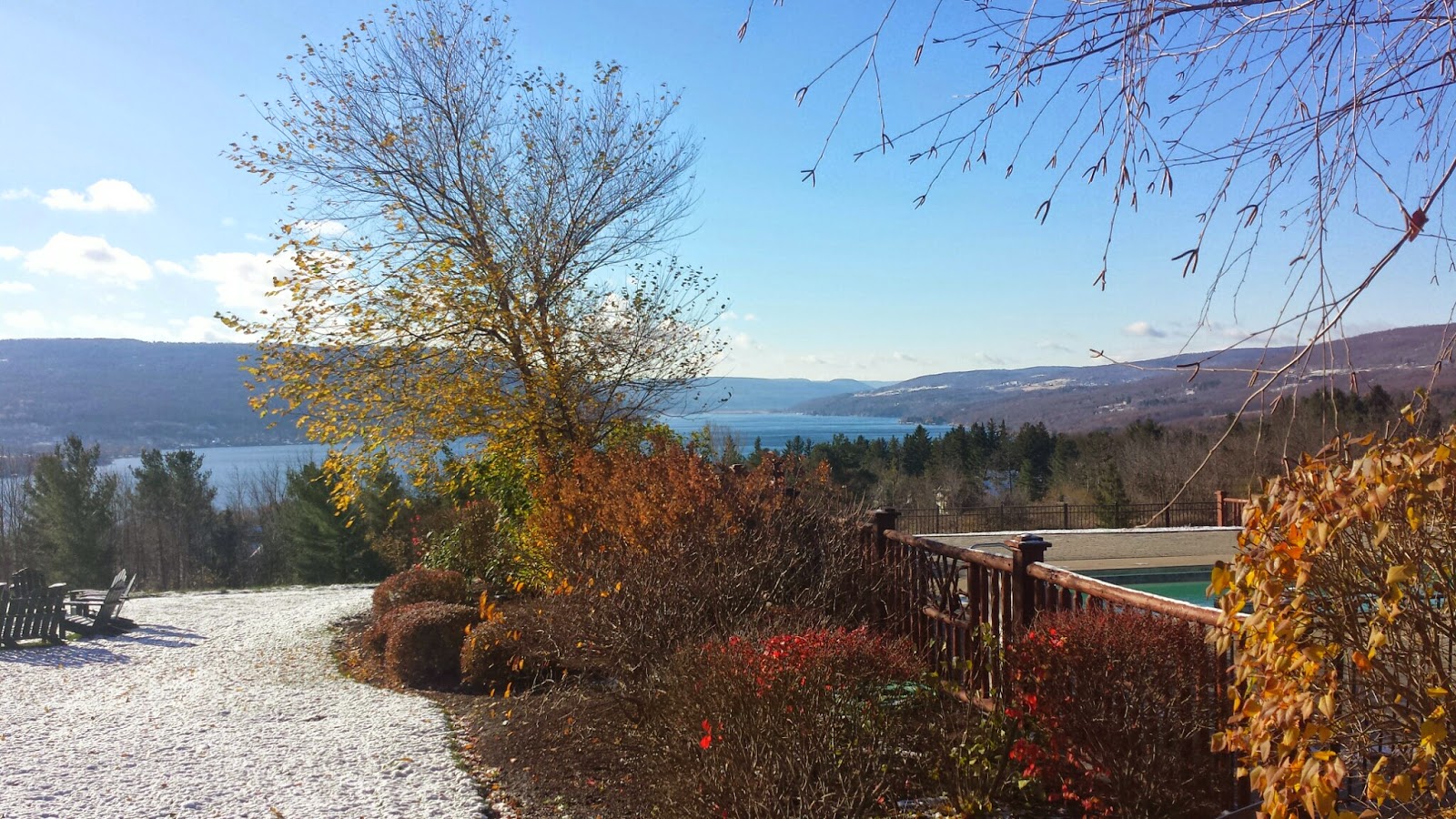 Last year we were late to register, so couldn’t get rooms at Bristol Harbour Resort, so had to stay at a hotel in Canandaigua town itself.  We saved a few bucks doing that, but had to drive to the event.  It was far more convenient this year to just  book a room at the event itself and boy, were the rooms cozy. The rooms, service, and convenience of being at Bristol Harbour are well worth the marginal cost to stay there. 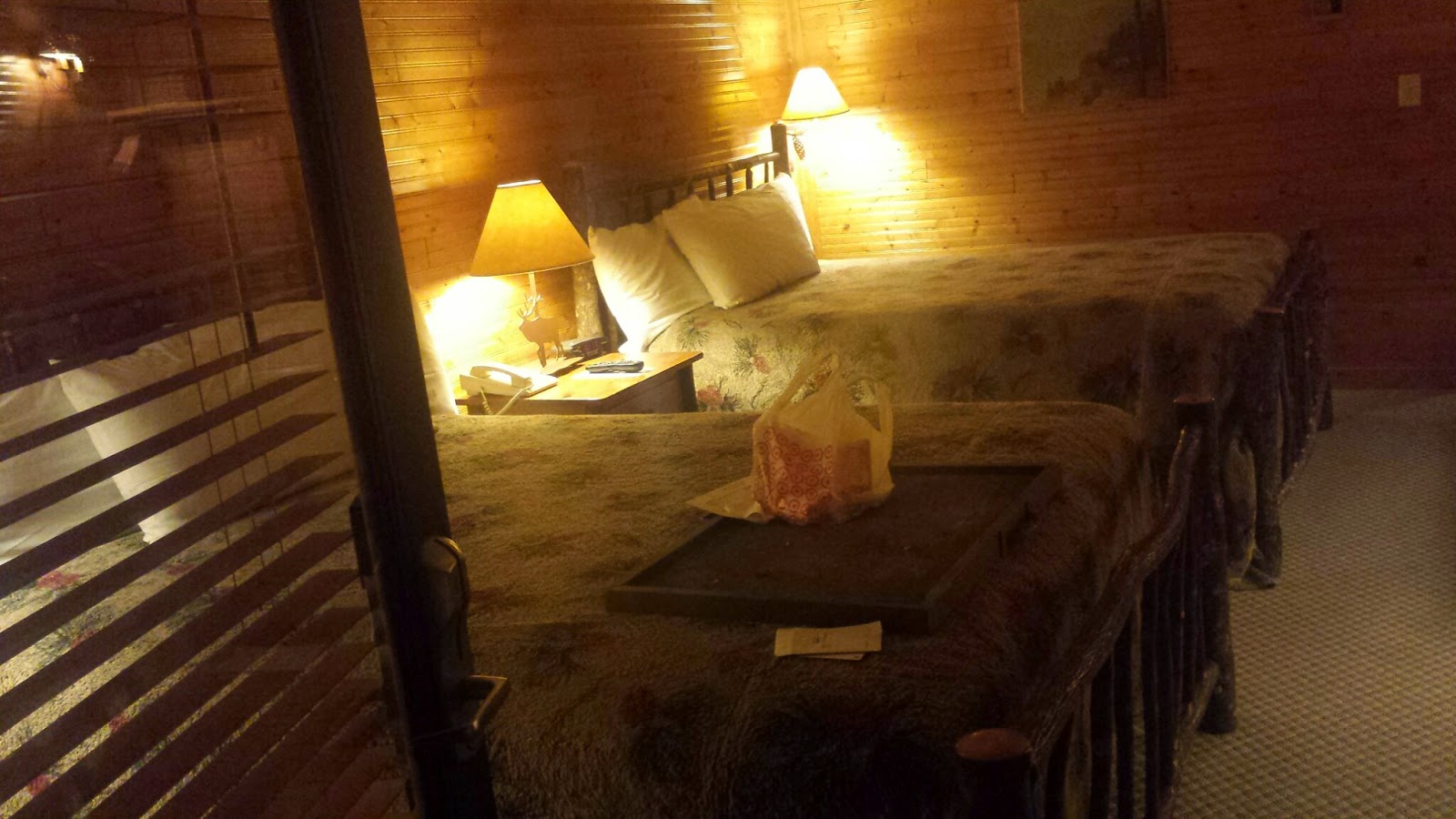 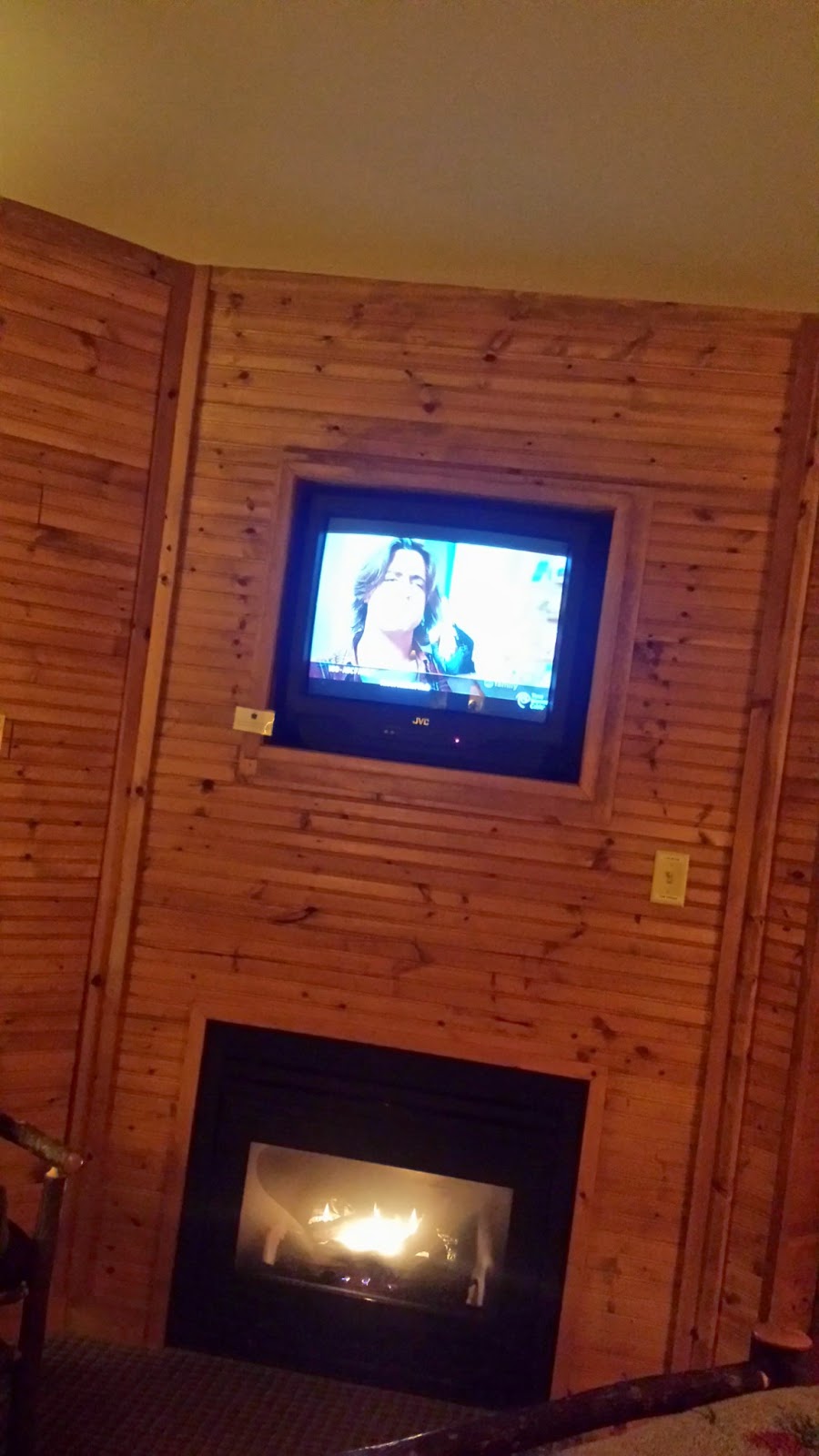 Note also that for the past two years I’ve attended, Da Boyz has provided some buffet meals during the tournament, so that helps remediate some costs.  It’s nice to be able to jump out of Game 1, grab a plate of food, eat, and get right back to it. 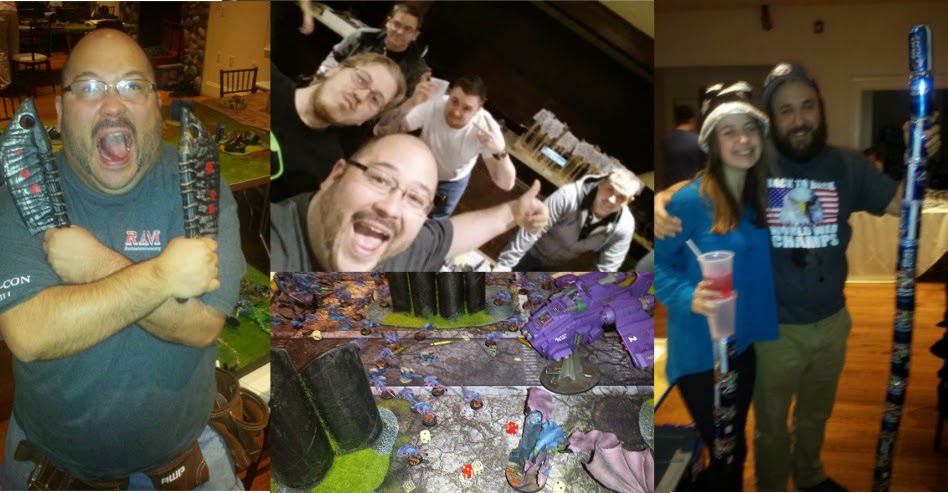 My buddy, Kevin and I decided to show up early and take part in the Team Tournament on Friday. The format is 1000 points per player in teams of two.  I took a Space Marines Legion of the Damned force and Kevin brought a mixed Sisters of Battle force.  The Team Tournamnent is a very laid-back, casual atmosphere where you make new friends over the course of three games.

I am not too sure what our standings were at the end of the evening, but I’m certain that I don’t care because the day was a win for me. I met some great folks and played some fun games. In particular, our first game versus Ben and Steve, a couple of the guys from The 13th Legion out of Buffalo, and our last game against a couple of fine Québécois, Eric and Max, from Hellfire Painting.

I may not have been sober that day.

So, as I’ve been going on about for months, I did decide to bring my bike list to the tournament instead of the Green Tide formation.  I knew that this was the least competitive of the two lists, but it was also the most manageable in a tournament environment.  Here it is again in case you haven’t seen it. 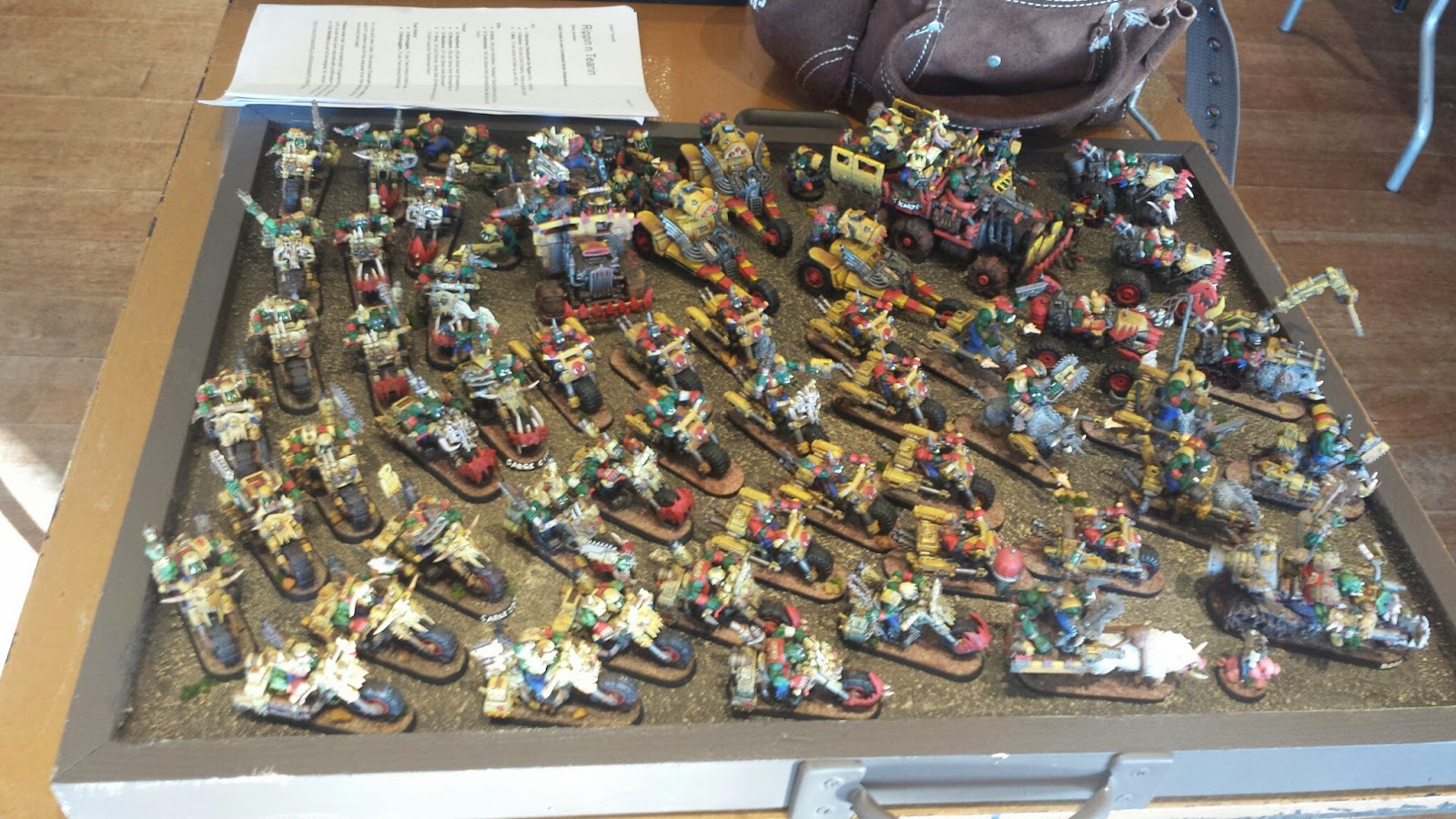 The idea was to put a lot of pressure on my opponents to make bad target priority decisions and get the heck into close combat as quickly as possible.  In actuality, this worked rather well.  I’ll break down the list strengths and weaknesses later.

At Da Boyz, they used the following method for game setup:

This was surprising to me as most groups I know use the 6th edition method of whoever deploys first goes first.  I have no real commentary on it at this time, but I did find it interesting.  Sound off in the comments if  you have any experience with this in your local area.

Every game included Night Fighting, Mysterious Objectives, Reserves and Seize the Initiative. These are clearly the industry standard at this point.

When you Table your opponent, you don’t stop the game. Instead, you continue playing the game yourself until the final natural turn.  If you’re badly out of position, you may not actually score full points.  I think this is a neat way to do it and, while it probably does mean you will win with full points, it’s not necessarily so.  If you’re playing a progressive mission and camp in a corner the whole game with your mobile, shooty army, you will probably lose whether you table your opponent or not. I like that.

All games had to run at least 4 turns in order to score any Battle Points. This seems to be a fairly serviceable way to adjudicate time.  All of my games went to at least turn 5, so I didn’t see a problem all weekend. 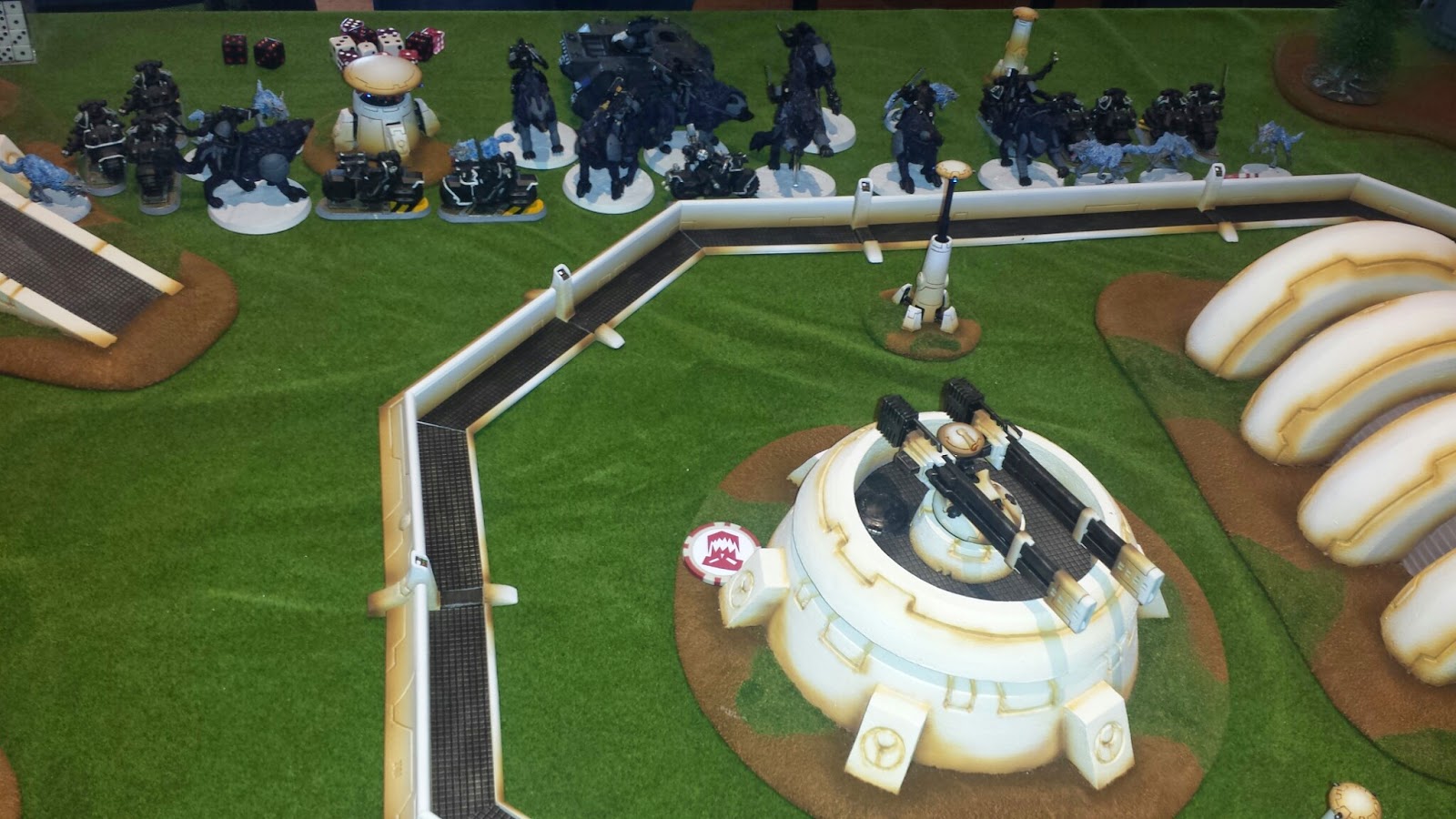 Primary Mission (20pts):  The Relic (could not be picked up until turn 2) 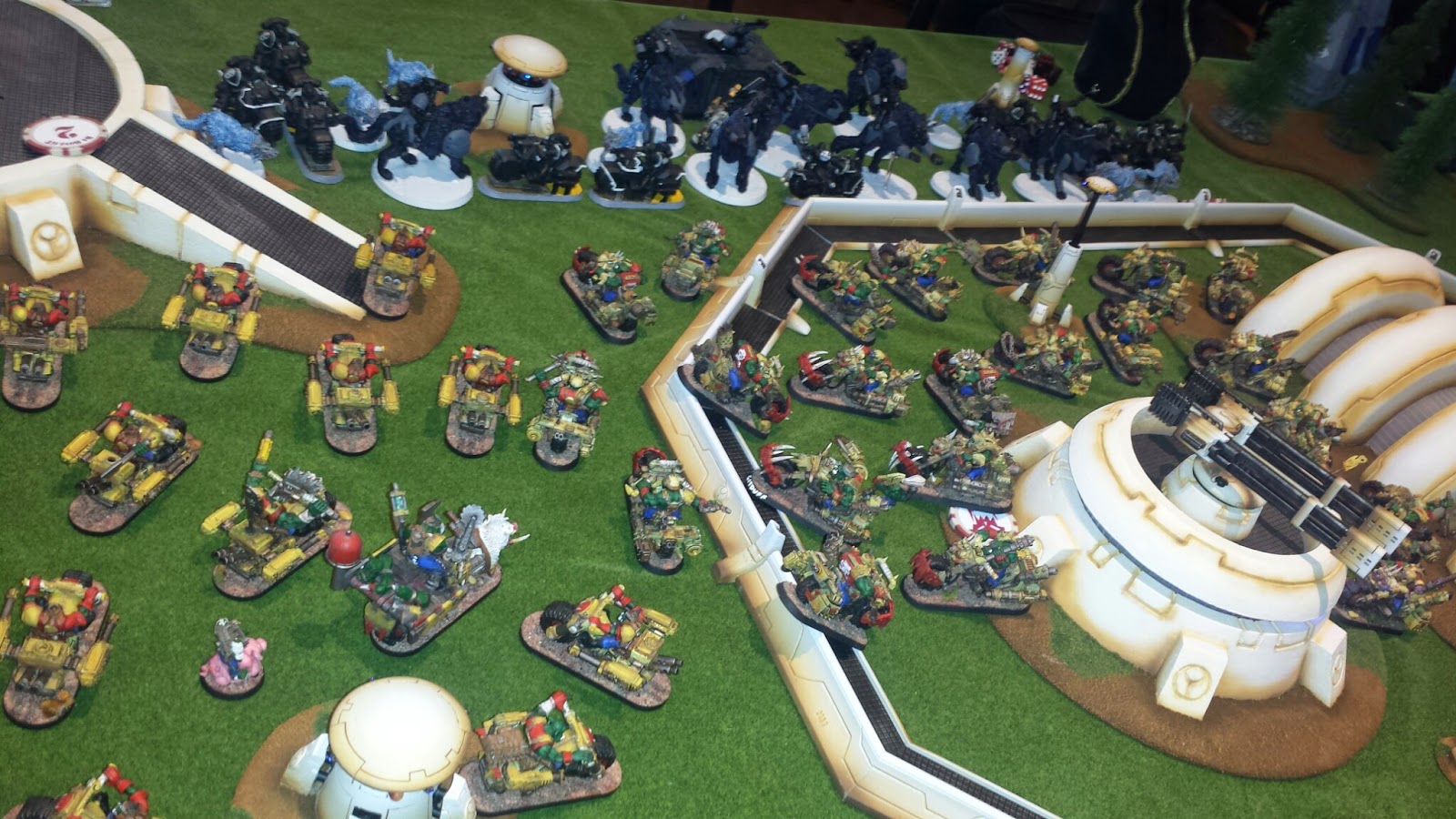 I very grievously misjudged the opposing list in this game.  I was so rigidly set in my standard operating procedure that I failed to judge the list’s specific abilities.  My opponent’s list had, in truth, very little shooting that I should not have been overly concerned about it, but I zoomed forward 24″ anyways as if I were facing Tau and not Space Marines.  What I should have done was group up on a flank and swoop in, shooting at the enemy, softening it up before the inevitable assault.  Of course, I wasn’t too concerned one way or the other which of us did the assaulting as Space Wolves get Counter-Attack.  However, I could have set up a few units for a counter-assault after he descended upon me.  I didn’t do that, though. Instead I rocketed forward and got into assault very quickly. 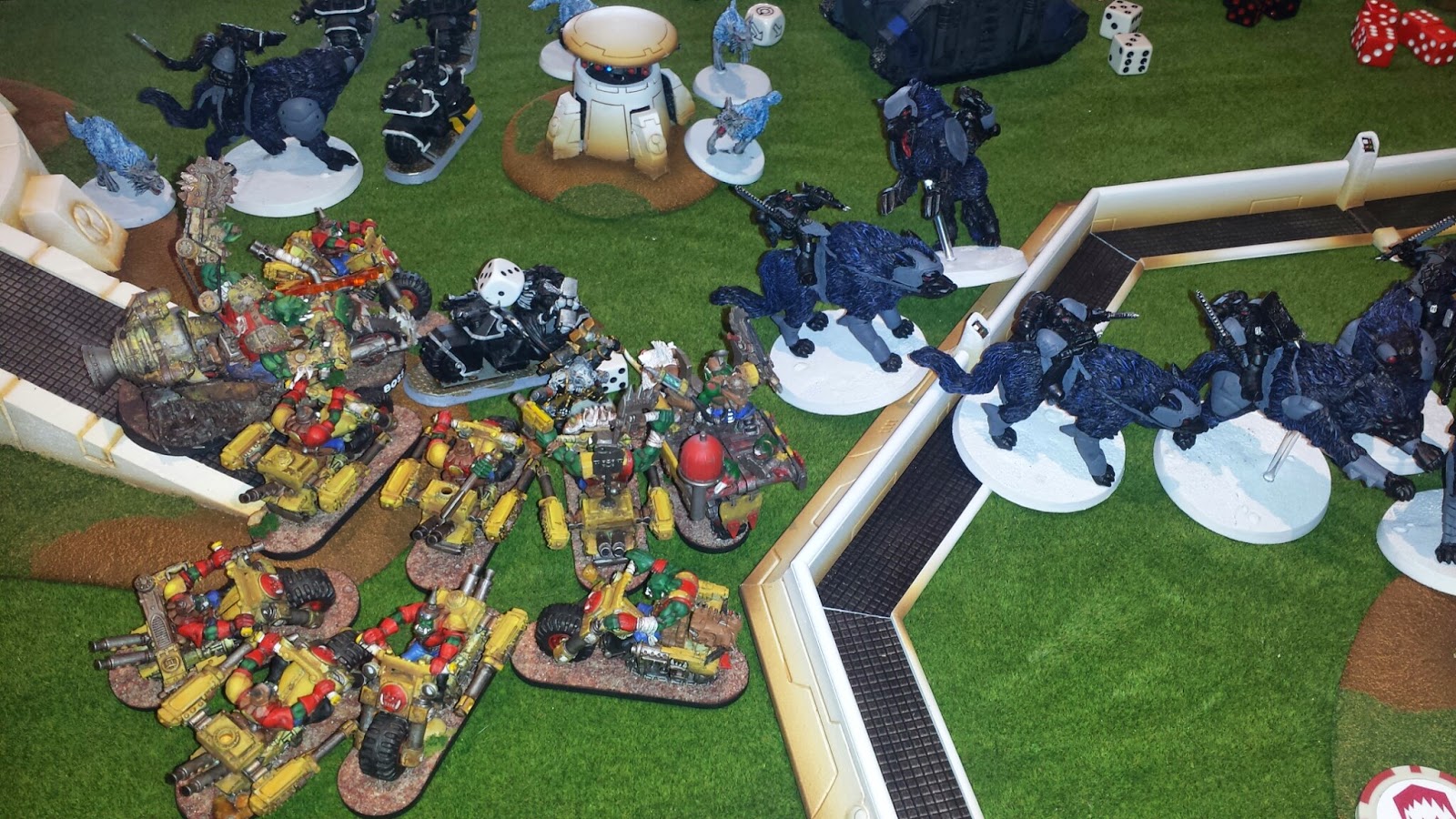 This failure at judgement was compounded by three factors:

I was still able to make an impression on his model count throughout the game, pressing against his Centurions with my Boyz squad and getting some final vengeance upon an Iron Priest holding The Relic with my Tankbustas and Nobz (which were mutually erased by that damned Strength 10 Servo-Arm). 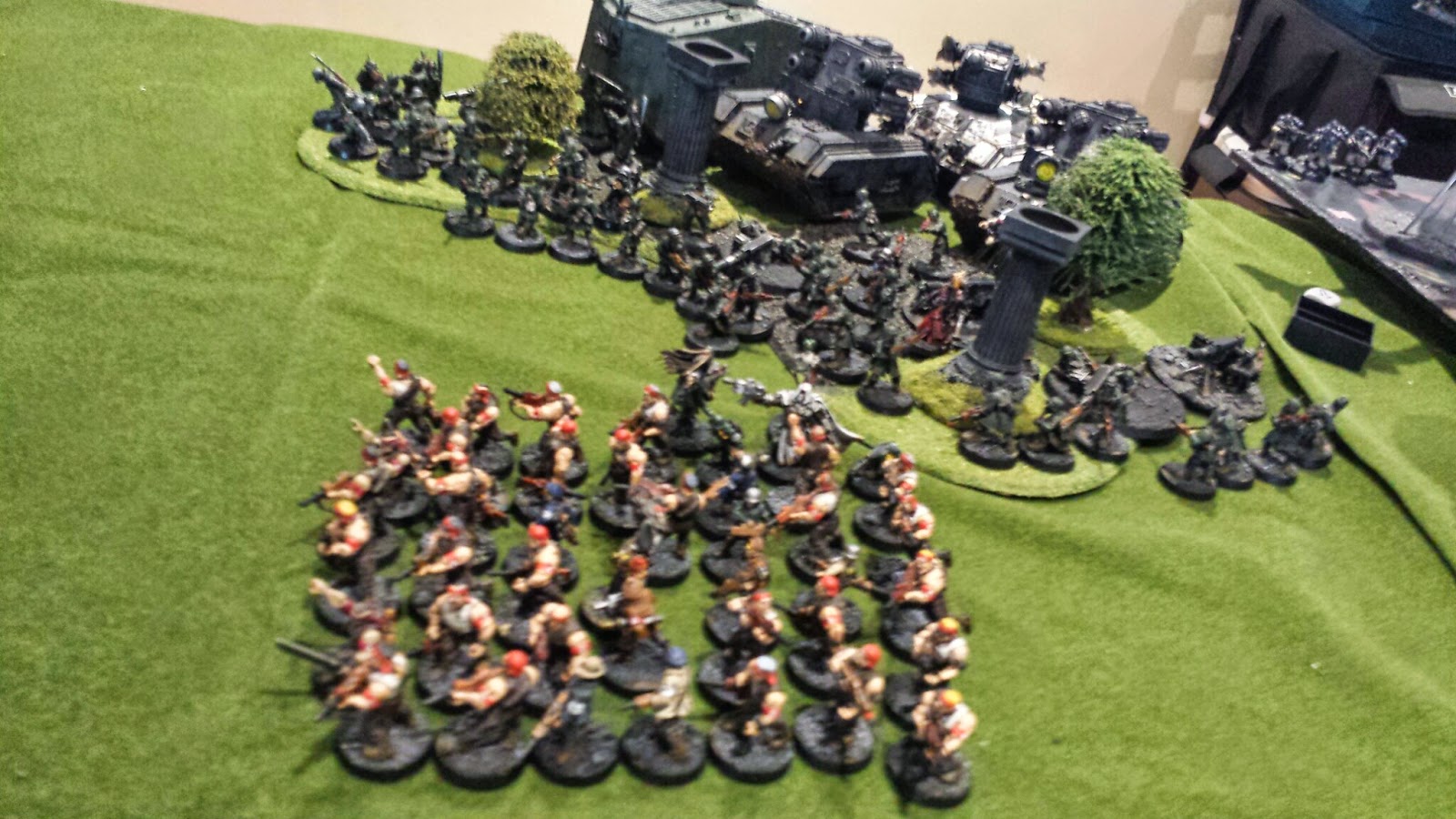 Primary Mission (20pts):  Modified Capture and Control where there was one Objective placed in each table half and, when killed, each Warlord became an Objective.

As my opponent, Rob, predicted, this was an old-school 5th edition-style Orks vs. IG romp-fest.  I raced across the board as fast as I could and engaged with the blob squad.  I left my Trukks and buggies in reserve to protect them from the Lascannons on turn 1.  I did not outflank the buggies, remembering how the old Spear Head used to leave IG very close to the friendly board edge.

I was actually very happy with how my list was able to weather the withering fire of the blob squad and Wyverns in order to slam into CC.  Ork Bikes (particularly with a Painboy) are very good for this.  Note, of course, that I did everything I could to make all of the Servo Skulls disappear off the board on Turn 1 to avoid more accurate blasts. 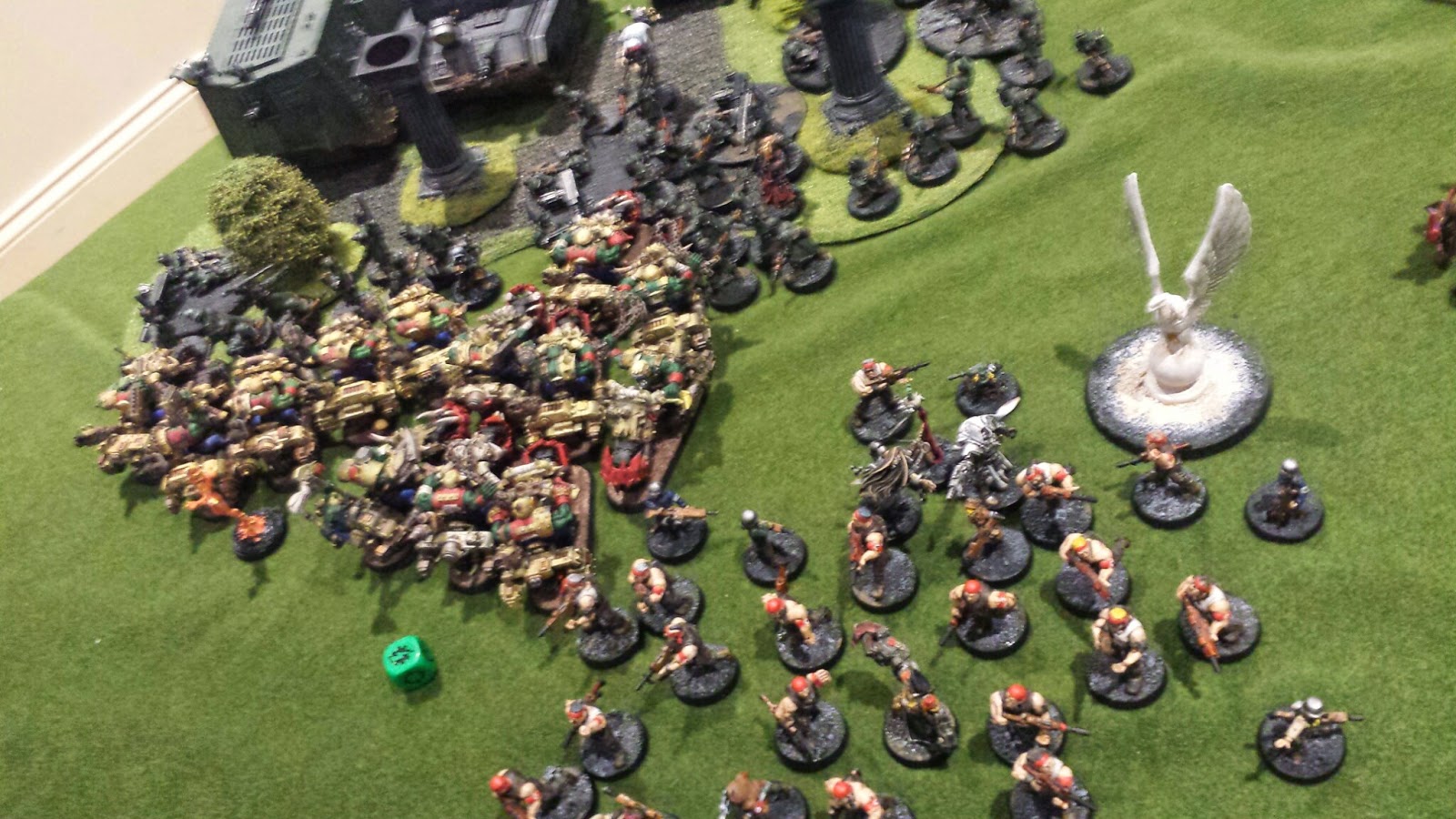 I was also able to penetrate deep into the back lines with my Tankbustas to take out the Wyverns and Manticore, even with the Heavy Flamers on the Chimera (which are a GREAT choice, in my opinion, on those models).   With so many bikes putting pressure on the gun line, I began to see how the Tankbustas, as flimsy as they are in their Trukk, can be well-protected by that threat. 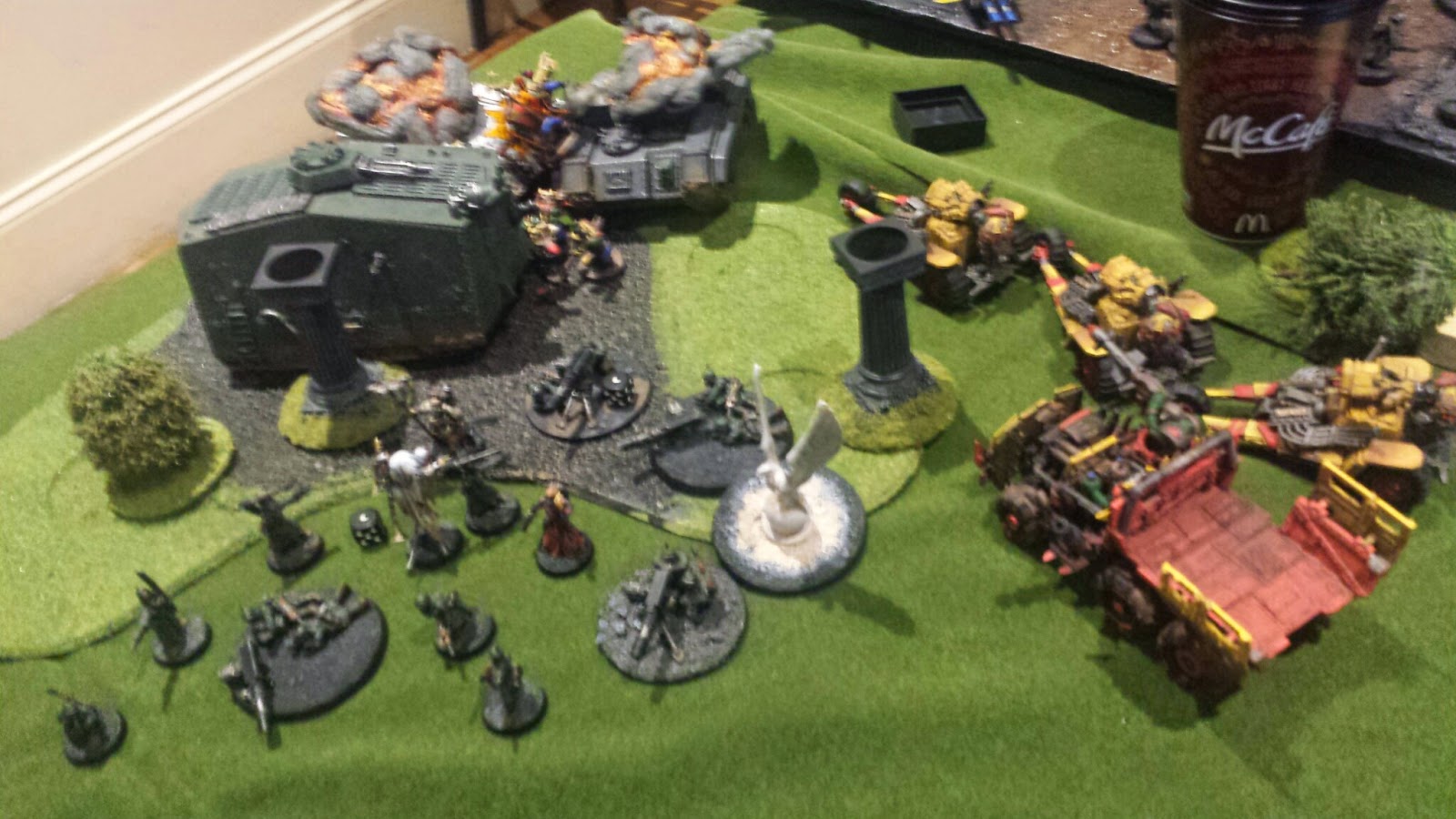 Yarrick with the Inquisitor and Psyker in the Conscript squad was a really neat unit which created a great deal of threat that I had to try to avoid.  Just the same, they were able to assault and kill my Nob Bikerz after I failed my own assault. Of course, I think this was due to the fact that they were enraged that I’d killed several children in that Conscript unit! 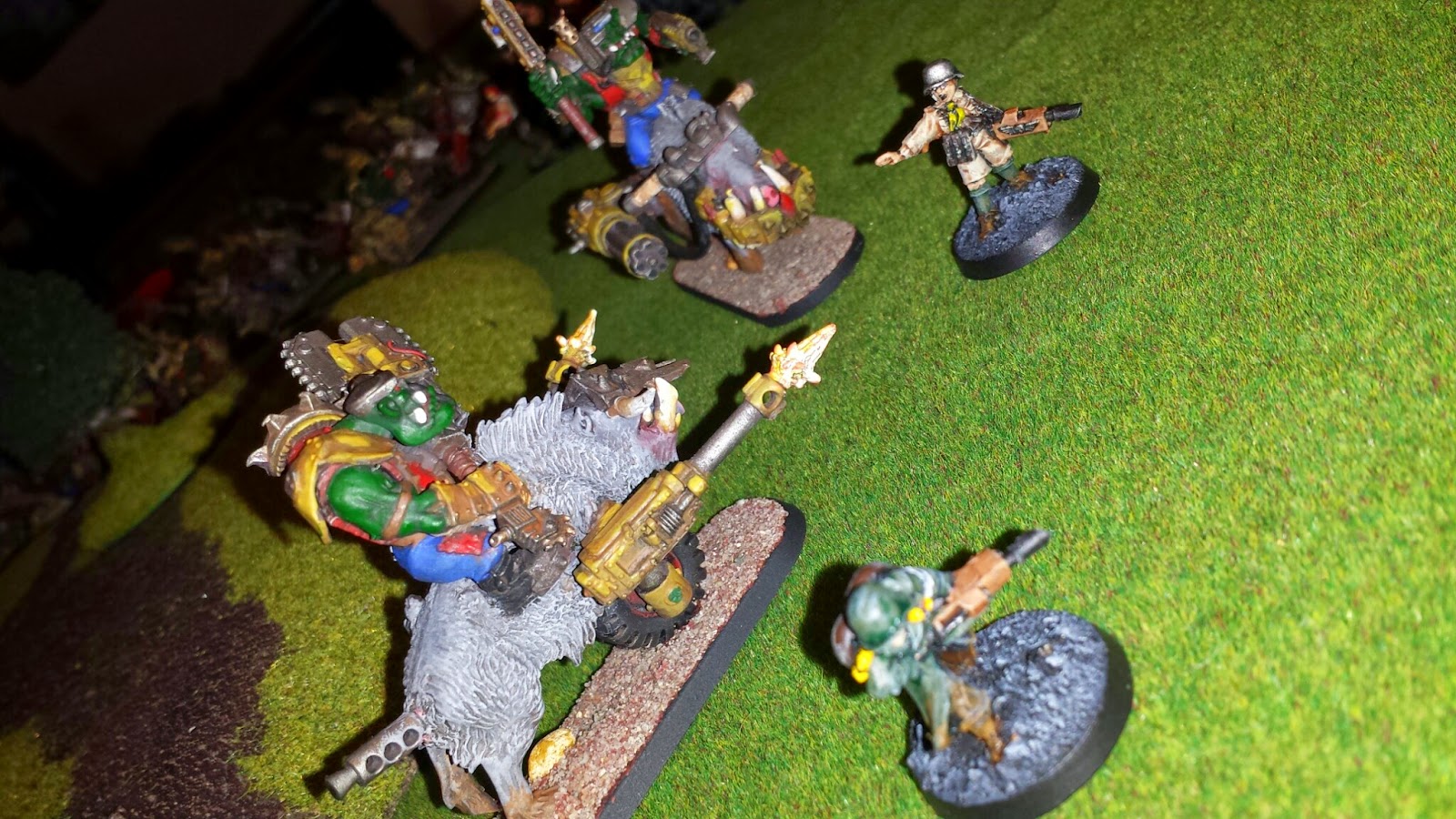 At the end of the game, I’d gambled my Warlord’s safety to score some victory points.  Rob finally was able disentangle his Blob Squad from my Orks and was able to remove Zhagsnark’s cover save and bring him down with Lascannons, thus creating the Objective he needed to tie the Primary Mission and win the game on the Secondary! 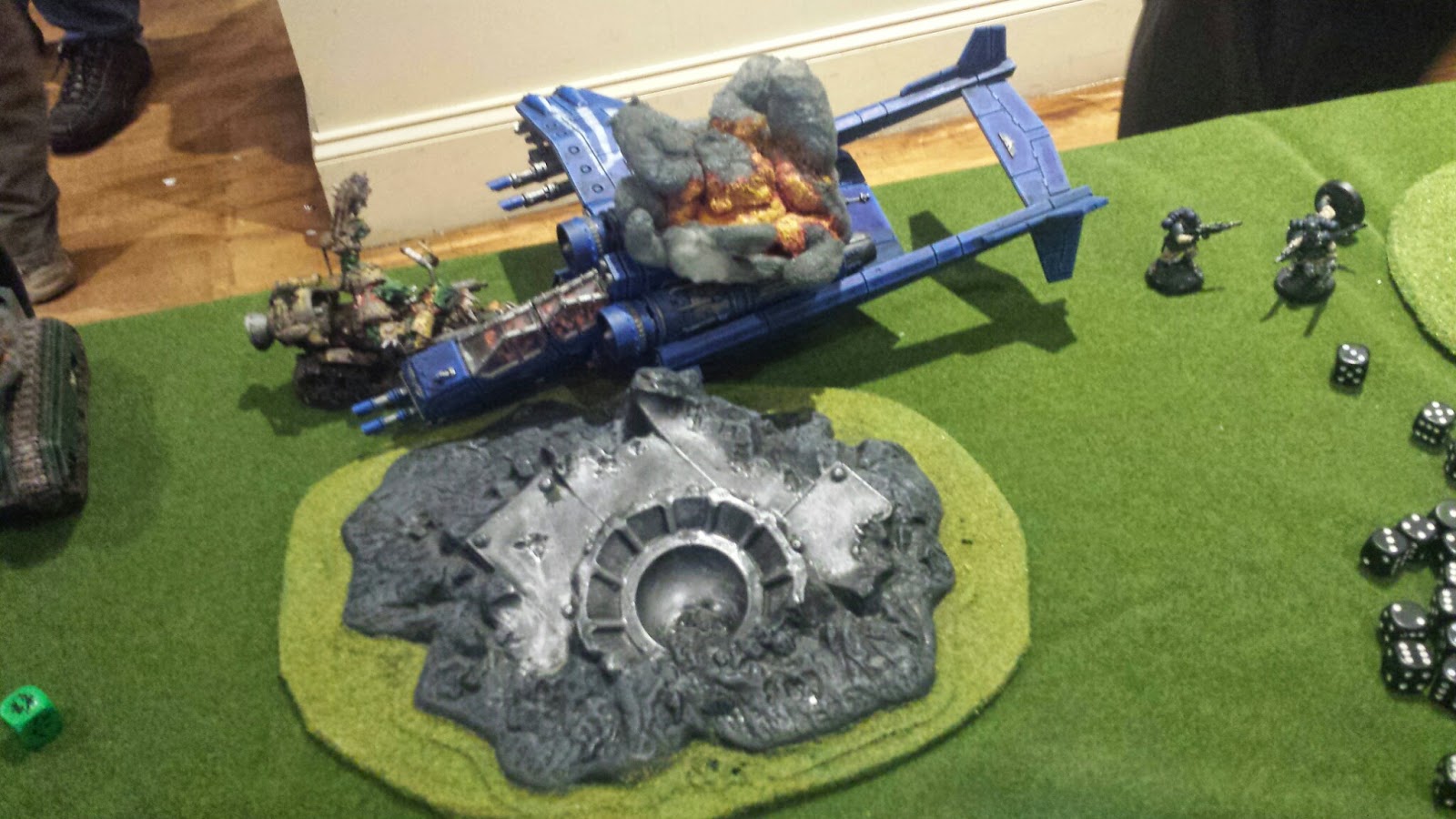 I want to thank my opponent, Rob, for playing a really fun and challenging game.  We had a great time tearing each other to pieces.  I hope to face him again someday. 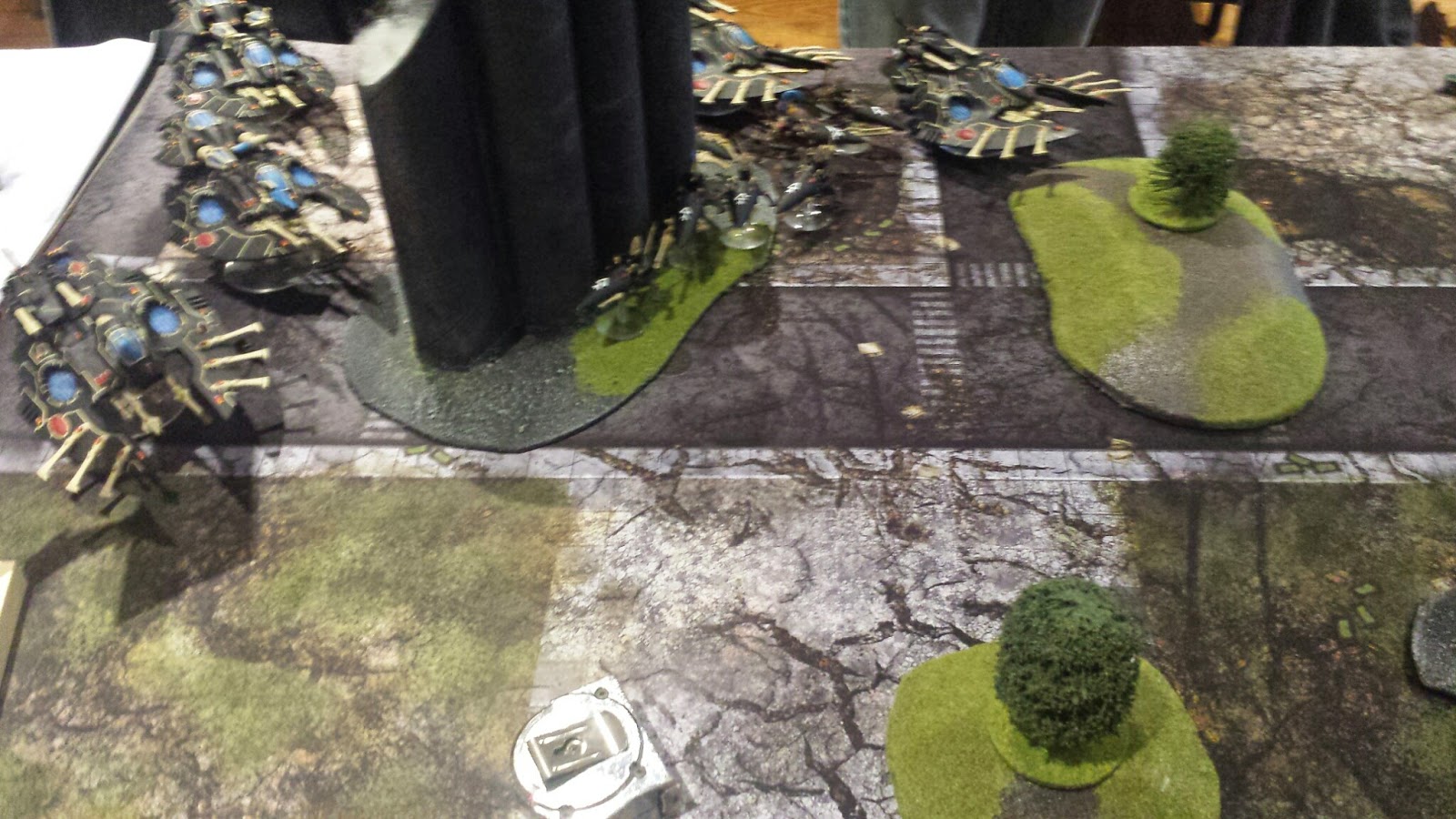 Primary Mission (20pts):  Old Victory Points with any duplicated unit doubled in points (except troops choices which were not dedicated transports)

Secondary Mission (10pts):  3 Objectives (one in the center)

Jason saw my bike list and lamented he’d been seeing bikes all day and was “looking forward” to facing the Ork variety.  He castled up in his corner behind some pipe towers and prepared to shoot at me during my advance.  Again, as I ought to do against these gun lines, I charged forward as fast as I could with my bikes down the center and my Tankbustas bringing up the right flank. I left the Boyz in the Trukk in my back lines in order to draw attention from the deepstriking units.  This certainly did work, however I never recovered that territory. 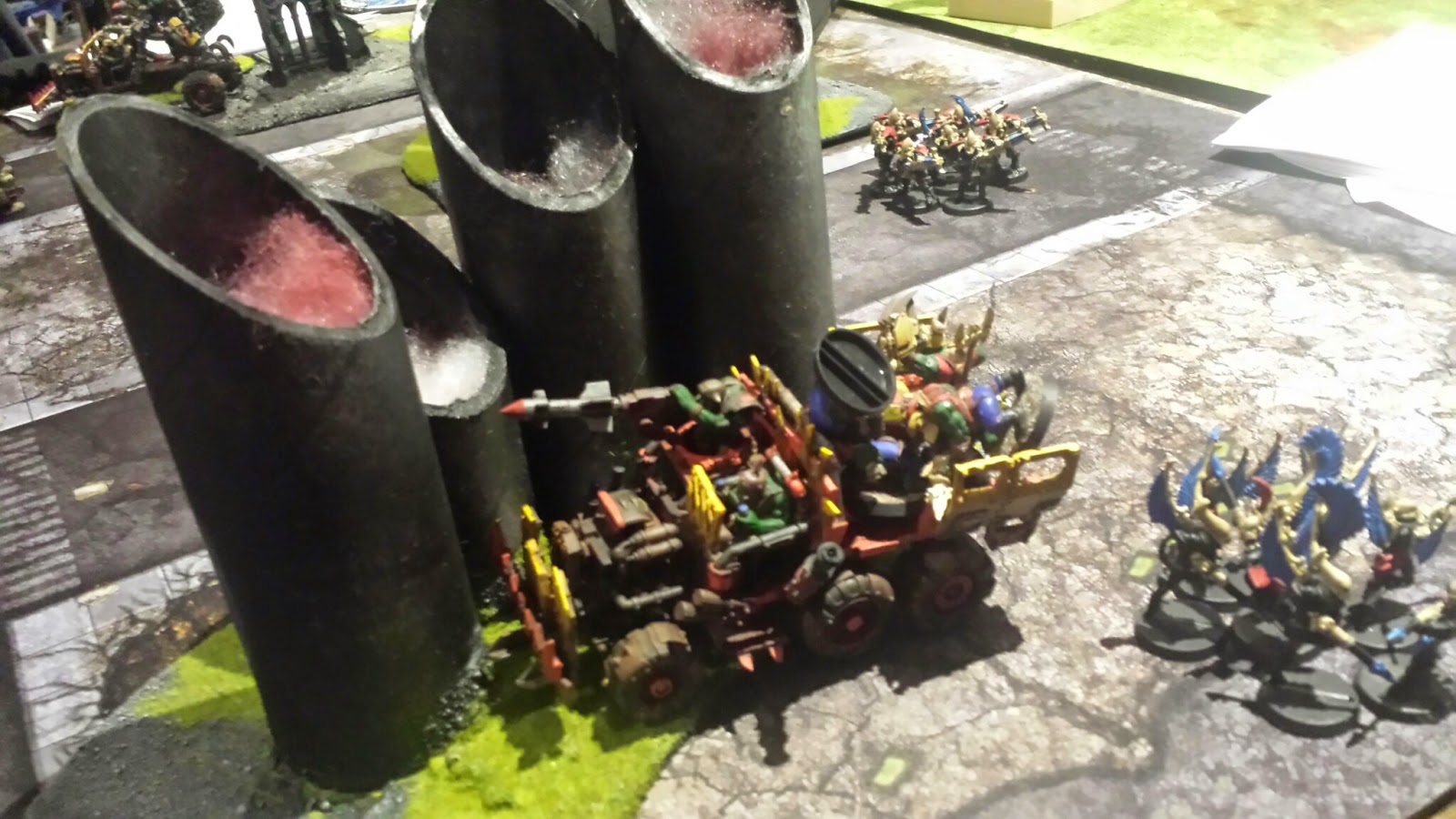 As can be expected, I took very heavy casualties on the approach, but I was able to make it into Jason’s lines with my bike squads.  Unfortunately, the Nobz failed a Leadership check after losing two casualties and never recovered the entire game. 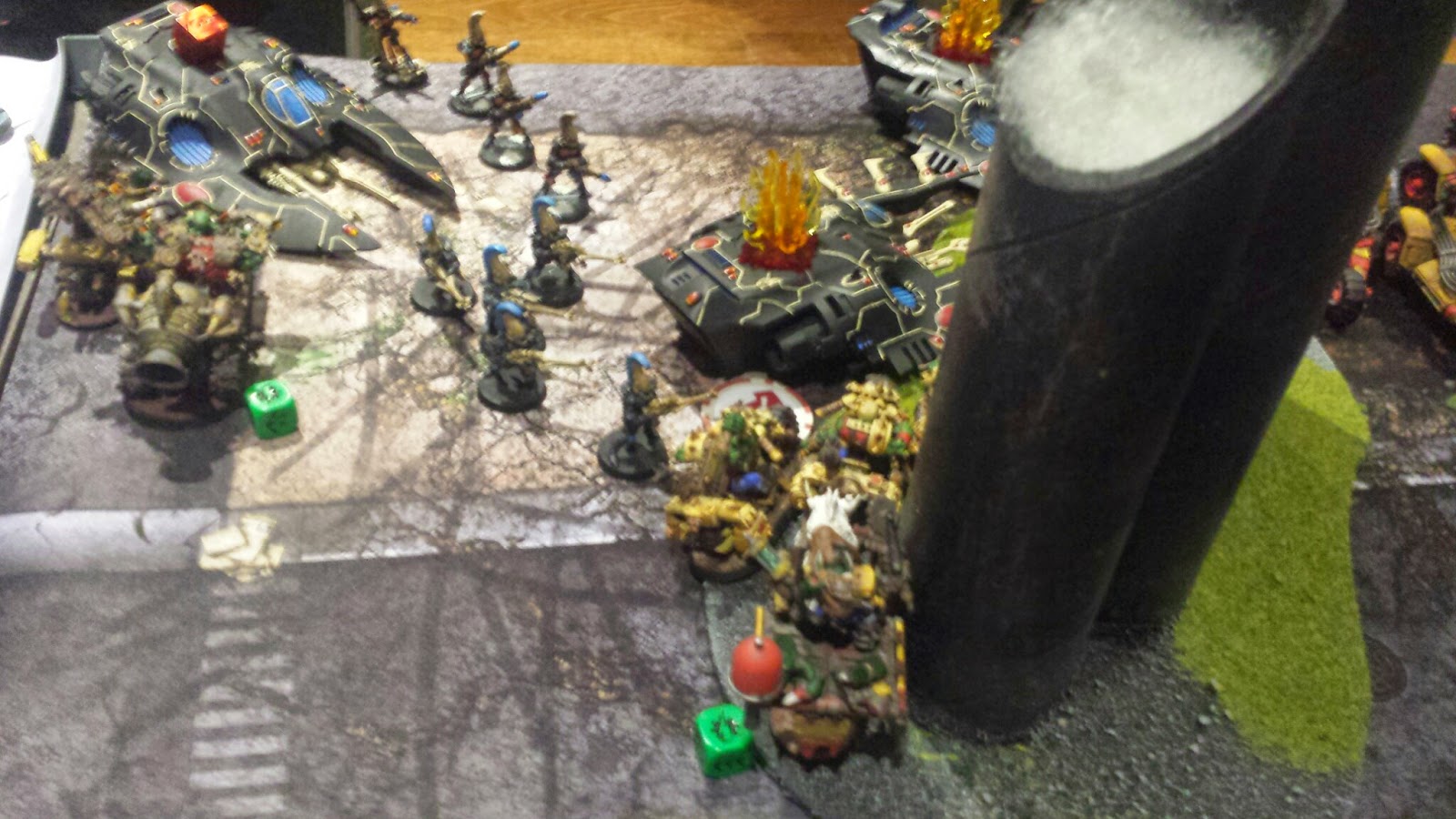 The Tankbustas remained mainly unscathed thanks to the danger presented by the bikes and were able to assault a turbo-boosting Fire Prism which had attempted to escape the press. 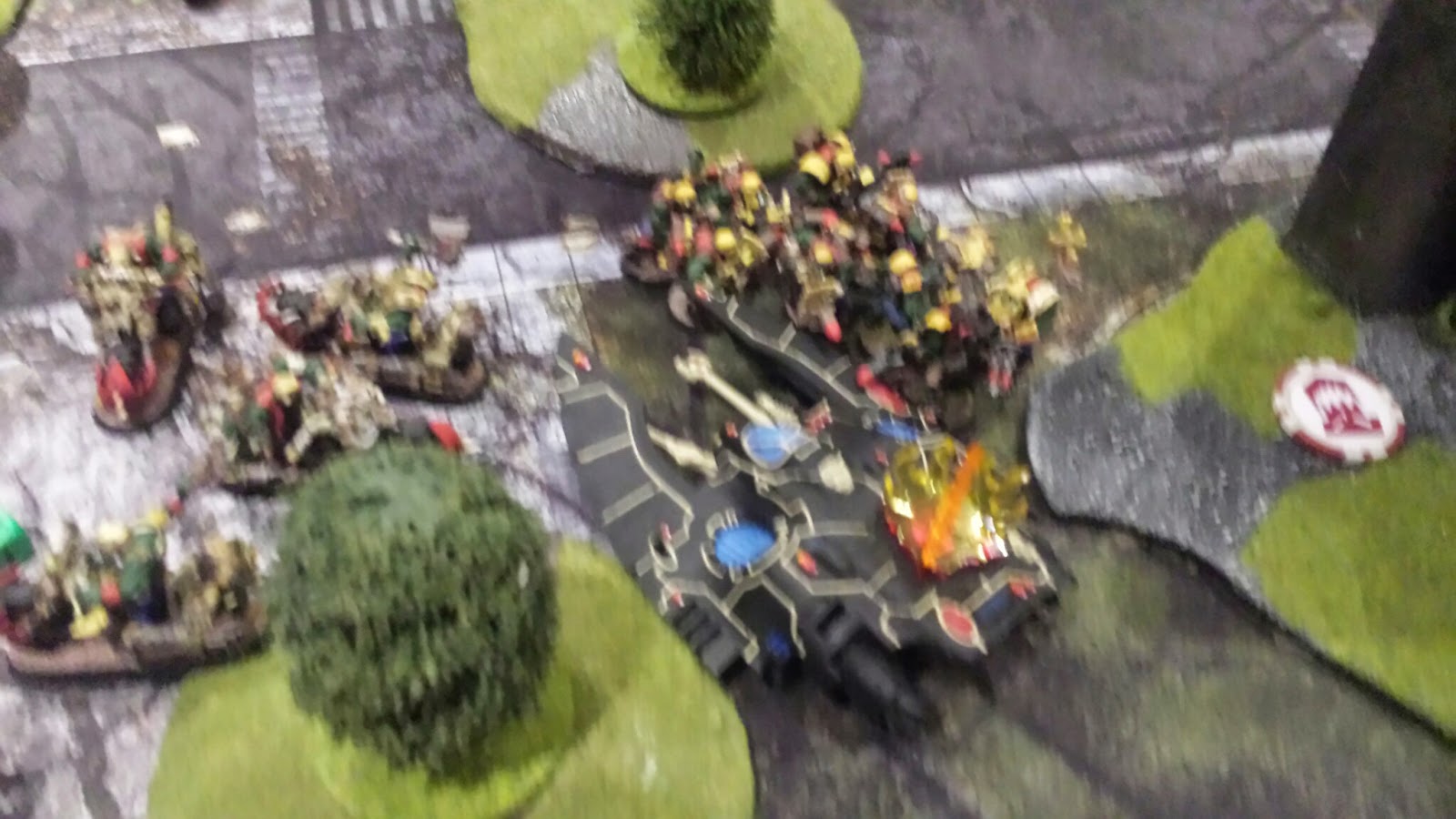 For me, Game 3 was another satisfying game where Jason and I pushed models around the table and messed each other up real bad.  It was a lot of fun and I thought Jason did a great job holding the Orks off even though he, like me, refused to bring a fully tooled-up list to the tourney for personal reasons.  Kudos to you, Jason, and thanks for a great game.

Again, the bikes really did their job, but my support units were too flimsy to hold up their end of the bargain and allowed Jason to take the Secondary Mission.

Stay tuned for another installment later today.  Also, I plan on doing a third article on some of the anti-spam mission elements Da Boyz used which I found both intriguing and inspired.

Before I sign off, here’s some more pics of the wonderful terrain tables at Da Boyz GT which are contributed by several game groups. 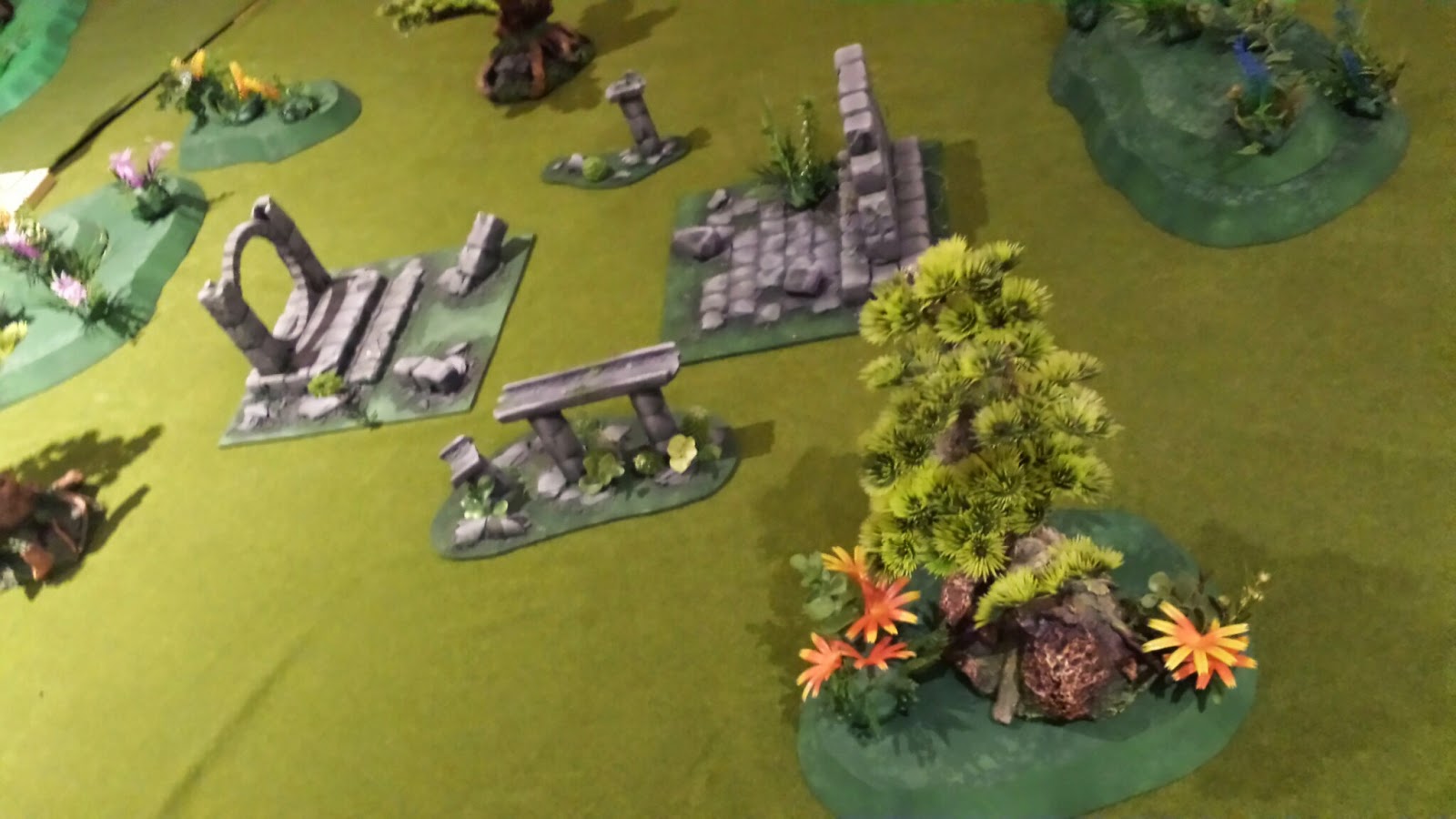 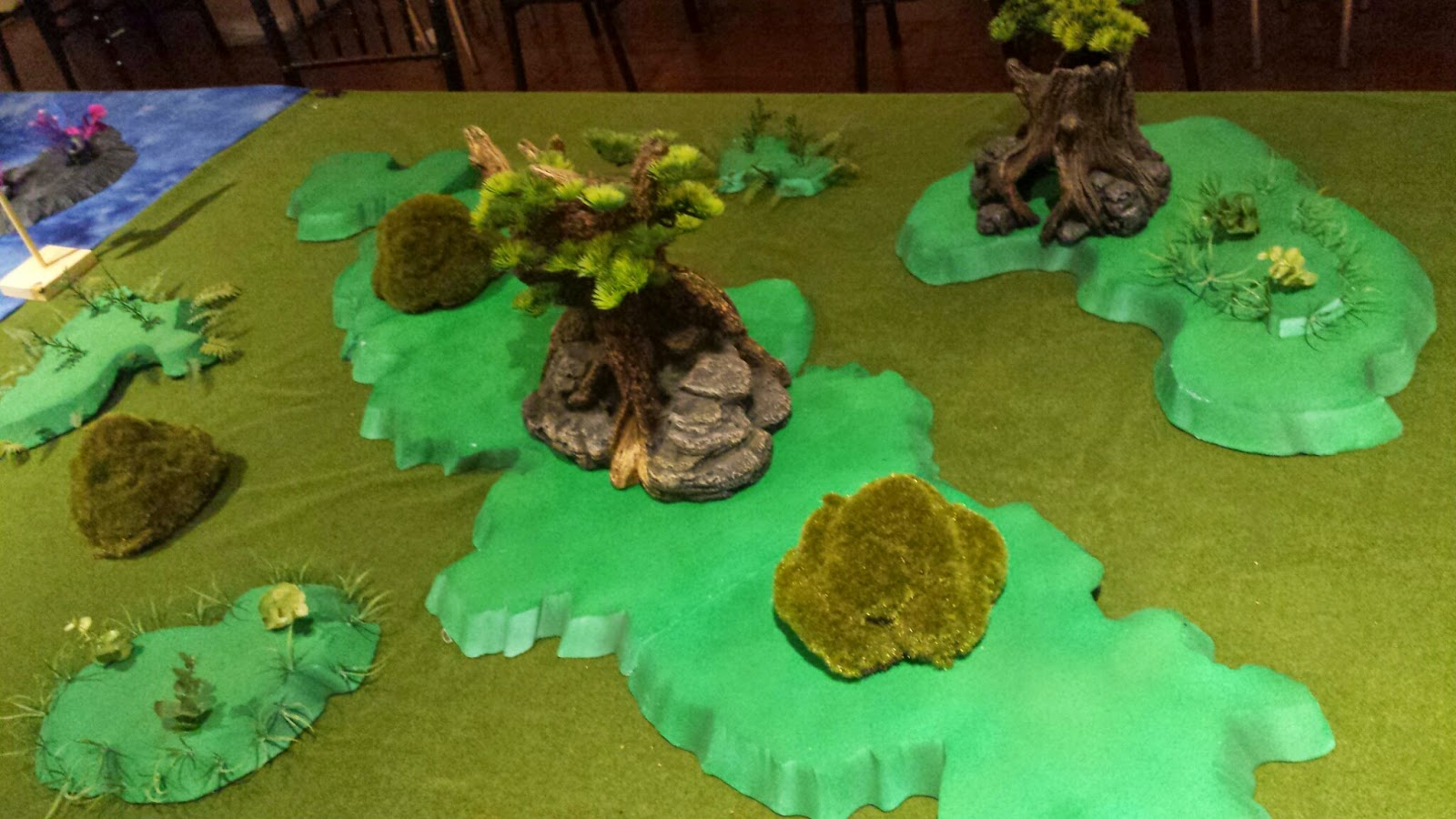 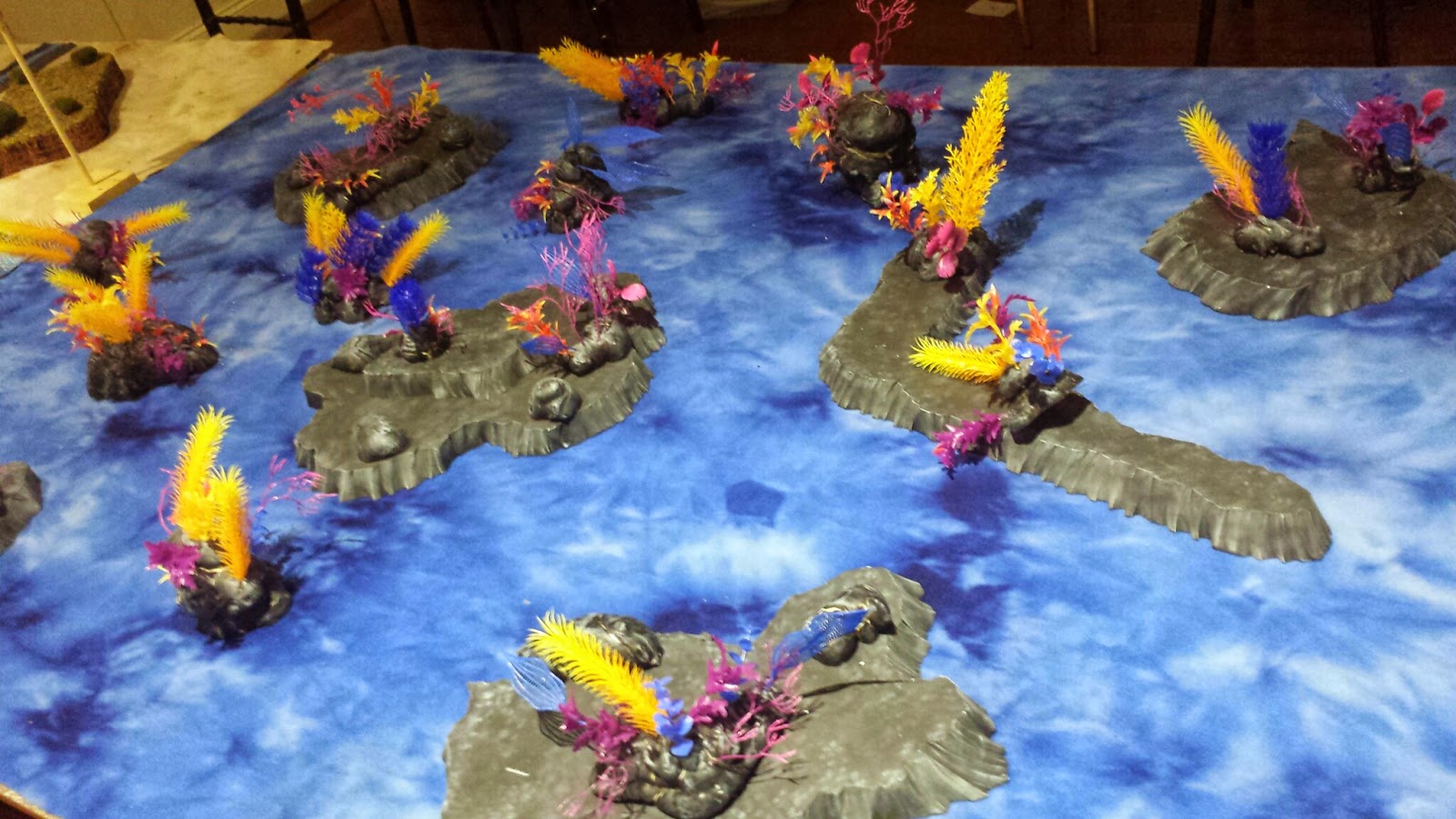 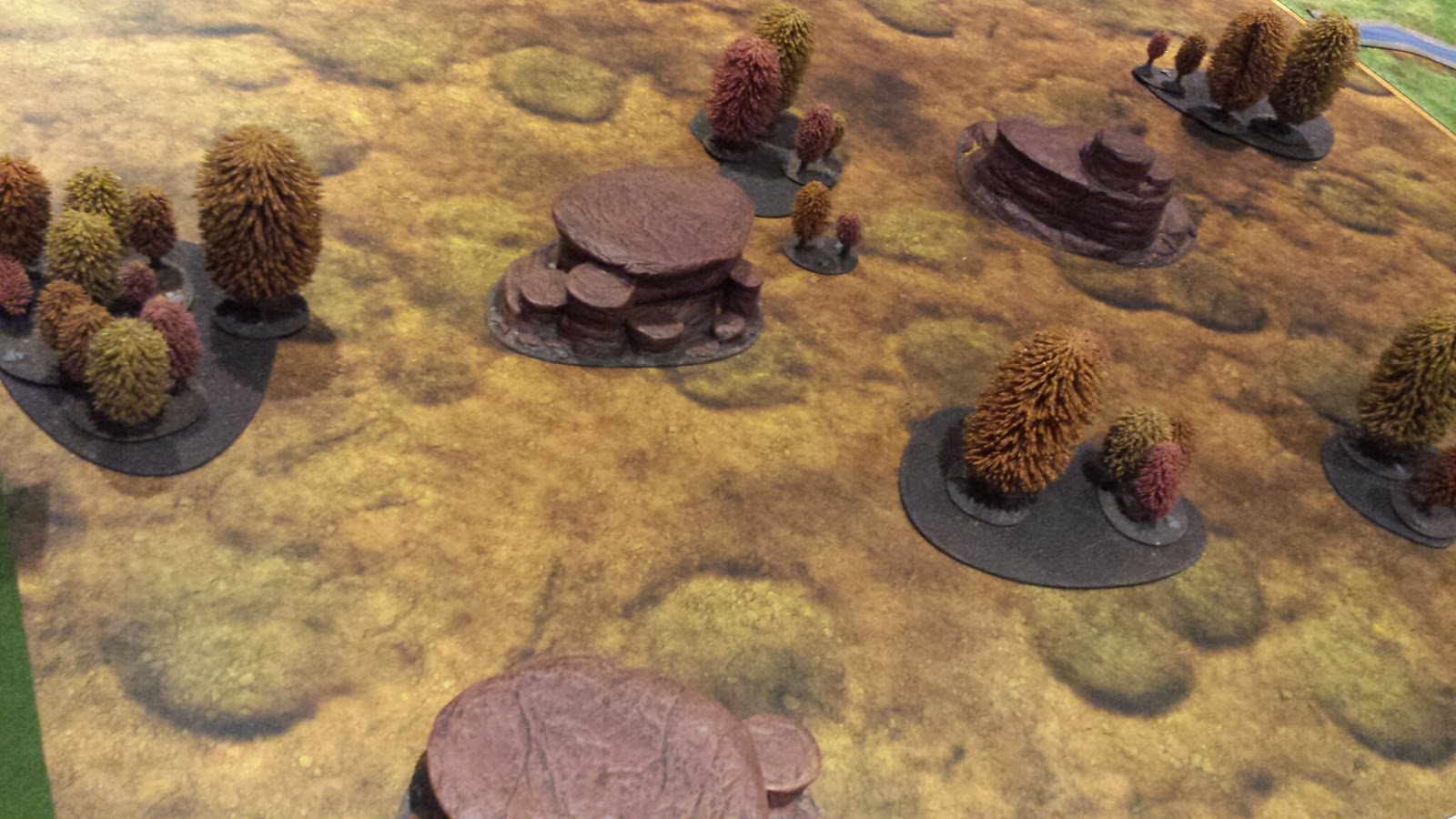 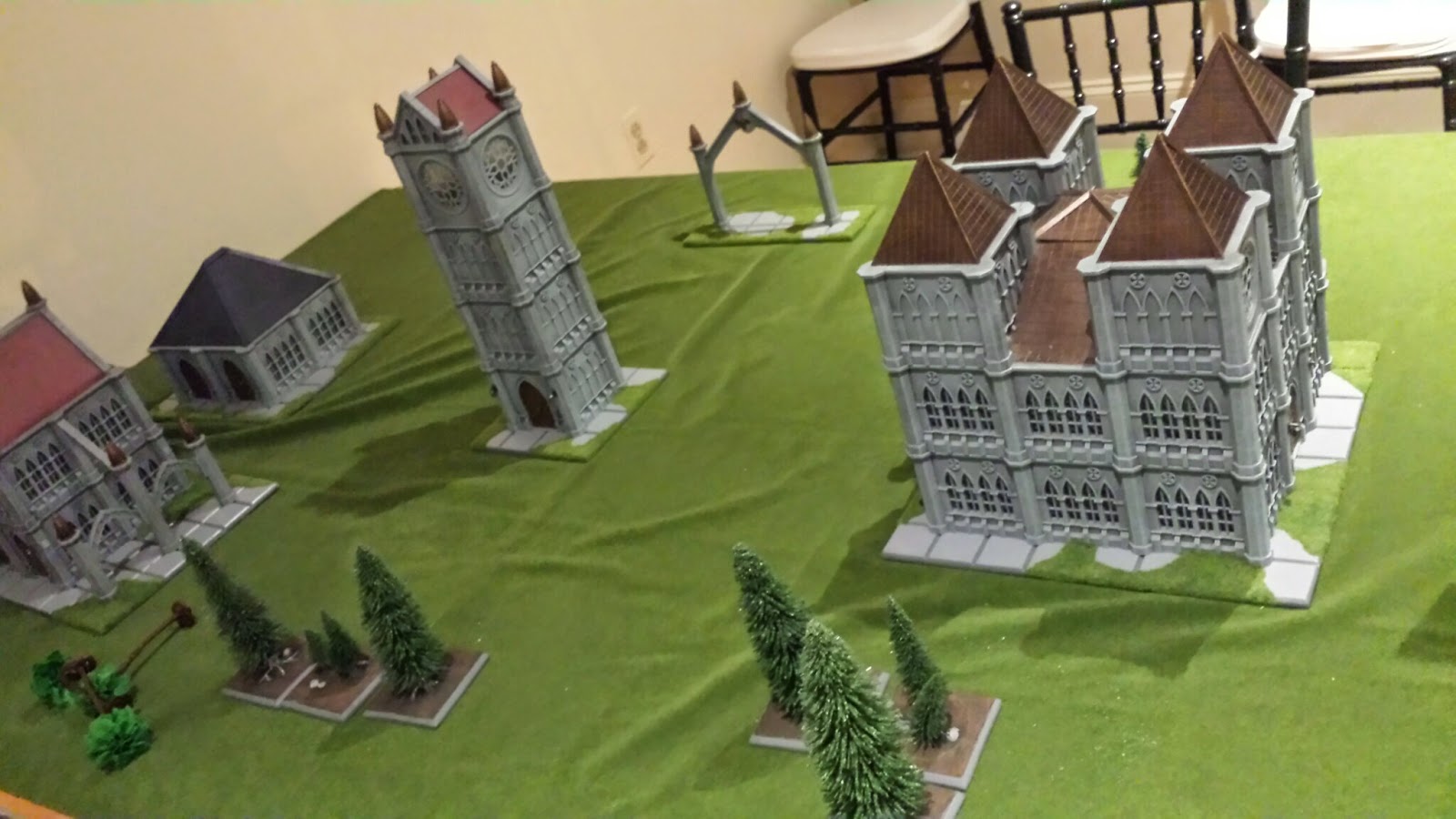 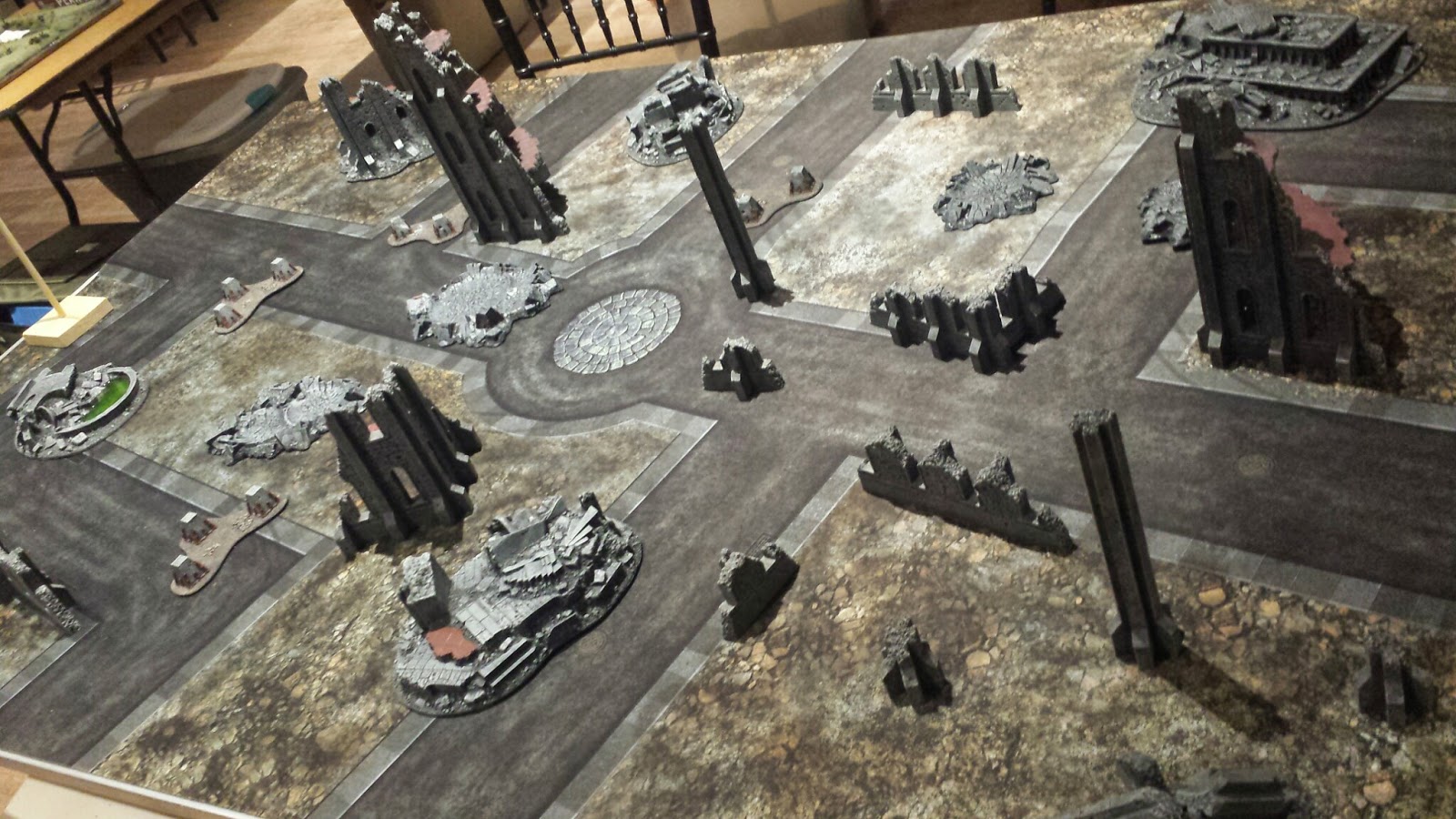 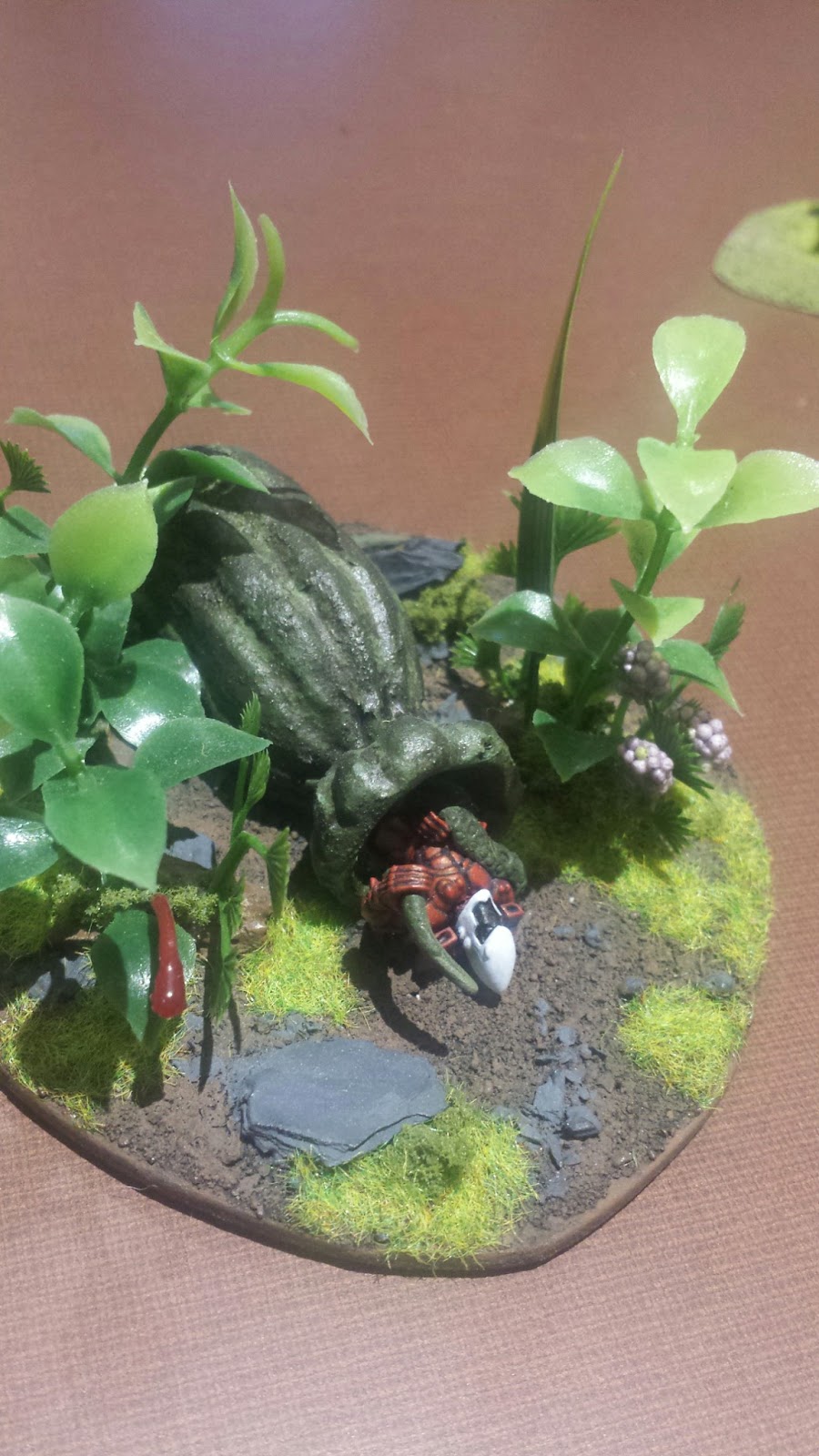 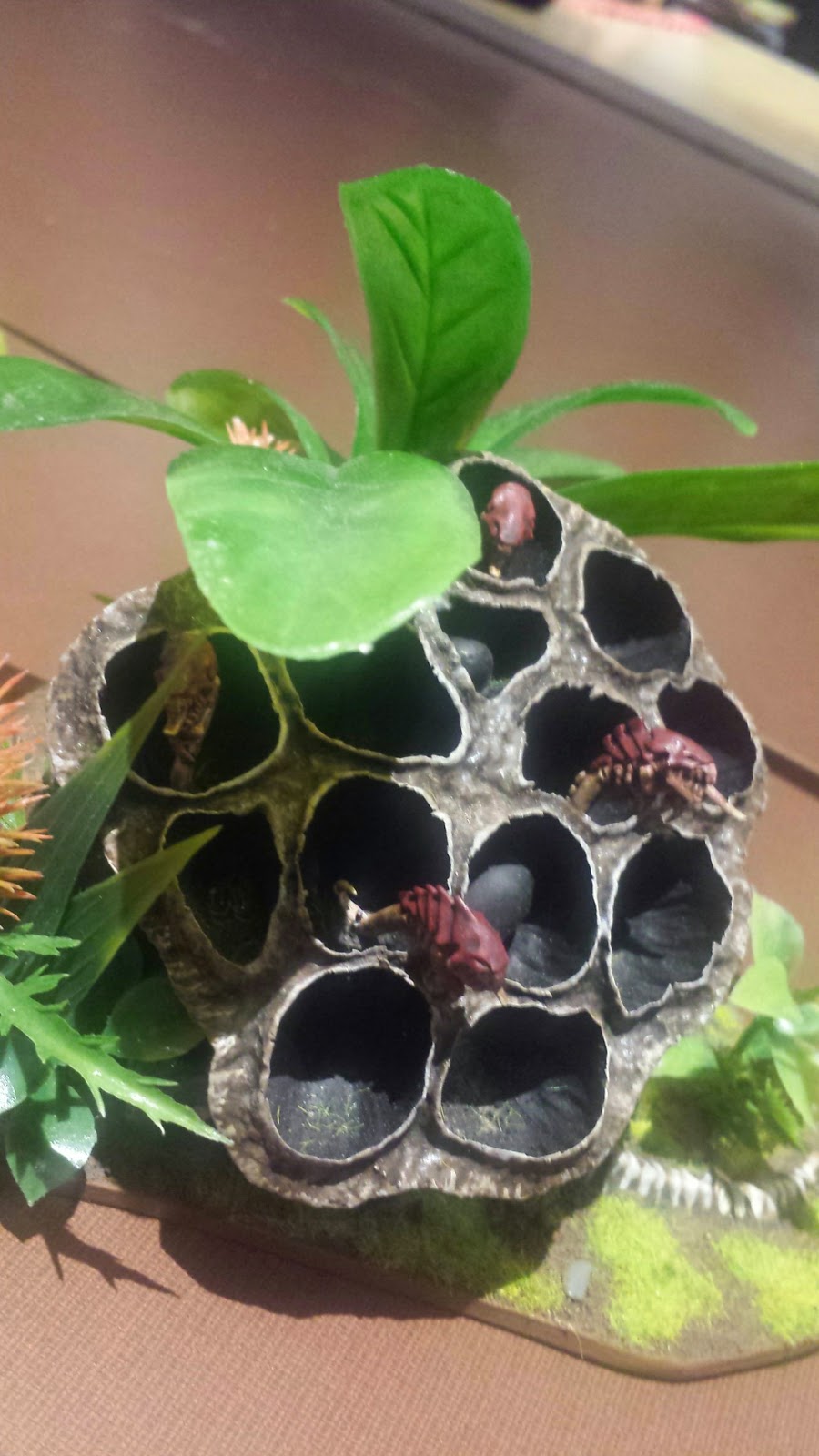 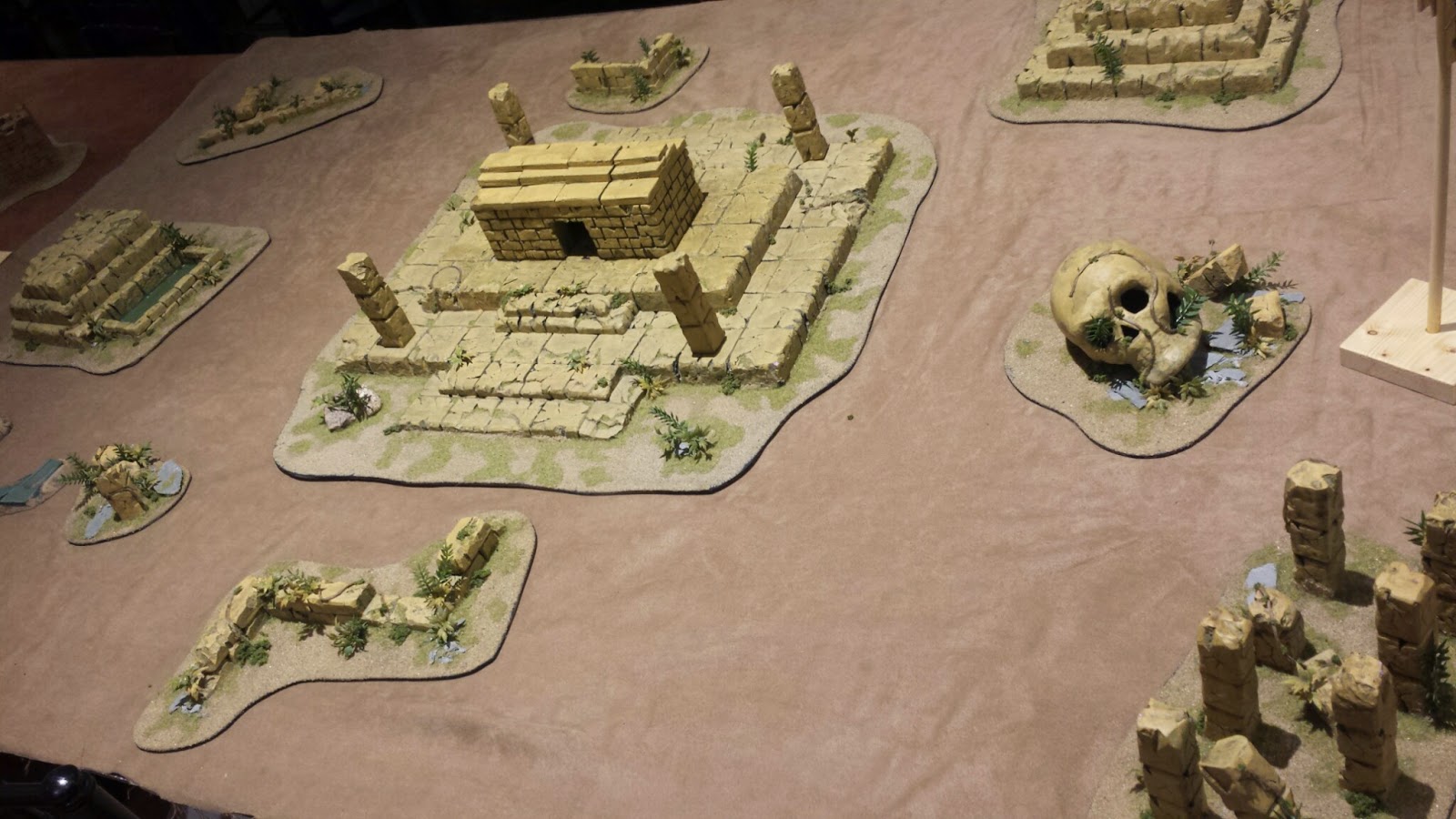 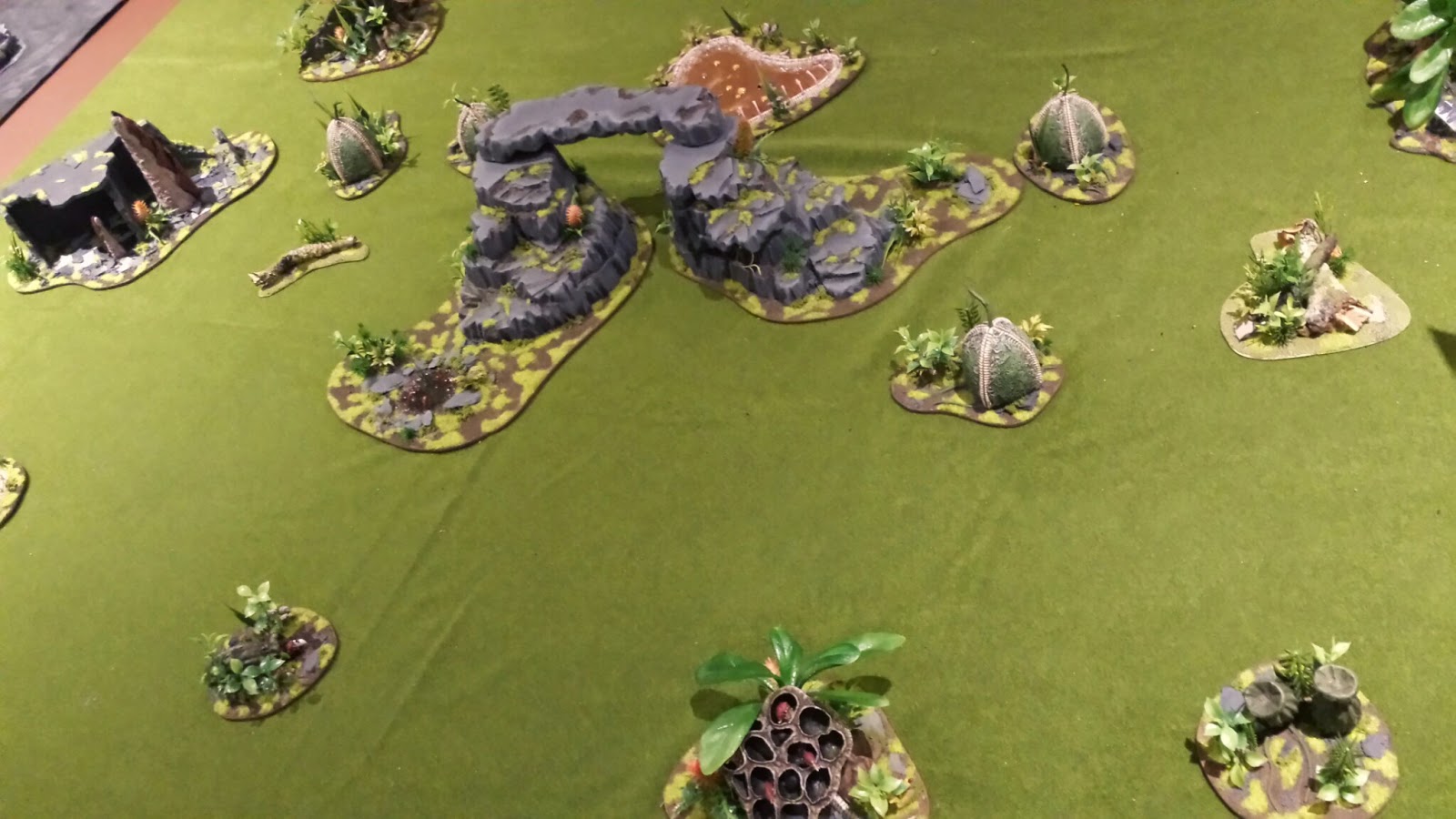