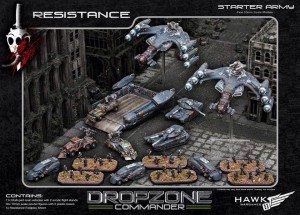 Cameron brings us a Dropzone Commander Video Battle Report – 1500 PHR vs. Allied Resistance – Land Grab. Check out the Tactics Corner for more great videos!
We played a Land Grab mission using some of the newly released Resistance units: the breaching drill, Freeriders, Zhukovs, and Occupation Veterans.
These new units are really interesting, and they add new dimensions and threats to the game! Freeriders especially add a new dynamic; I can’t remember ever playing a game where I made so many minigun, assault rifle, and magnum shots. Freeriders are very difficult to kill with a traditional anti-tank build… I think some current lists will find them very difficult to deal with.
Overall I’m really liking the Resistance faction. I think it is a very versatile faction with a lot of diverse and interesting builds, and all of the units I’ve played against so far seem well balanced.
As always, let us know how we can make these reports better! I apologize for the shakiness and low framerate that occur at times in this video.