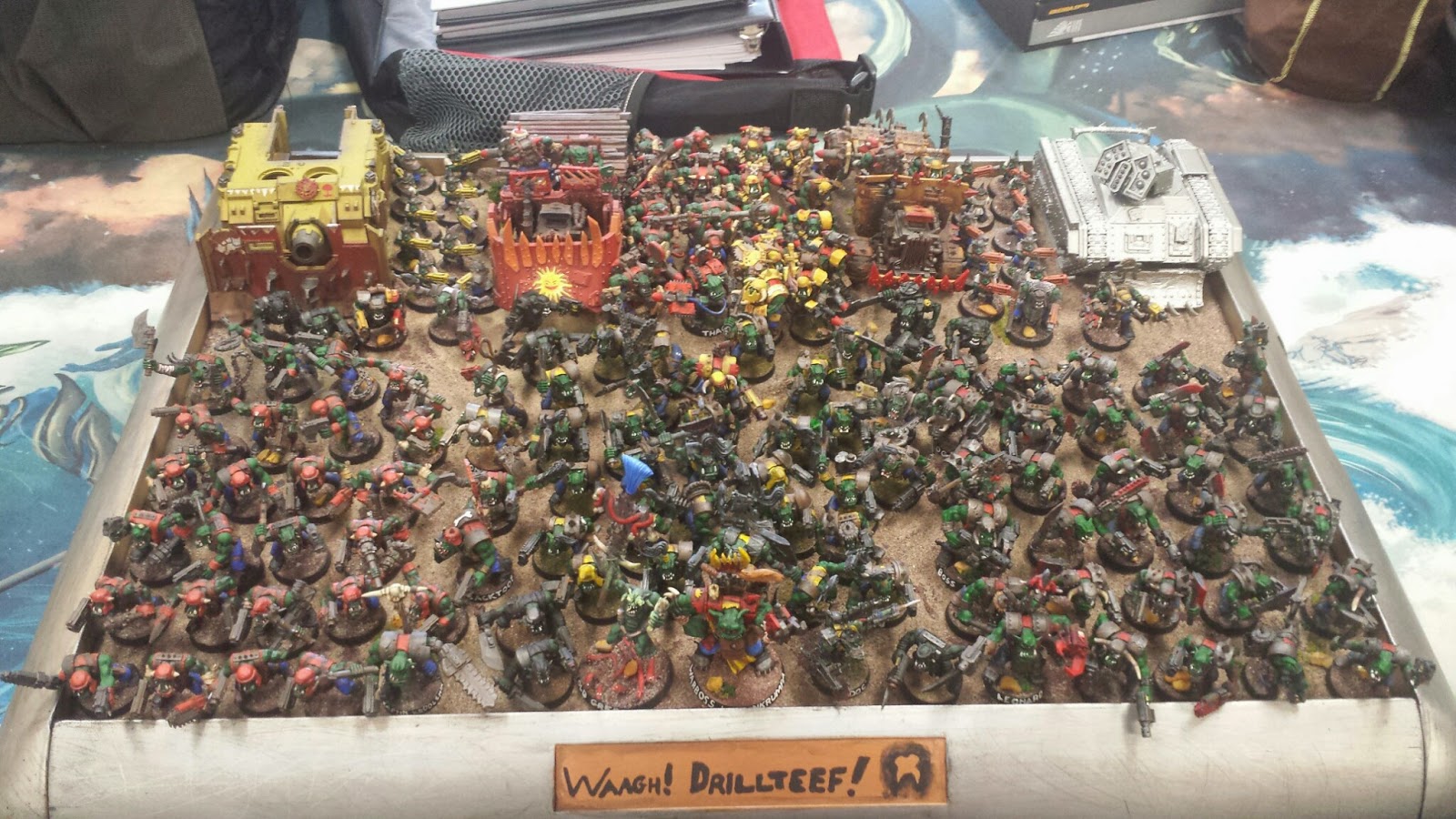 Once again I find myself at Dirty Goblin Games in Queensbury, NY for a fun tournament experience. I decided to try out the first concept for a list I would like to use at Da Boyz GT in November.  The Da Boyz list construction rules have an interesting and unique comp system which should be fairly well-known to everyone, but the essence is that Troops are unlimited, Dedicated Transports are 0-3, and all other units are 0-2.  Also, you are limited to a single Combined Arms Detachment, a single Allied Detachment, and Formations/Dataslates along with a 2-source maximum.

This is what I brought (or close enough that it doesn’t matter):

Basically, the Painboy and the Weirdboy go into the Green Tide.  The Weirdboy rolls on Sanctic Daemonology hoping for Hammerhand and/or Gate.  We get across the table and krump some ‘eads. The Tankbustas are there to ace out as many vehicles as possible early on to make the multi-assaults a little bit easier.

I don’t even remember which Warlord Trait I rolled, but I got Hammerhand for one of my Psychic powers, so I was as happy as a clam about that. 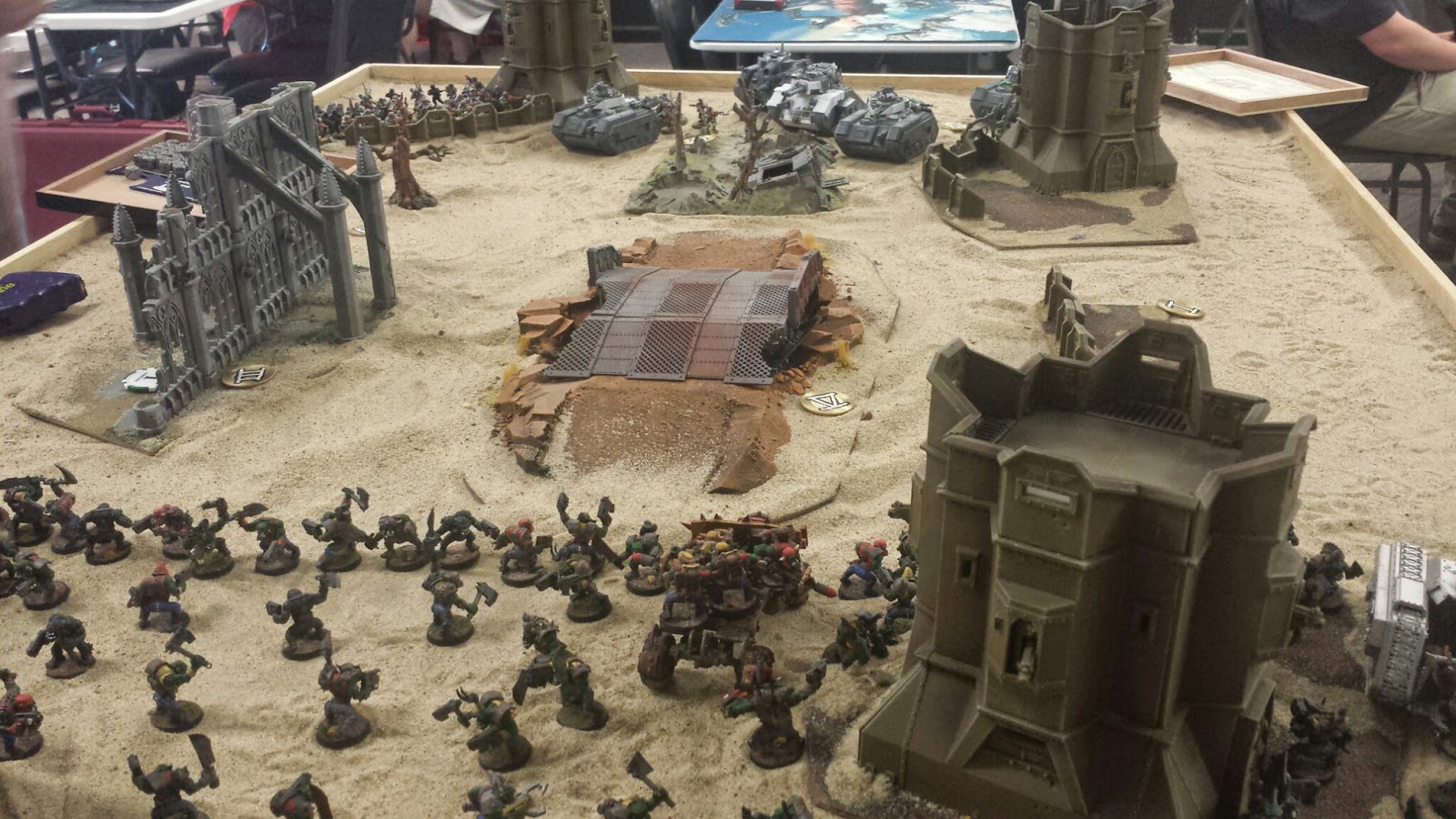 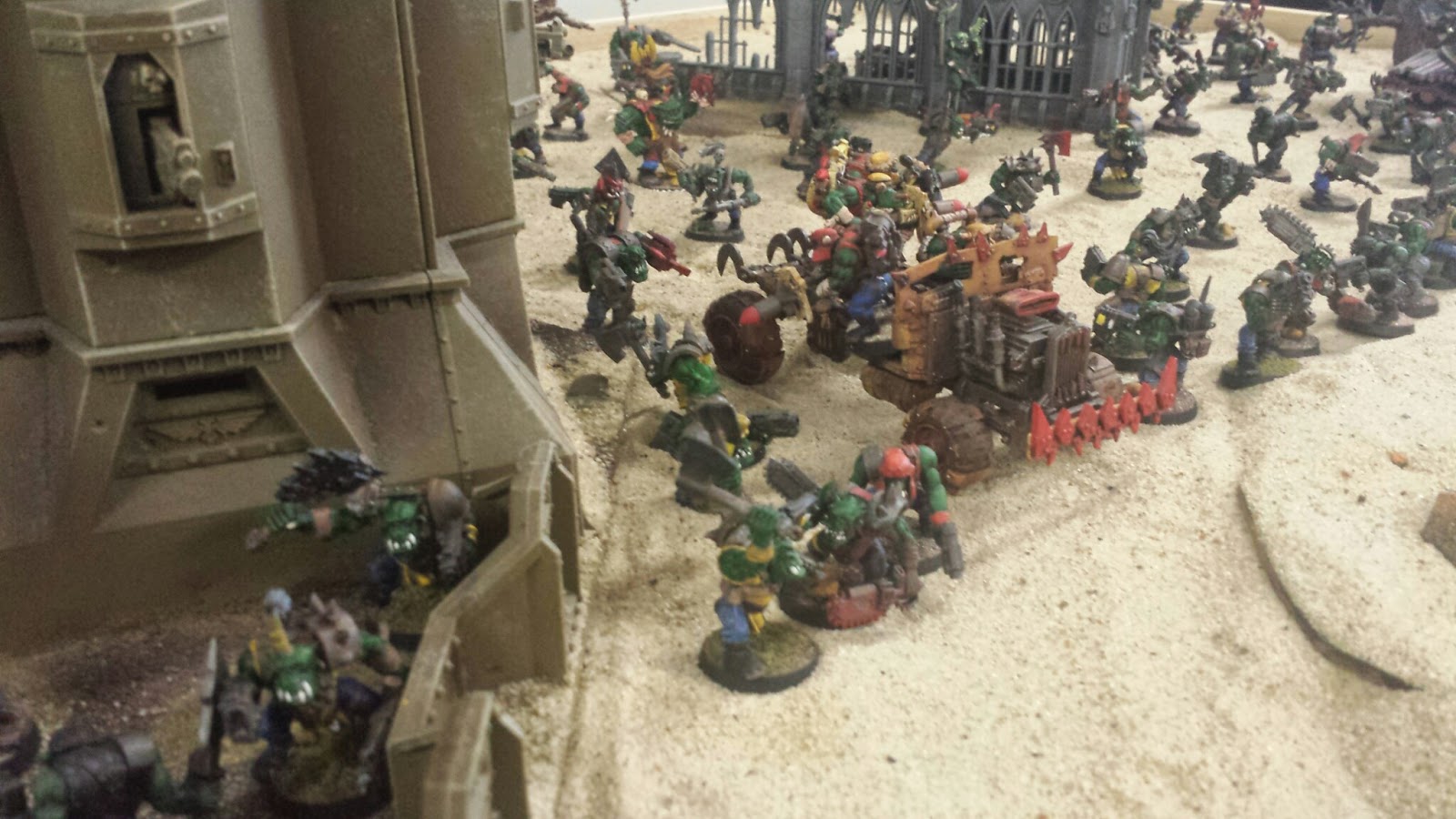 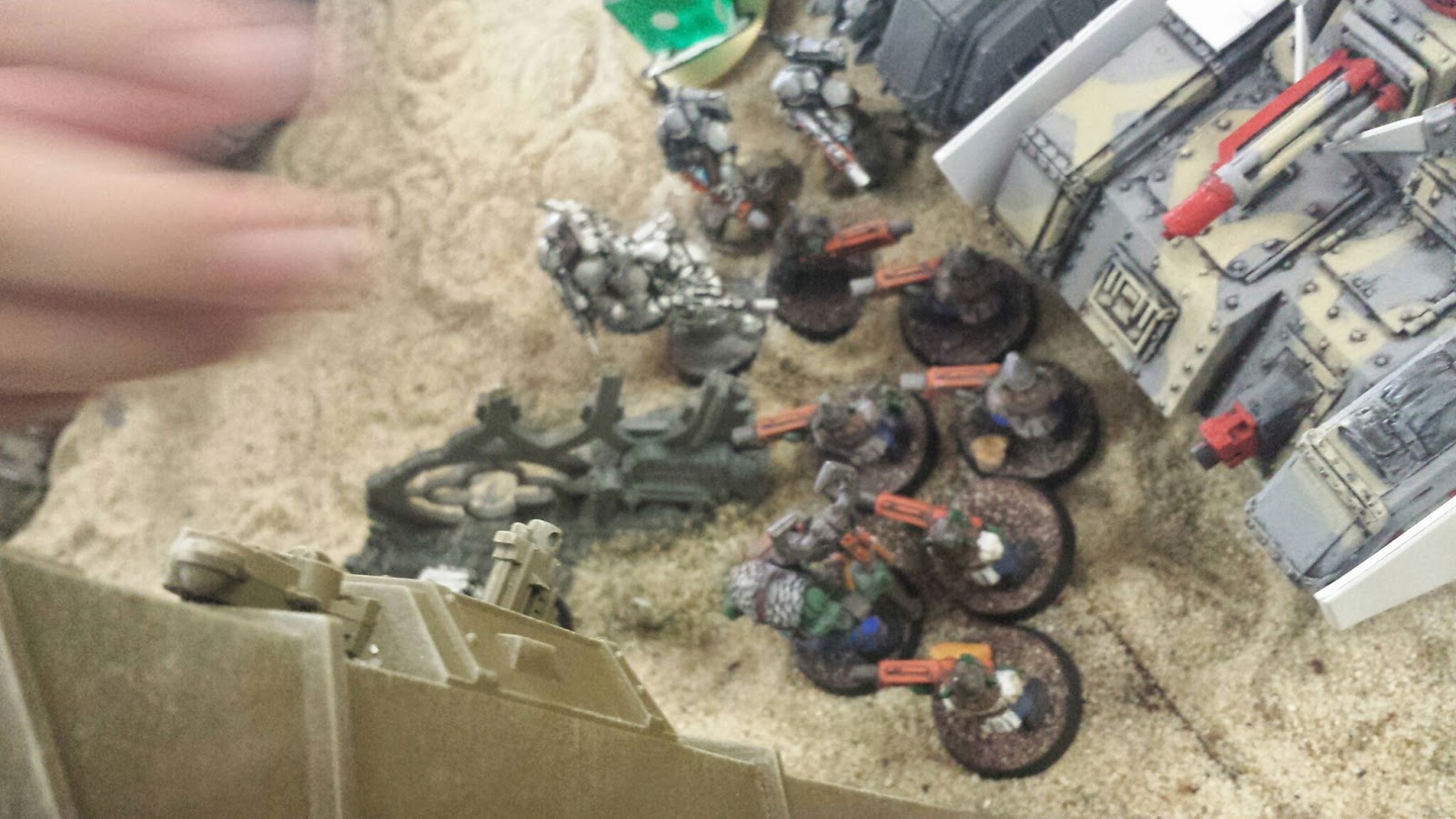 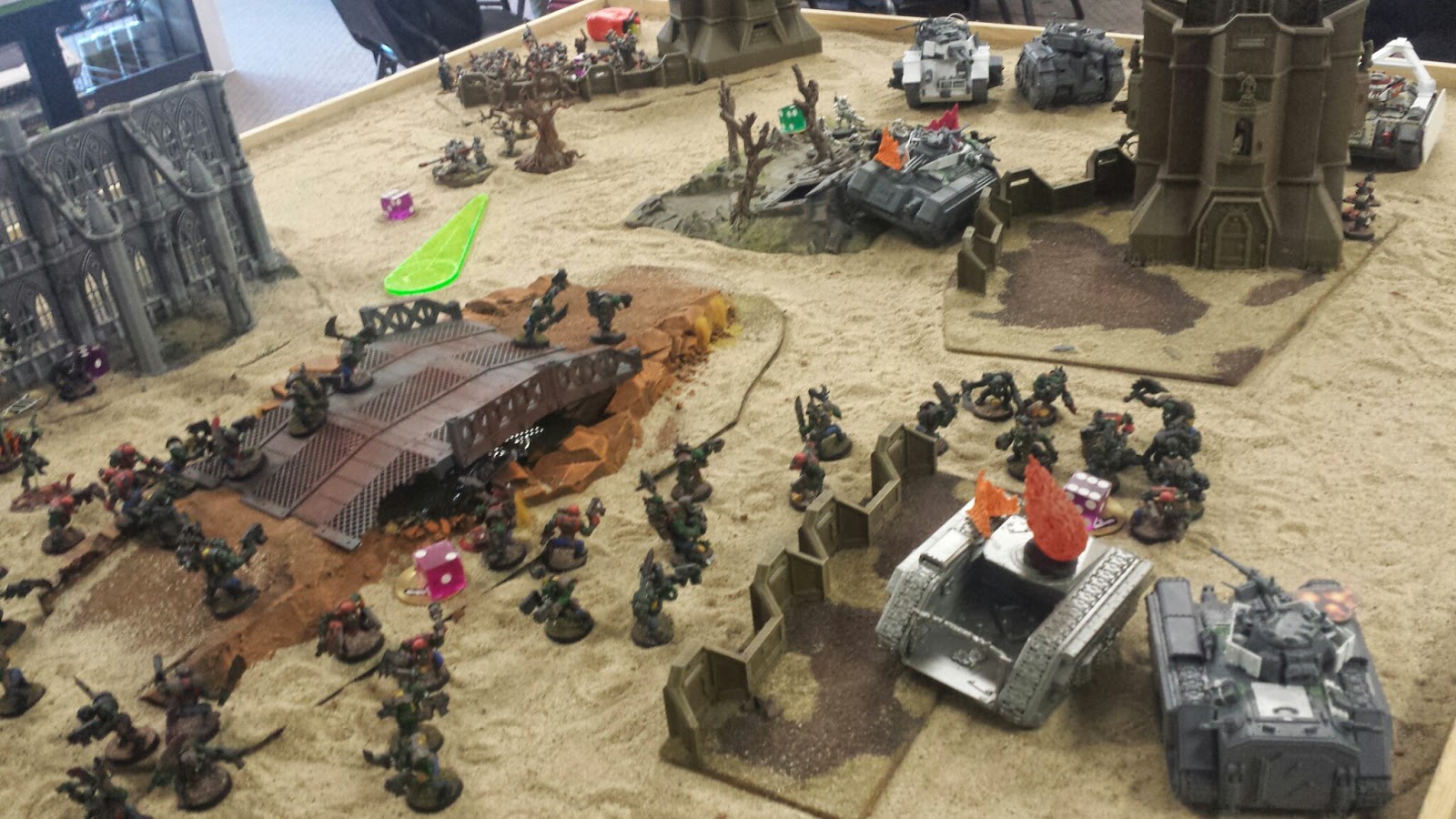 Although the game is fun and the end is glorious, we finish on Turn 5 and I am unable to make up the points for the win.

Primary Mission:  The Spoils of War

This time, I rolled abysmally on the Psychic table, but I did happen to draw the Strategic Warlord Trait which allows you to Infiltrate with your Warlord and three other units.  This resulted in a highly amusing deployment. 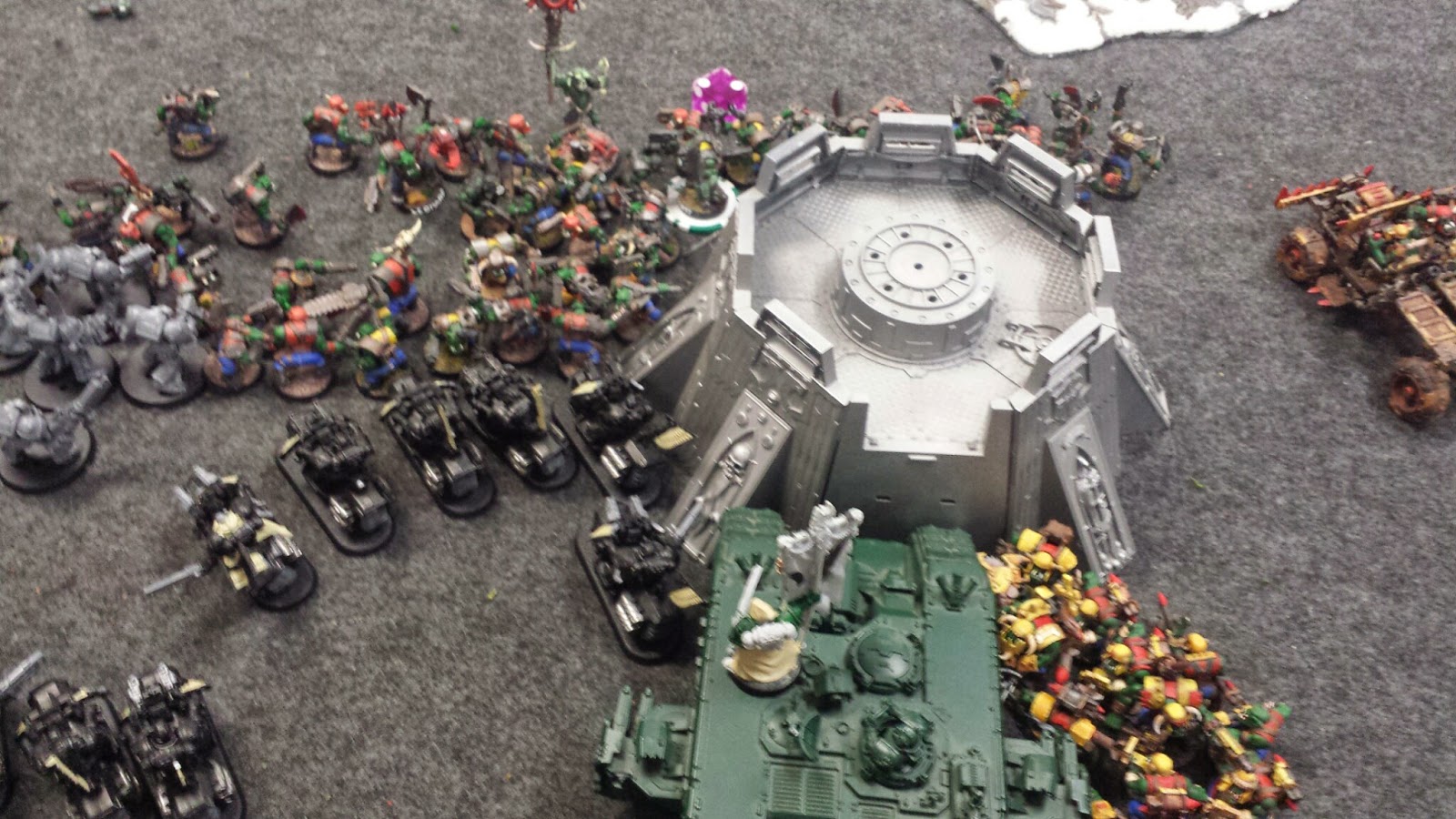 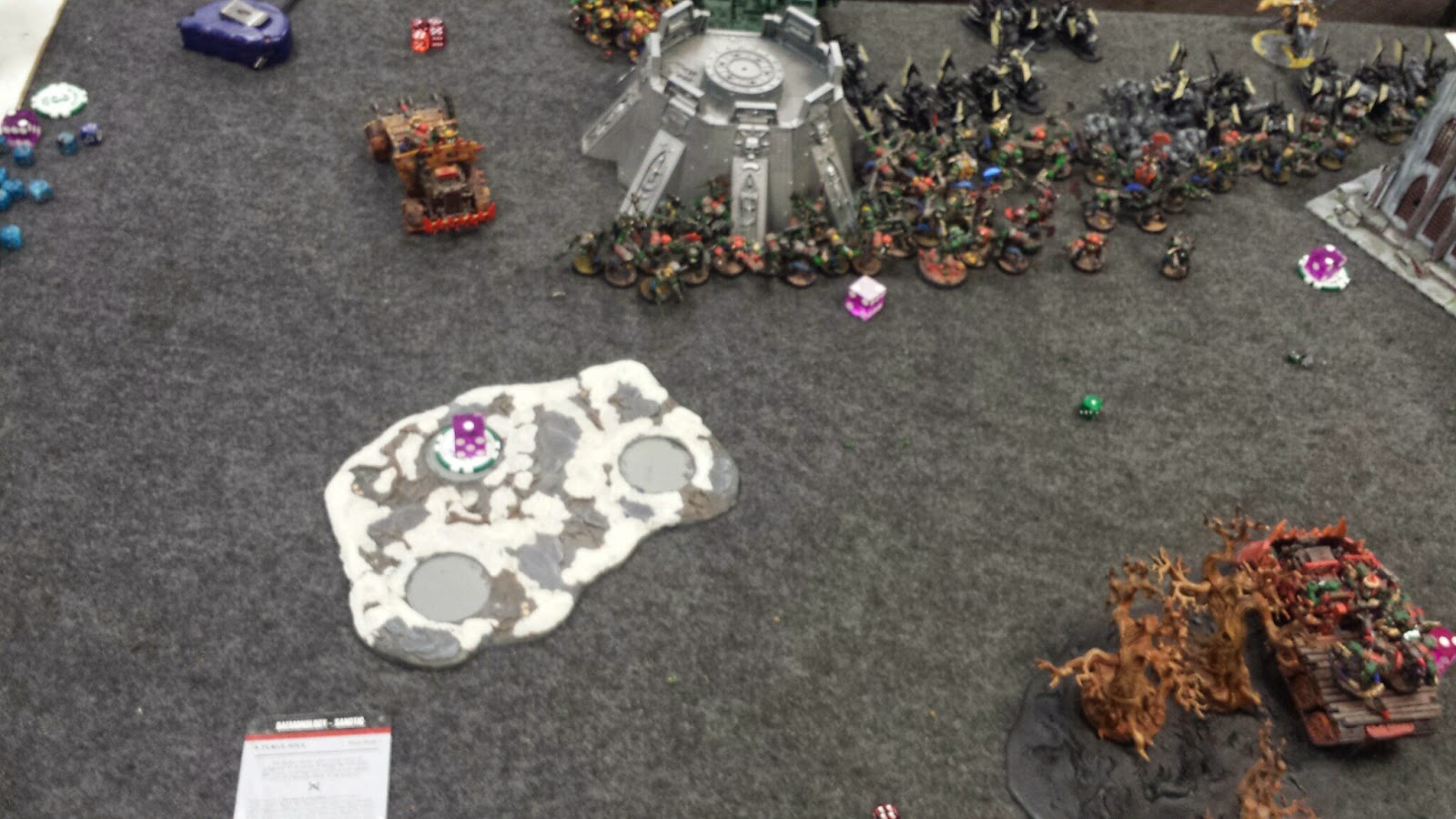 At the end of the game, my opponent was tabled, but the game was fun and crazy!

For this game, I was able to score Hammerhand again which was a great relief to me considering there were Wolf Cavalry on the other side of the table!

In the end, I won the game, but on secondaries, and took third place in the tournament.

Warlord Choice:  I used the Warboss in the Green Tide as my Warlord over a Warboss or Big Mek in the CAD with Finkin Kap because I think the WAAGH! on every turn is more important than 2 Strategic Traits with re-rolls.  I’m not so sure about this now as I think Infiltrating with the Green Tide could be much, much better than WAAGH! every turn, but at the same time I MUST take a CAD, so I’d probably end up losing the Weirdboy which is a tough sell at this point.  I may try a test game with a KFF Big Mek instead.

Saves:  The ‘Eavy Armor on some of the squads is a MUST, as is the Painboy.  If I were allowed multiple CADs, I’d honestly have 2 Painboys instead of 1.  As it is, I have to be very careful about where I place him.  The ‘Eavy Armor sprinkled around the squad really creates these great speedbumps where the wound allocation has a tendency to just stop dead in its tracks.

Da Boyz GT Format:  I sure wish I could take the Ork Horde Detachment or Ally with myself in this format so I could take a third HQ.  Orks can live or die by that extra character.  Well, I think the list has promise just the same.  I’m also trying to wrap my head around a Bike list built around the Bike Warboss from Imperial Armor 8 as they are also allowing any 1 40k-approved Forge World unit in your list.

Ask for Help:  If you ask your opponent to help you move models and remove failed dice rolls, your game will go very quickly and you’ll likely finish your games unless they also brought a blob list.

At any rate, thanks for reading!

Posted on October 9, 2014 by adam Fasoldt in 40K, Tournament report